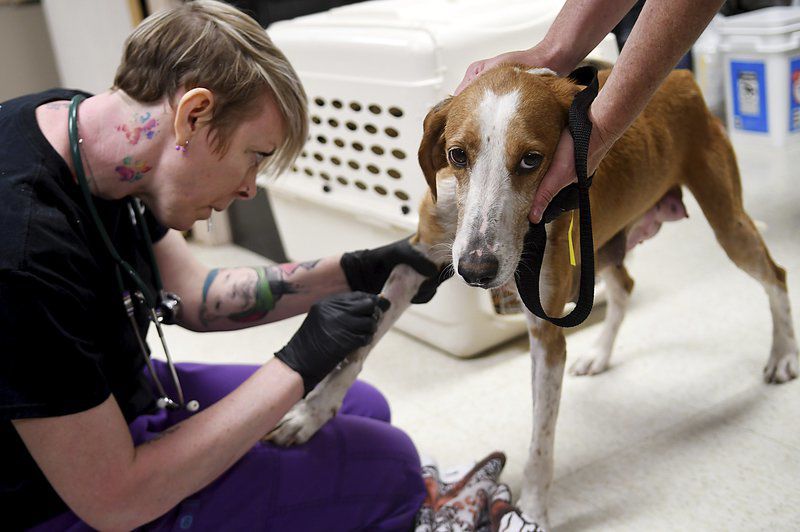 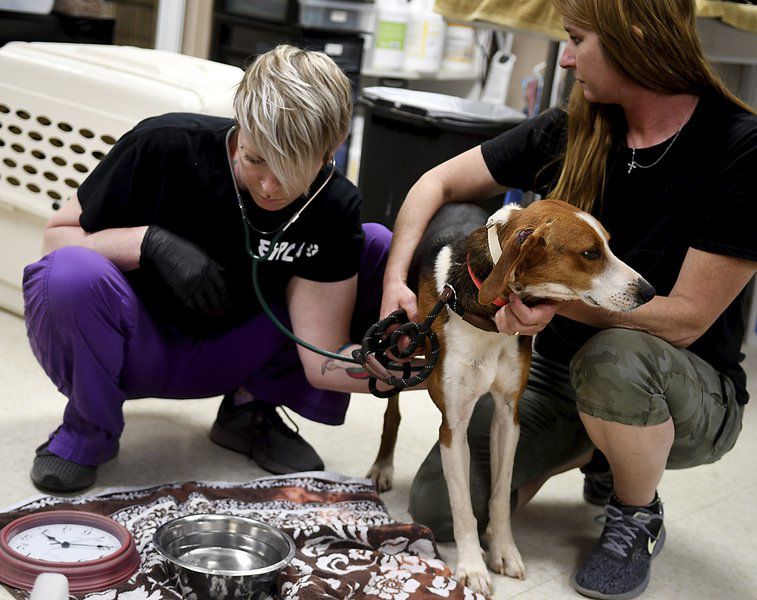 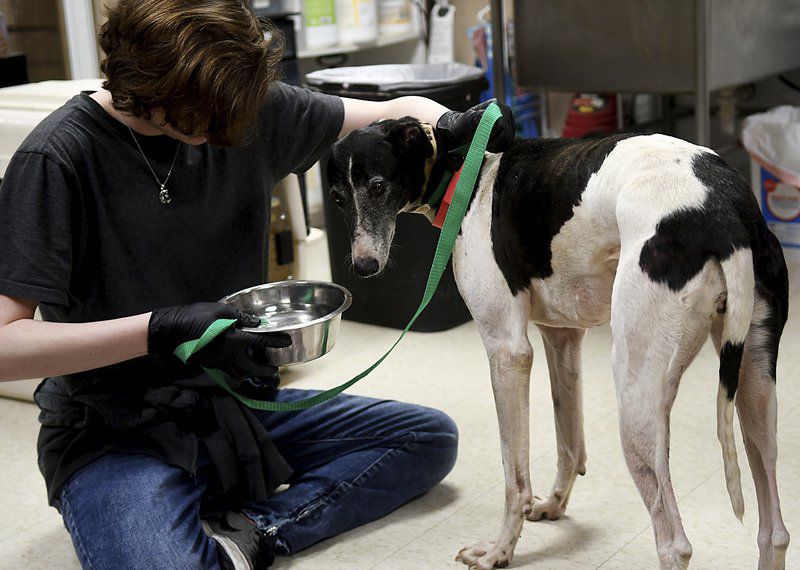 Justis Smith, an Enid SPCA volunteer, offers a drink to a greyhound after the dog was one of 23 rescued from a residence in Pond Creek on June 11. (Bonnie Vculek / Enid News & Eagle) 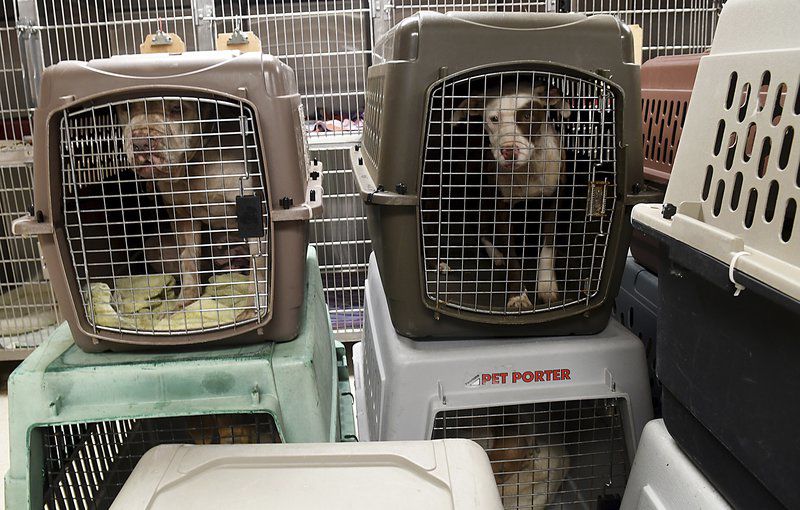 Justis Smith, an Enid SPCA volunteer, offers a drink to a greyhound after the dog was one of 23 rescued from a residence in Pond Creek on June 11. (Bonnie Vculek / Enid News & Eagle)

ENID, Okla. — A 69-year-old Enid man was charged Monday in Grant County with 23 felony counts of cruelty to animals and a warrant issued for his arrest.

Lloyd Eugene "Gene" Fore faces up to five years in prison, a $5,000 fine or both on each of the 23 counts accusing him of withholding proper and necessary food, water, shelter or veterinary care for 16 adult dogs and seven puppies.

According to an affidavit filed in the case, on June 1 Pond Creek Police Chief Michael Payne was contacted by a woman concerning a puppy she took to Pond Creek Veterinary Clinic.

The woman told Payne she was concerned the puppy may have ingested water, nearly drowning, according to the affidavit. The woman said she took the puppy to the clinic to get it help.

Payne went to 123 7th Street, where the puppy was found, to check on code violations he recently posted. Payne wrote citations for having too many dogs on the property and not having city tags for the animals, according to the affidavit. There were 16 adult dogs and six puppies, not including the one taken to the clinic.

The tall pot with the water in the pen with a mother and her puppies had been replaced with a smaller pan of water, according to the affidavit. This had been done by the woman who found the puppy.

Payne noted that several pens had weeds growing in them and needed to be cleaned of excess feces, according to the affidavit. Payne noted most of the dogs had raw and bleeding fly bites on their ears that did not appear to be receiving care.

Payne later spoke with Fore about the puppy, according to the affidavit. Payne told Fore he could pick it up from the veterinary clinic June 3. He also told Fore about the citations he mailed to him concerning the code violations.

Payne spoke with Fore June 3 and Fore said he went to the clinic to get the puppy but it was gone, according to the affidavit. Payne contacted the woman who made the report about the puppy, asking her to take the puppy to clinic so Fore could pick it up.

The woman called Payne later, according to the affidavit. She said she spoke with Fore about the puppy and he asked her to hold onto it for him so he could make a pen for it.

On June 6, Payne went to 123 7th on a report of animals at large, according to the affidavit. He found the mother and some of the puppies were back in the pen.

He found two of the puppies were running around and another one was in a pen with another dog, according to the affidavit. Payne called Pond Creek Assistant Chief Matthew Hankins and asked him to come to the property.

Payne and Hankins caught the two puppies and put them in a pen with their mother and got the last puppy and put it back in the pen with its mother, according to the affidavit.

"All the puppies started to chase the mother trying to feed off of her, but she did not appear to have any milk left," Payne wrote in the affidavit. "The mother was in bad looking shape, you could see her rib cage and her hip bones sticking out. She had raw fly bites all over her ears and what looked like other injuries."

The woman who made the initial report brought over water and food to the mother's pen at the police's request, according to the affidavit.

Payne checked the other pens on the property and there was no food, according to the affidavit. The water in the other pens was green from what appeared to be algae growing in it.

Payne obtained a search warrant for the property and it was signed and executed June 11, according to the affidavit. Pond Creek Officer Larry Porter and Reserve Officer David Gebers served the warrant accompanied by Enid SPCA workers Crissa Bullock, Linda Huddleston and Amy Ebel and veterinarian Dr. Stephen Chambers.

Payne was told 23 dogs were seized from the property due to health and safety reasons, according to the affidavit.

Vickie Grantz, director of Enid SPCA, said none of the dogs are aggressive, and they are responding to treatment. She said people could help out with donations for the dogs, since it has been a strain on the shelter’s resources to accept 23 dogs.

“Dog food is a great thing (for people to donate),” Grantz said. “In-house we feed the Authority adult and puppy dog food, and cash for medical treatment always helps.”

Grantz said signs violence or abuse against the dogs are a difficult thing to determine, but that the shelter does assess their physical health. At the time it is unsure when the dogs will be able to find permanent homes.

“We really don’t know (what’s next), that will be up to the DA’s office,” Grantz said.

Rains is police and court reporter for the Enid News & Eagle. Follow him on Twitter, @cassrains. He can be reached at crains@enidnews.com. Staff Writer Jordan Miller contributed to this report.

Twenty-three dogs were seized from a home in Pond Creek Tuesday morning, according to Enid SPCA workers called in by Pond Creek Police Department to help at the scene.