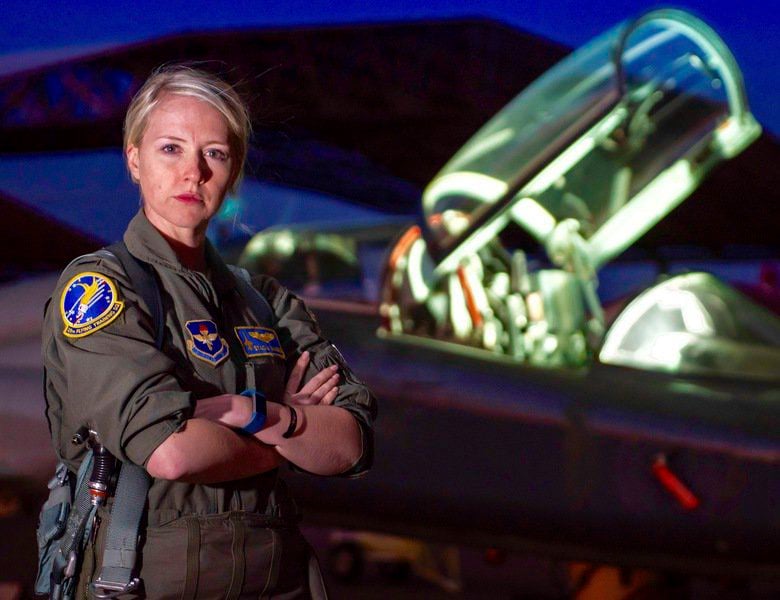 1st Lt. Stacia Madsen, an instructor pilot assigned to the 25th Flying Training Squadron, poses for a photo Feb. 27, 2020, on the flight line at Vance Air Force Base. 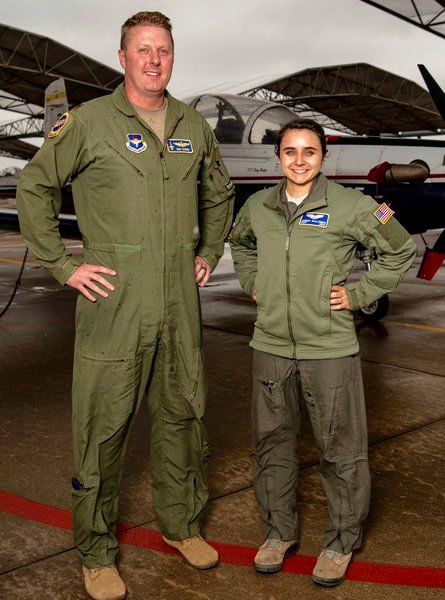 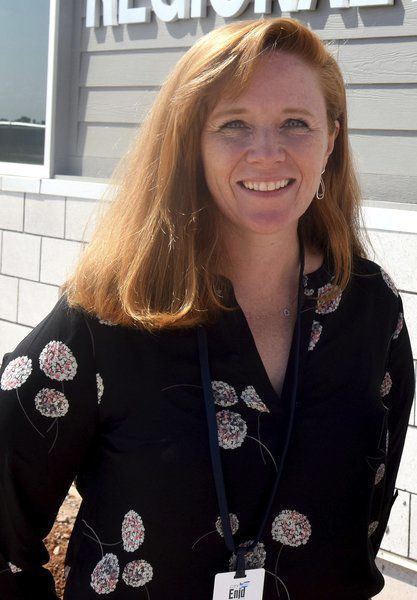 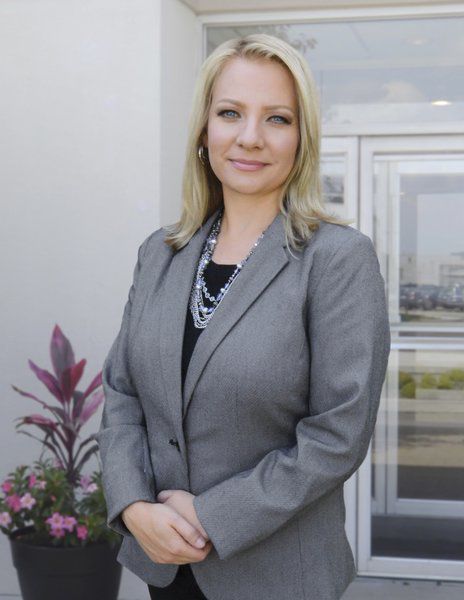 Suzanne Markle, president and CEO of Pittsburgh Institute of Aeronautics, recently was appointed to the newly-formed FAA Women in Aviation Advisory Board. 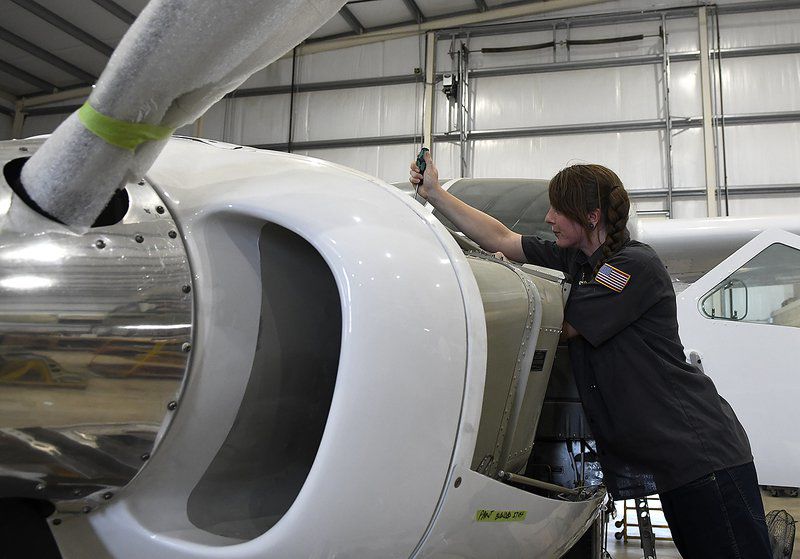 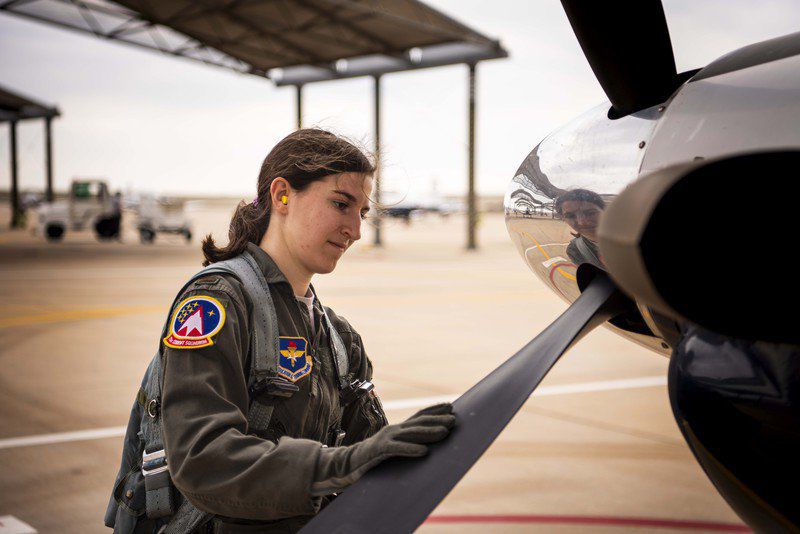 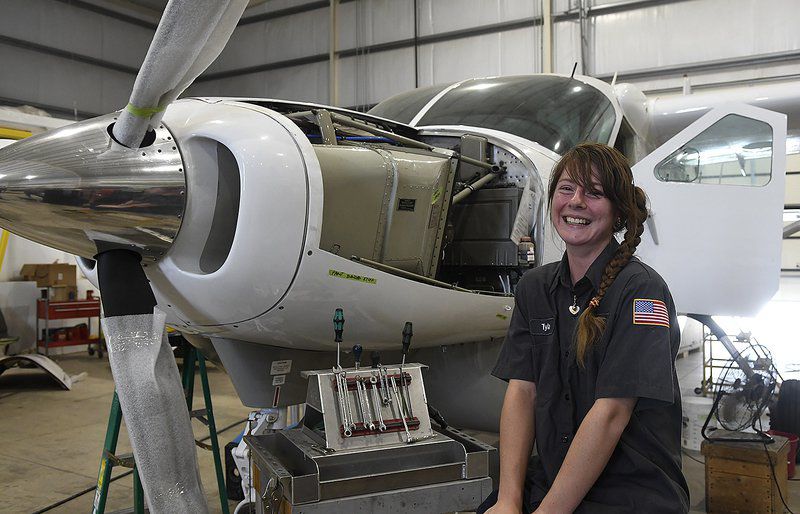 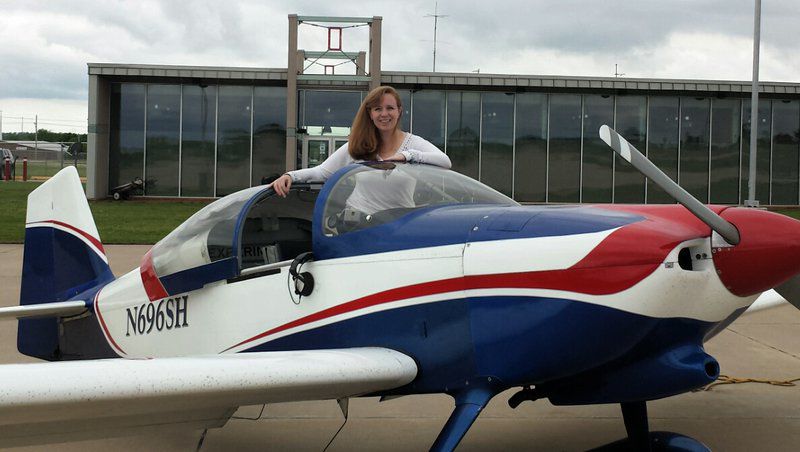 Deirdre Gurry appears in the cockpit of her Van’s RV6, which she flew to all 108 of Oklahoma’s public airports between December 2018 and April 2019.

1st Lt. Stacia Madsen, an instructor pilot assigned to the 25th Flying Training Squadron, poses for a photo Feb. 27, 2020, on the flight line at Vance Air Force Base.

Suzanne Markle, president and CEO of Pittsburgh Institute of Aeronautics, recently was appointed to the newly-formed FAA Women in Aviation Advisory Board.

Deirdre Gurry appears in the cockpit of her Van’s RV6, which she flew to all 108 of Oklahoma’s public airports between December 2018 and April 2019.

VANCE AIR FORCE BASE, Okla. — As the civil aviation industry grows, and as the Air Force faces a persistent pilot shortage, recruiters in industry and military alike are looking to a relatively untapped pool of qualified candidates — women.

According to the Air Force and FAA, only about 6% of pilots in the Air Force, and in the aviation industry overall, were women in 2019. Outside the cockpit, women are even more underrepresented in aviation-related fields — in 2019 women accounted for only 5.5% of aviation repairers, 4.3% of flight engineers and just 2.5% of certified aviation mechanics. About 1 in 5 air traffic controllers are women.

Across the Air Force, opening more training seats to women has become an important part of the overall strategy to increase pilot production, and fill more open seats in operational cockpits.

Col. Corey Simmons, then-commander of the 71st Flying Training Wing at Vance Air Force Base, told the News & Eagle in a June statement increasing gender equity among pilots is essential to the health of the overall force.

“You are as strong as you are diverse,” Simmons wrote in a provided statement. “When you have a group of people who think independently, but are working toward a common goal — you will always reach success.”

In order to attract more women to flight school, the Air Force has increased waivers for some criteria, especially for height, that previously excluded many female applicants.

“By creating more opportunities for women to become aviators, we are only building a stronger force,” Simmons wrote. “Women have been making strides in aviation since WWII, with the WASP initiative, and there is no reason to slow down now. “

Maj. Gen. Craig Wills, 19th Air Force commander, announced the increase in height waivers last November. The waivers also apply to men who are taller than the maximum height, but are more targeted to female applicants.

“Don’t automatically assume you don’t qualify because of your height,” Wills said in an Air Force release. “We have an incredibly thorough process for determining whether you can safely operate our assigned aircraft. Don’t let a number on a website stop you from pursuing a career with the best Air Force in the world.

“Some people may still not qualify,” Wills said. “But, the Air Force is doing everything that we can to make a career in aviation an option for as many people as possible. The waiver process is another example of how we can expand the pool of eligible pilot candidates.”

Outside the military, the aviation industry is turning to trade schools and colleges, to reach more women before they enter the workforce.

Suzanne Markle, president and CEO of Pittsburgh Institute of Aeronautics, recently was appointed to the Department of Transportation’s newly formed Women In Aviation Advisory Board, which has the goal of better informing young women about opportunities in aviation.

“The Aviation industry represents one of the world’s largest infrastructures and provides some of the most rewarding and lucrative careers available. Therefore, no group should be underrepresented,” Markle said in a press release. “I believe there is much we can do to encourage women to explore these opportunities and to identify and remove barriers to their success.”

In an interview with the News & Eagle, Markle said aviation-related companies are eager to hire qualified applicants — regardless of gender.

“We have industry partners begging us for new graduates,” Markle said. She said most students in the aviation program at PIA have five or six job offers before they graduate.

Markle said she hopes to use her position on the advisory board to “connect these opportunities in the aviation industry with young women, who may not have been told what an incredible industry this is to get into.”

But, in order to connect women with career opportunities overwhelmingly filled by men, Markle said old-school, face-to-face recruiting and mentorship is needed.

“The majority of our female students heard about this program from one of our representatives visiting their school,” Markle said. “That’s what it takes.”

Deirdre Gurry, a retired Air Force lieutenant colonel, former squadron commander at Vance and current director at Enid Woodring Regional Airport, said it was that kind of direct engagement that drew her to a career as a pilot.

Growing up in a rural area of Pennsylvania, Gurry said she didn’t even consider flying as an open career for young women.

“I remember thinking it would be really cool to work on airplanes,” Gurry said. “It never crossed my mind to talk to the pilots, because of being a woman and from a small town — I didn’t think it was an opportunity for me.”

It wasn’t until a mentor in Air Force ROTC encouraged her to submit her application for the pilot track that she saw it as a possibility.

Now, as a retired Air Force officer and active private pilot, Gurry encourages young women to pursue careers in aviation — and not just in the cockpit.

“There are so many opportunities available — in maintenance, mechanics, ground support and air traffic control,” Gurry said. “It is a shame most women don’t know these opportunities are available to them. Aviation is a growing industry, and there are a lot of companies looking for qualified candidates to fill open positions, and if more women knew those positions are open to them, it would be tremendous.”

Tyla Oborny, who currently is the only woman repairing Cessna Caravan aircraft at the Aircraft Structures International Corp. (ASIC) hangar in Enid, said she had been interested in aviation since watching the Navy’s Blue Angels fly at an air show in Colorado.

After graduating from high school in 2014, Oborny moved to Enid and started working in a thrift shop. It wasn’t until a friend pointed out a newspaper article about Autry Technology Center’s aircraft sheet metal course, which feeds directly into a job at ASIC, that Oborny saw a path to work in aviation.

The seven-week class, airframe structures technology, has been offered since 2015. In the five years since, only four women have enrolled in the course to pursue a job at ASIC.

Oborny said it did not take long to overcome her hesitation about entering a predominantly male work force.

“When I first signed up, I thought it was going to be pretty difficult, because it’s something I’ve never done before,” Oborny said. “But once I got started, it was pretty easy to catch up and learn everything.”

Now, Oborny said it doesn’t make that much difference being the only woman on the job.

“It doesn’t really occur to me unless it’s pointed out, and then I think, ‘Wow I am the only girl,’” Oborny said with a laugh. “I get treated like all the guys, and we have fun while we work. We get our jobs done, we go home at the end of the day and come back the next day to do it again.”

Marty McCaslin, chief operating officer at ASIC, said the few women who’ve come to work there have been great assets to the company.

“We’ve found in the past that hiring women for mechanics’ positions — they tend to be a lot more detail-oriented, which is very good for this job,” McCaslin said.

Oborny said she likes the small details of her work, and she gets a sense of satisfaction every time an airplane leaves the ASIC hangar, its repairs complete.

“My favorite thing about the job is knowing I make a difference in people’s lives,” she said. “When somebody flies an airplane, I can be proud that I worked on that, and knowing it flies and does what it’s supposed to do, and the process of getting it up and in the air was successful.”

Haley said if that can help the company tap into half the population currently underrepresented in ASIC’s applicants, “that would be amazing for us.”

“The more qualified candidates we can get in any job posting, it’s just going to make our classes more successful,” Haley said. “Raising our diversity always makes us stronger.”

Brady McCullough, Autry Technology Center CEO and superintendent, said Autry is working to increase the number of female applicants to the ASIC course.

“We are absolutely looking for more female applicants for the ASIC paid training program,” he said. “The few female applicants we have had in the program chose this career path because of their interests and abilities. These individuals have not let their gender influence their decisions to prepare for non-traditional careers.

“Women are tremendous assets in a trade industry such as aviation maintenance,” McCullough said. “Aviation maintenance is an excellent career choice for women, and we hope to see more female applicants in the future.”

Oborny encouraged other young women to look for career paths in aviation, and other male-dominated fields, and to not allow traditional gender roles to stand in their way.

“I would say keep an eye out and really look for what you have passion for,” she said. “Don’t let it discourage you — just because it’s a guy thing, doesn’t mean girls can’t do it too. Just give it your all.”

ENID - A Private Service for Mary N. Donaldson, age 94, of Enid will be Monday, August 17, 2020, at 2:00 pm at Ladusau-Evans Chapel. Burial will be at Waukomis Cemetery under the direction of Ladusau-Evans Funeral Home.

ENID - The family of Larry Murray will hold a private memorial service at a later date. Cremation arrangements under the direction of Henninger-Hinson Funeral Home. Donations to St. Jude Children's Hospital through the funeral home. www.enidwecare.com