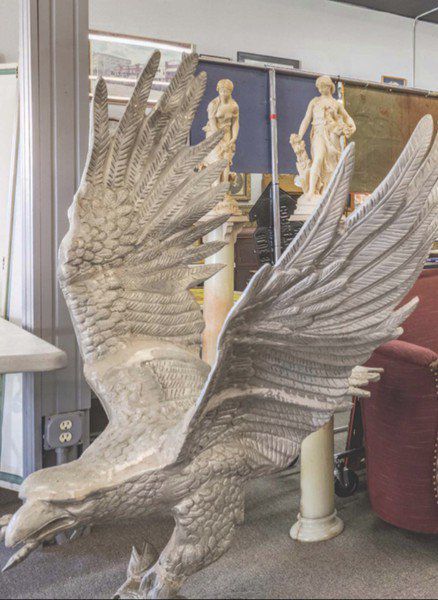 This eagle statue, part of the Bill and Marilyn Humphrey estate, once was on top of a building in the 200 block of West Broadway in downtown Enid. (Photo provided) 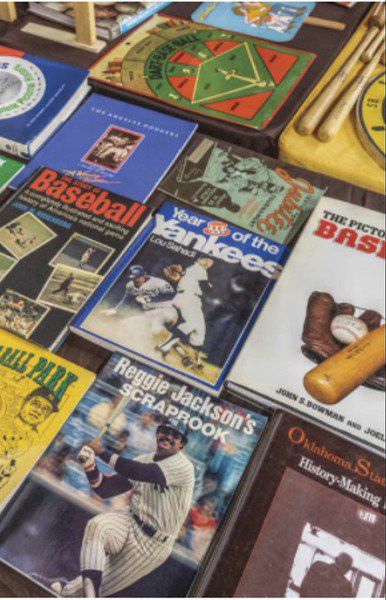 Baseball enthusiasts will have a lot of memorabilia to look over at the Bill and Marilyn Humphrey estate sale. (Photo provided)

This eagle statue, part of the Bill and Marilyn Humphrey estate, once was on top of a building in the 200 block of West Broadway in downtown Enid. (Photo provided)

Baseball enthusiasts will have a lot of memorabilia to look over at the Bill and Marilyn Humphrey estate sale. (Photo provided)

Bill Humphrey came by his love of history and collecting honestly, and, some would say, almost genetically.

His father and grandfather had held the family’s heritage together by keeping and storing a variety of things important to them, and they became important to Bill and his wife Marilyn. Boxes were moved from household to household to empty third-floor rooms more than once.

And now that collection is all in one 5,000-square-foot space, ready for inspection. The scope and diversity is worth the drive to Oklahoma City.

In 1993, as Enid prepared to celebrate the centennial of the Cherokee Strip Land Run, Bill Humphrey was front and center as mayor of Humphrey Heritage Village. Each building had been carefully sought out, moved and refurbished.

The schoolhouse had period school desks installed. The Glidewell House had 1890s furniture, books, china and quilts in place, all under the careful watch of Bill, Marilyn and Mary Ann Potter. Even the wallpaper was researched.

That year, Bill was president of the Sons and Daughters of the Cherokee Strip and wrote this in the 1993 journal, “There is a great crescendo of excitement among those anticipating this celebration, much as it must have been among those waiting for The Run.

“It means there is great appreciation, admiration and affection in our minds and hearts as we re-live not only the Run, but all that has transpired in the 10 decades since. They had little assurance that ‘anything good’ was in store for them. No wonder the possibility of having a new start with land of their own, and the chance for a future thrilled their souls and made their hearts beat faster ... Perhaps there is guilt in us as we enjoy the comforts of 1993, wondering if we could have met the tests of endurance they faced. We would probably perform as they did ... at least, we would like to think we would have. And there wouldn’t be one of them who would deny us any of the enjoyments that we have ... They came with stake in hand, with an exuberance and determination to survive, and, if they had the chance to ‘view’ today, I believe there would be a thunderous endorsement of approval for ‘carrying on’!”

The scope of Bill and Marilyn’s collection reflects their love of children (toys and dolls of all sorts and all decades); their love of family gatherings (pottery, china and glassware); anything and everything baseball (at all levels and from across the nation); automobiles (Packards were their favorites); furniture from his grandmother and great aunt (love seats, comfy chairs, unique tables); most anything to do with oil and gas companies (signs of all sizes, containers of all sizes, pumps and globes); Native American artifacts, paintings and drawings, clothing items (beaded moccasins, beaded dresses, beaded pouches); and coins.

FAIRVIEW [mdash] Graveside services for Thelma I. Parkins, 98, will be at 1:30 p.m. Tuesday, Jan. 21, 2020, at the Fairview Cemetery west of Fairview. Pastor Dennis King will officiate. Arrangements by Fairview Funeral Home Inc.