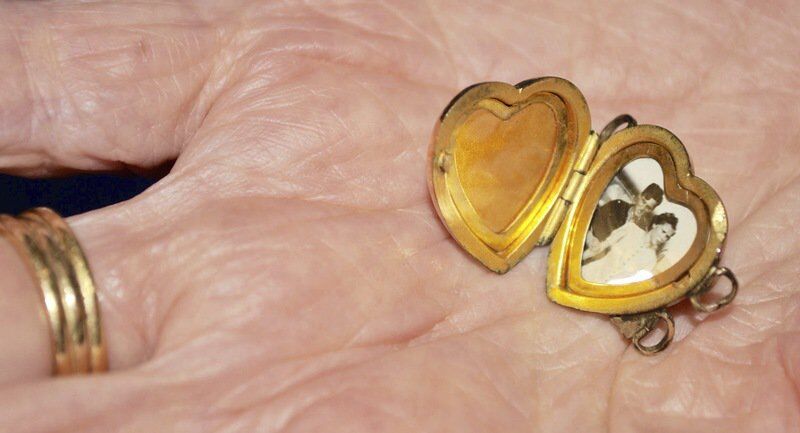 Millie Fussell holds a locket bearing an image of she and her husband Virgil Fussell. The Fussells were recognized Monday, Oct. 12, 2020, as Oklahoma's longest-married couple after more-than 78 years of marriage. 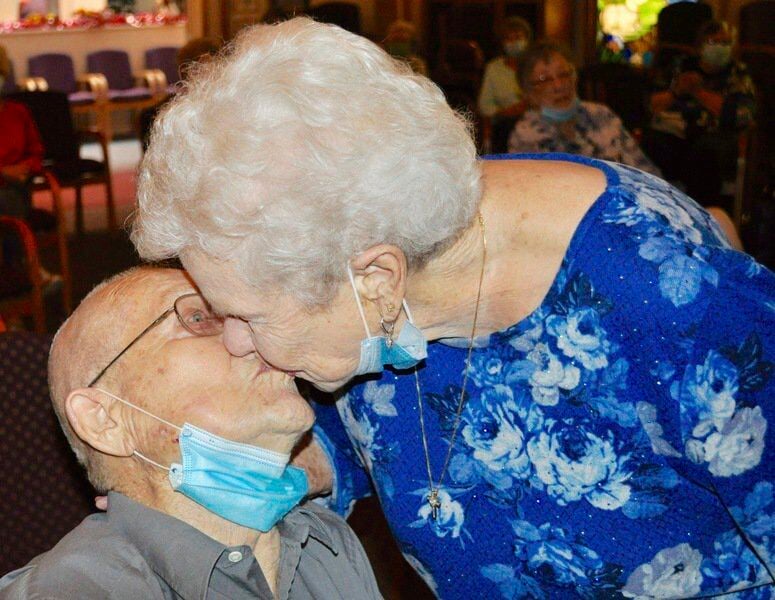 Millie Fussell leans in to kiss her husband of more than 78 years, Virgil Fussell, during a ceremony at Golden Oaks Village recognizing them as Oklahoma's longest-married couple, Monday, Oct. 12, 2020.

Millie Fussell holds a locket bearing an image of she and her husband Virgil Fussell. The Fussells were recognized Monday, Oct. 12, 2020, as Oklahoma's longest-married couple after more-than 78 years of marriage.

Millie Fussell leans in to kiss her husband of more than 78 years, Virgil Fussell, during a ceremony at Golden Oaks Village recognizing them as Oklahoma's longest-married couple, Monday, Oct. 12, 2020.

ENID, Okla. — A couple living at Golden Oaks Village was recognized Monday as the longest-married couple in Oklahoma, in honor of their more-than 78 years of matrimony.

Worldwide Marriage Encounter, billed as "the largest faith-based marriage enrichment organization in the world," honored Virgil and Millie Fussell during the virtual ceremony Monday morning, attended in-person by a number of staff and friends in the chapel at Golden Oaks.

Worldwide Marriage Encounter recognized the Fussells as part of its effort to identify the longest-married couple in each state, and the nation as a whole. The national honor this year went to a couple in California who have been married 85 years.

Virgil Fussell said he and Millie were surprised by the honor. Their marriage has been "longer than the average," he said with a laugh.

To this day, Virgil said he has no idea when he first met Millie.

The encounter came on the streets of Mooreland, and he and Millie didn't have much control over the meeting.

"In Mooreland, in those days, they had benches on the west side of the street," Virgil said, "and the women would get together and gossip, and we met there, as babies."

The couple were married in 1942, and not long after the war effort came calling for them both.

Virgil would serve one year stateside, then two years in the Pacific Theater with the 5th Air Corps, of the Army Air Corps. While he served overseas, Millie worked as a "Rosie the Riveter," assembling B-29 bombers in Wichita, Kan.

After his military service, the couple found job opportunities in Mooreland scarce, and moved to Yakima, Wash., where Virgil landed a job with Pacific Power and Light.

He worked there 36 years, and along the way the couple adopted two children — a son, who died at a young age; and their daughter, who lives in Spokane, Wash. After Virgil retired, about 37 years ago, he and Millie returned to their hometown of Mooreland and built a house.

"We've had a very nice life," Virgil said. He now is 99, and Millie is 95. They live independently at Golden Oaks.

Elaine Johns, marketing director at Golden Oaks, said the community there likes to celebrate longevity in the marriages of its residents.

"In August, we celebrated more than 400 years of marriage with seven couples at Golden Oaks," she said. "Having been married for more than 45 years myself, I understand the commitment, love, faithfulness, patience, forgiveness and selflessness it takes to maintain a successful marriage."

Johns nominated the Fussells for the Worldwide Marriage Encounter search for the longest-married couples in each state, "never expecting to receive the call this past Friday of the award."

"I look at the Fussells' marriage as an amazing couple who have survived the Great Depression, World War II, separation, poverty and business success," Johns said.

Johns said she has a special metaphor to explain how the Fussells have stayed together — and in love — for so long.

"With all the grace it takes to be married that long, there is one metaphor that comes to mind," she said. "Scissors — two separate blades connected to a handle — but unless you join them together with a pin, they can’t function. The pin that holds the Fussells together is Christ. Nothing will separate them from him until death does them part.

"Marriages like that deserve to be honored and remembered, and we’re glad we were a part of their celebration," Johns said. "It was a joy to celebrate that award with them and a large group of their Golden Oaks friends during another period of unprecedented challenges."

Johns said she hopes to see the Fussells match this year's nationally honored couple, and reach their 85th wedding anniversary.

Upon reaching that milestone, the former private pilot said he'd like to fly a motor glider. Millie isn't so sure of the idea.

"She said if I do that, all those people who think I'm stupid will be proven right," Virgil said with another laugh.

After being recognized as the longest-married couple in Oklahoma, Virgil said he and Millie have some simple advice for young married couples: "If you're wrong, admit it. If you're right, shut up."

ENID [mdash] The services celebrating and honoring the life of James Berry, 77, of Enid, are pending under the direction of Brown-Cummings Funeral Home. Condolences may be made to the family online at WWW.Brown-Cummings.com