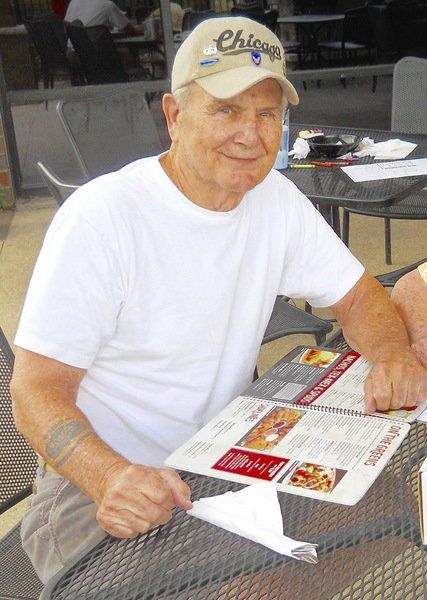 Richard Voss, an Army veteran who came to America as a refugee after World War II, recently repaid the gift of a new bicycle he received in 1947 by buying bikes for two kids through Salvation Army of Enid. (Photo provided) 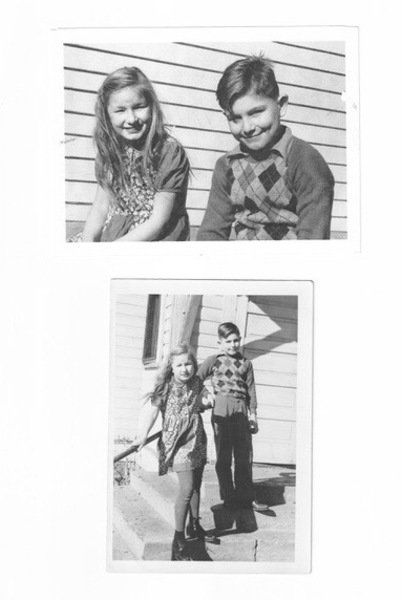 Richard and Cecilia Voss are seen in a pair of family photographs, taken not long after they came to Bison as refugees from Germany in 1947. (Photo provided) 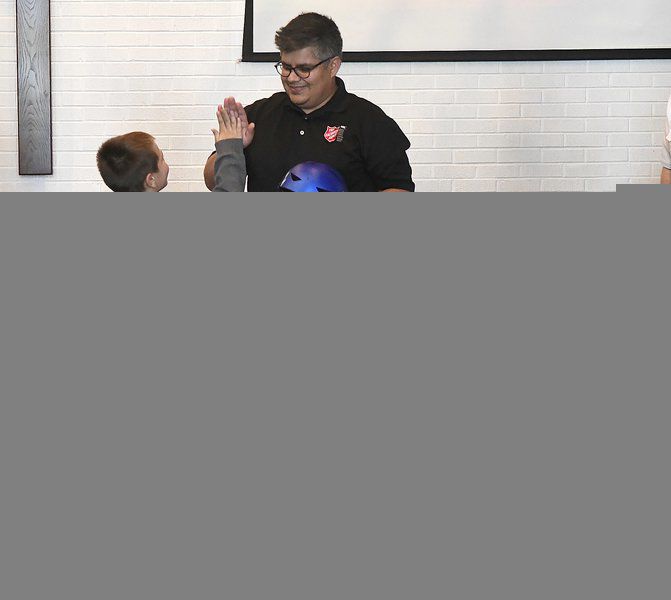 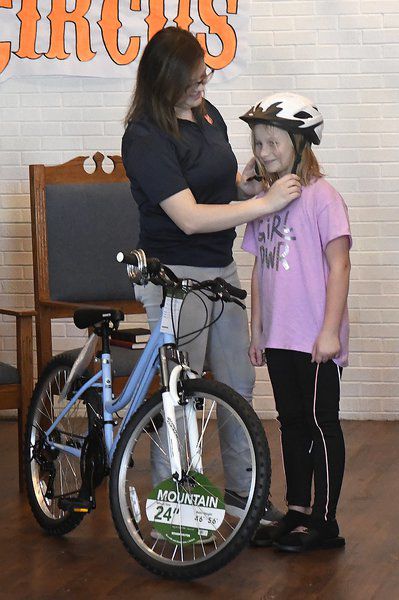 Richard Voss, an Army veteran who came to America as a refugee after World War II, recently repaid the gift of a new bicycle he received in 1947 by buying bikes for two kids through Salvation Army of Enid. (Photo provided)

Richard and Cecilia Voss are seen in a pair of family photographs, taken not long after they came to Bison as refugees from Germany in 1947. (Photo provided)

A veteran who came to America as a refugee donated two bicycles Friday to local children, through the Salvation of Enid. The donation brought full circle a gift Richard Voss received as a boy, shortly after coming to Bison with his sister, Cecilia, in the wake of World War II.

Voss said he and Cecilia were born in Chicago, but in 1938 their mother and stepfather — who was from Germany — moved them to live near Rosenheim, Germany. Soon after, the Second World War broke out, and for the next six years, Voss said, “The world was at war and I was taught that America was one of my enemies.”

After his mother was killed in an Allied bombing raid in 1943, Voss and Cecilia, then 11 and 9 years old, were left in the care of their stepfather and his family.

But there was little food or work available in Germany during or after the war, and by 1946, their stepfather decided it was best to send the children back to America.

Without explanation, Voss said their stepfather took them to the American embassy, and handed them off to a Marine guard — someone Voss still considered an enemy.

He and Cecilia were shipped to a refugee camp in Bremerhaven, Germany. It was there Voss said he first heard of the concentration camps.

“We were deloused and then we watched a film about a concentration camp, showing the brutality and evil committed by the Nazis,” he said. “Some people watching the film became sick. I wondered if this was American propaganda. It was the first time I had to face the possibility that all that I was taught was not true.”

After several months of waiting in the refugee camp, Voss and his sister were selected to be shipped to America aboard the SS Ernie Pyle, a former Liberty ship that had been used to transport American troops to the war.

It took almost two weeks to make the transit to New York City, where the two children arrived in January 1947. They were then put on a train bound for Oklahoma City.

Voss said they never were told where they were going or who would meet them.

“I told my sister, ‘I don’t know where we are going or who we will be living with,’” Voss said. “I said I didn’t care as long we didn’t have to live with nuns.”

Voss had no way of knowing it was the Catholic Church that had arranged travel and living arrangements for him and Cecilia.

“As the train slowly pulled into the station, I stuck my head out of the door and looked out and there stood three nuns,” Voss said with a a laugh. “I told my sister what I saw and we both said, ‘Oh no.’”

The children had arrived in Oklahoma City. Voss said they were quickly relieved to find the nuns were friendly, and they were driven to live with them at the parish of St. Michael in Bison.

Voss said his new home was comfortable, and he was glad to be settled. But he and Cecilia still didn’t feel at home.

That changed several days later when the nuns and a priest he remembers only as Father Kerns drove them to St. Joseph Catholic School in Enid.

Voss and Cecilia were led into the school and onto a stage, where they stood between the front and rear curtains.

“All was quiet. Suddenly the front curtains started to open, I was a little startled and moved backwards against rear curtains and bumped into a hard object that felt like handlebars,” Voss said. “A flashing thought went through my mind: ‘Is this a bicycle and could this be for me?’ What a crazy thought. I erased it immediately.”

Looking into the audience, he and Cecilia were surprised to see a crowd of smiling children and nuns.

“I was surprised and did not know what to do,” Voss said. “Suddenly, the rear curtains started to open, and the children all stood up and started clapping.”

When the rear curtain went up, Voss said he and Cecilia were surprised to see a new red bicycle and a baby doll in a buggy.

“Father Kerns explained to us in German that all the children had donated their lunch money for several days to buy these presents,” Voss said. “I could not believe what was happening. I just kept saying, ‘danke, danke’ — ‘thank you, thank you.’ Something as wonderful as this can only happen in a dream.”

Voss said receiving that bike, and riding it that day, was the beginning of him feeling at home in America.

“I felt great joy and freedom,” he said. “It was all so wonderful.

“I will never forget what the children and nuns did for me that day,” Voss said. “I saw a kindness that I did not know existed. I will forever be grateful to them.”

Voss and his sister only lived in Enid a few months before the Catholic Church found them a permanent home in Bensenville, Ill. Voss’ bicycle was shipped to him several weeks later.

Over the years, Voss’ love for America grew. He worked a newspaper route and odd jobs, made possible by his bike. And, when he was 17, he determined to give back to America by enlisting in the Army to fight in Korea.

After basic training at Fort Knox, Ky., he shipped out to Korea and served as an infantry soldier. In all, he served six years in the army he once considered his enemy.

“Now, in my maturing years, I realize that there are many other ways that I could have served my country,” Voss said, “but I was only 17 then, and serving in the Army was the only way that I knew.”

Cecilia died on April 6, 2018. Voss said she and he never forgot what the children of Enid did for them all those years ago, when they first came to America.

“It was such a wonderful thing that the people of Enid did for me,” Voss said.

It’s been a long-held dream, he said, to pay that gift back, by giving bicycles to a couple of kids in the community he once called home.

That dream came to fruition last week when Voss connected with Maj. John Edmonds, of the Salvation Army of Enid, and donated the funds to purchase two bikes and helmets.

Titus said he was surprised to receive the new bike, and he was looking forward to taking his first ride on it. His mother, Candas Miller, said she was “proud that he behaves in the correct fashion, and is a good example to the other kids.”

“We’re very thankful for this opportunity and this wonderful gift for the kids,” she said.

To Voss, Decker said he’d just like to say “Thank you,” and “this is a very kind gesture.”

Edmonds said the Salvation Army was pleased to be a part of making it all happen.

“We want to thank him for the love he has for you all,” Edmonds told the day camp children. “And we are thankful for the love he received coming here to Enid, and for the love of the nuns who took such good care of him.”

Voss said he was glad to finally be able to bring the gift he received in 1947 full-circle, and bring some joy to other kids in need.

“I am filled with gratitude and joy,” Voss said. “I hope the new owners of the bicycles will remember the day that you all have given them and maybe someday they too will want to close what is now the beginning of a new circle.”