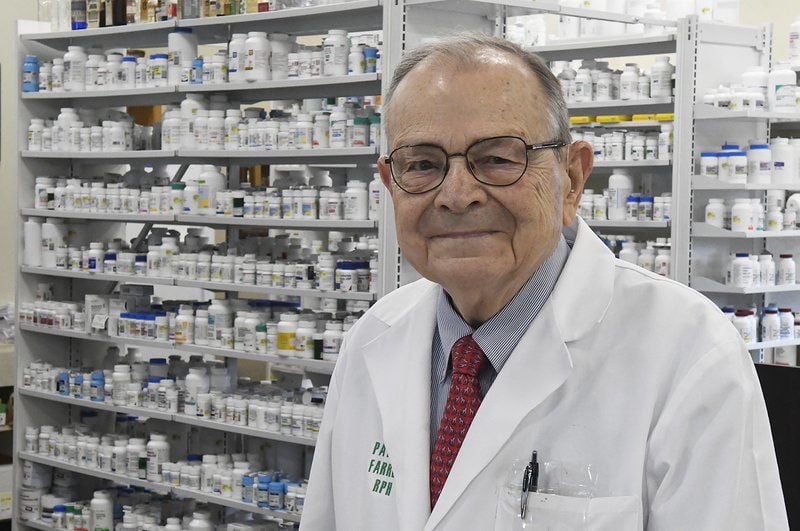 Pat Farrell, a pharmacist at Rick's Pharmacy, will be recognized Tuesday with a Governor's commendation for 60 years of service as a pharmacist. (Billy Hefton / Enid News & Eagle) 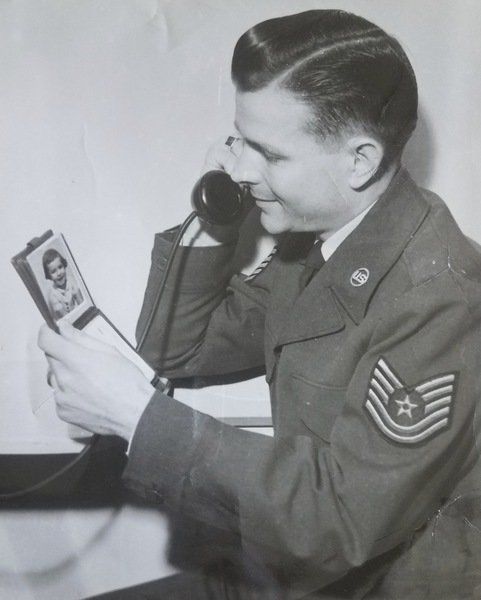 Pat Farrell, then a technical sergeant in the Air Force, is seen circa 1954, looking at a photo of his daughter, Susan, while calling home from an air base in Newfoundland, Canada. It was the Air Force that first brought Farrell to Enid. He's remained here as a pharmacist for more than 60 years, and will be honored with a Governor's Commendation for his career on Tuesday. (Photo provided)

Pat Farrell, a pharmacist at Rick's Pharmacy, will be recognized Tuesday with a Governor's commendation for 60 years of service as a pharmacist. (Billy Hefton / Enid News & Eagle)

Pat Farrell, then a technical sergeant in the Air Force, is seen circa 1954, looking at a photo of his daughter, Susan, while calling home from an air base in Newfoundland, Canada. It was the Air Force that first brought Farrell to Enid. He's remained here as a pharmacist for more than 60 years, and will be honored with a Governor's Commendation for his career on Tuesday. (Photo provided)

ENID, Okla. — In a profession that can change from one year to the next, one man has been at it longer than most — possibly longer than anyone else in Oklahoma.

Pat Farrell, 90, currently a part-time pharmacist at Rick's Pharmacy, will be recognized Tuesday with a Governor's Commendation for 60 years of service to the pharmacy profession.

Farrell is scheduled to receive his commendation in a reception at 1 p.m. at the Oklahoma State Board of Pharmacy in Oklahoma City.

Marty Hendrick, executive director of the Oklahoma State Board of Pharmacy, said the board recommended Farrell for the recognition for his longevity and his dedication to both the pharmacy profession and to the people he continues to serve.

"To have this kind of career, with all the changes in pharmacy we've had since he started, is a real testament to the man's work ethic," Hendrick said. "We have so many people younger than him who decide the technology has moved past them, and they'll retire, but Mr. Farrell has stuck with it, and he is as sharp as can be."

Hendrick said all the board inspectors who've come to Enid over the years have known Farrell as "a very professional and friendly man."

"We're very proud of him," Hendrick said. "We have nothing but great things to say of him."

Originally from Sleepy Eye, Minn., Farrell's career in pharmacy started in St. Paul, Minn., in 1950, when he graduated from North Dakota State University and went to work in St. Paul's The Apothecary Shop. He said Sleepy Eye would be familiar to the fans of the fictional community of Lake Wobegon, which Garrison Keillor made famous on the radio program "A Prairie Home Companion."

Farrell first came to Enid in 1952 at the age of 23 after he enlisted in the Air Force and was assigned to the pharmacy at Vance Air Force Base.

At first, Farrell said he wasn't sure what to think of Enid. Having been raised in a Bohemian and German culture in Minnesota, where most "enjoyed their beer," he said he was surprised to find an entire state that was, at the time, "dry."

"I didn't even know there was such a things as a dry state in the United States," Farrell said with a laugh.

After several weeks of living on base, Farrell moved his family into an apartment on East Broadway, and before long, he started looking for ways to supplement his Air Force salary.

He started working nights at Sanford-Stunkle Drug Store, then at Broadway and Independence, and later moved to work three nights a week and Sunday afternoons at Scheffe Pharmacy, then a half block west of the current location of Scheffe Prescription Shop at 127 E. Randolph.

Farrell departed Enid in 1954 — only temporarily, as it turned out — when the Air Force assigned him to oversee the pharmacy at the former Ernest Harmon Air Force Base in Newfoundland, Canada.

While there, he was named the Outstanding Airman for the Northeast Air Command, a former command that oversaw air defenses for Newfoundland, Labrador and Greenland during the Cold War.

He left the Air Force in 1955 and returned to his first pharmacy job at The Apothecary Shop in St. Paul. There were no plans to return to Enid, Farrell said, but that changed one day when Walter Scheffe called and asked him to take his old job back full-time.

"Out of the blue, Scheffe called me and wondered if I'd be interested in coming back down here," Farrell said, "and I thought, 'Yeah, OK.'"

He returned to Scheffe's and Enid in 1956, and remained there for more than 50 years — a staple presence for several generations of pharmacy customers.

After more than a half century at Scheffe's, Farrell tried leaving the profession.

By 2010, Farrell was back at it, working part-time at Rick's, where he can still be found most mornings.

At 90, most people wouldn't think of going to work every day. But, Farrell said, he wouldn't have it any other way.

The job of a pharmacist has undergone a lot of changes in 60 years, Farrell said, especially in the use of computers, insurance requirements and government regulation of controlled substances.

But one thing hasn't changed.

"It's the opportunity to serve and provide pharmaceutical services for people," Farrell said. "I still enjoy serving people as a pharmacist. It's satisfying."