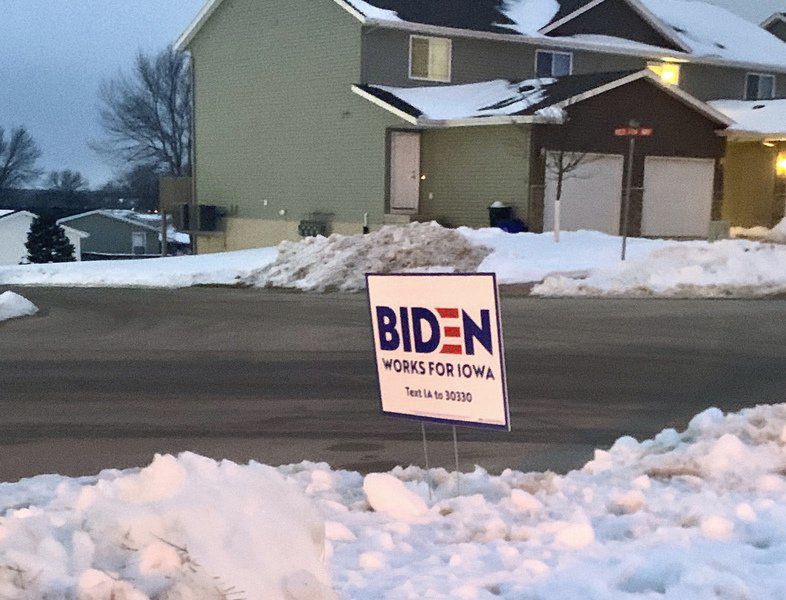 A Joe Biden campaign sign sits the snow outside of an event in Marion, Iowa. 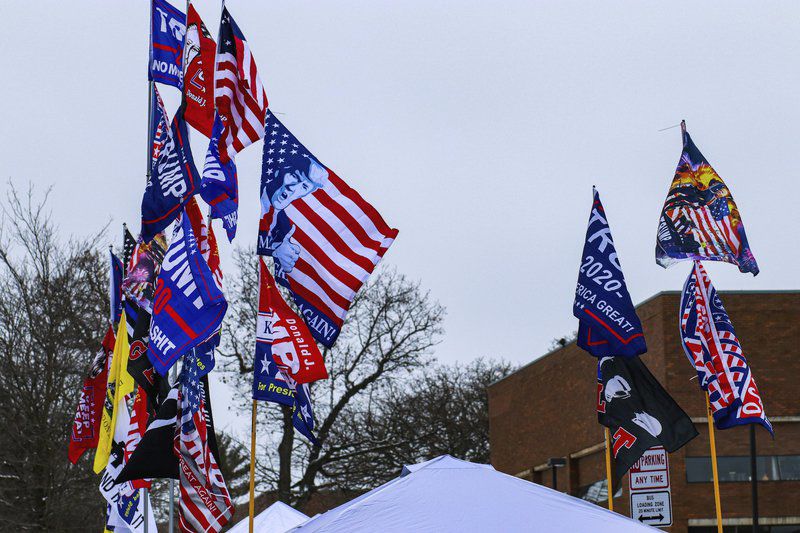 Flags in support of President Donald Trump flap in the breeze in Des Moines, Iowa.

A Joe Biden campaign sign sits the snow outside of an event in Marion, Iowa.

Flags in support of President Donald Trump flap in the breeze in Des Moines, Iowa.

DES MOINES, Iowa — Iowa voters will caucus Monday night in the first step toward the 2020 presidential election — but Oklahoma residents will have to wait until they can make their decisions.

Although all eyes are on the Hawkeye state now, voters who will caucus next week are somewhat similar to Oklahoma’s electorate — with the state made up of a majority of white voters dispersed across a rural, midwestern area.

Dianne Bystrom, former director of Carrie Chapman Catt Center for Women and Politics at Iowa State University, who also worked at the University of Oklahoma for 17 years in public relations and political communication, said early states usually narrow the field of candidates for Super Tuesday on March 3. More than one-third of the U.S. population — including Oklahomans — will cast their vote that day, according to American Politics Encyclopedia Ballotpedia.

“What I see and that’s supported by some research is that the result in the early states tends to influence what happens in other states on Super Tuesday,” Bystrom said. “Oklahomans (may) have less choices than Iowa, but they’ll still have a pretty robust choice because … the differences in outcomes in those first four states will dictate how many people are still standing on Super Tuesday.”

Tyler Johnson, an OU political science associate professor with expertise in public opinion and elections, said that it’s difficult to “draw a direct line” between Iowa and Oklahoma.

This lack of diversity in Iowa often prompts questions as to why Iowa has the privilege of going first in the electoral process, which it has since 1972 simply for the sake of being the first state.

If the results from the early-voting states of Iowa, New Hampshire, South Carolina and Nevada fall the same way, it may cause Oklahomans to decide to stand behind that front runner, he said.

“If you get sort of a mixed bag out of those first few contests, then it’s likely that Oklahomans are going to come into that primary on Super Tuesday sort of voting their conscience or their real preference,” Johnson said. “We’ll have to see if the first few contests after Iowa fall in line … or perhaps we get to Super Tuesday, and Oklahomans are just as confused about what’s going to happen.”

Voters choosing their “real preference” may be fewer in numbers in this year’s Iowa caucus due to a rule change, Bystrom said. Typically, caucus-goers would enter the designated area and stand under a sign for their chosen candidate, and others could come by that sign and lobby voters to change groups — called the “first alignment.”

This year, voters will be locked in with their first choice if that candidate obtains viability, or 15% of the vote. The state also will report the results of the first and final alignments for the first time — rather than just the numbers of state delegates each candidate is allocated.

As a result of this rule change, Bystrom said she is seeing more of a fight for Iowans between who they ideologically prefer and who they think may be most electable against President Donald Trump.

“In the time I was in Iowa, I have really never seen more emphasis on really wanting to get rid of the Republican incumbent,” Bystrom said. “I do think what’s going to happen this year … the (Iowans) I talk to … what they really really want to do is they want to beat President Trump. It’s just the struggle between who they like in their hearts and who is in their head with who can beat Trump.”

Many Iowa voters at Democratic events throughout the state said the issue of beating Trump will be their main priority when they head to the polls Monday night.

“I think that sentiment is heightened right now,” Johnson said. “Given the animosity between parties, given the dislike of Donald Trump that is clear within the Democratic Party right now, the sort of passionate dislike, I don’t think it’s too much of a stretch to say that that’s at the forefront of people’s minds and to a level that perhaps it hasn’t been in past cycles.”

Although Iowa is more of a purple state compared to Oklahoma, which has not favored a Democrat for president since 1964, Democrat Oklahomans chose the more progressive candidate — Bernie Sanders — by 10 points in 2016’s Democratic primary, where Iowa chose Hillary Clinton by less than one point.

Johnson said though San­ders did galvanize Oklahoma support in 2016, the fact that this year’s Oklahoma primary most likely will not be the clear one-on-one race it was four years ago may change things.

“It’s been argued that Oklahoma still has this sort of anti-establishment populist streak among some voters that might have made Sanders a more appealing choice,” Johnson said. “You have the interesting dynamic of Elizabeth Warren being from Oklahoma as well … if she is still a strong contender at the time of that primary, that might win her some attention that would have gone to Sanders before.”

Although this may seem discouraging, Bystrom said, the state still plays a crucial role in choosing the frontrunners for the nomination — with candidates rarely going on to win their party without finishing in the top three in Iowa.

Whatever the results may be Monday night, Johnson said there’s still plenty of time for the dynamics to shift in the month between Iowa’s caucuses and Super Tuesday — but these results still are important because they are the first concrete measurements voters have of candidate performance.

“We’ll have some data and some data that matters,” Johnson said. “I think everyone should be paying attention to Iowa, because we’re actually going to have tangible information on how voters have reacted to the past year or so of campaigning.”