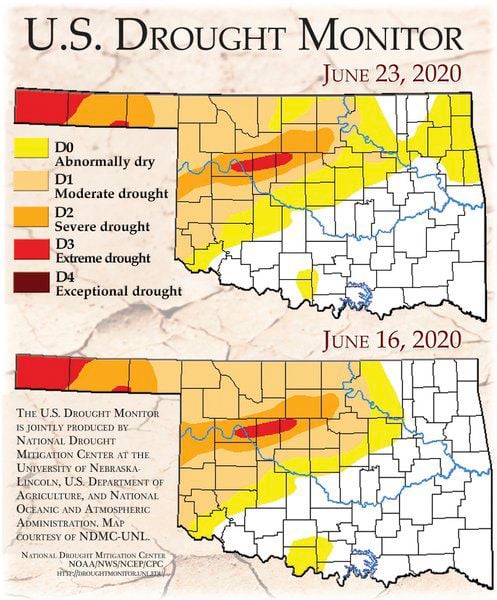 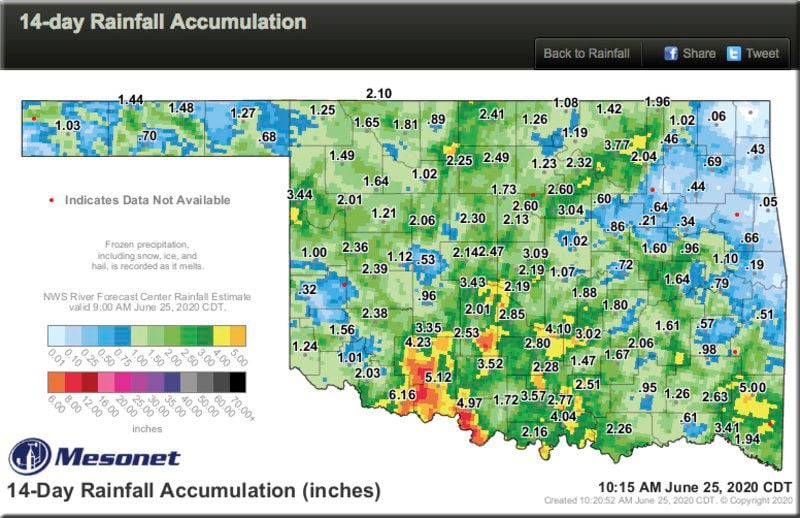 ENID, Okla. — Northwest Oklahoma remains locked in drought conditions despite nearly 2.5 inches of rain the last two weeks, according to Drought Monitor, which measures dry land conditions across the nation.

The map of drought in Oklahoma — determined by soil samples taken Tuesday, with results announced Thursday — looks similar to last week’s, even after more than an inch of rain fell in some parts of the state since the last measurements.

The rain came so fast that most of it ran off, said Mike Honigsberg, Enid and Garfield County Emergency Management director.

“All it did was cause us problems if we have to put out the fires because of the mud (it created),” he said.

Honigsberg said the area needs a good, soaking rain in order to bring real relief from the drought.

Much of Garfield County is seeing severe drought conditions, while some parts of Kingfisher and Blaine counties are in extreme drought. Much of remainder of Northwest Oklahoma is in moderate drought, with a large portion of Grant County seeing abnormally dry conditions.

Weather forecasts by National Weather Service call for continued dry and hot conditions, with highs in the mid-90s in the coming days. Heat values will be near 100 on Friday, according to NWS.

There is a 30% chance of showers and storms Friday night into Saturday and a 20% chance of rain on Saturday night, according to NWS.

Honigsberg said the area has had a “boatload of fires,” and as long as the weather remains dry and windy, the conditions will continue to remain ripe for that to continue.

“People just need to be careful,” he said. “When your humidity is low it will start a fire.”

He said anyone who is smoking or working with equipment that can create sparks should be extra careful and make sure they are putting out their cigarette or cigars and clearing work spaces of anything that could catch fire.

“With Fourth of July coming up, that’s a whole different story,” Honigsberg said.

He said he will spend time next week posting information on social media about city and county laws regarding fireworks. He also will be speaking to people at fireworks stands to make sure they know that information, as well, in case they field questions from the public.

It is unlawful to ignite fireworks within 500 feet of an agricultural crop that has not been harvested, according to state statutes, and firing them off of a county road also is illegal, Honisberg said.