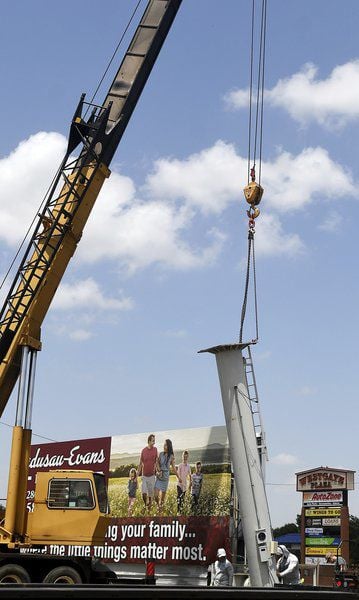 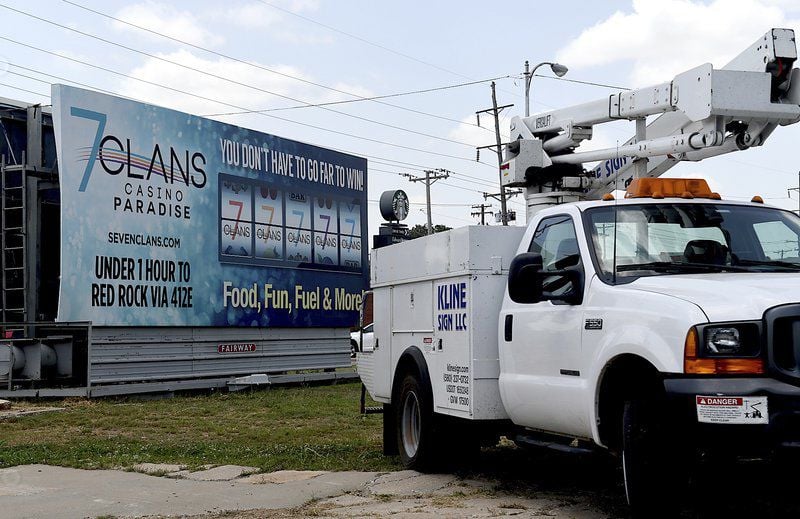 The billboard at Lahoma Courts came down June 27 as Kline Sign workers removed the 17-ton structure and its base. (Bonnie Vculek / Enid News & Eagle) 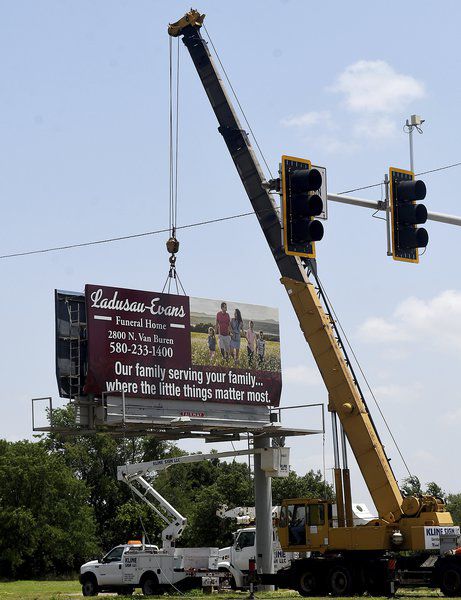 The billboard at Lahoma Courts came down June 27 as Kline Sign workers removed the 17-ton structure and its base. (Bonnie Vculek / Enid News & Eagle)

Years of talks, meetings and negotiations have gone into securing the 48 properties off Cleveland and Garriott for retail development, but with most of the red tape finally cleared, the more tangible work of demolition and construction can soon begin.

Gilbert "expects signs of progress to become evident by the week of July 8," a city news release said.

"Several permitting steps need to be completed before demolition of the area; however, I am pleased to report progress as redevelopment of this area gets underway," Gilbert said.

In the next week, a construction fence will be put up around the site, and existing underground utilities will start to be removed, according to Don Rose, director of construction for Hammer Williams Co.

By the week of July 15, demolition work is scheduled to begin, Rose said.

"Demolition should take around 45 days once started," he said.

Anchored Capital 3 LLC, the developer in charge of the project, purchased all of the property from the city on June 25.

Anchored Capital is an affiliate of Hammer Williams Co., which owns the Jiffy Trip gas station franchise. Jiffy Trip is one of two businesses promised to open in the development, the other is a Colton's Steak House. Other businesses are planned as well.

A billboard was recently removed, as it would have been in the way of the planned Jiffy Trip station, Anchored Capital member Alex Williams said. The developer plans to install a new, electronic billboard to replace it.

The city is in the process of finalizing an agreement with Apex Cinema, to fill a 7.4 acre tract with a new movie theater, Gilbert has said. No deal has been reached yet, but if one is, it will go before the city commission for approval.

In March, Mark Dean, currently owner of three Colton's Steak Houses, told the News & Eagle construction would be finished in five months, once ground is broken.

"I’m really excited, really excited. Two or three times, I’ve spent two or three days in Enid and it’s a great city, I can tell. ... It seems like a very busy town and we’re excited to be there. I think it’ll do great," Dean said. "We want to bring good food and good steaks to the town of Enid and ... I know there’s a need there for it, so that’s why we’re excited to get there. That’s why we’re coming there, we know they got good people and have a need."

Kyle Williams, president of Hammer-Williams Co., also told the News & Eagle in March that the Jiffy Trip will be between 5,000 and 6,00 square feet and will be similar to the one being built at Garland and Garriott.

"We really are trying to make certain it looks very, very nice and we improve the area, improve the look," he said of the Lahoma Courts development. "It is a major intersection for our community, and so that just takes a little bit of time. We’ve got a lot of great people helping with that, and we hope it will be a destination point for many people — not only for our community, but people coming in from out of town. It’ll be a destination corner for them."