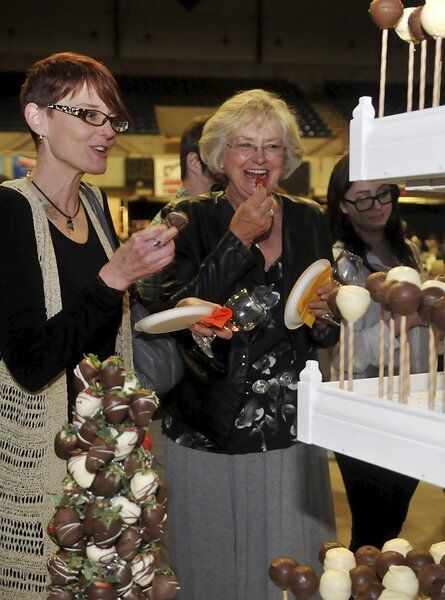 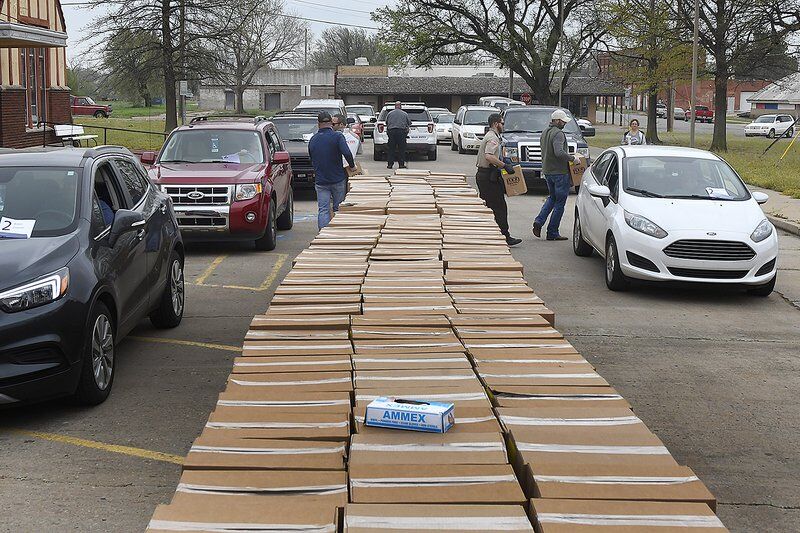 Volunteers load cars with boxes of food at the RSVP Senior Center Monday, April 6, 2020. Demand for such services has been up this year, even as nonprofits like RSVP have seen significant declines in fundraising due to COVID-19 prevention measures. (Billy Hefton / Enid News & Eagle)

A packed crowd enjoys the 26th annual United Way Chili Cook-off in 2013. Many such large fundraisers have been canceled this year, thought United Way still hopes to pull off the Chili Cook-Off on Oct. 31.(Staff Photo by BONNIE VCULEK) 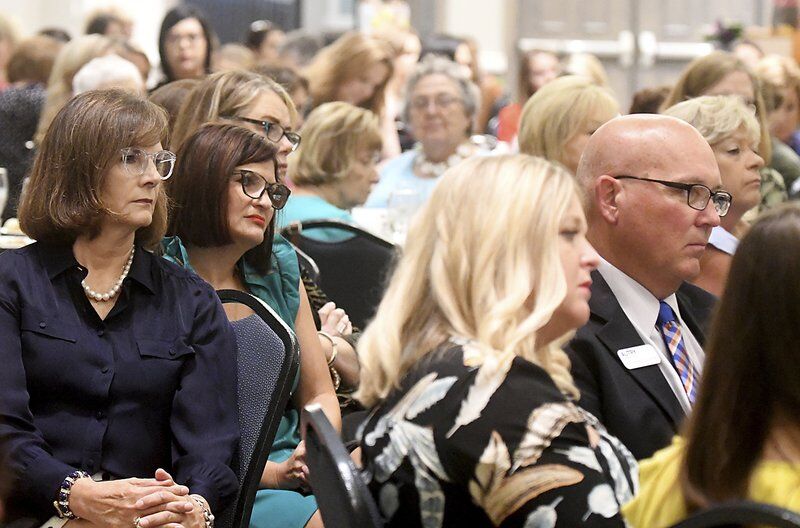 Guests during the YWCA Purses with Purpose listen during the keynote address by award-winning author, Janine Latus, at the Central National Bank Center Thursday, July 12, 2018. This year's event was moved to an all-online format on Aug. 4-8. (Bonnie Vculek / Etown)

Volunteers load cars with boxes of food at the RSVP Senior Center Monday, April 6, 2020. Demand for such services has been up this year, even as nonprofits like RSVP have seen significant declines in fundraising due to COVID-19 prevention measures. (Billy Hefton / Enid News & Eagle)

A packed crowd enjoys the 26th annual United Way Chili Cook-off in 2013. Many such large fundraisers have been canceled this year, thought United Way still hopes to pull off the Chili Cook-Off on Oct. 31.(Staff Photo by BONNIE VCULEK)

Guests during the YWCA Purses with Purpose listen during the keynote address by award-winning author, Janine Latus, at the Central National Bank Center Thursday, July 12, 2018. This year's event was moved to an all-online format on Aug. 4-8. (Bonnie Vculek / Etown)

As the COVID-19 crisis continues, local nonprofits have had to cancel or shift to all-virtual formats for their largest annual fundraisers, putting a serious pinch on their balance sheets, even as demand for their services continues to rise.

A June 22 article in Chronicle of Philanthropy reported a 6% decline in philanthropic giving in the first quarter of 2019, but noted losses due to the pandemic were higher than that figure indicates since January and February, before the pandemic's impact, were relatively good months for fundraising.

March alone saw an 11% decrease — a trend that, if it continues through the remainder of the year, would mean a $25 billion cut in funding for nonprofits that have been at the forefront of helping those most affected by the coronavirus pandemic and the slumping economy.

Dan Schiedel, CEO and executive director of United Way of Enid & Northwest Oklahoma, said local nonprofits are struggling to fill holes in their budgets left by fundraisers that were delayed, and have now been canceled.

"A lot of them have been canceling or postponing their events, and some of those fundraisers bring in $15,000 to $30,000 — that's a significant impact on their budget," Schiedel said. "That directly impacts the number of people they can help, because they don't have the funds."

While hopes were high for a return to normal after the shutdown, which effectively ended in June, the continuing upswing in COVID-19 cases has some nonprofits fearing large, in-person fundraisers may have to be scrubbed well into 2021, Schiedel said.

He said if United Way had to forego all its fundraisers, that would mean a 15% cut to its annual budget, "and that means essentially eliminating administrative costs — we just wouldn't be able to function very well." For other nonprofits, Schiedel said the budgetary impact of having to eliminate fundraisers would be as high as 45%.

Some nonprofits have been able to weather the crisis so far, thanks to "rainy day" funds built into their budgets.

YWCA Enid Executive Director Carrie Sanders said her organization is "set up pretty well, because we planned for a crisis like this, and we have money in reserve."

But she said those funds can't last indefinitely, and are being depleted at a greater rate than usual as demand surges for services at the YWCA and other social service agencies.

"We have no idea how long this is going to last, and we don't know how long our fundraising is going to be impacted," Sanders said.

To bridge the gap, Sanders said nonprofits will have to rely on members of the community stepping up to donate, without the impetus of a large, in-person fundraiser.

YWCA Enid's largest fundraiser of the year, Purses with Purpose, was rescheduled, then moved to an all-online format, for Aug. 4-8.

"I think it's important for people who have the extra in their budget to give and help," Sanders said. "We're still here, and if anything there's been an increased need for our services, so we really are filling a gap that our community would otherwise not be able to provide."

One of those "gap-filling" services that's seen increased demand in the economic downturn is the diaper bank and early childhood services at Community Development Support Association (CDSA).

But, funds for the program are at risk, said CDSA Executive Director Cheri Ezzell, because the program's largest fundraiser of the year, the International Wine Tour, was recently canceled, after having been moved back to July from its normal time in March.

"We were already in the hole in our early childhood programs, and the wine tour always funds that program," Ezzell said. "It is a struggle. We are spending out of a savings account to keep it afloat right now."

Ezzell said she's thankful to the many people who'd bought tickets for the wine tour who didn't ask for their money back, but to keep things going, she said more direct donations are needed.

"Without that, we have to make cuts," Ezzell said. "When that happens, and we have to cut back on people's hours, we can't provide the same level of service we were providing to those in need."

For some nonprofits, it hasn't been a matter of missing out on just one or two big fundraisers.

RSVP of Enid already has canceled three fundraisers this year — the annual volunteer banquet, the Aging with Grace conference, and the rescheduled and recently canceled Lip Sync Battle — causing a shortfall of about $24,000 from last year's fundraising at this point.

RSVP of Enid Executive Director Christy Baker said that shortfall is having a particularly hard impact on RSVP's senior feeding programs, which have seen a significant increase in demand due to coronavirus concerns.

"Especially with COVID, we're seeing an increase in need, and more of those who are coming in are emergency situations," Baker said, "because they are food-insecure to begin with, and now they don't feel safe going to the grocery store. The need is there, and we're the agency that serves that specific demographic."

Baker said local nonprofits have been doing a good job of sharing resources during these lean times.

"Where we have lows and they have highs, we trade out so we can help our community residents," Baker said.

But, to keep things going without the financial support of large fundraising events, Baker said more members of the public will have to step up, with their wallets and their manpower.

"Obviously, donations are needed, and anytime anyone has a moment to spare, to volunteer, to deliver meals or to help with the commodity box pickup, we could use the help," Baker said. "We have a great community that comes through, but we all draw from the same pot to serve these people in need, and we're all struggling."

4RKids Executive Director Tricia Mitchell said the annual Red Dirt BBQ dance was canceled, wiping out about $4,000 in fundraising, followed by a loss of the annual revenue from the Mud Volleyball Tournament, which also was canceled.

While many nonprofits have moved to online formats for their fundraisers, Mitchell said the results in those online events have fallen short of the normal, in-person events.

An annual Bingo tournament, which typically brings in about $7,000, was replaced this year with a virtual fundraiser.

Nonprofits have been busy writing for new grants to help bridge the gap, but Mitchell said it's hard to replace the fundraisers, which typically cover administrative costs and overhead, like utilities.

"The money from fundraisers generally goes to operation, and that's just that much we don't have to operate," Mitchell said. "Grants will usually pay for projects and programs, but they don't pay for the general operating expenses you have of running a nonprofit, and it's hard to replace those funds."

"We depend on that event every year, and it brings in about $60,000," Mitchell said. "We're already behind, so we're hoping we make at least that much."

Schiedel, with United Way, also is holding out hope in-person fundraising will be possible this fall.

The annual United Way Golf Tournament is set for Sept. 11 — pushed back from June — and the Chili Cook-Off for Oct. 31.

United Way still has about half the teams, and several sponsors, left to gather before the golf tournament, and Schiedel said the planning committee is "wrestling with" how to balance COVID-19 precautions with the need to bring people to the chili cook-off.

Schiedel said it's uncertain how nonprofits will continue their services if fundraising can't continue, or if the public doesn't step up without the annual fundraisers.

"I know everyone is looking at their resources, and where they're at," Schiedel said, "and it's kind of a scary time for a lot of people."