Officials also had no comment after the session on the city’s involvement with The One event set for this Christmas season downtown — which a legal nonprofit says is likely a constitutional violation.

On Thursday, Christopher Line, a staff attorney for the Freedom From Religion Foundation, sent the city commissioners and Mayor George Pankonin a three-page letter asking the city to cease any more infrastructure work related to and promotion of the religious Christmas event. 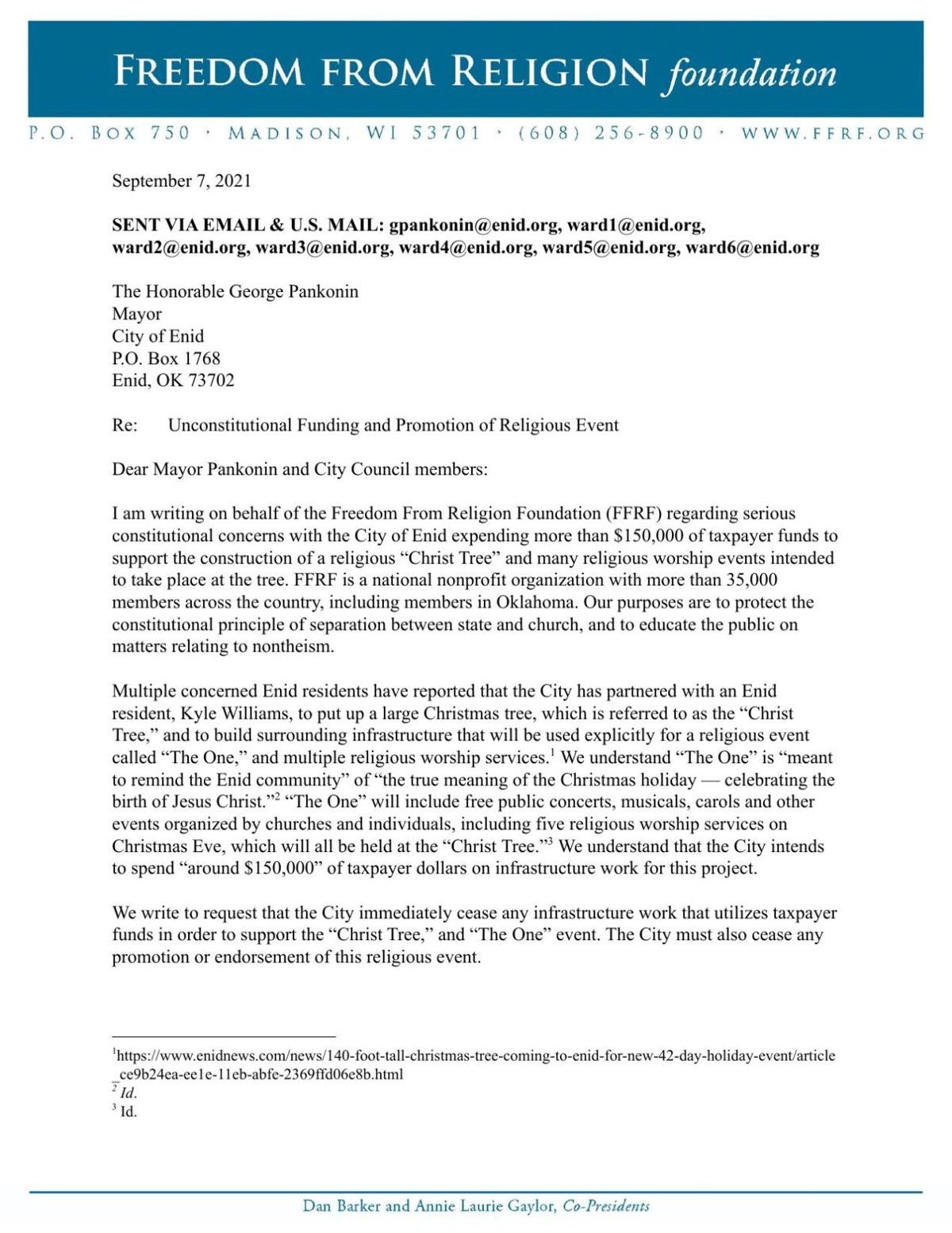 Line said the city’s using taxpayer funds to do repair work for the event — including repairing sidewalks, installing bollards and digging a receiver well for the 140-foot-tall Christ Tree — was a clear violation of the First Amendment’s establishment clause, which holds that public entities such as governments cannot endorse one religion over another.

The letter also was obtained by the News & Eagle on Thursday and requests written assurances that the city would cease the project.

The One is being organized, fundraised and promoted by a private team of area residents, families and sponsors, and is set to run for six weeks beginning Nov. 26.

Line said the foundation had received “multiple” reports from Enid area residents of late July’s announcement of The One event reported by the News & Eagle.

Line told the News & Eagle last Thursday the downtown situation wasn’t as “clean-cut” as some of the violations the FFRF deals with across the country.

Should the city of Enid participate in preparing for and promoting The One Enid Christ Tree project?

He said FFRF receives between 3,000 to 5,000 complaints a year. The foundation usually is able to resolve more serious reports of violations by sending a letter to the public entity such as a school board or government, which is then able to provide if their claims are incorrect.

“We view litigation as a last resort,” Line said, adding that the foundation hopes to get records from the city.

“We’re doing our best to unravel that here,” he said. “But it also seems pretty clear that there’s something inappropriate going on here and possibly illegal with the way the city is expending huge amounts of taxpayer funds for this, not to mention endorsing this (event).”

Media representatives for the team planning The One did not respond to a request for comment about the letter Tuesday.

As seen Tuesday, sidewalks and corner nodes have been repaired, and city-contracted workers are currently carving out a roughly 15-foot receiver well in the middle of Park, with six poles having been installed around the space.

The commission approved a second fiber-optic broadband company to begin installing another system in Enid.

Dobson Fiber will use the city’s rights of way to lay down a fiber-optic network for Enid homes and businesses.

Six of the seven commissioners voted for the deal. Ward 2 Commissioner Derwin Norwood voted against.

The deal may be nixed if Dobson does not use the right of way in a year.

PACE members said they didn’t want to build anything that would be in people’s way during the Christmastime events.

Enid City Attorney Carol Lahman said the resolution solidifies how the space would be used in the future with the appropriate infrastructure already in place, initially done in preparation for The One Christmas event set for the holidays.

The services celebrating and honoring the life of J. Patrick Ferrell, 92, of Enid, are pending under the direction of Brown-Cummings Funeral Home. Condolences may be shared with the family online at www.Brown-Cummings.com

Billie Myrle Laminack, 91, of Enid passed away September 22, 2021. A Memorial Service will be 11:00 a.m. Saturday, October 2, 2021, at Oakwood Cemetery, Statesville, NC. Cremation arrangements are under the direction of Ladusau-Evans Funeral Home.

The funeral for Tonya Tyau is Friday, September 24, 2021 at 2:00PM in the Henninger-Hinson Chapel. Visitation is Thursday evening from 7PM-5PM.

Peggy O. Westfahl, 88, of Enid, passed away September 21, 2021. Cremation arrangements are under the direction of Ladusau-Evans Funeral Home.