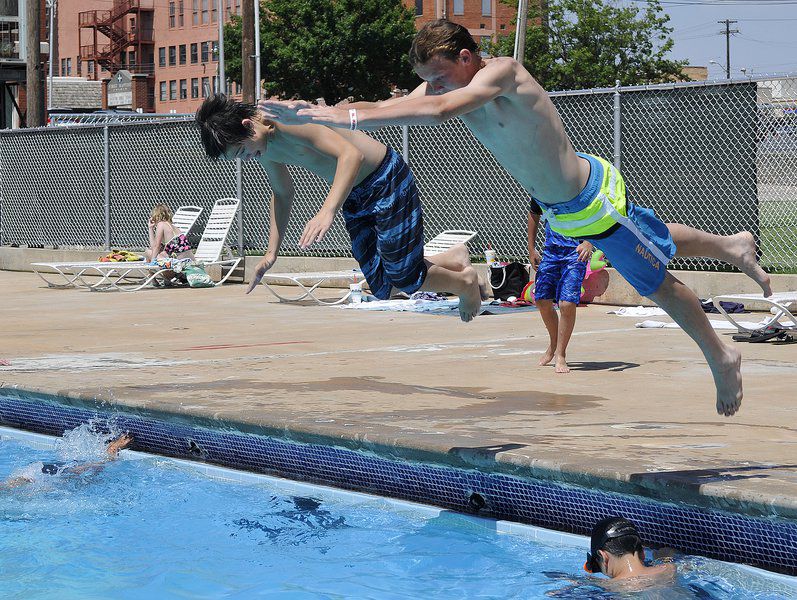 Jason Bryant and Dakota Skaggs dive into Champlin Pool together in June 2016. 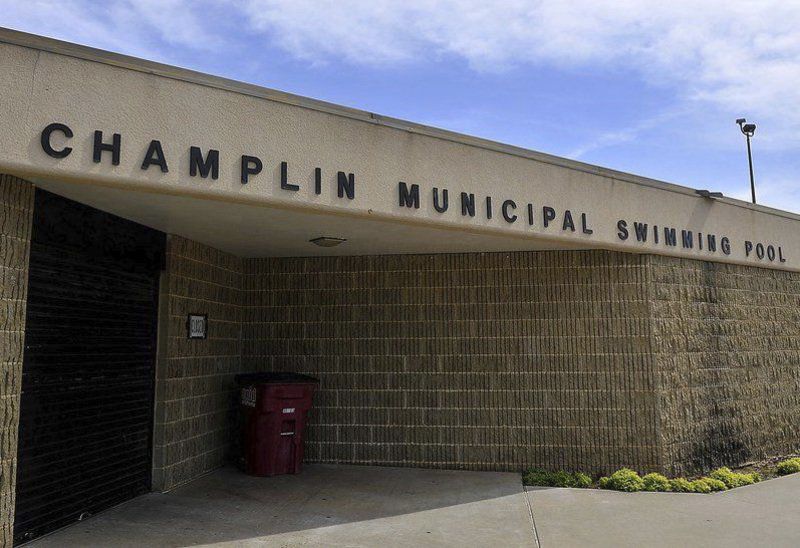 Jason Bryant and Dakota Skaggs dive into Champlin Pool together in June 2016.

ENID, Okla. — City commissioners Tuesday passed two amendments to Mayor George Pankonin’s declaration that extended the city’s state of emergency to June 30 — one allowing bowling leagues in Enid to resume before June 30 and another allowing City Manager Jerald Gilbert to open Champlin Pool and the city’s two splash pads if he can find the resources to operate them safely.

Gilbert, who already has authority to open the pool and splash pads, has previously said he intends to keep the pool closed but likely will reopen the splash pads sometime in June. He said during the commission meeting Tuesday that those might be staffed.

Ward 1 Commissioner Jerry Allen proposed both amendments after a lengthy discussion that saw several commissioners proposing the city pool reopen in some capacity.

“I think we need to go as far as we can to get that open,” said Ward 6 Commissioner David Mason, who agreed with Ward 2 Commissioner Derwin Norwood that limited pool hours could be doable. Norwood, along with Allen, said he had received numerous emailed complaints from residents over the pool staying closed.

Last week, Enid Park Board recommended the pool and splash pads not be opened this summer because of staffing and cleaning precautions related to COVID-19 health crisis.

Pool manager Kim Haley told the Park Board last week that every time someone leaves a deck chair, an attendant would have to clean the seat, following guidelines from Centers for Disease Control and Prevention. Face masks would be mandatory for anyone not in the water. Swimmers would have to exit the pool every 30 minutes, so staff would clean and reopen the pool area — meaning the pool would be open for five and a half hours, with visitors able to swim for three, Haley said.

“The rules are so ridiculously stringent that it makes it almost impossible for us to operate (the pool),” said Allen, who serves on the Park Board and proposed the amendment specifically so splash pads could reopen. While splash pads are not chlorinated, the water is not cycled, and less cleaning and staffing are necessary.

Ward 3 Commissioner Ben Ezzell, who voted against the motion along with Ward 4 Commissioner Jonathan Waddell, said reopening the pool did not sound fiscally practical or safe.

Gilbert previously said he would make his decision by the end of the month, but told commissioners Tuesday he would work with the Parks and Recreation Department on a push to hire more lifeguards and look at limited pool hours.

“I have no problem trying, but I’m making it very clear that it’d be very difficult,” Gilbert said.

The budget, presented over the past two weeks, calls for about $156.5 million in revenue, with the roughly $6.26 million deficit to be made up by fund balances that have built up over the years in several areas. For instance, general fund expenses for FY 2020-21 are budgeted at about $51.2 million, with about $48.7 million in revenue. However, the general fund has a current fund balance of about $13.1 million.

Enid Municipal Authority is budgeted at $55.9 million for next year, with about $53.7 million in revenue. It has a fund balance of $115 million. The capital improvement fund is budgeted at $15.3 million budget for FY 2020-21 — a slight increase from this fiscal year’s budgeted $14.7 million.

Commissioners awarded the contract of $419,670 for pre-construction services on the Kaw Lake water pipeline project to Garney Construction as the construction manager at-risk.

Working with design firm Garver Engineering through 60% of the design plans, in 90 days, the manager will provide the city an acceptable guaranteed maximum price (GMP) of construction. If the CMAR calculates $315 million or lower, the city will continue moving ahead with the 74-mile pipeline project, and the CMAR would be in charge of the build. Garver also intends to complete its design process within 90 days after the GMP approval.

Garney’s budgeted construction plan was set at $291 million of that total budget. Pre-construction is set to conclude in November.

The firm also has been contracted for shared savings 60%/40% (Enid/Garney) if the program were delivered for less than the GMP. That non-negotiable fee is not to exceed 5% the cost of work.

The city also accepted four parcel easements for the Kaw Lake program, totaling over $77,600. Of the 230 parcels needed to receive a $200 million loan from Oklahoma Water Resources Board, 170 have been accepted.

During the study session, commissioners heard updates on plans for the city’s future skate park, to be located at 5th and Randolph. The project, budgeted at $300,000, with $100,000 from Enid Police Department, will be designed by the firm Spohn Ranch using elements suggested by experts from the local skating community.

A design committee, including commissioners Allen and Ezzell, along with the Park Board, will meet with the firm Wednesday to begin the design process.

The city will meet to approve Spohn’s build agreement at its July 7 meeting, with construction set to be completed by Nov. 20.

EPD plans to build a training center on the current location of the Enid Skate Park, 400 W. State.

Commissioners also heard a revision to Meadowlake Golf Course’s rates and fees that would now include taxes and decrease rates for city employee; one to the city’s accessory building ordinance; and to the city’s solid waste ordinance defining polycarts at a multiplex residence.