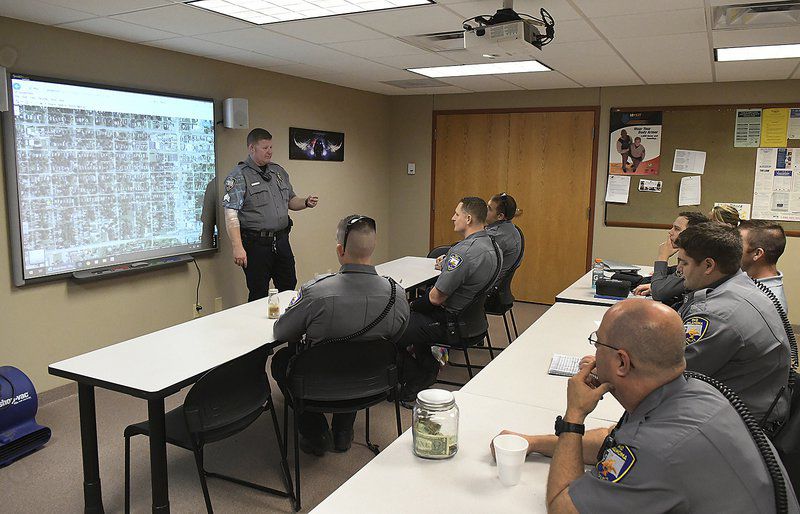 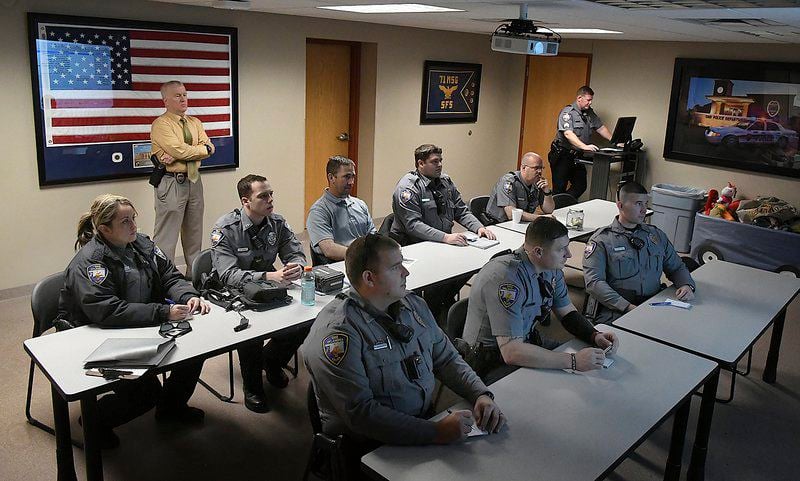 Officers are briefed about recent car burglaries during muster at the Enid Police Department Dec. 31, 2019.

Officers are briefed about recent car burglaries during muster at the Enid Police Department Dec. 31, 2019.

ENID, Okla. — Toward the end of 2019, Enid Police Department saw an increase in reports of burglaries to vehicles, both attempted and successful.

There were 70 reports of burglaries to vehicles to Enid police in October. The number increased to 101 in November and dropped to 34 for December.

"A number of arrests have been made, with the majority occurring in November when nine were arrested," Capt. Tim Jacobi said. "This coincides with the large number of reports in November followed by the large decrease in December."

Arrests continue to be made. An Enid man was charged last week with three felony counts of third-degree burglary in connection to three of December's reports.

"We are continuing to aggressively investigate these incidents and have identified several new suspects," Jacobi said. "We are using some non-traditional investigative tactics to combat these crimes, which, for obvious reasons, we won’t describe."

Jacobi said police have used every avenue available to them to encourage residents to lock their vehicles and remove, or secure, their valuables.

"We produced and shared public service video about car burglaries — all in an effort to reduce the number of incidents," he said. "The message is simple: If you lock your vehicles you will significantly lower your odds of becoming a victim of auto burglary."

The captain said the easiest solution is for vehicle owners to lock their doors.

"To illustrate that point, of the 34 reports in December only one vehicle was accessed by forced entry. All others were left unlocked," he said. "If you lock your door, you significantly reduce your chance of being a victim."

Most vehicle burglars want to remain unnoticed and won't risk being discovered in a neighborhood by breaking the glass of a vehicle's window.

"Lock your doors, secure your valuables, use common sense on where you park, utilize outdoor lighting, be a good neighbor and report suspicious activity to us," Jacobi said. "A lone burglar could easily hit 10 to15 cars or more in one night. That means that a group of burglars can victimize a significant number of people very quickly."

Jacobi said the majority of car burglaries are committed late at night or early in the morning. He said residents should immediately report any suspicious activity or people in their neighborhoods.

The captain also reminded the public of the danger leaving a loaded gun in vehicle could create following an incident early Friday morning.

Police responded Thursday night to Highpoint Trailer Park, 2700 N. Van Buren, on a report of shots fired. Officers learned someone had burglarized a vehicle parked there and taken a loaded handgun. The burglar had discharged the weapon in the trailer park and struck the window of another vehicle parked nearby.

About an hour later, officers found the man in a nearby neighborhood burglarizing another vehicle with the stolen handgun in his hand. Officers chased the burglar, who dropped the gun, into Crosslin Park. During the chase, the burglar turned back toward the officers and pointed an object believed to be a handgun at them. One of the officers responded by firing a round at the suspect, missing him.

"An unlocked vehicle is not a proper place to store your firearms and, as is illustrated by this incident, could easily result in arming a criminal," Jacobi said.