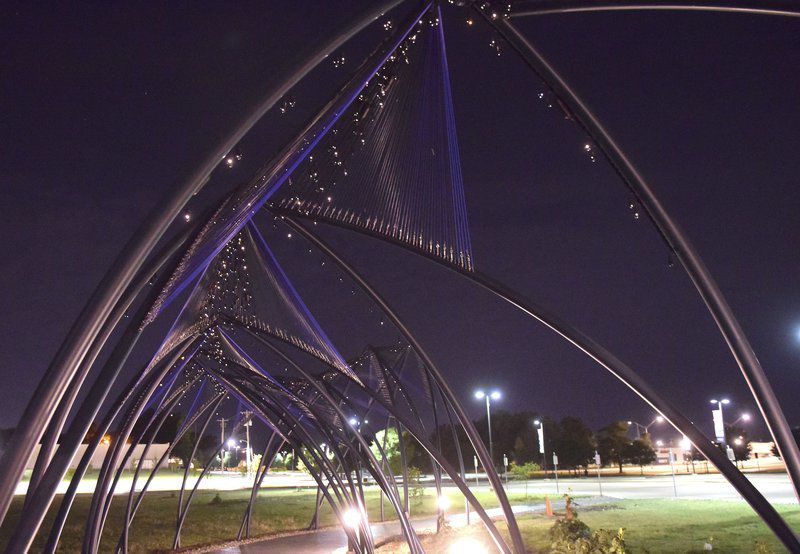 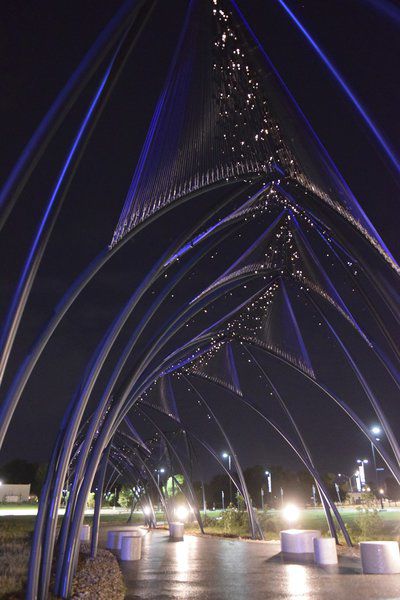 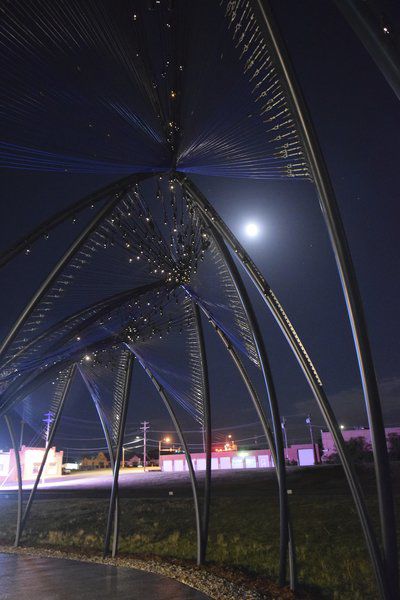 The moon shines on "Under Her Wing Was The Universe" July 2, 2020, in downtown Enid.

The moon shines on "Under Her Wing Was The Universe" July 2, 2020, in downtown Enid.

ENID, Okla. — Enid's latest public art project "Under Her Wing Was the Universe" is complete and already attracting visitors.

Owens said the project has always had its critics and she recently spoke with one.

"I just had a conversation with someone who still doesn't love the project. His complaint, and I think he represents a sizable demographic of city leaders who have a vision for Enid, was that he’s not against the project he just didn’t like this to be the use for the land," she said. "There may have been people who had an idea what should go on this land. I guess I beat them to it. I seized the moment before they did. I saw this land that wasn't being used. I knew it was flood plain, nothing could be built there. I said, 'I have an idea.' I took what otherwise would be useless property and turned it into something interesting and beautiful. I know that point of view, they're not opposed to public art they just didn't want that there. I also disagree with them, respectfully. I hope ultimately that this culminates in something we can be proud of."

She said most of the biggest critics fall into the category of those who do not want taxpayer money used for public art.

"It’s a bigger issue people have with the city of Enid than necessarily public art, and I hear about it," Owens said. "People certainly feel very entitled to share their disdain for how government dollars are spent. I turned it into 10 times what that grant was in terms of the investment. I took $20,000 and invested 10 times that amount into making something significant that will result in passive income for the city. I think even a conservative person financially would appreciate that."

"In Enid we have had a very conservative exposure to art within our borders. Very good art, very skillful, very historical, we’ve got the talent and really amazing works of art but it has been very conservative and this is not," she said. "It’s so different from anything we've seen. It's hard for people to separate their emotions about money from an aesthetic."

Owens asked those in Enid to give the installation a view that was intended, from outside their cars, but also at different times of the day and seasons.

"Most people’s experience had been driving past it, and the real magic is underneath it. If their experience is just driving past it on Park Avenue, they’re missing out on it," she said. "There’s so much more to the nuance of the experience just standing underneath, something that’s big with stars overheard. Get out of your car and go stand underneath it. There is something to be observed at any point that someone wanted to go an explore a little deeper."

The art work, situated between Grand and Independence on Park, also features a pocket prairie landscape.

"We will continue to foster the site with volunteers to make sure it gets developed into what it will ultimately become," Owens said. "Once you have a pocket prairie it will be incredibly low maintenance."

Construction is ongoing as of May 1, 2019, for "Under Her Wing was the Universe." The project has met many delays since it was approved by the…

❝The women who participated were all remarkable advocates for me and this project. It was beautiful to share this moment with them, and I'm honored by their support.❞ — Romy Owens, artist