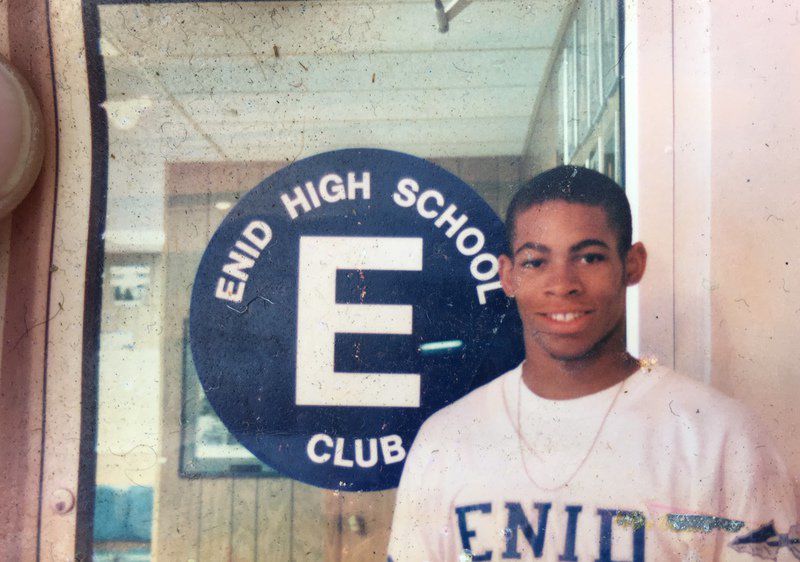 Donald Shoals, Enid High School Class of 1997, appears during his time as a four-sport letterman with the Plainsmen. (Photo provided) 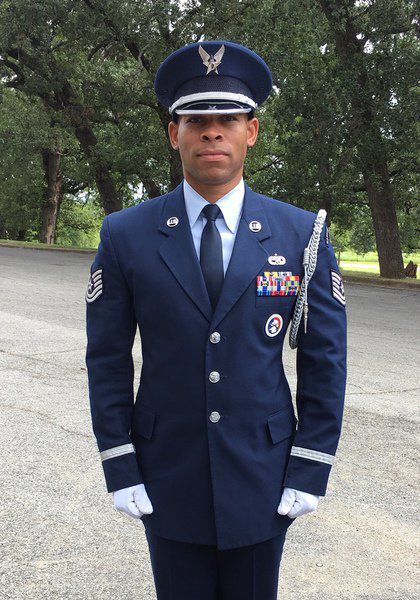 Tech. Sgt. Donald Shoals appears in dress uniform. Shoals currently is serving as a recruiter in Enid while awaiting orders to his next assignment as a weapons loader for the Air Force. (Photo provided) 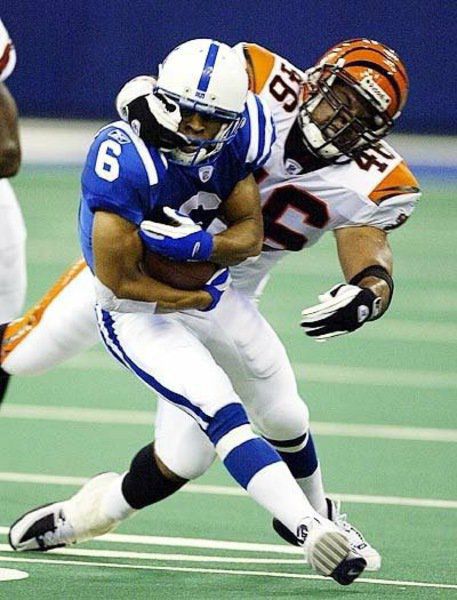 Donald Shoals is tackled by a Cincinnati Bengals player during his time as a wide receiver with the Indianapolis Colts during the 2002 preseason. (Photo provided) 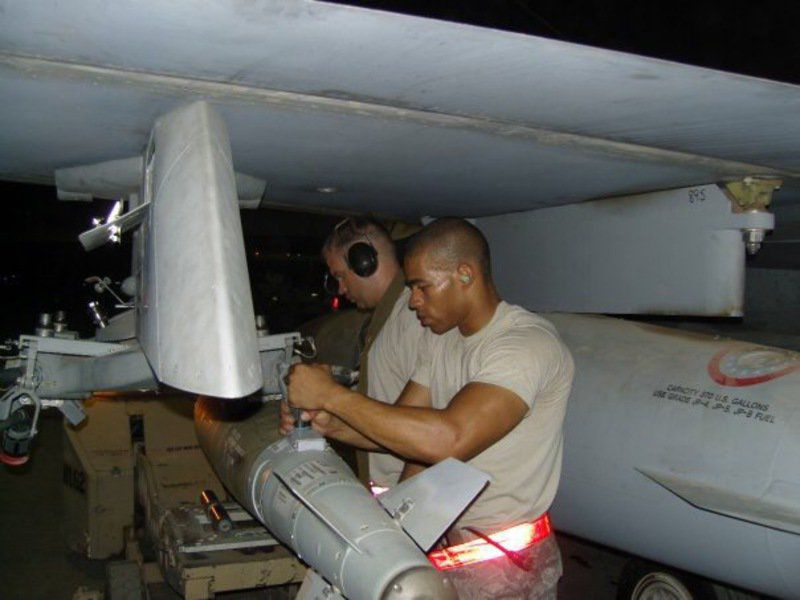 Donald Shoals, Enid High School Class of 1997, appears during his time as a four-sport letterman with the Plainsmen. (Photo provided)

Tech. Sgt. Donald Shoals appears in dress uniform. Shoals currently is serving as a recruiter in Enid while awaiting orders to his next assignment as a weapons loader for the Air Force. (Photo provided)

Donald Shoals is tackled by a Cincinnati Bengals player during his time as a wide receiver with the Indianapolis Colts during the 2002 preseason. (Photo provided)

ENID, Okla. — When Enid native Donald Shoals was picked up to play wide receiver with the Indianapolis Colts in 2002, it seemed his dreams had come true. He had no way of knowing then his dream job would be loading bombs on warplanes.

Now a technical sergeant and weapons loader for the Air Force, Shoals describes his life as “quite a journey,” going from school in Enid, to a brief term in the NFL to wartime service in the Air Force.

Shoals, who’s currently serving temporarily as a recruiter in Enid while en route to his next assignment at Eglin Air Force Base in Florida, was born in Kansas City, Mo., and came to Enid as an elementary schooler.

He quickly took to sports in his new home, and by the time he started at Enid High School he was a varsity athlete in basketball, football, track and soccer.

Shoals said his favorite sport was basketball, but his natural talents took him in another direction.

“I love basketball, but I was always better at football, so I took the route where there was opportunity for me,” Shoals said.

After Shoals graduated from EHS in 1997 he went on to play junior college football for the Fort Scott Community College Greyhounds in Fort Scott, Kan. There, he was all-conference receiver and second team all-conference punt returner, earning him scholarship offers to play football at universities on both coasts, and at the University of Tulsa.

“I got offers from a lot of schools,” Shoals said, “but I went with Tulsa because it was a way to get closer to home.”

Shoals’ college career took off in his junior year, 2000, when he tied for the fourth-leading Division I wide receiver spot with 1,195 yards, averaging almost 15 yards per catch and hauling in five touchdowns. A solid 908-yard senior season earned Shoals a nod from the NFL in 2001, when he was picked up as a free agent wide receiver and punt returner for the Colts.

“It was kind of surreal,” Shoals said of finding himself among some of the most famous names in football. It hit home early in the 2002 preseason, when a veteran player offered to help him run through plays.

“I was sitting in the locker room going through this playbook that’s like an encyclopedia, and all the sudden Peyton Manning taps me on the shoulder,” Shoals said. “He said, ‘Hey Shoals, if you need any help with that playbook just let me know.’ I was just star-struck. I couldn’t believe, ‘I’m talking to Peyton Manning right now.’”

Shoals said he loved playing alongside greats like Manning and Marvin Harrison. But, the ride was short-lived.

As the Colts preseason drew to a close, two of the team’s running backs were sidelined with injuries. When the team cut its roster to meet league caps for the regular season, Shoals said he was released from the team to make way for a running back in the high-stakes trades leading into the season.

He went on to play arena football in a short stint with the Indiana Firebirds, but said he never really adjusted to playing arena ball. For the second time in a year, Shoals found himself released from a team.

“It didn’t really bother me,” Shoals said. “I just decided I needed to move on to the next chapter of my life, whatever that was going to be.”

He moved back to Enid and put his sports science degree and athleticism to work as a personal trainer and habilitation specialist. But, there remained a nagging option planted early in Shoal’s life by his father, a Vietnam veteran.

“The military had always been in the back of my mind,” Shoals said. “My Dad had always told me I’d be good for the military, and he always said, ‘Don’t join the Marines or the Army. Go into the Air Force or the Navy — they’ll take care of you.’”

In 2004, Shoals took that advice and walked into the Air Force recruiter’s office in Enid. With a college degree in hand, Shoals had options to become an officer. But, he said he quickly determined he wanted to serve as a leader and mentor among enlisted airmen.

Shoals said the tempo of operations at Shaw was hectic, as the base worked to train three squadrons of F-16 air and ground crews for the wars in Iraq and Afghanistan.

For four years, Shoals said it was a constant pace of “train, train and then train some more,” often in 14-hour shifts. When he was deployed to Iraq in 2008, and again in 2010, Shoals said the reason for all that training quickly became obvious.

“Once I got over there, I realized what all that training was about,” Shoals said. “All that practice and hard work we did for all those years — when we finally deployed, we needed all of that.”

Shoals said his unit took rocket and mortar fire at Balad Air Base in central Iraq while loading warplanes for missions during the Iraq War troop surge of 2007-08. It was a drastic change, Shoals said, from the direction he thought his life was taking when he was picked up by the Colts.

“It’s a crazy experience,” Shoals said, “to go from playing with the Indianapolis Colts and hanging out with Peyton Manning and Marvin Harrison, and the next thing you know you’re in Iraq fighting a war.”

Reflecting on his two tours in Iraq, Shoals said he’s proud of the work the Air Force did there.

“Every bit of it mattered. It all did,” Shoals said. “A lot of young airmen don’t really understand that — they’re just doing it. But, we do it because we love our way of life and we have to protect our country.”

Looking back on his time in the Air Force, Shoals said he wishes he’d enlisted when he was 18. For other young people looking for a way to serve, along with receiving education, travel and “an awesome time,” Shoals said the Air Force may be a good fit.

“If someone wants to come in, it’s a great overall experience,” he said. “I’ve been in for 15 years, and I still look back and say, ‘Man, these young kids are lucky to be able to come into the Air Force.’”