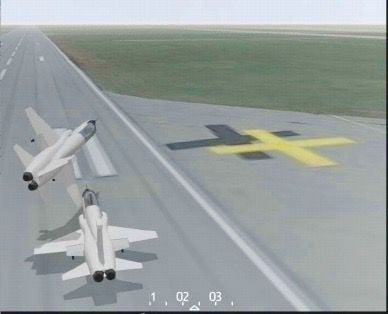 A graphic from a May 1 Air Force Accident Investigation Board report depicts the moment two T-38C aircraft collided during a formation landing at Vance Air Force Base, causing the death of a student pilot and his instructor pilot. The Air Force confirmed Wednesday, May 13, 2020, it ceased formation landings in undergraduate pilot training on March 5, 2020, two months before it released the AIB report. 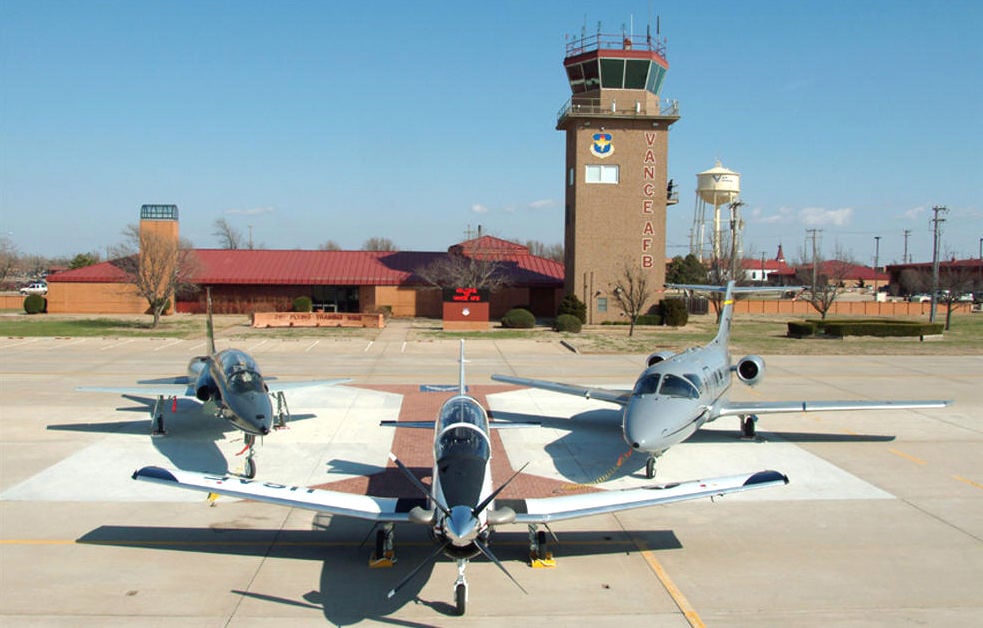 A graphic from a May 1 Air Force Accident Investigation Board report depicts the moment two T-38C aircraft collided during a formation landing at Vance Air Force Base, causing the death of a student pilot and his instructor pilot. The Air Force confirmed Wednesday, May 13, 2020, it ceased formation landings in undergraduate pilot training on March 5, 2020, two months before it released the AIB report.

VANCE AIR FORCE BASE, Okla. — The Air Force has ceased formation landings as part of its undergraduate pilot training after a November 2019 crash of two T-38C aircraft at Vance Air Force Base claimed two lives.

On Nov. 21, 2019, instructor pilot Lt. Col. John “Matt” Kincade, 47, and student pilot 2nd Lt. Travis Wilkie, 23, were flying at the left wing of a second T-38 to the center runway at Vance, a formation landing, when their aircraft collided with the lead T-38, rolled over top of it and landed inverted off the runway.

Kincade and Wilkie were killed on impact, according to an Air Force Accident Investigation Board (AIB) report released May 1. The report cited pilot error on the part of both Wilkie and Kincade as the cause of the collision.

AETC confirmed Wednesday the Air Force suspended formation landings from all undergraduate pilot training on March 5, 2020, almost two months before the Air Force released the AIB report and more than three months after the fatal crash at Vance.

In a released statement, AETC said the Air Force is "constantly evaluating our training programs to ensure we provide the best possible pilots for our Air Force."

"Following an Air-Force wide review, we adjusted our syllabi to reflect the requirements of our fifth generation Air Force and advances in avionics," according to the statement.

While the statement covers formation landings in undergraduate pilot training, the News & Eagle is waiting for response from AETC as to whether or not formation landings will continue in major weapons system training or in operational squadrons.

The Wilkie family, members of whom were notified of the cessation of formation landings in undergraduate pilot training on Monday, raised questions in a written statement as to why the Air Force waited two months to announce the change.

"In January of 2020, the family ... petitioned the Air Force to halt T-38 formation landings following their son’s death," read a statement provided by family spokesperson Sara Fraunces. "Since that time the Wilkies have submitted numerous written inquiries as to the status of T-38 formation landings, if they were continuing and, if so, with what rationale.

"It is unclear why the Air Force elected not to disclose this earlier to the family ... nor to news media following this story," the statement reads.

In a separate statement, Wilkie's parents, Carlene and Don Wilkie, of San Diego, Calif., said the Air Force's decision to cease formation landings "underscores and substantiates the failure of Air Force leadership to discontinue an archaic and dangerous training requirement, in a tired 58-year-old plane, before it took the life of our son Travis and his instructor pilot.

"We view it as a clear admission of culpability in contributing to the accident," the Wilkies wrote. "It was misleading and unjust not to acknowledge formation landing as a contributing cause in their report and subsequent press release. We are relieved that student pilots will no longer be required, nor instructor pilots permitted, to perform an inherently dangerous maneuver with no benefit to their development as combat fighter pilots."

No response to the Wilkies' statement from AETC or the Air Force was immediately available Wednesday morning.

The Northrop T-38 began service in Air Force undergraduate pilot training in 1962, underwent upgrades in avionics and was rereleased as the T-38C in 2000 and has since "undergone a programmed service life extension program with updates to the engines, ejection seats, and structural components," according to AETC.

Each aircraft used in training is "certified as mission capable by professional maintenance teams, and undergoes full nose-to-tail 'phase' inspections every 450 flight hours," according to AETC.

There have been 14 Class A mishaps in the T-38C since 1998, eight of which have been fatalities. The AIB report did not cite maintenance or aircraft operability as a factor in the Nov. 21 crash.

The T-38C is scheduled to be replaced by the T-7 Red Hawk in the next three years.