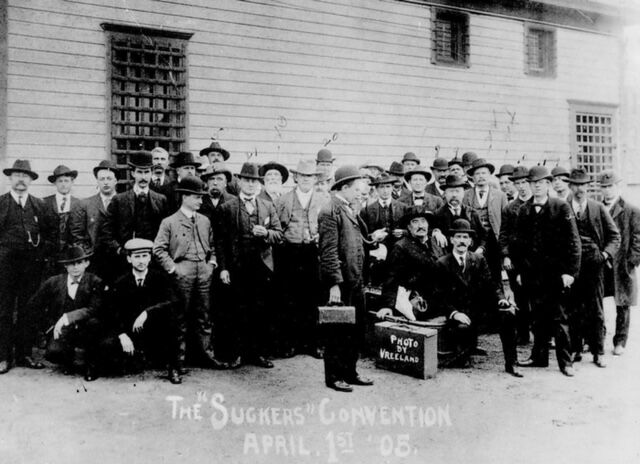 Nearly all of Enid’s town leaders were the victims of an April Fool's Day joke in 1905. This photo commemorates the event and was taken by photographer George Vreeland. 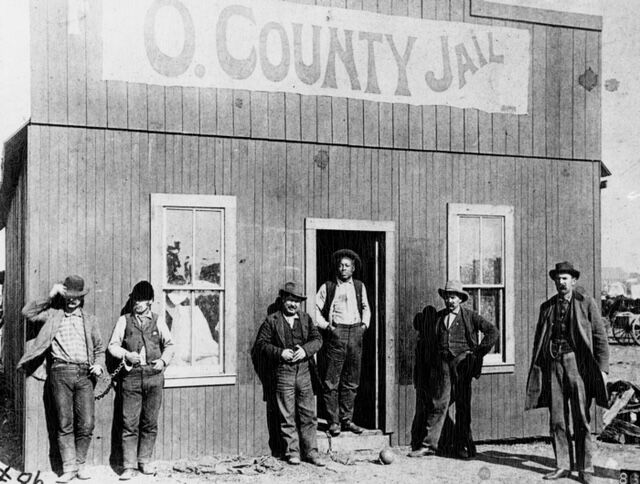 The jail on the west side of Enid’s town Square in 1905 was the location of an elaborate joke that suckered most of Enid’s town leaders on April Fool’s Day 1905.

Nearly all of Enid’s town leaders were the victims of an April Fool's Day joke in 1905. This photo commemorates the event and was taken by photographer George Vreeland.

The jail on the west side of Enid’s town Square in 1905 was the location of an elaborate joke that suckered most of Enid’s town leaders on April Fool’s Day 1905.

ENID, Okla. — On April 1, 1905, the city of Enid became the host for the very first (and very last) “Sucker’s Convention” conducted anywhere. The main character in the scheme was actually an empty beer bottle that suckered them all.

It seemed like a typical Saturday. George Emrick, the owner of Enid Transfer Co., was visiting with his father, who was the chief of police. In the conversation, George told his father that Enid was prospering, wheat is good and $50,000 in bonds were just sold to improve the city waterworks and a street railway franchise. Enid’s own Walter Frantz, a pitcher for the Kansas City Blues, was in fine form that season. The talk of the town was the big capture made by Eugene Watrous, deputy game warden. He had seized two trunks full of 1,000 stolen quail that were being sent to Chicago. The thief was arrested and fined $25 for each bird, for a total of $25,000,

Over on the west side of the courthouse Square, just south of Broadway, sat an old wooden ramshackle jail. The jailer, Tom Cannon, was picking up some trash outside of the jail when he came across a “dead soldier” on the ground and picked it up. In those days, an empty beer bottle often was referred to as a “dead soldier.”

Tom’s friend was attorney Charles West, a young aspiring lawyer. Since it was April 1 — April Fool’s Day — Tom decided to be clever, and he called his friend West and told him he had a soldier prisoner in the jail who was “dying” and had personally asked for West to do his will because he trusted him. He told West he had $50 for him if he could hurry right over.

West gathered the necessary papers and ran to the jail. Cannon met West in front of the large board wall that surrounded the jail. A very solemn procession began to the inside of the jail, where Cannon unlocked the outer doors carefully and locked them as they passed within. On a cot, in the rear, lay the “prisoner” under a blanket. With flair, Cannon pulled off the blanket and yelled “April Fool” as West just stared at the empty beer bottle.

West, who would later become Oklahoma attorney general, realized he’d been had and decided it was a great opportunity to sucker everyone.

The attorneys in town were the first to be suckered as they were told the same story as West and hustled to the jail to earn the $50. Among the crowd were Horace Greely McKeever, a very prominent attorney who ran for governor. Both Judge William Oliver Cromwell, who was Oklahoma’s last territorial attorney general, and Judge James B. Cullison, who served on the 20th Judicial District bench, came, as did fellow attorney Houstin James, father of Marquis James. It was Houstin who raised $45,000 to build the first brick courthouse in Enid without increasing taxes. Other attorneys who came running were M.A. Walker, Carl Kruse, Dan Huett, Charley Parker — who would later become a judge — D.W. Buckner and Scott Denton.

Dr. Kelso was the first to arrive with 45 pounds of lint, cotton and lined bandages and a full chest of amputating tools. He pulled off his coat and rolled up his sleeves to examine the victim — which he discovered was a beer bottle. Drs. Champion, McKinsey, Bowers, Boyle, Wilson and Haldeman were next to show up.

The joke at the jail took on a life of its own. Frank Letson, the banker, and former Mayor Charles O. Woods proved to be gullible, followed by J.L. Isenberg, the editor of the Enid Daily Wave, who was told there was a hot story developing at the jail. Charles Campbell, known throughout Western Oklahoma as one of the best and most fearless gunfighters, even showed up. Charles Wilson, who helped lay out the county, was there as was grain and coal dealer Roy Wirt. Eugene McConkay, the photographer, rushed over as soon as he was called, as did W.B. Penniman, the local funeral director, who came with his wicker box for body removal.

The headline in the April 3, 1905, Enid Daily Wave claimed “The Greatest All Fool’s Day in the History of Enid: The Call Came from the Jail and to Jail All Went. It was Laughable.” As each sucker appeared at the jail, he was let in with a solemn procession to uncover the beer bottle. All the previous suckers hiding nearby would jump up and shout “April Fool.” McConkay even called his boss, George Vreeland, to bring over more flash powder.

Editor Isenberg rushed back to the newspaper to write an article on the Suckers Convention, but his story failed to include that he also was one of the suckers. Oddly, as he had a disagreement with Judge Cromwell, he would only print the judge’s name in lower-case letters.

The jail became quite crowded with 40 people all admitting to being downright suckers. They all gathered for a picture and cherished the memory. The incident is proof that the people of Enid have always had a sense of humor and a forgiving heart.

The best April Fool joke on them all was the only one who made any money that day was George Vreeland, who took the picture of the 40 genuine April Fool Suckers at the only and best-ever Suckers Convention in Enid.

Information and photos for this article were gathered from archives of the Enid Daily Wave, Enid Daily News and Cherokee Strip Regional Heritage Center.