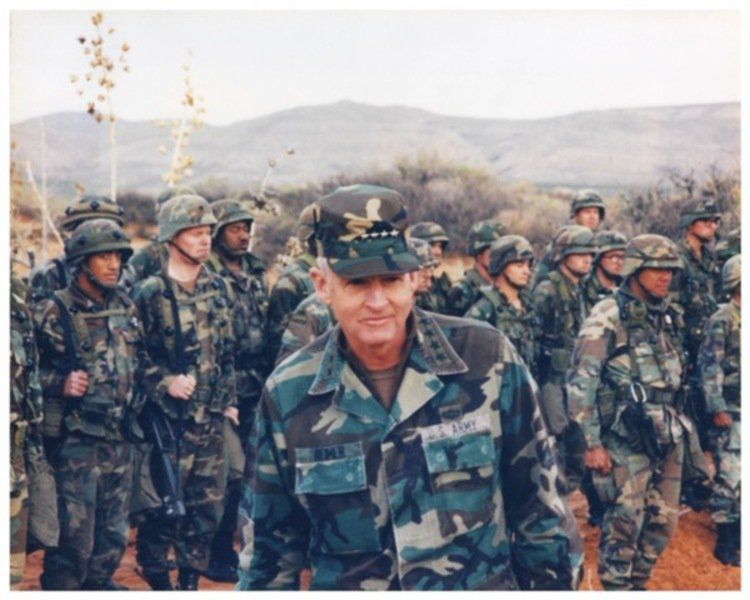 General Dennis Reimer, an Enid and Medford native who recently retired as president of Army Emergency Relief, is seen in the 1990s with some of his beloved troops at the National Training Center, Fort Irwin, Calif. 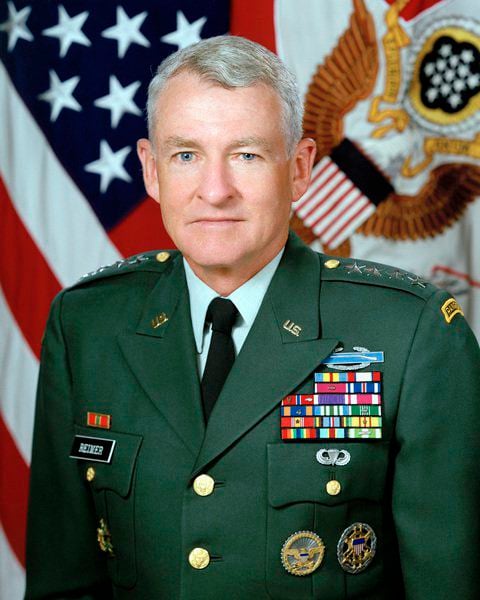 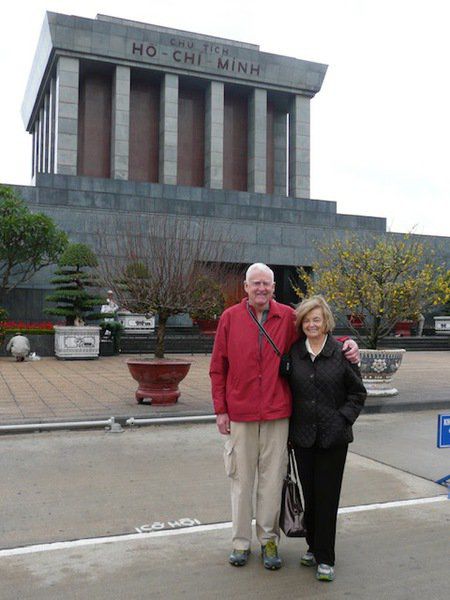 Retired Gen. Dennis Reimer and his wife, Mary Jo, stand outside the mausoleum of Ho Chi Minh in Hanoi, Vietnam, during a 2012 return trip to the country where Reimer served with the U.S. Army in the 1960s. 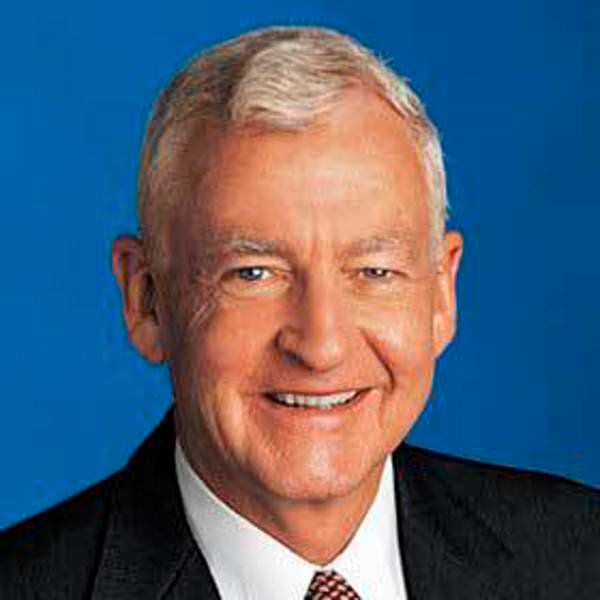 General Dennis Reimer, an Enid and Medford native who recently retired as president of Army Emergency Relief, is seen in the 1990s with some of his beloved troops at the National Training Center, Fort Irwin, Calif.

Retired Gen. Dennis Reimer and his wife, Mary Jo, stand outside the mausoleum of Ho Chi Minh in Hanoi, Vietnam, during a 2012 return trip to the country where Reimer served with the U.S. Army in the 1960s.

ENID, Okla. — Enid and Medford native retired Gen. Dennis Reimer, former chief of staff of the United States Army, capped off a career of more than six decades on Dec. 31, 2019, with his retirement from Army Emergency Relief.

Reimer stepped down at the end of the year from his position with Army Emergency Relief (AER), an Arlington, Va.-based nonprofit that assists Army soldiers and their families during times of financial hardship.

The recent retirement is the culmination of a life of service that started in Enid, where Reimer was born in 1939. He, his parents and two siblings lived in Medford, where his father worked as a mechanic and his mother was a home-maker and cook at the high school.

Reimer credits his upbringing in Medford with many of the lessons that have carried him through his career.

"I was fortunate to have really wonderful teachers and role models," he said, "and I was so fortunate to grow up in that small town with that group of teachers."

When it came time to look at colleges, the family's finances ruled out most conventional options. He found an option during study hall one day in his senior year, when he came across a pamphlet for the United States Military Academy at West Point. With no military background in his family, West Point wasn't a natural choice, but Reimer said, "it sounded pretty good to me, particularly that there was no tuition, and that they'd pay you a little bit while you were in school."

He interviewed for an appointment to the service academy with U.S. Congressman Page Belcher, who then lived in Enid and represented Oklahoma's 1st Congressional District. Reimer did not receive an appointment to West Point on his first try and opted to attend Northwestern Oklahoma State University in Alva, with the thought of transferring after two years. However, later that year, Congressman Belcher's office called back, when another spot came open, and Reimer was admitted to the West Point Class of 1962.

A highlight of his time at West Point came at Army's first game against the U.S. Air Force Academy, at Yankee Stadium, where he met his future wife, Mary Jo. In athletics, Reimer was on the founding squad of Army's rugby team. To this day, Reimer can quote from memory passages of Gen. Douglas MacArthur's May 12, 1962, "Duty, Honor, Country" speech at West Point, given several weeks before his graduation.

"'Duty, Honor, Country' — those three hallowed words reverently dictate what you ought to be, what you can be, what you will be," MacArthur told the cadets.

Reimer recalls it as "probably the most memorable speech I've ever heard in my life," followed by John F. Kennedy's speech at his graduation on June 6, 1962. The president told the cadets "I hope you realize and I hope all Americans realize how much we are counting on you."

After graduation, Reimer and Mary Jo married during a break from his Ranger training on a cold December day in Fargo, N.D.

"It was 28 degrees below zero, so we figured it could only get warmer from there," Reimer recalled with a laugh.

He went on to complete artillery training at Fort Sill and served two tours in Vietnam — in 1964-1965 as an advisor to the South Vietnamese Army with Military Assistance Command Vietnam and again in 1968-1970 with the 9th Infantry Division. Reimer said it was a hard time to be in the Army and a hard time for America.

"Vietnam was tough, from the standpoint of the nation really going through a tough period of time," Reimer said. "We were fighting a war we didn't really understand ... and we had an Army that wasn't as professional as it should have been."

High turnover among both officers and soldiers, senior leadership that was "more about careerism than professionalism" and lack of mission clarity all made it hard to effectively fight the war, Reimer said.

"We all did our best," Reimer said, "and we paid a heavy price for that war, not only in the standpoint of the number of people killed — and every time I pass the Vietnam Memorial I am reminded of how many people we lost over there — we also, as a nation, were bitterly split."

After Vietnam, Reimer said the Army went through a hard transformation into a more professional, all-volunteer force. He went on to serve in operational and command posts throughout the United States and in Germany and South Korea, including a stint in 1984 to 1986 as commanding general, 3rd Corps Artillery, at Fort Sill.

Reimer said the Army, through the Cold War, remade itself as "a very high-quality Army of good people who understood the mission ... all focused on trying to do the right thing."

He described the Cold War as a "very dangerous, but very predictable time." The last gasp of that predictability and clearly-defined objectives came in Operation Desert Storm, the 1991 operation to expel Iraqi forces from Kuwait, during which Reimer was a three-star general serving at the Pentagon.

After that, Reimer said the Army had to go through another period of transformation, changing from a "threat-based force to a capability-based force," to meet the demands of a far less stable and predictable world.

From 1991, through his time as Army Chief of Staff from 1995 to 1999, when he retired from active duty, Reimer said the Army had to adapt to serve in a world defined by VUCA — an Army acronym for "volatility, uncertainty, complexity and ambiguity."

Reimer continued to face the fall-out of the "VUCA world" after he retired from the Army in 1999. He was called on by then-Governor Frank Keating to lead the National Memorial Institute for the Prevention of Terrorism in Oklahoma City, where he remained until 2005.

He and Mary Jo moved to Arlington, Va., in 2005 to be closer to their adult children and their grandchildren, and it was there in 2009 Reimer became president of Army Emergency Relief (AER).

AER was founded in 1942 to help soldiers and their families handle financial burdens, especially those brought on by their Army service.

From 1942 to 2001, AER awarded $1 billion in assistance to soldiers. Since 2001, with wars in Afghanistan and Iraq, deployments lasting more than a year and soldiers making as many as five combat deployments, Reimer said AER has assisted soldiers and their families with another $1 billion in aid, now handing out about $70 million per year to about 40,000 soldiers.

While his time as Army chief of staff normally captures attention, Reimer said his time helping soldiers and their families through AER was perhaps the highlight of his career.

After making 27 moves in 37 years with the Army, Reimer said he and Mary Jo plan to stay put in Arlington, Va., in their retirement years.

Reimer will continue to serve on the board of American Armed Forces Mutual Aid Association, a not-for-profit insurance and financial planning firm serving military members, and periodically shares his leadership lessons with corporate leaders through the for-profit Thayer Leader Development Group, based in West Point, N.Y.

And, for fun, at more than 80 years old, Reimer still runs in the Army's 10-mile race in Washington, D.C.

"I feel like I left an Army that was better than the Army I joined," Reimer said. "That was not just something I did. A lot of people put in a lot of work.

"It was always an important thing to do, and I didn't have any problem going to work because it was important work, and I was working with wonderful people. It was an honor to serve the American people, and I really appreciate the support the American people have given us over the years."

Asked if he had any closing thoughts on his career, Reimer deflected attention from himself, to the soldiers he's loved leading and serving for six decades.

"It's not about me," Reimer said. "It's about our soldiers, and it's about the work AER is doing to serve them."