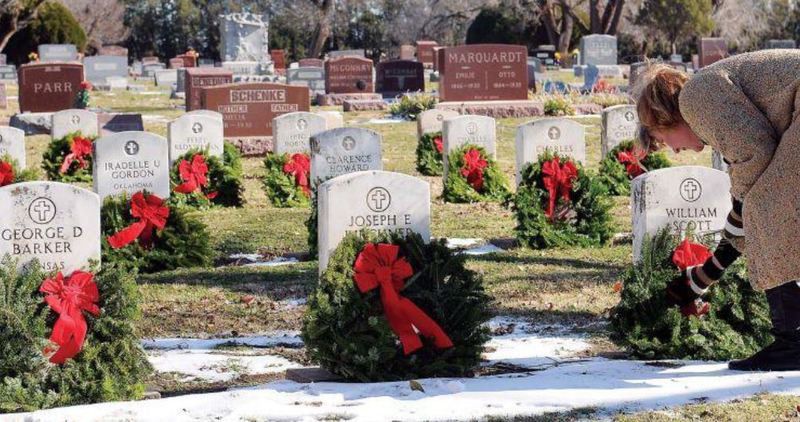 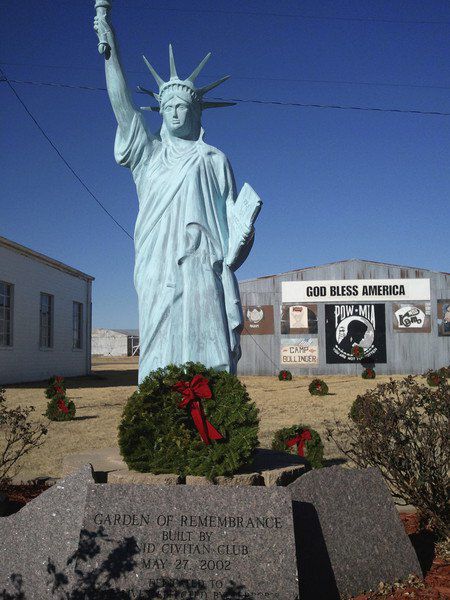 A wreath is placed in the Garden of Remembrance at Woodring Wall of Honor and Veterans Park to honor the sacrifices of veterans. (Photo provided) 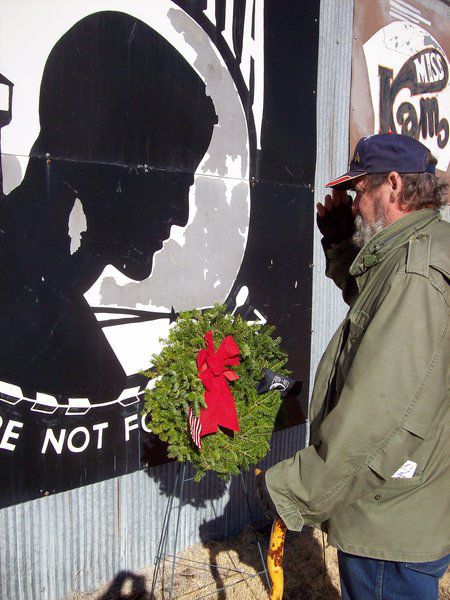 A veteran shows his respects at a wreath placed at Woodring Wall of Honor and Veterans Park to honor prisoners of war and those missing in action. (Photo provided)

A wreath is placed in the Garden of Remembrance at Woodring Wall of Honor and Veterans Park to honor the sacrifices of veterans. (Photo provided)

A veteran shows his respects at a wreath placed at Woodring Wall of Honor and Veterans Park to honor prisoners of war and those missing in action. (Photo provided)

ENID, Okla. — Woodring Wall of Honor and Veterans Park will be placing wreaths on veterans' graves in December and is offering families an opportunity to purchase a wreath to have their loved one's grave included in the honor.

The effort, part of the annual Wreaths Across America project, will include a ceremony at 11 a.m. on Dec. 14 at the Veterans Park, when six ceremonial wreaths will be placed to "remember all soldiers, sailors, airmen and Marines who served, honor their sacrifices and teach our younger generations about the high cost of our freedoms," according to an event press release.

Elaine Johns, executive director of Woodring Wall of Honor and Veterans Park, said the wreath project was adopted in Enid in 2012 "as a way to honor the losses we had in the War on Terrorism, and we felt it was a very fitting way to honor those more recent losses, in addition to the ceremonies we have to honor our losses in World War II, Korea and Vietnam."

Johns said the project "fell by the wayside" for several years as larger projects took precedence, but now the volunteers at Woodring Wall of Honor are ready to take it back up.

"Now that we're established with our veterans' park and our educational center, and we have a place for people to come to, it's feasible for us to pick up that mission again," Johns said, "and teach our young people about the sacrifices of our armed forces, and resurrect that patriotism we feel all Americans should display."

Most importantly, Johns said, "it's a way to let the families know we don't forget their sacrifices."

Specially designed wreaths for the Army, Marines, Navy, Air Force, Coast Guard/Merchant Marines and POW/MIA will be placed at the base of each flag in the park during a ceremony that will be coordinated simultaneously at more than 750 locations across the country, according to the press release.

Members of the community can purchase wreaths to place on their own loved one's grave or sponsor one of the wreaths Woodring Wall of Honor will place at the Vietnam Memorial Wall and Enid Cemetery.

Families who would like to place a wreath themselves will be contacted to pick up their wreath at Woodring Wall of Honor during the week of Dec. 9.

Deadline to order wreaths is Nov. 1.