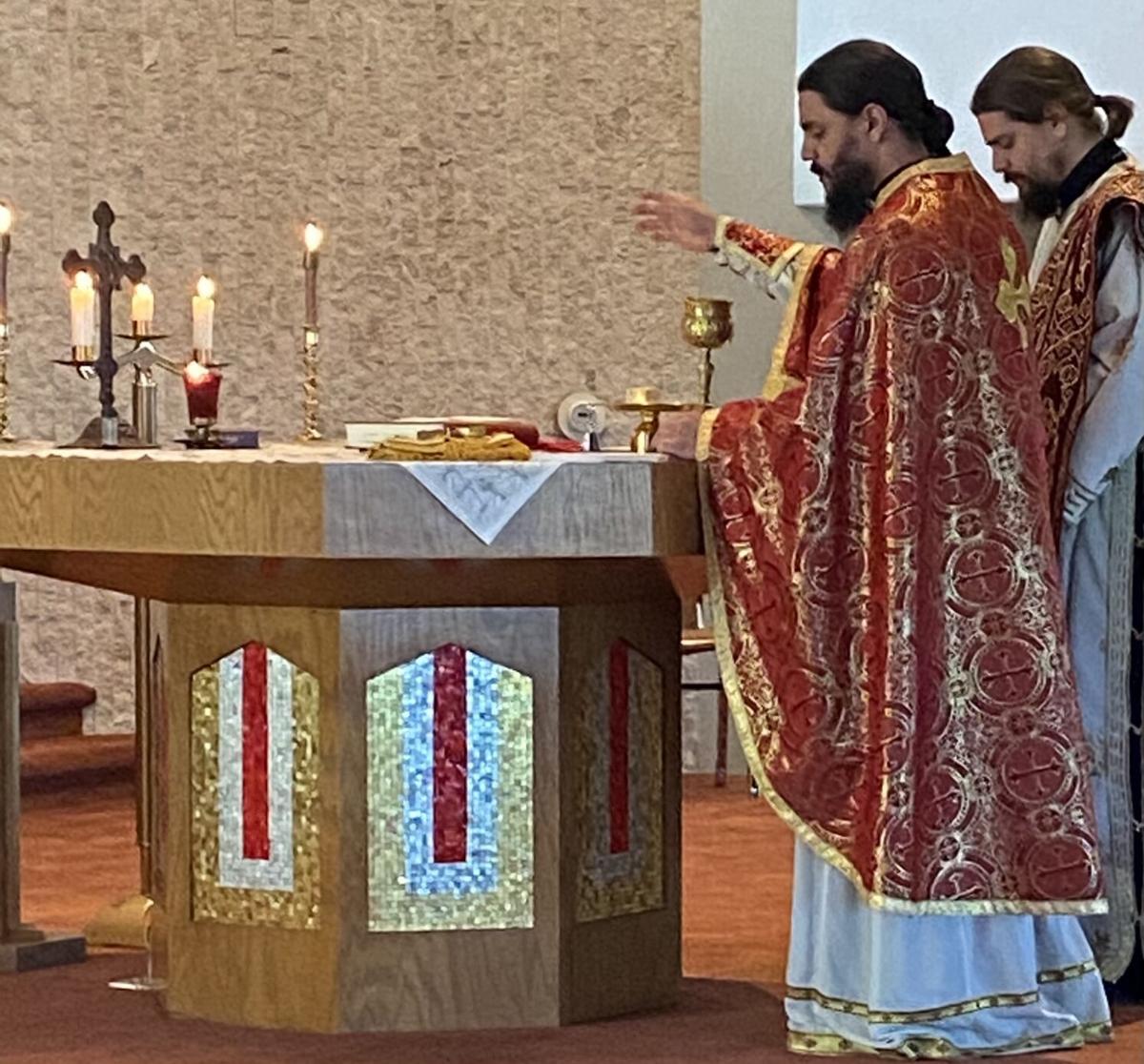 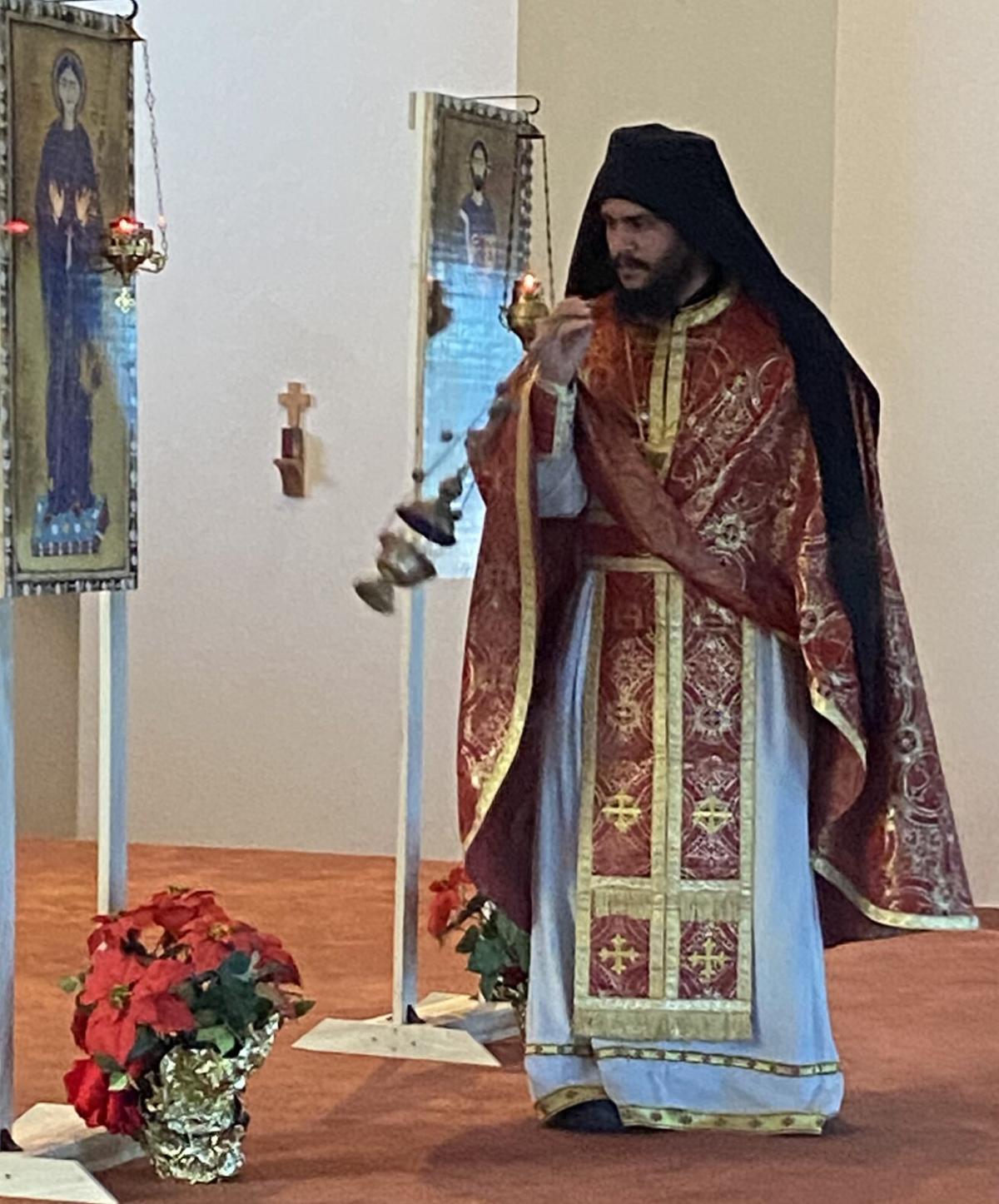 Fr. Athanasios administers incense before an icon of the Theotokos — Orthodox term for Mother of God, or Virgin Mary — in the sanctuary of St. Iakovos New Studion monastery, near Piedmont. (James Neal / Enid News & Eagle) 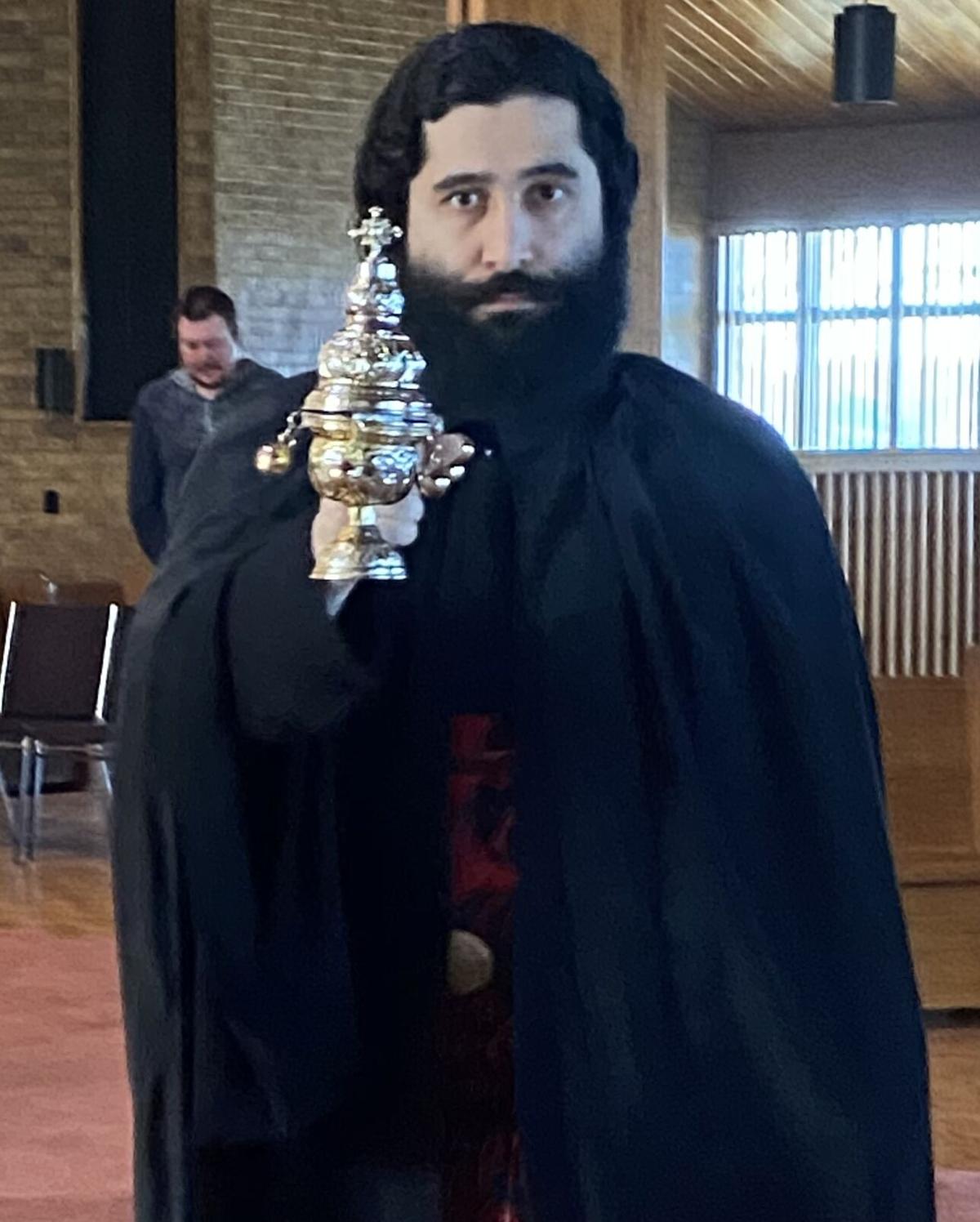 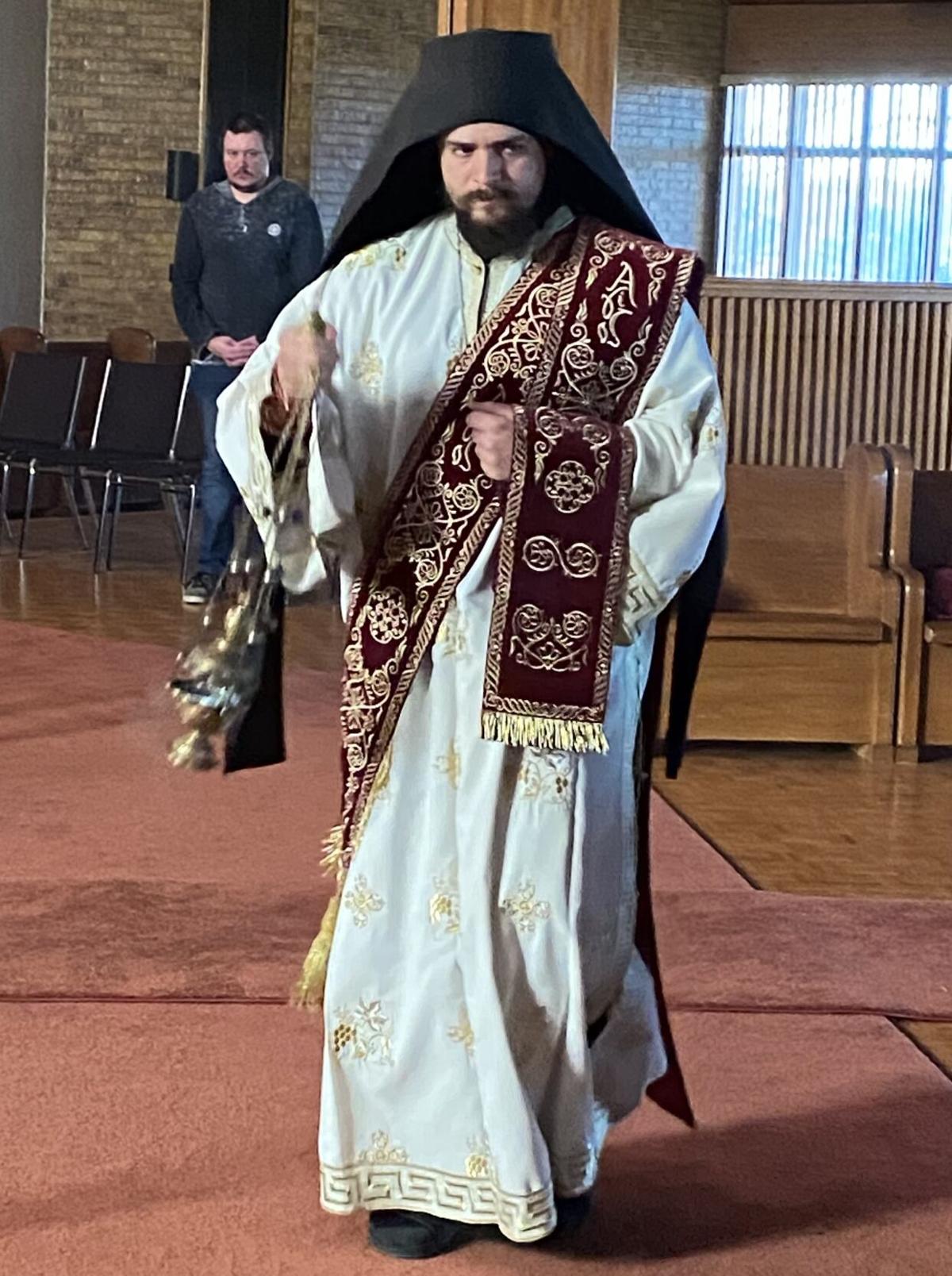 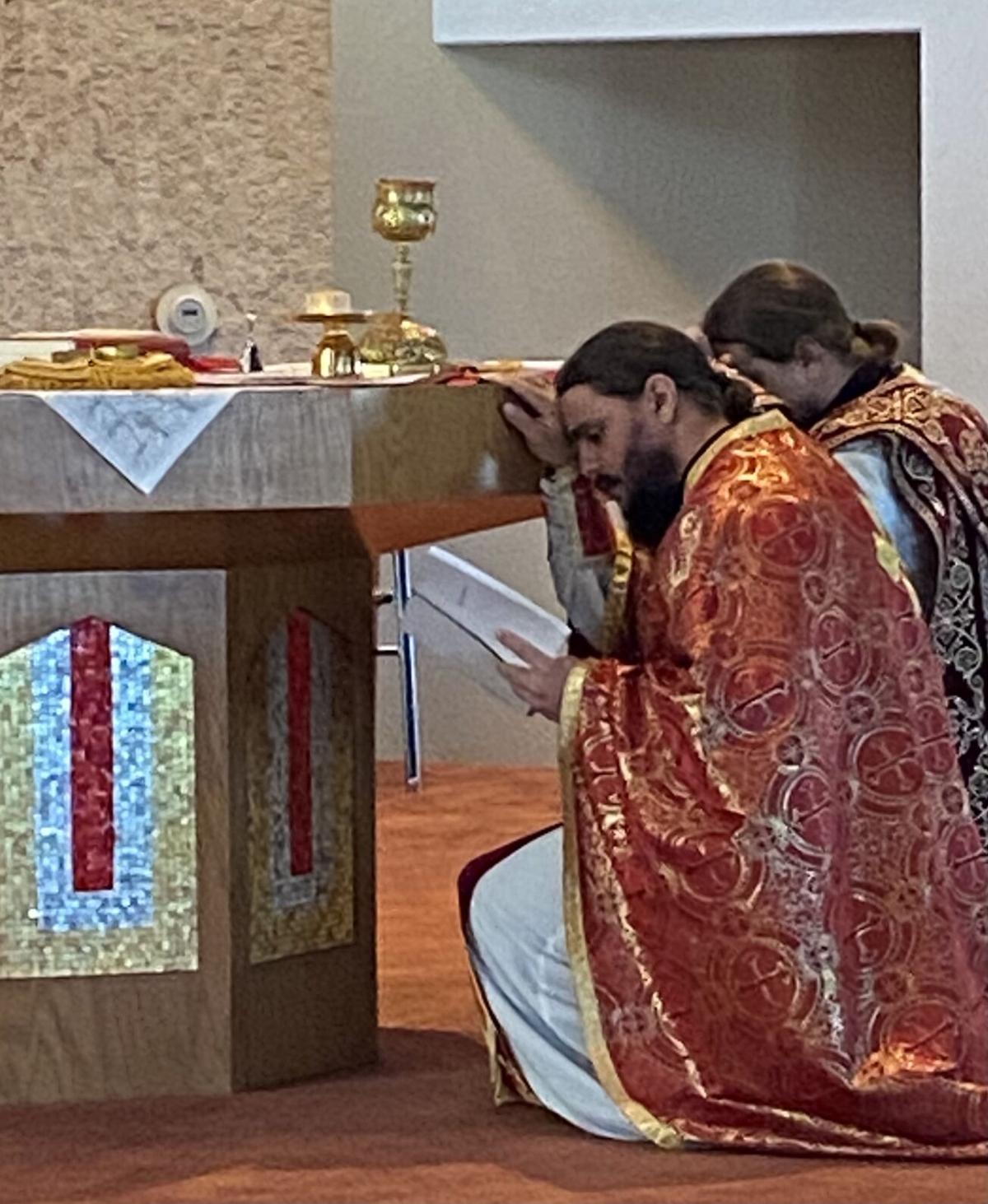 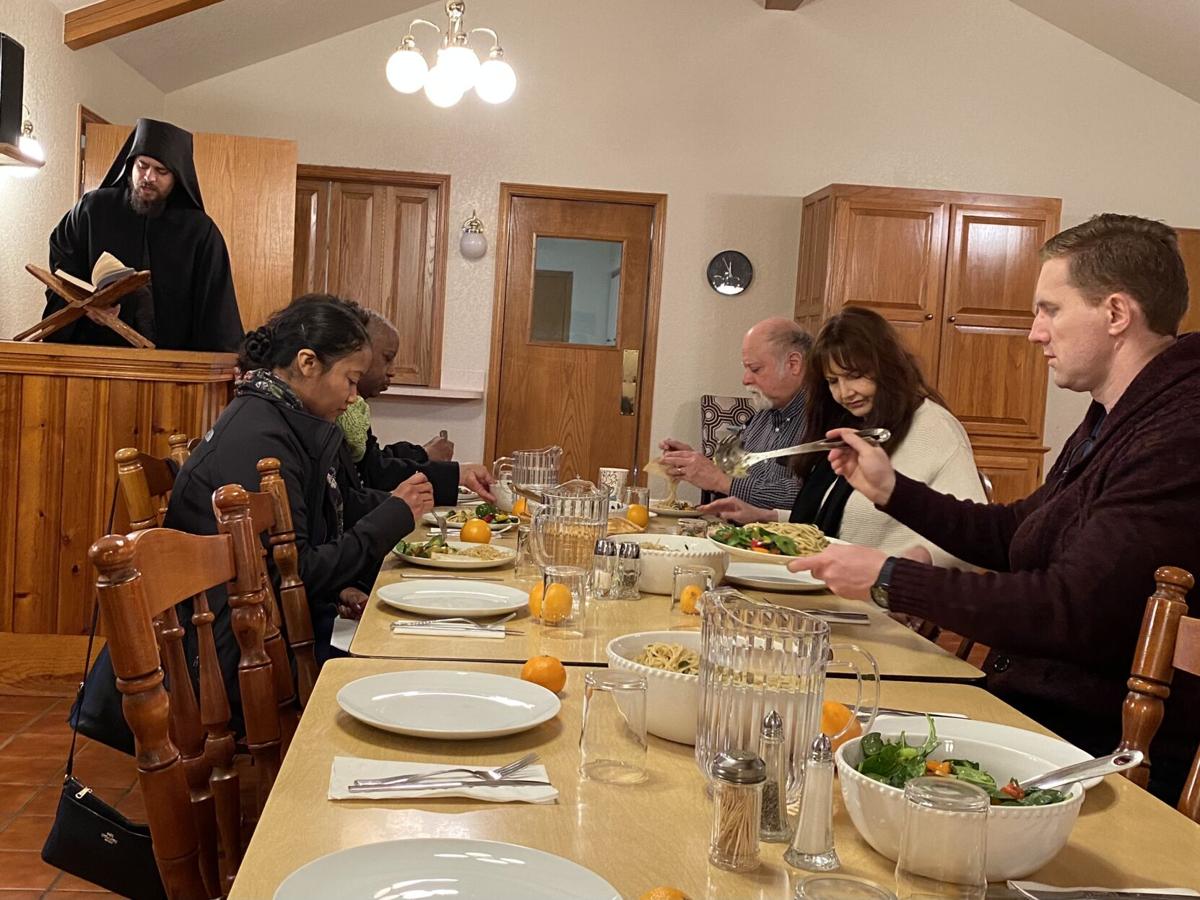 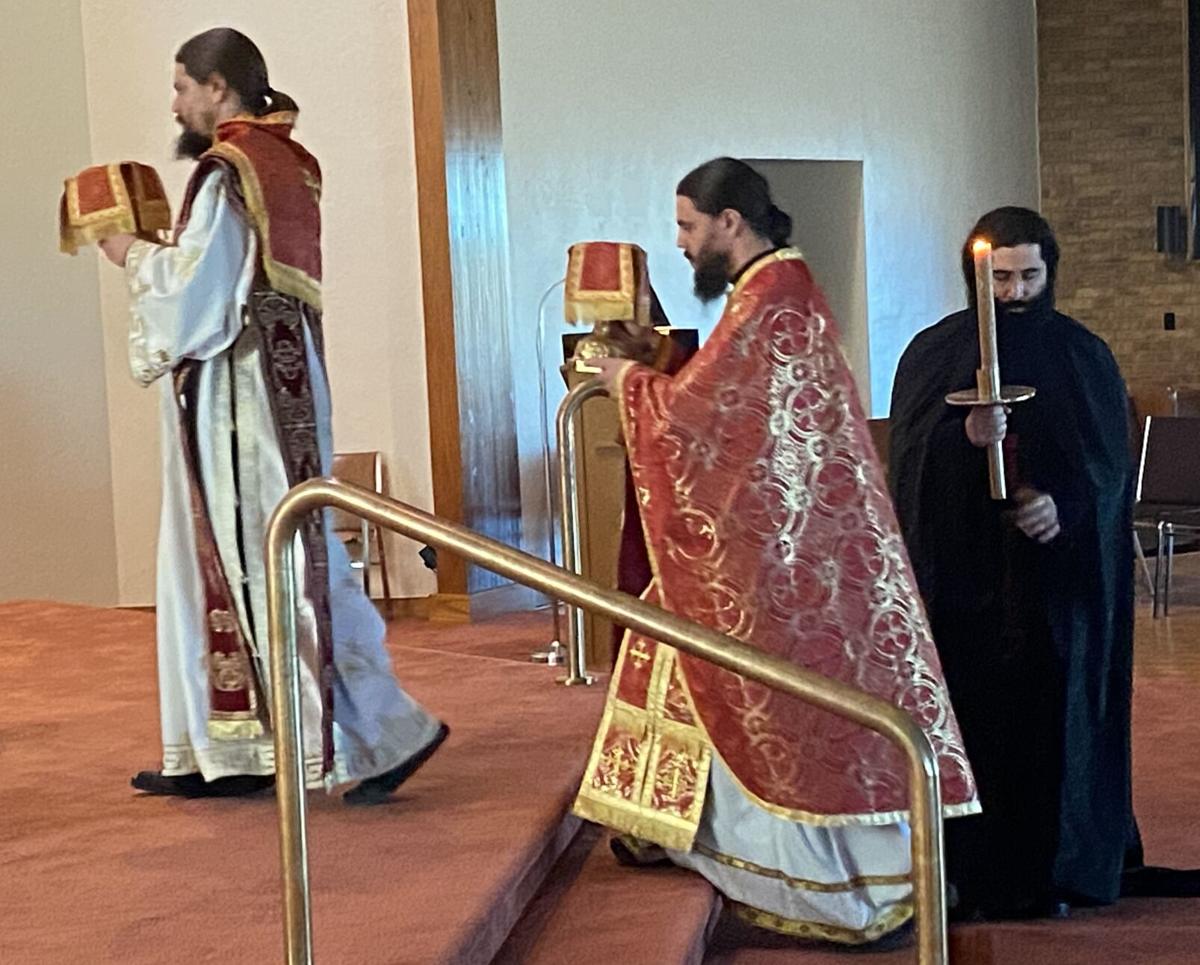 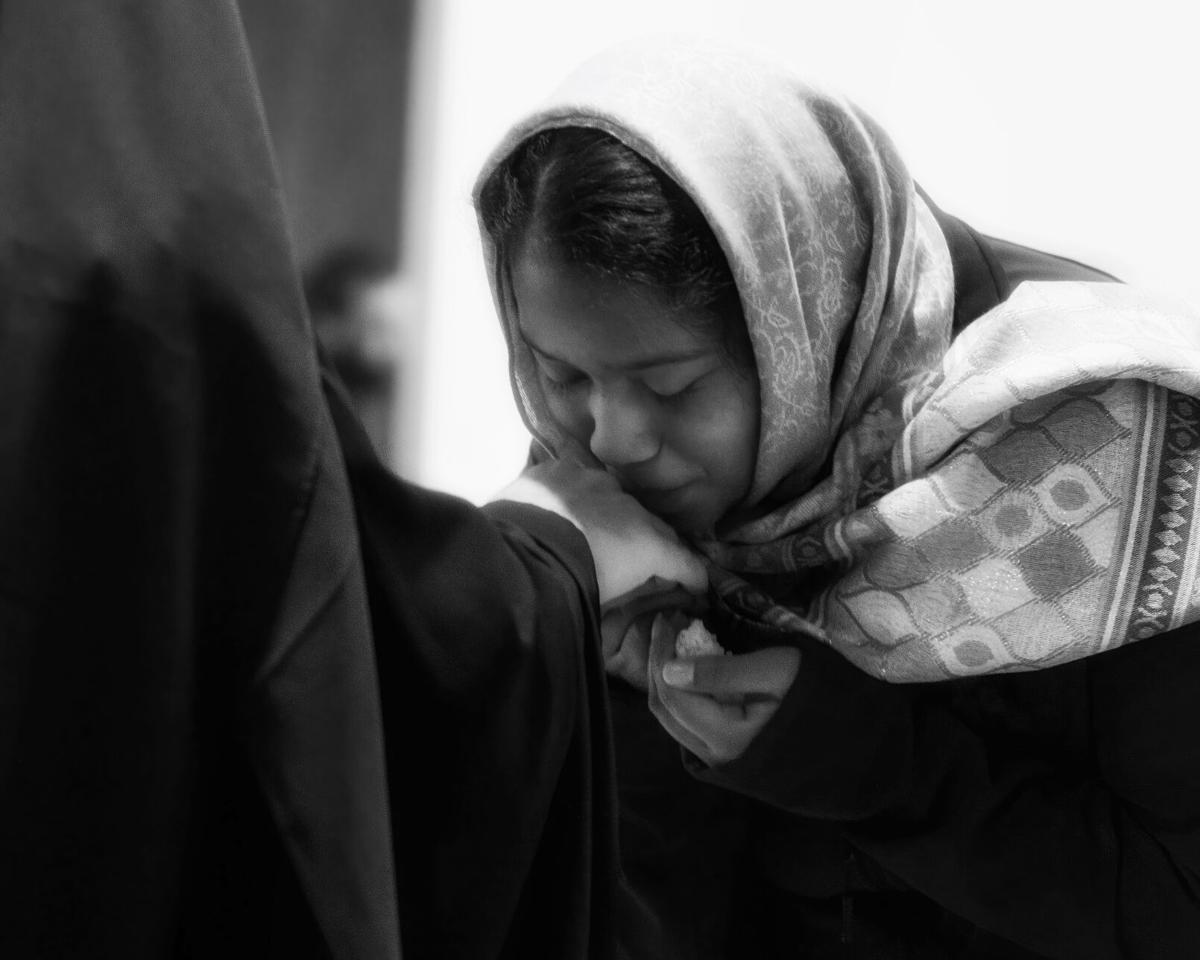 Sophia Samuel kisses the hand of Bishop Saba, presiding bishop of the Georgian Orthodox Diocese in North America, during the consecration of St. Iakovos New Studion monastery, Nov. 26 2020. It is an Orthodox Christian tradition to kiss the hand of a priest or bishop used to deliver the Eucharist, or Communion, to the faithful. (Photo provided) 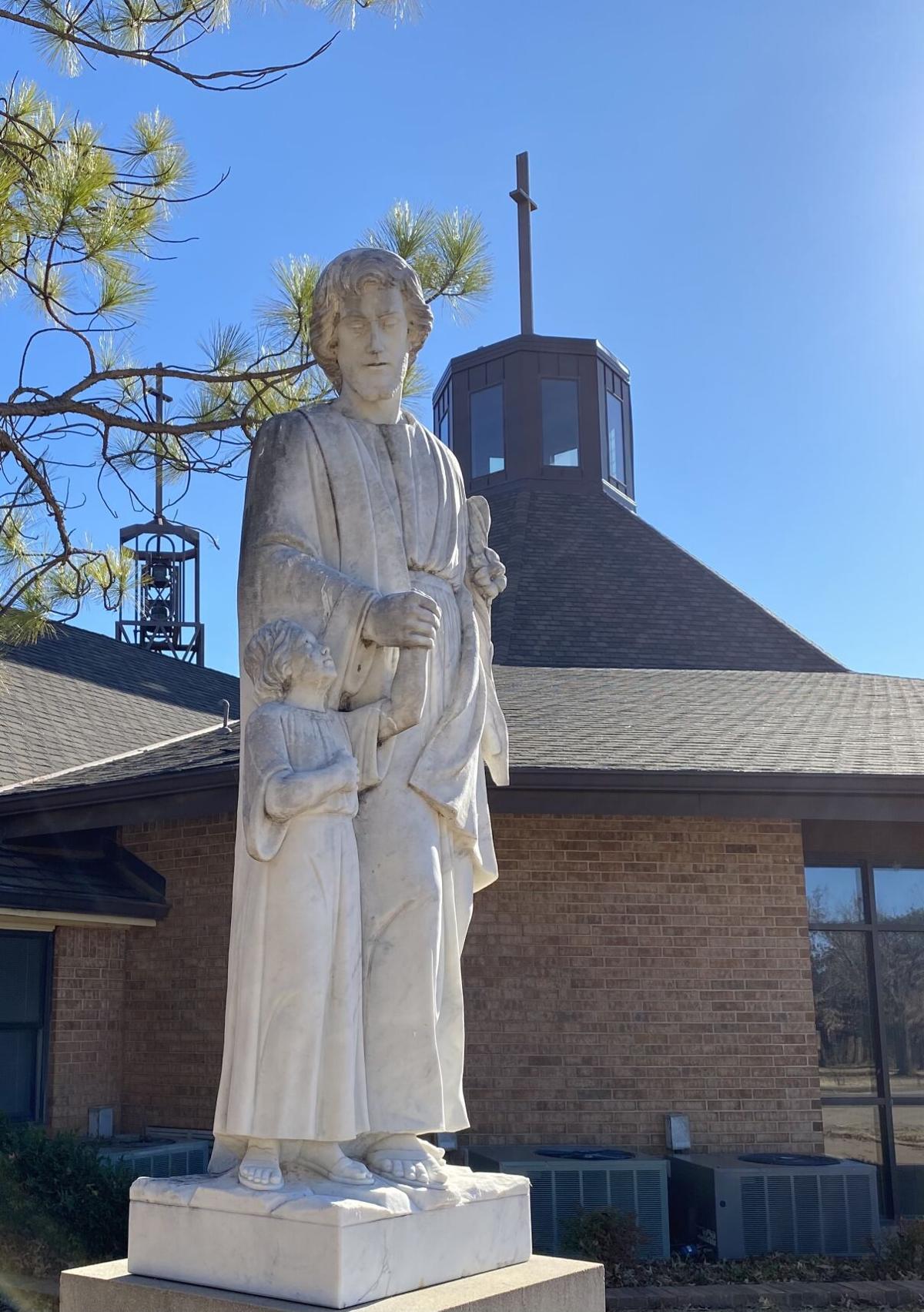 A statue of St. Joseph and the child Jesus stands before St. Iakovos New Studion monastery, near Piedmont. The statue is a remnant of the monastery’s original occupants, Discalced Carmelite nuns, who had been there, until recently, since 1985. (James Neal / Enid News & Eagle)

Fr. Athanasios administers incense before an icon of the Theotokos — Orthodox term for Mother of God, or Virgin Mary — in the sanctuary of St. Iakovos New Studion monastery, near Piedmont. (James Neal / Enid News & Eagle)

Sophia Samuel kisses the hand of Bishop Saba, presiding bishop of the Georgian Orthodox Diocese in North America, during the consecration of St. Iakovos New Studion monastery, Nov. 26 2020. It is an Orthodox Christian tradition to kiss the hand of a priest or bishop used to deliver the Eucharist, or Communion, to the faithful. (Photo provided)

A statue of St. Joseph and the child Jesus stands before St. Iakovos New Studion monastery, near Piedmont. The statue is a remnant of the monastery’s original occupants, Discalced Carmelite nuns, who had been there, until recently, since 1985. (James Neal / Enid News & Eagle)

PIEDMONT, Okla. — Prayers of the faithful, the words of Scripture and the fragrance of incense once again fill the sanctuary at the former St. Joseph monastery west of Edmond, now reopened as an Eastern Orthodox monastery.

The former Roman Catholic monastery, which was built for the Discalced Carmelite nuns in 1985, had been closed and listed for sale, and was purchased earlier this year by monks under the Georgian Orthodox Patriarchate of North America. It reopened on Thanksgiving Day as St. Iakovos “New Studion,” with Bishop Saba celebrating the Divine Liturgy and enthroning Archimandrite Athanasios as the monastery’s first abbot.

The News & Eagle visited the new monastery on Dec. 20, for the celebration of the Divine Liturgy — what Catholics and Anglicans better know as Mass — and a meal and tour of the monastery.

About 30 worshipers came to the monastery for the service, traveling from as far away as Tulsa to worship with the monks of St. Iakovos. Catholics and Anglicans may recognize the general flow of the service, but it was otherwise unmistakably Orthodox, with the emphasis on icons, chanted liturgy — assisted by several Orthodox nuns who came to help establish the new monastery — and frequent administration of incense.

Gail Sheppard traveled from Tulsa with her husband, George Michalopulos, to attend the service.

Like most of the attendees that day, Sheppard is a convert to Orthodoxy. Raised in The Episcopal Church, she left the liturgical tradition in the 1970s for an evangelical church. But, she always felt something was missing in evangelical worship.

She found that missing piece about 15 years ago when she learned of the Orthodox Church from a high school friend who had converted.

Sheppard said she immediately felt at home in the history, tradition and continuity of Orthodoxy.

“It was just the right fit for me,” Sheppard said. “The depth of the church — when you go back and have 2,000 years of continuity of church teaching, there’s just a richness there I was looking for. It’s just a richer faith, and I feel more at home here.”

For those raised in Protestant traditions, Sheppard acknowledged the formality of Orthodoxy may feel foreign. But she said she learned to find peace and comfort in the rhythm and continuity of Orthodox liturgy.

“For some it may be intimidating, because it is more formal,” she said, “but for me, it’s more comfortable.”

Nick Probst and Zac Hanson both also drove in from Tulsa with their families for the service. Like Sheppard, both men grew up Protestant before finding their home in Orthodoxy.

Hanson said he found a new connection in his faith through Orthodox traditions and liturgy.

“There’s a history and a richness to it that’s very compelling,” Hanson said, “and you kind of feel like you wish you’d found it earlier.”

Probst said finding Orthodoxy was like finding the source of everything he’d read and been taught as a Protestant child.

“As a Protestant, and then becoming Orthodox, you’re suddenly introduced to 1,500 years of church history that had always been excluded when I was a Protestant,” Probst said. “The traditions of the Church have a clear history of being passed down from the Apostles — passed down hand-to-hand. It’s by the grace of God this tradition has been handed down through the generations.”

Fr. Athanasios, abbot at St. Iakovos — a transliteration of the Greek for St. James — said bringing that tradition and history to Oklahoma in the form of a monastery has been a process long in the making.

Athanasios’ story likewise is a story of a long road that led to rural Oklahoma. The Greek-American was born in the United States, but raised in Jerusalem and Athens, Greece.

The son of an Orthodox iconographer, Athanasios’ upbringing was steeped in the Orthodox faith. It did not take Athanasios long to decide the path for his life.

“When I was 5 years old, I first decided to be a monk, and told my Spiritual Father, Elder Dionysios,” Athanasios said.

He and his four brothers had “the usual upbringing and all the usual activities,” he said, but he was not the last in his family to choose the monastic life. In all, four of the five brothers have chosen to become monks — the fifth is a tennis player.

Athanasios’ path to Oklahoma was being paved long before he was old enough to play a hand in it. In 1982, Archbishop Iakovos, archbishop of the Greek Orthodox Church in North America, invited Elder Dionysios to come from Mt. Athos, Greece, to hear confession from the theological students at Holy Cross Greek Orthodox School of Theology, near Boston, Mass. During that visit, Iakovos asked Elder Dionysios to found a new Orthodox monastery in America, offering land and funds.

That plan took time to incubate, and had to be carried to Greece and back to America by a then-young Orthodox nun, now Abbess Aemiliane, originally from a Kansas farm.

During that 1982 visit to Massachusetts, Aemiliane met Elder Dionysios, who would become her Spiritual Father, and who also was Spiritual Father to Athanasios’ family. Aemiliane followed Dionysios to Greece, where she served for more than 30 years.

Abbess Aemiliane returned to the United States in 2012, called to start a sisterhood and monastery in the North American Diocese of the Georgian Apostolic Orthodox Church, in Union Bridge, Md. Eventually, it was her spiritual and family ties in Kansas and Oklahoma that would help Aemiliane bring Athanasios and his brother monks to Piedmont.

Athanasios said establishment of the monastery has been an answered prayer for the growing presence of Orthodoxy in Oklahoma, which includes several Orthodox parishes in Oklahoma City and Tulsa, and St. Nino Equal-to-the-Apostles, in Stillwater and Enid.

“Everyone has been wanting a monastery here for decades,” Athanasios said, “and we are blessed to make it come true.”

Athanasios came to Oklahoma in 2018 to help bring that dream to fruition. He and another Orthodox priest, Fr. Centurion, started services in a home recently vacated by an Orthodox family in Tulsa. Athanasios said it did not take long to outgrow the space.

“We knew we needed to move to a larger, more suitable location,” Athanasios said. “We weren’t really looking for something this big, but God led us to this place.”

The former Carmelite monastery was a big step up from offering liturgy in a living room. The facility sits on 62 acres, including the 45,000 square-foot monastery, which encloses a sanctuary, living, dining and meeting spaces. And it came with a daunting price tag, listed at $4.9 million.

Initially, Athanasios said the monastery seemed out of the reach of the small group of Orthodox monks.

“It was really impossible to get this place,” he said. “But, God has opened every door, and is still opening doors. He put all the right people in the right places, at the right times, to make this happen.”

When the Carmelite nuns learned their prospective buyer wanted to continue using the consecrated space as a holy site, Athanasios said they “radically reduced the price,” placing it within reach.

“Their hearts opened up a lot when they found out it would continue as a monastery,” Athanasios said.

He said he and his brother monks — one of whom is his birth brother, Fr. Tarsizios — are honored to continue the work God started at the site by the Carmelite sisters.

“We have a relationship with them that is now brotherly-sisterly,” Athanasios said. “We understand how sacred this place was to them, and you can see how much effort and love they put into this place. Everything is in great condition, and everything is thought out so well. It’s a huge blessing for us to continue their work here.”

Some may be surprised to find an Orthodox monastery in rural Oklahoma. But, Athanasios said the monastery is a place of spiritual refuge for all people.

“People wonder, ‘Why a Georgian monastery in Oklahoma,’ but as our bishop said, this is not just for Georgian people, but for all Orthodox people,” Athanasios said, “and for all people to come and see and learn.”

Currently there are six monks and a novice at St. Iakovos. Athanasios said the door is always open to those who need a place of spiritual sanctuary, and for those who may be called to the monastic life.

“Anybody can come and spend time here,” he said, “and think about it.”