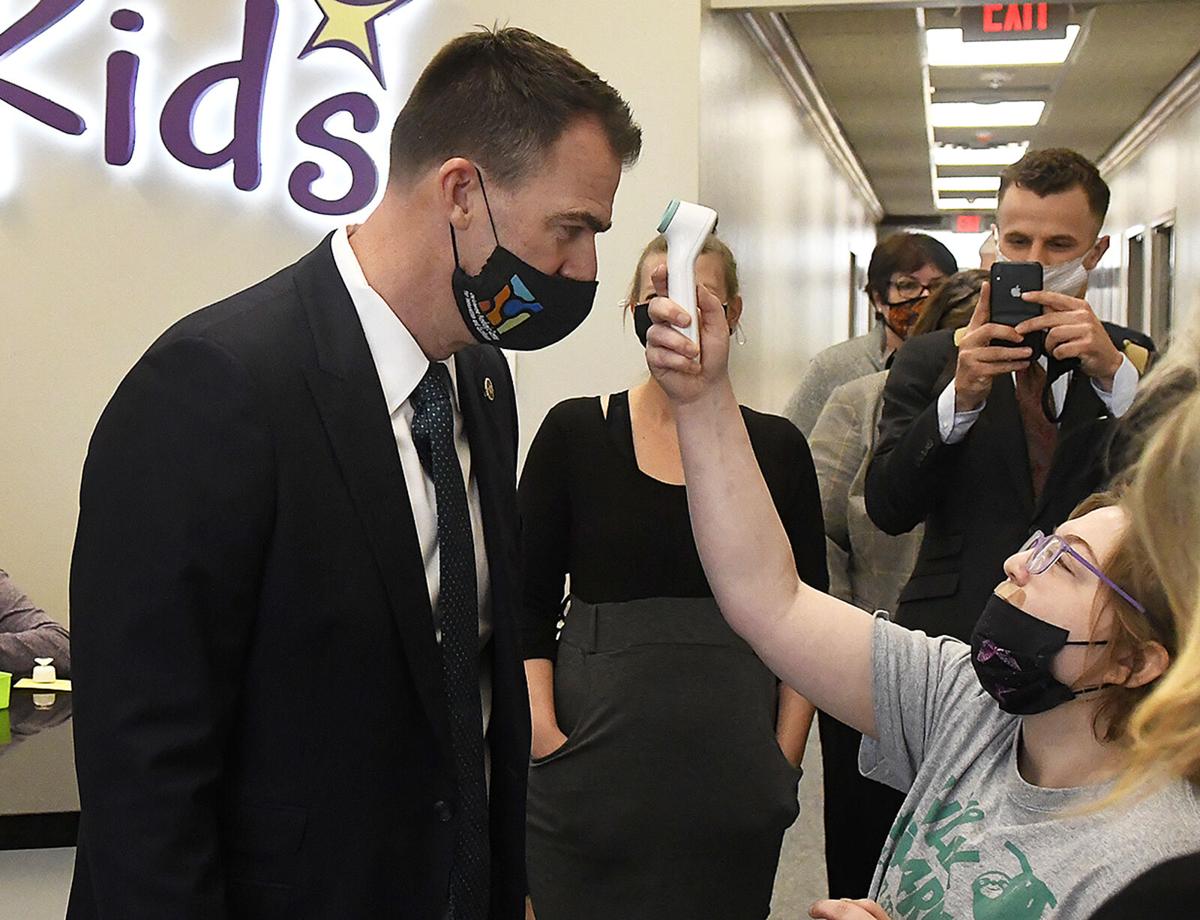 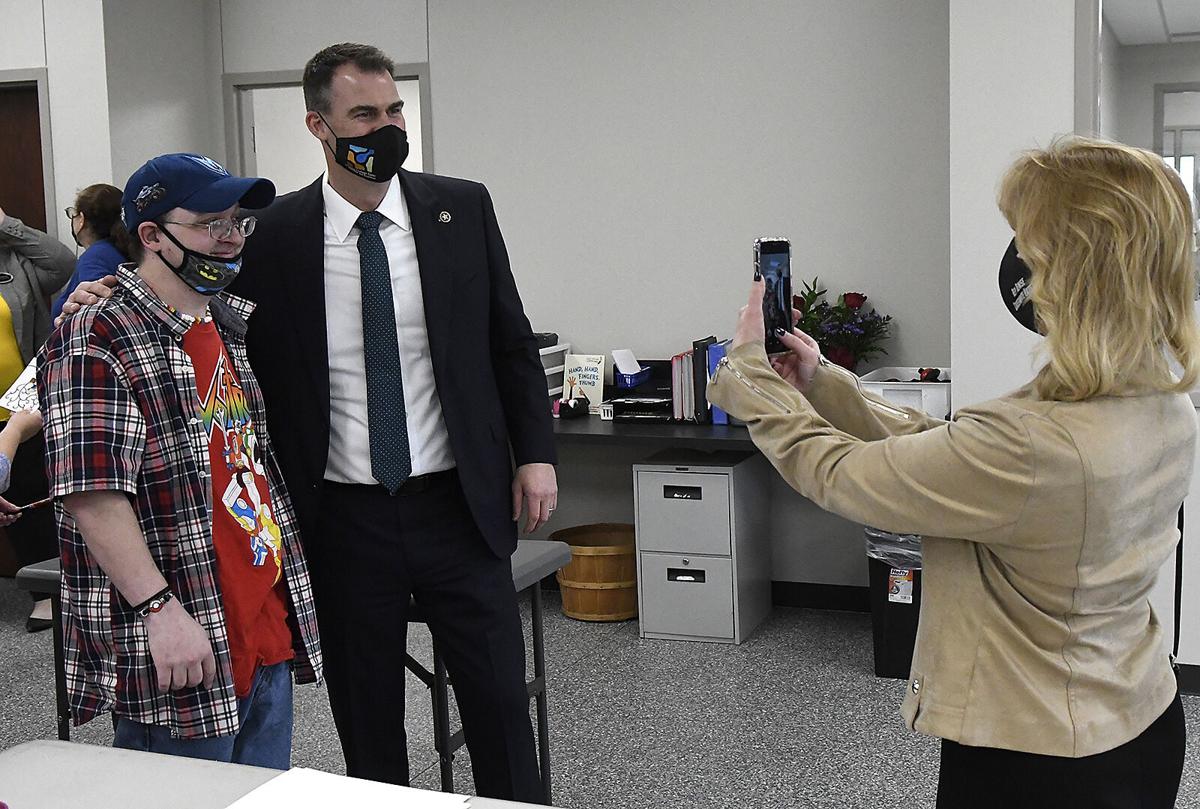 This story has been updated to include OSDH's weekly epidemiology and county Risk Level System reports.

Oklahoma Gov. Kevin Stitt made a quick trip to Enid on Friday to share what he said was “really some positive news right now.”

“We feel like we’re getting to the end of COVID,” he said to about 25 city and business leaders at Autry Technology Center.

Stitt made the trip to give an update about several other issues and his goals for the legislative session.

“On Fridays, I love getting out of the Capitol and out in the communities,” Stitt said. “I love getting out with the people and real issues and understanding what’s going on and what’s on your hearts. It helps me go back and work with the House and the Senate.”

The governor has issued an executive order lifting the remaining statewide restrictions on COVID; however, he said he continues to encourage Oklahomans to be cautious and vigilant about the virus.

“I’m trying to signal we need to get back to normal,” he said. “The goal was never to have zero cases. I just don’t think that’s practical. Normal in Oklahoma is freedom and freedom to take care of your families and safety of your families, but it’s also the freedom to go to work, educate our kids, keep our kids in school.”

Cumulative COVID-positive hospitalizations on Friday in Oklahoma stood at 24,595, with 253 currently hospitalized and 71 in the ICU, according to Oklahoma State Department of Health’s Executive Report.

The governor said the state has administered a total 1.3 million vaccinations, saying Oklahoma is No. 6 in states on vaccination efforts. He said 170,000 more vaccines will be coming to the state next week.

As of March 10, 24% of all Oklahomans 16 and older and 58% of those 65 and older have received the first dose of the vaccine, according to the report. In Garfield County, those respective percentages are 22.9% and 60.4%.

With the state being now in Phase 3, it will open up vaccines for another 2 million Oklahomans, Stitt said.

“It feels like we’re getting close to herd immunity,” he said. “When you look at 450,000 Oklahomans recovered now from COVID we’re testing antibodies all over the state, and we’re up to 40-45% of folks who never even knew they had it, but they have the antibodies. When you throw in the million folks who have had the vaccine and built up immunity, I think that’s one of the reasons our numbers are coming down so dramatically.”

According to OSDH’s weekly COVID-19 Risk Level System, 28 Oklahoma counties are in the moderate, or “orange,” risk level, 48 are in the low, or “yellow,” risk level and one, Harmon, is in the new normal, or “green,” risk level. This is about the same as last week.

Stitt said his administration has focused on three goals this session: making Oklahoma more business-friendly, delivering taxpayers more for their money and investing in fellow Oklahomans.

“It’s not the House agenda or Senate agenda, I’m coining it the people’s agenda,” he said.

His focus on making Oklahoma a Top 10 state is driving his goals to reduce regulations and red tape on business, while tax reform and education reform remain top issues.

Legislation on open school transfers has passed both the House and Senate. He said when schools were closed for COVID-related reasons, he was hearing from parents trying to both teach children and go back to work.

He said having open transfer allows parents to move their child to another public school and not be “trapped by the ZIP codes they’re in.”

“We think funding should follow the students and not the schools,” Stitt said, referring to legislation that would address what he has termed “ghost students,” the term used to describe students who have moved from one school district to another but still count toward their previous district’s enrollment figure when calculating state funding.

“We have the technology to determine what schools should have the money for the kids in their schools,” he said.

“McGirt to me is the most pressing issue that our state has ever faced,” Stitt said, referring to the U.S. Supreme Court landmark McGirt v. Oklahoma decision regarding the Major Crimes Act.

The decision ruled much of the eastern part of Oklahoma remains Native American land, since that land was never disestablished by Congress.

The decision throws into question the jurisdiction over prosecuting crimes that take place on tribal lands. There are different codes among the state, tribal and federal governments that have caused several problems, he said.

Stitt believes most of those issues regarding criminal procedures can be resolved, even though it will be difficult. However, he’s mostly concerned about the decision “leaking” into taxation and regulation.

He said there are 3,000 protests now at Oklahoma Tax Commission from Native Americans in Eastern Oklahoma who say they don’t have to pay income tax.

“I do not believe we can be a successful state if we have multiple sets of rules depending on your race or where you live in the state,” he said. “So, if we lose a dollar of taxes in Eastern Oklahoma, we have an equalization formula and if there is a dollar less in Eastern Oklahoma, that means that Enid Public Schools and Autry Tech get a dollar less on this side of the state.”

In response to a question about getting adequate provider input regarding managed care, the governor said he still believes the managed care model for the expansion of Medicaid “will improve lives of Oklahomans.”

“Now is the time for reform,” he said. “There’s a million people in Oklahoma on Medicaid. I believe the state has the right to ask questions, demand outcomes and hold those providers accountable.”

Stitt said he believes technology-related problems have been fixed since the 1990s when Oklahoma providers had a bad experience with the then-new style of managed care.

He said 40 other states successfully have a managed care Medicaid system.

“We have reached out to providers all over the state,” he said. “I get why hospitals don’t want this change. But, ultimately, we have the right as a state government to determine how we’re going to administer an $8 billion program.”

The governor expressed visible frustration over the problems of Oklahomans not being able to get driver’s licenses and REAL IDs in a timely manner. He issued an executive order in February to try to relieve the problems, including bringing in CareerTech schools to administer CDL tests.

He said the Legislature is involved in getting the tag agents more involved, getting them the right technology, etc., and said there’s a lot of “finger-pointing.”

“Oklahomans are hurting and we better get this thing figured out,” he said.

He also said he believes only one driver’s license needs to be REAL ID-compliant.

Following his remarks at Autry Technology, the governor made a visit to the 4RKids facility.

ENID — Christy was born on April 8, 1930, and took her final breath on April 14, 2021. A private family celebration will be held in May in Montana. Remembrances may be shared online at www.stittsworthfuneralservices.com.