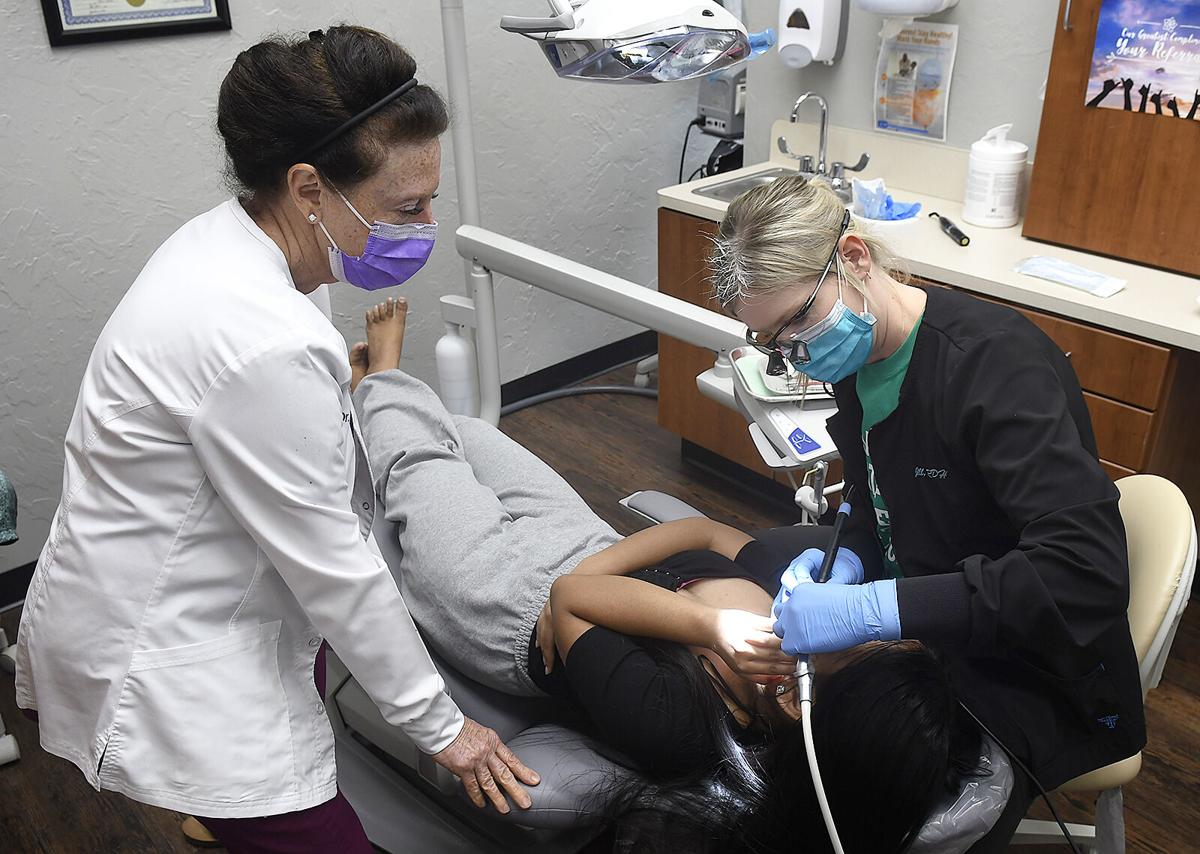 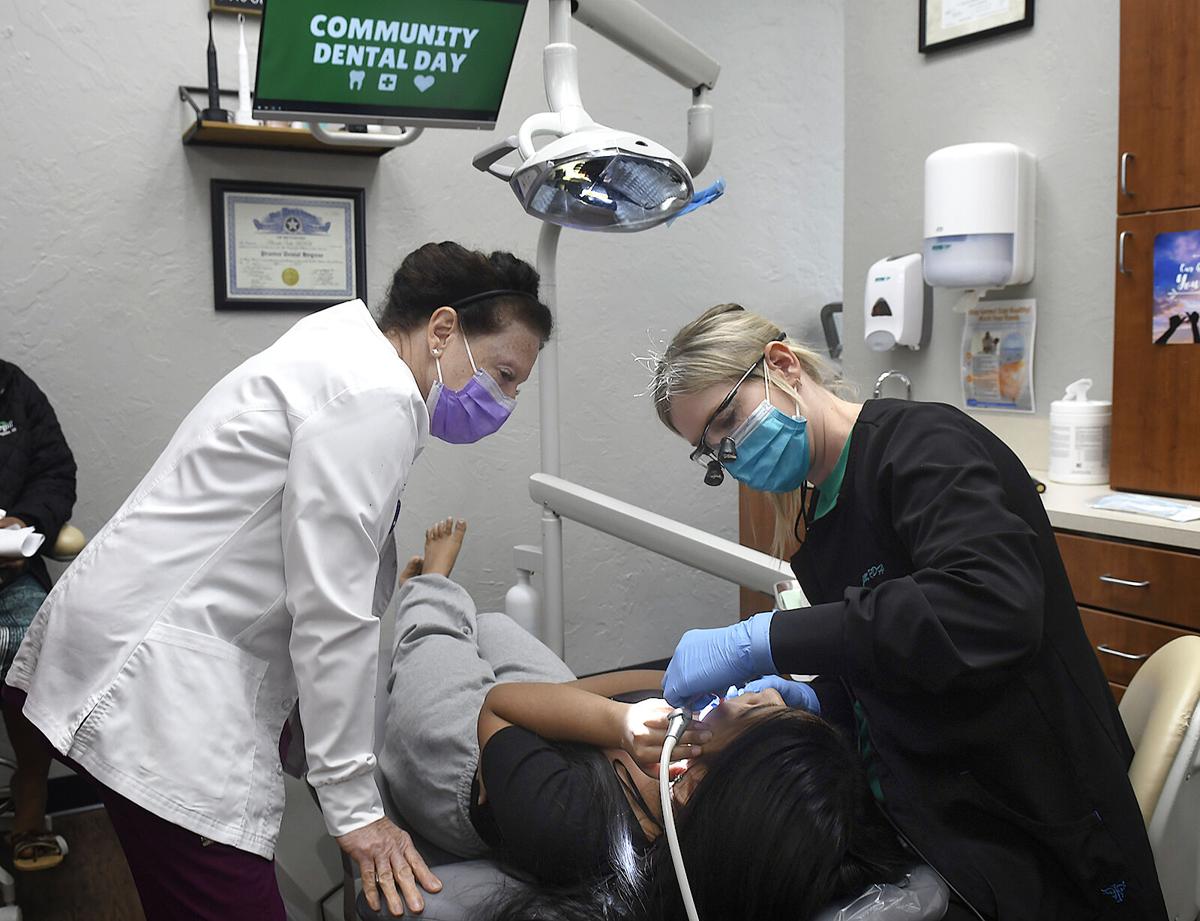 ENID, Okla. — A less hectic round two of the new community clinic offering free dental care saw nearly half as many people take advantage of the medical services Friday.

Sixty-five patients young and old were seen and treated at Great Plains Family Dentistry, down from the 133 patients who attended the first free clinic held in May.

People sat outside in folded chairs, waiting for their numbers to be called, while local health organizations held a health resource fair in the parking lot outside the dentist’s office, at 4125 W. Garriott, until the clinic ended at 2 p.m.

Dr. Sydney Rogers and eight other dentists were on site to provide tooth extractions for adults and cleanings and sealants for children, no insurance required. Four dental hygienists and students from Autry Technology Center and the Enid area were also present to assist doctors with the procedures.

“We thought that there’s still a need for this type of care,” Rogers said.

Seven local dentists participated in the clinic this year, Rogers said, compared with three from Enid who came in May.

“I think it shows that the dental community is willing to rally together for a community event,” she said.

Rogers said she and other organizers hope to hold the clinic again around the samwe time next year, ideally to offset a clinic called the Oklahoma Mission of Mercy held each February in Oklahoma City.

The dentistry’s office manager, Amber Beguin, said the still-busy day was all about giving back to the community.

“So being able to do that, it warms my heart,” she said, “But then just to see (patients) get out of pain, that’s always exciting to see them get out of pain or just to receive any kind of treatment that’s needed.”

Rogers said she wasn’t aware of any patients returning Friday for follow-ups after the first clinic, but Beguin said children received follow-up plans for any treatment or possible insurance coverage.

Representatives from the Oklahoma Health Care Authority were also on hand Friday to enroll more for the Medicaid insurance program, which was recently expanded for adults earlier this summer.

Great Salt Plains Family Dentistry is one of the Enid area’s two dentist’s offices that see patients covered under the SoonerCare program, and Beguin said several patients had been enrolled after their appointments Friday to be seen later.

Jim Allen had brought a John Grisham book to read as he waited for an appointment, having been brought to the clinic when it opened at 8 a.m. with a dozen or so other men from Catalyst Behavioral Services, the men’s addiction and health treatment center in Enid.

Allen, a California native who returned to Oklahoma a year ago, said he was hoping to get all of his chipped upper teeth pulled before they got infected so he could eventually get dentures.

But once he sat in the recliner chair for Dr. Daniel Taw, a Yukon dentist, Allen learned that because he had already enrolled in SoonerCare a few days ago, he wouldn’t need to get the extraction and then have to wait for dentures later.

Patients should ideally get dentures as soon as possible so they fit better under less-deteriorated bone structure, Beguin said.

“As much as I want to help you out today, this is a much better way to get you treatment and get you the care you need,” Taw said.

Because Allen said he wasn’t in any immediate pain, Beguin instead scheduled him for an appointment Monday afternoon to clean his bottom teeth, extract any chipped upper teeth and immediately fit him for partial or full dentures for that same day.

“It’s just a better way of doing things,” Allen agreed. “So Monday, I’ll be back.”

Allen then took his book and a bag of Cheetos he could now still eat back to the parking lot, where he waited for his fellow Catalyst residents to finish their appointments.

“Sixty-three years of age, you know, I’ve known people who were 45 years old and had to have their teeth replaced, so I’m good. I got no complaints,” he said standing outside, before laughing, “And I’m getting it done here, in Enid, Oklahoma.”