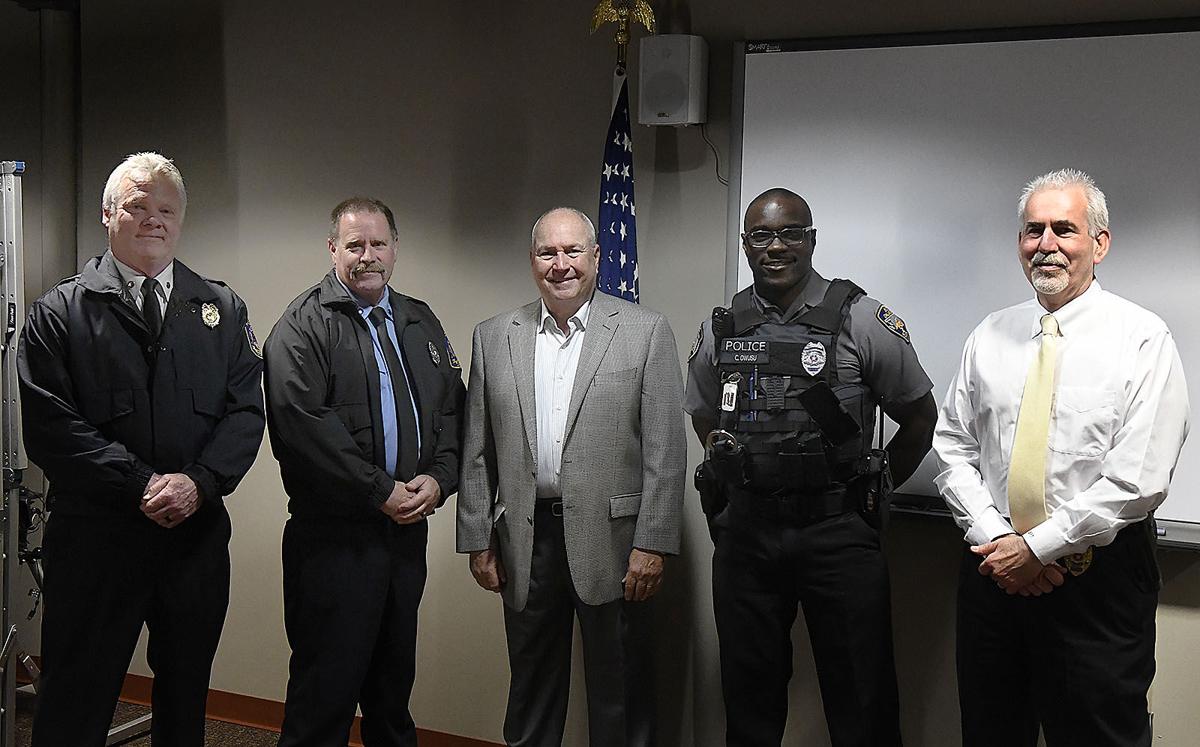 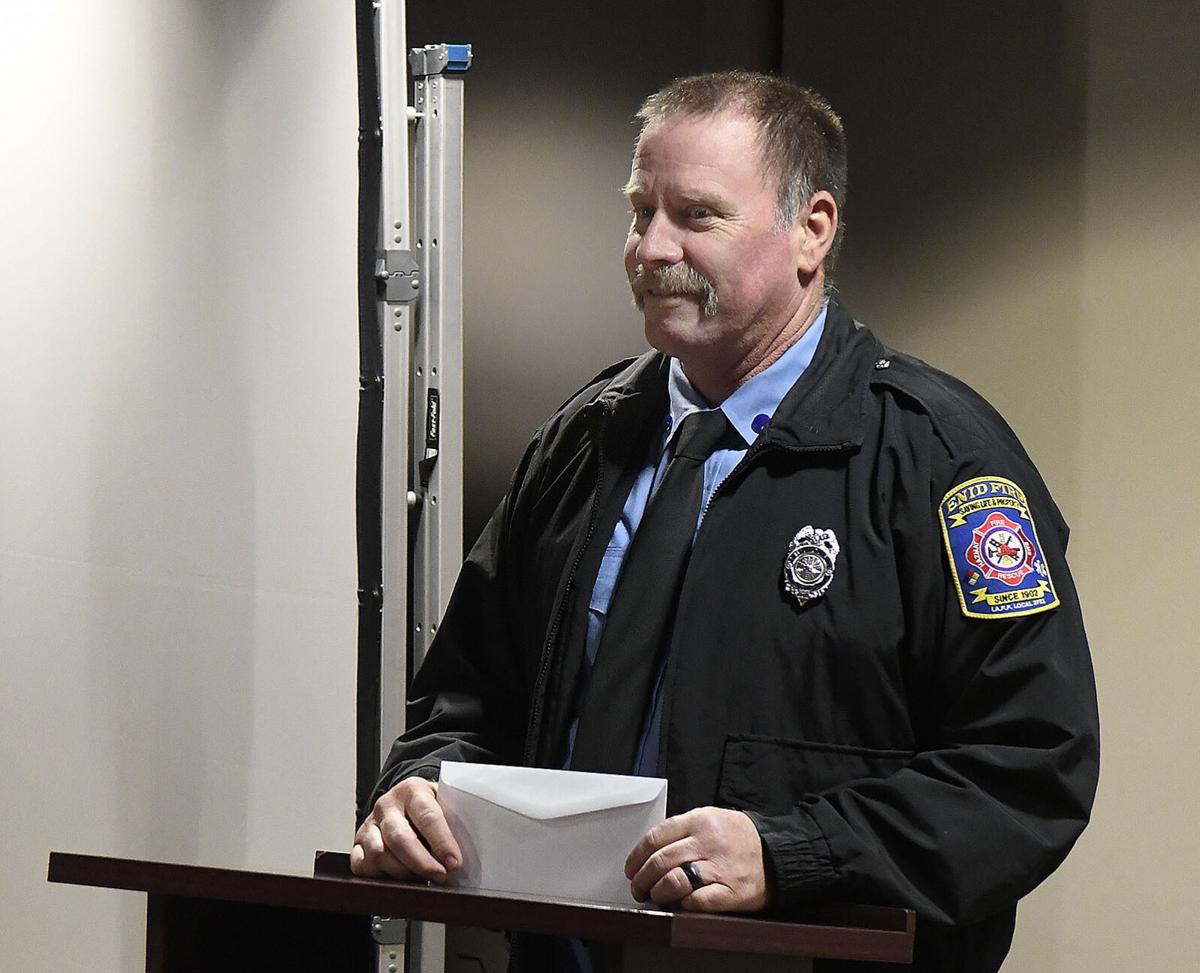 Enid firefighter Garry Watters says a few words after receiving an award from Dr. Richard DeVaughn for being named Firefighter of the Year Monday, March 22, 2021. 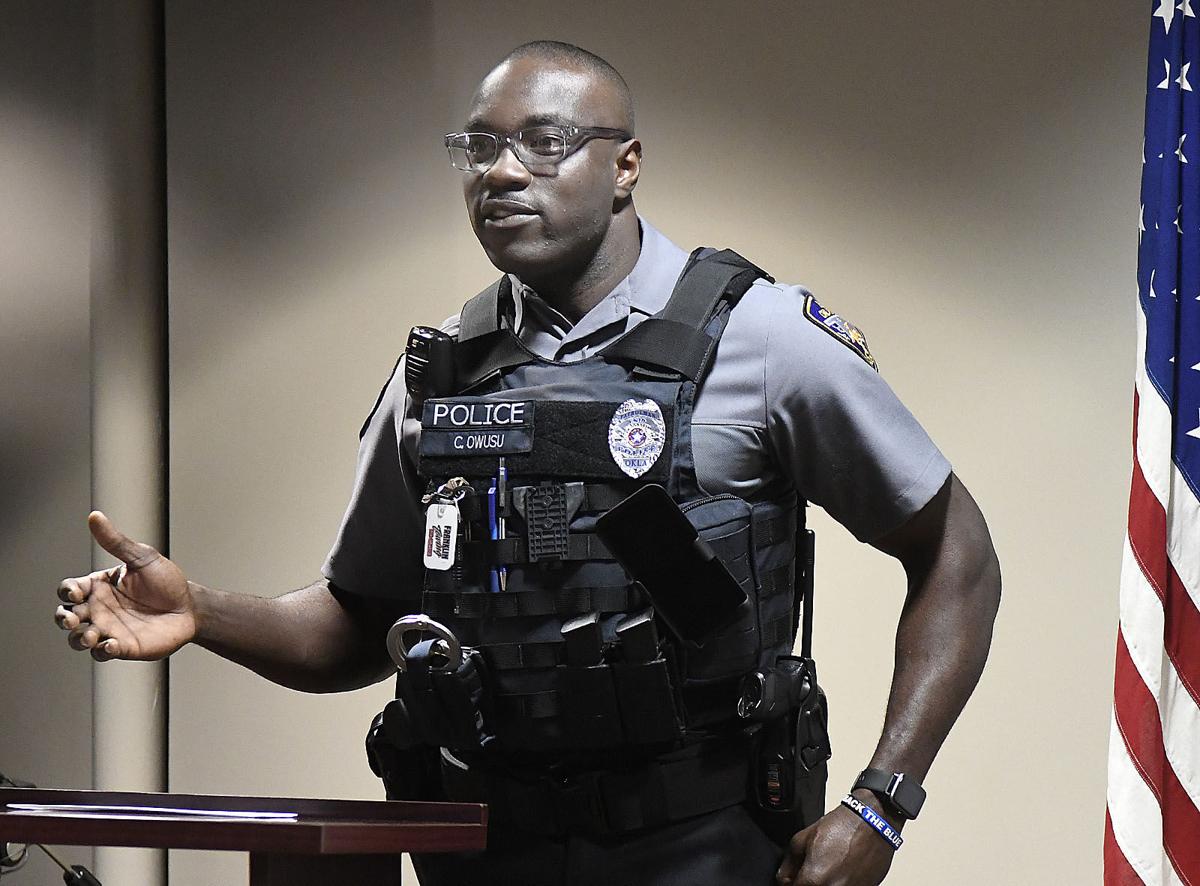 Enid firefighter Garry Watters says a few words after receiving an award from Dr. Richard DeVaughn for being named Firefighter of the Year Monday, March 22, 2021.

ENID, Okla. — An Enid Fire Department driver and an Enid Police Department officer were honored as Firefighter and Officer of the Year, respectively, in a ceremony on Monday afternoon at EPD.

EFD driver Garry Watters and EPD Officer Christian Owusu each received $500 awards, which came in honor of the late Stephen DeVaughn, who died in June 2015.

Richard DeVaughn, brother of Stephen DeVaughn, said his brother dedicated his life to law enforcement, both in the community and nationally. Stephen DeVaughn was an Eagle Scout, an agent for the U.S. Treasury Department Customs Division and served with the Secret Service on the Personnel Protection Service of President Gerald Ford and as the special agent in charge of the New Orleans, New York City and Criminal Divisions of Custom Enforcement.

After retiring as director of Criminal Investigation in Washington, D.C., Stephen Vaughn was torn between living in Lyon, France, and Enid, and he chose Enid, moving here in 2000.

“He couldn’t believe that he was doing what he wanted to do all this life and was getting paid for, so that in essence was my brother,” Richard Vaughn said of his brother’s life. “We wanted to carry on that tradition, doing a Police Officer of the Year and a Firefighter of the Year.”

Nominees are selected from each of EFD’s three shift groups and a fourth group of nine staff members, Fire Chief Joe Jackson said. The entire department then votes for the Firefighter of the Year.

Watters has been with EFD for 17 years minus four days when he resigned to take a position in Norman. He came back four days later because “it wasn’t Enid.”

Jackson said for all 17 years worth of evaluations, some traits continuously pop up.

“Over the years ... His attributes include an admirable work ethic. All of his actions are in support of the organization,” Jackson said. “He’s always respectful, shows honesty and integrity. Service-oriented. Enjoys serving the public — he does it with a smile on his face. It provides great examples for others on the department and our new firefighters and recruits. Just overall a team player and leader.”

Watters was in the landscaping and construction business before joining EFD at 37 years old, which is something he said he never saw coming.

Looking back now, he can’t ever picture doing anything else, wishing he had joined sooner than he did.

Watters thanked everyone at the ceremony, saying like Stephen Vaughn, he gets to do a job he loves.

“I wasn’t expecting (the award),” said Watters, who was honored by Enid Kiwanis Club in December. “It’s an awesome deal. I don’t feel like I deserve it — like I said, I love my job, and I get paid to do it ... There are so many other guys are more deserving than I am.”

EPD Chief Brian O’Rourke bestowed the award upon Owusu, saying that “he never has a bad day” and has a positive attitude toward the community.

“What a plus for us,” O’Rourke said of Owusu. “The story that I tell ... I’m sitting at home one night looking through Facebook, and there’s a video of (Owusu) playing the drums in a bar at 11 o’clock, and I look at it and go, ‘Oh, crap, he’s in uniform. What is going on here?’”

Owusu had responded to a noise complaint after the city mandated COVID-19 lockdown ended and bars opened back up. He got the call and said “very good music” was playing and didn’t think it was fair to shut them down after just opening back up, so he joined in and played quietly with the band.

O’Rourke said community engagement matters and that Owusu, who was honored by Enid Kiwanis Club in February, does a very good job at it.

Each quarter, EPD supervisors select an Officer of the Quarter, and of those four, the administration — the captains and O’Rourke — selects Police Office of the Year.

Of his character, Owusu said every day teaches him a new lesson on keeping a positive attitude, and he is proud to be just “one of Enid’s finest” police officers.

Owusu, who is from Ghana, West Africa, thanked the DeVaughn foundation and said like Stephen DeVaughn, he enjoys what he does. He also thanked his superiors, who “made a police officer” out of him, and his coworkers.

“With English not being my first language, I have to shut up and listen, and sometimes, listen twice before I go, ‘Oh, that’s what you meant. I get it now,’” Owusu said. “It’s been rocky, but I’m still learning. I’m ready to learn and always willing to take advice from veterans.”

The DeVaughn family began honoring the Officer and Firefighter of the Year in 2016 to honor Stephen DeVaughn and set up the funds with Cherokee Strip Community Foundation, Richard Vaughn said.

“We think it’s important to honor the top officers and firefighters,” Richard DeVaughn said. “Trophies and plaques are nice ... but you can’t eat it and you can’t spend it on something, so that’s what we decided — that we’d give $500 to each one each year.”

Owusu said with the check, he plans on doing something to pay it forward.

“Thank you so much for this ... I need it, but somebody needs it more than I do, so it will get out there,” he said.