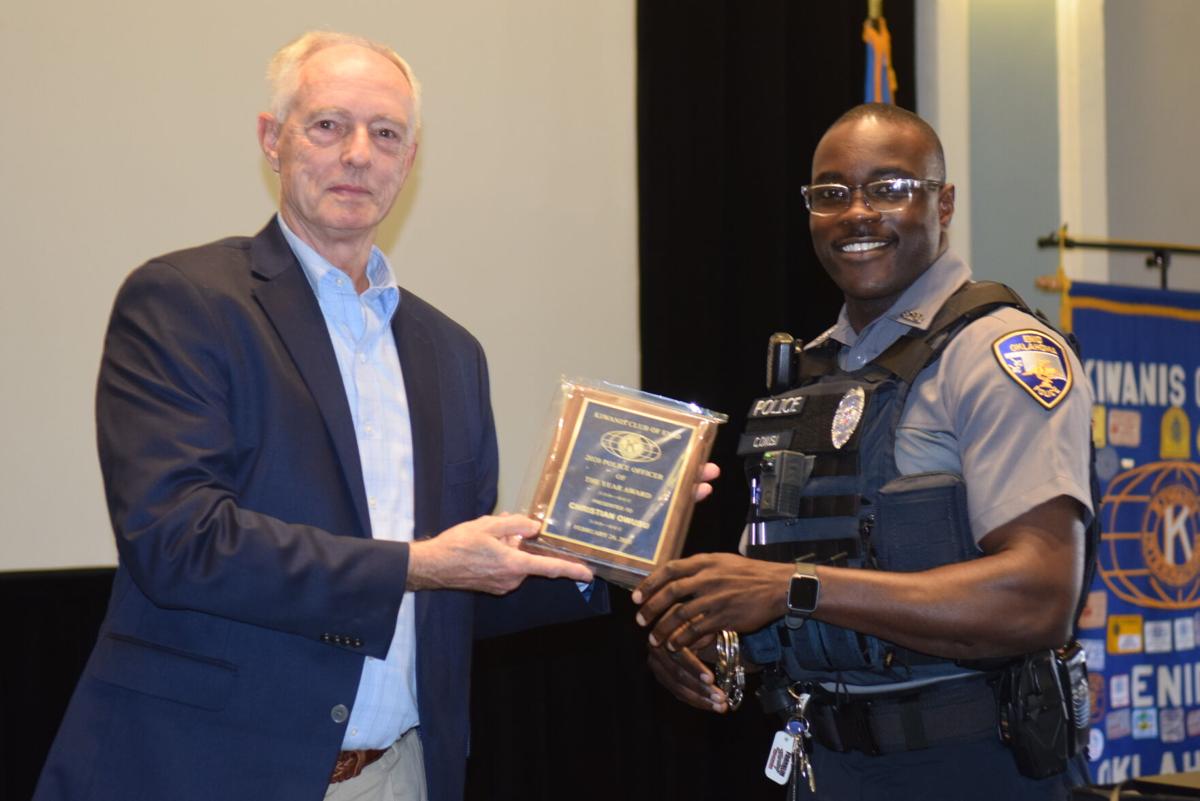 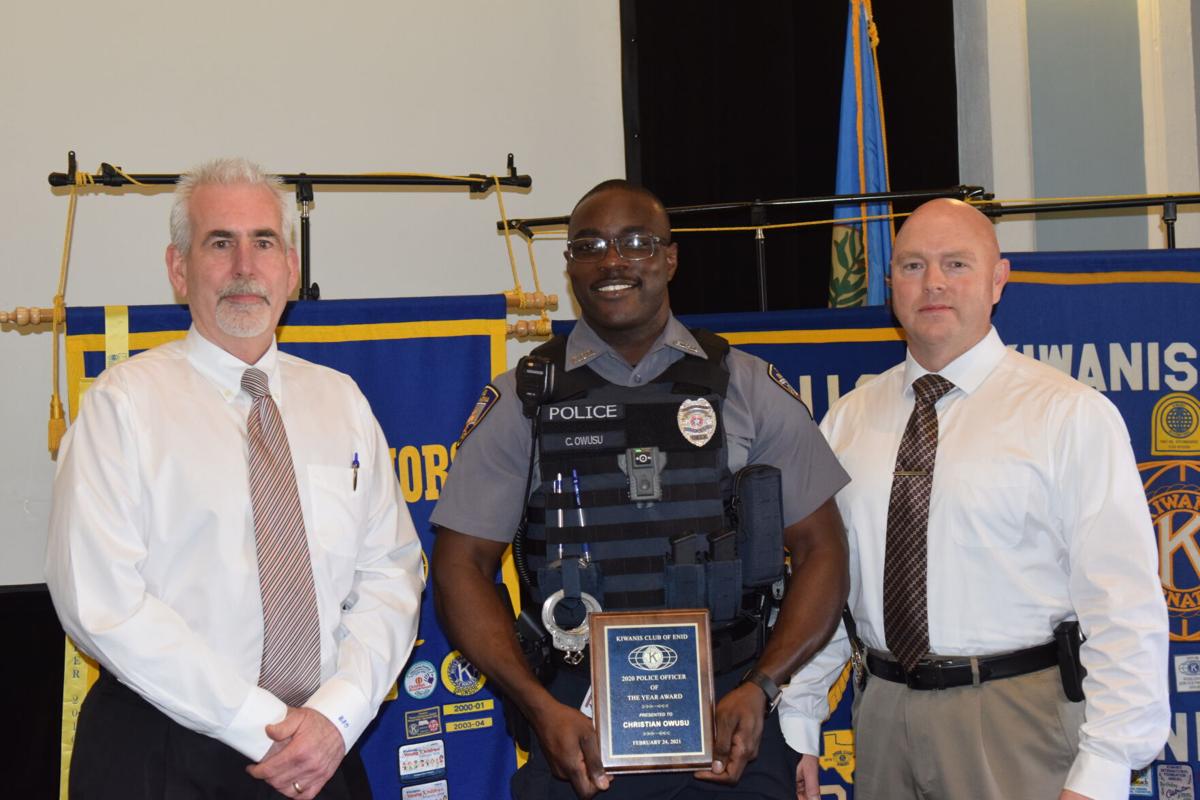 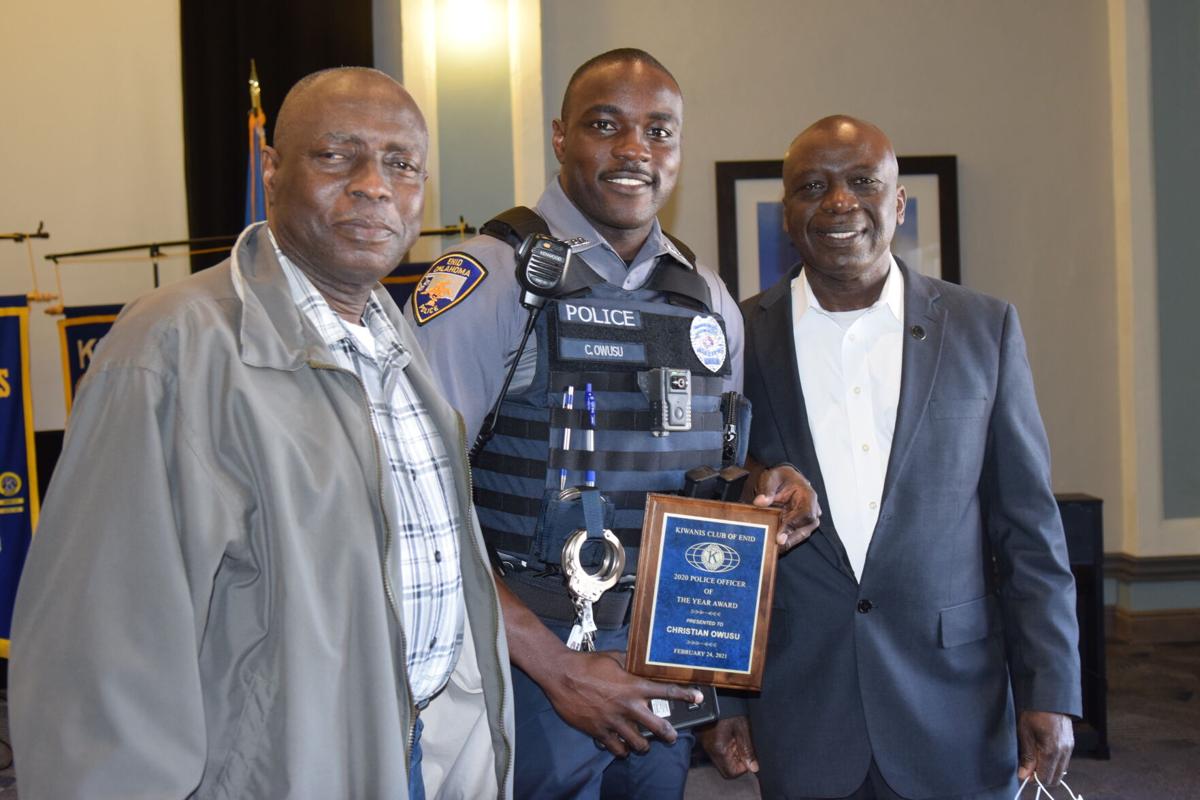 ENID, Okla. — For the 32nd year, Enid Kiwanis Club honored an Enid Police Department member as Officer of the Year on Wednesday.

Officer Christian Owusu, who is nearly five years into his “dream job,” said he is honored to have been selected out of the 82 officers — 100 in full staff — in EPD.

“Being one out of the 100, it’s a great honor to be to be named Officer of the Year,” Owusu said.

Each quarter, EPD supervisors will nominate an officer who has done an “outstanding job” based on officer’s work habits, work history and activities. The command staff decide who gets Officer of the Quarter.

Officer of the Year is selected from among those four officers, and Chief Brian O’Rourke said Owusu’s work ethic, attitude toward others and engagement with the community are some of the things that helped Owusu earn Officer of the Year.

“He doesn’t get upset — he could be standing in a rainstorm and smile,” O’Rourke said.

Owusu said this positive attitude comes naturally to him, and his grandfather used to tell him that an attitude was like a vehicle with a flat tire: “You cant go anywhere unless it’s changed.”

Owusu, who is originally from Ghana, West Africa, moved to the Oklahoma City area when he was 15 and worked for Oklahoma County Sheriff’s Office for about four years until he decided he wanted “something bigger.”

He was looking for police officer jobs and came across an EPD position, and he recalled playing football with Western Heights High School against Enid High School and thought, “Let’s give it a try,” joining EPD in 2016.

“Going through (training), I had never held a firearm — none of that,” Owusu said. “The training division that we have in the police department really helped me out in training and a lot of things — how to walk, how to eat, how to sit and how to talk to people ... That made a police officer out of me ...

“With training, with humility and humbleness, I was able to qualify and become a police officer.”

“I was sitting at home one night looking through Facebook, and a picture pops up and it’s Christian playing the drums at a bar in uniform, and I’m like, ‘What is going on here?’” O’Rourke said. “He went there on a loud noise complaint and joined the band ... It was hilarious.”

Owusu said that had happened right after the lockdown ended and bars opened back up. He got the call and said “very good music” was playing and didn’t think it was fair to shut them down after just opening back up.

“I joined them to play quietly,” he said with a smile.

Two of Owusu’s uncles, Amby Owusu Opare and Stephen Wiafe, joined him at the meeting to watch the Kiwanis Club honor him with the plaque, which he said he is sending straight to his hometown in Africa to show the world that the Kiwanis Club exists.

“It’s such a great honor,” he said. “I had no idea who (the Enid Kiwanis Club) was, but coming to find out who they are now, it seems like a big, charitable entity ... I think the world needs to know about it and hear about it and get told that there’s actually a club out there ... that actually cares about law enforcement officers.”

Being named Officer of the Year is just one thing Owusu wants to accomplish in his law enforcement career.

He currently works in Patrol Division and has worked in the department’s Street Crimes Unit, but he said he wants to go through every department and division EPD has, including detectives and training.

He also wants to be promoted to sergeant, lieutenant and captain.

No matter where his career takes him or what call he responds to, Owusu hopes he continues to positively impact those he comes in contact with, whether through his attitude toward others or his “unique hello.”