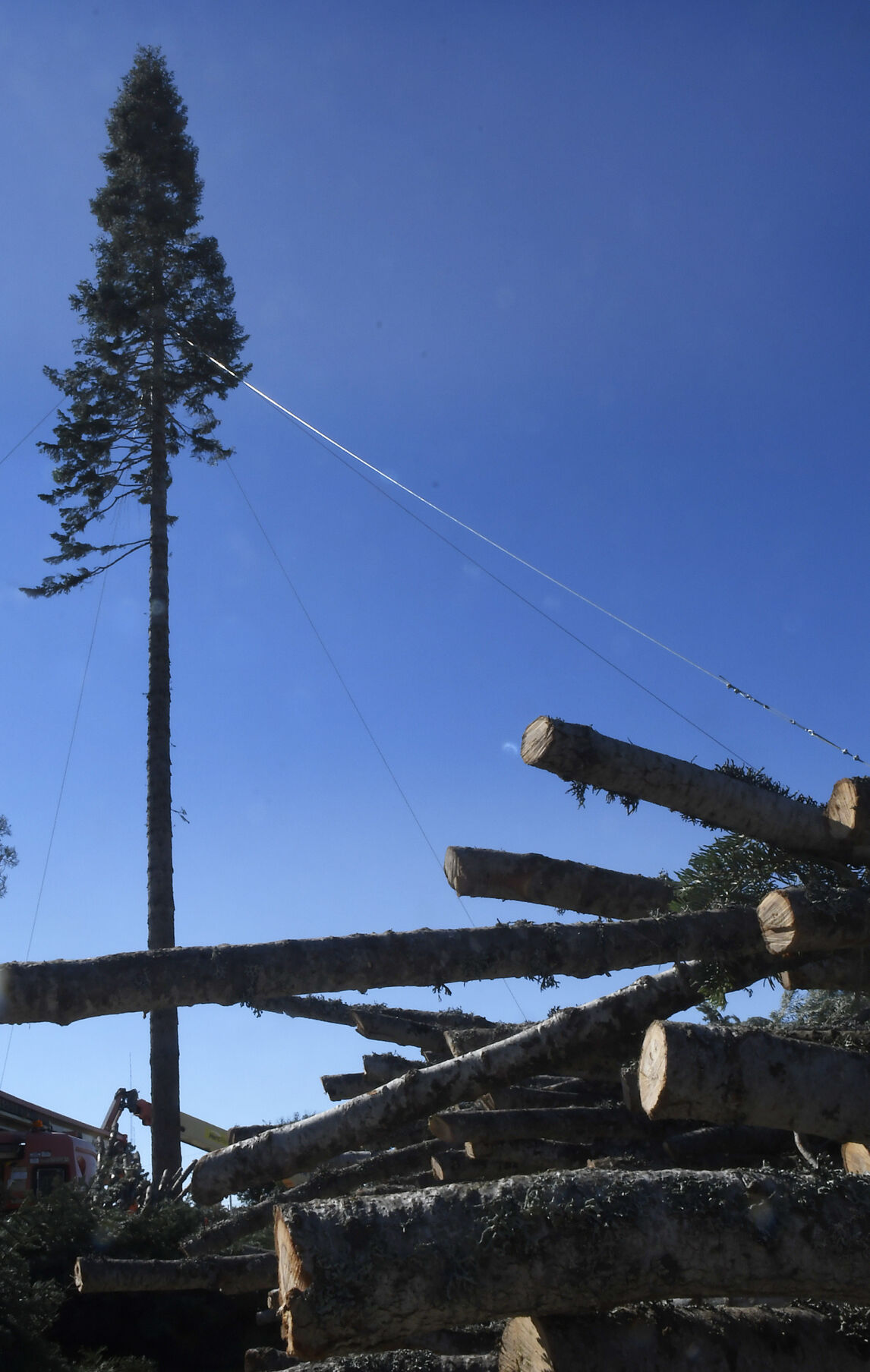 Some of an estimated 1,300 limbs that will be used to fill out the 140-foot Christ tree lie in downtown Enid. High wind gusts initially prevented work of filling out the lower part of the tree after it was raised on Thursday, Oct. 14. (Billy Hefton / Enid News & Eagle) 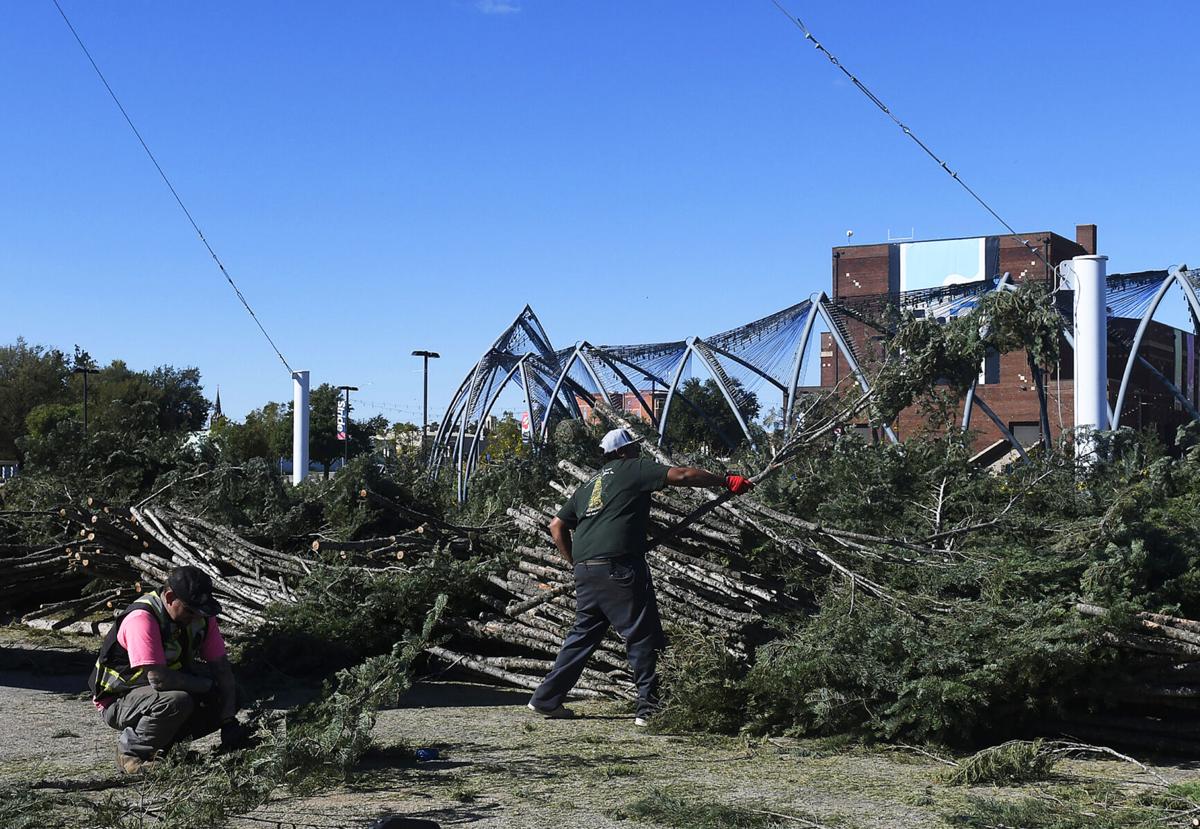 James Barkley (left) and Marcus Perry prep and stack limbs that will be part of the Christ tree Friday, October 16, 2021. An estimated 1,300 limbs will be used to fill out the 140 foot tree. High wind gust prevented the work of filling out the tree from starting Friday. 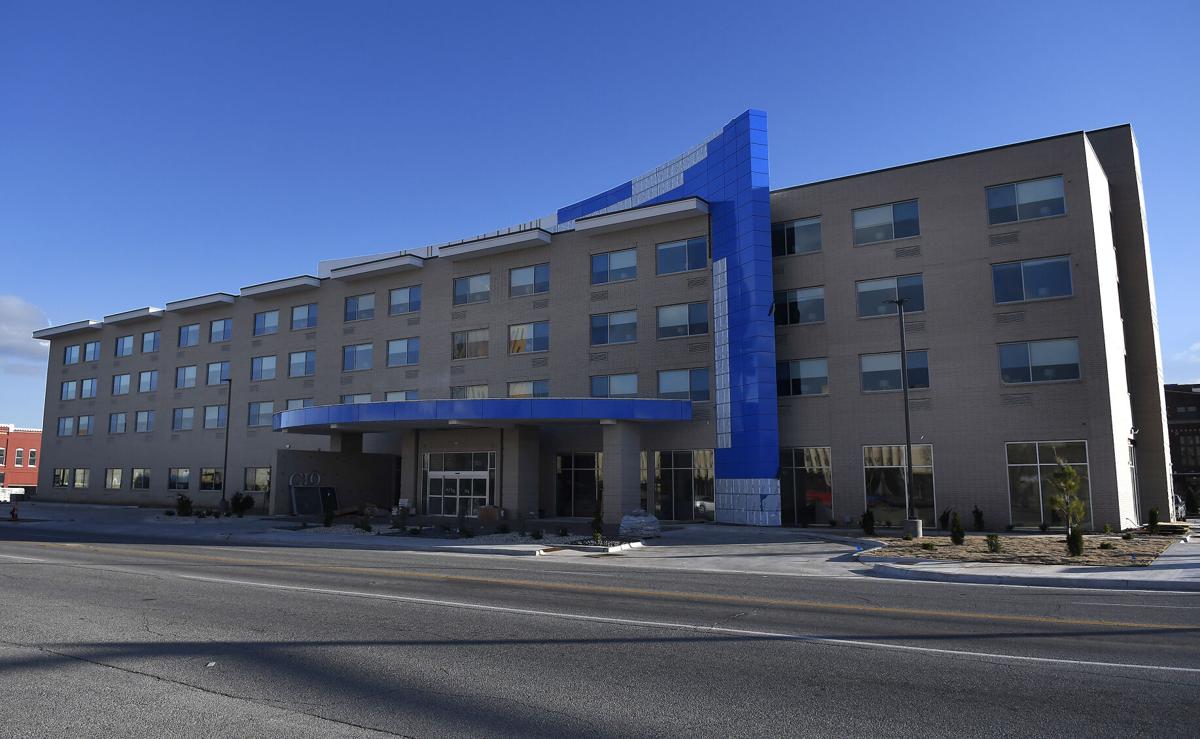 The downtown Enid Best Western Glo hotel is near completion in this Dec. 23, 2020, file photo. 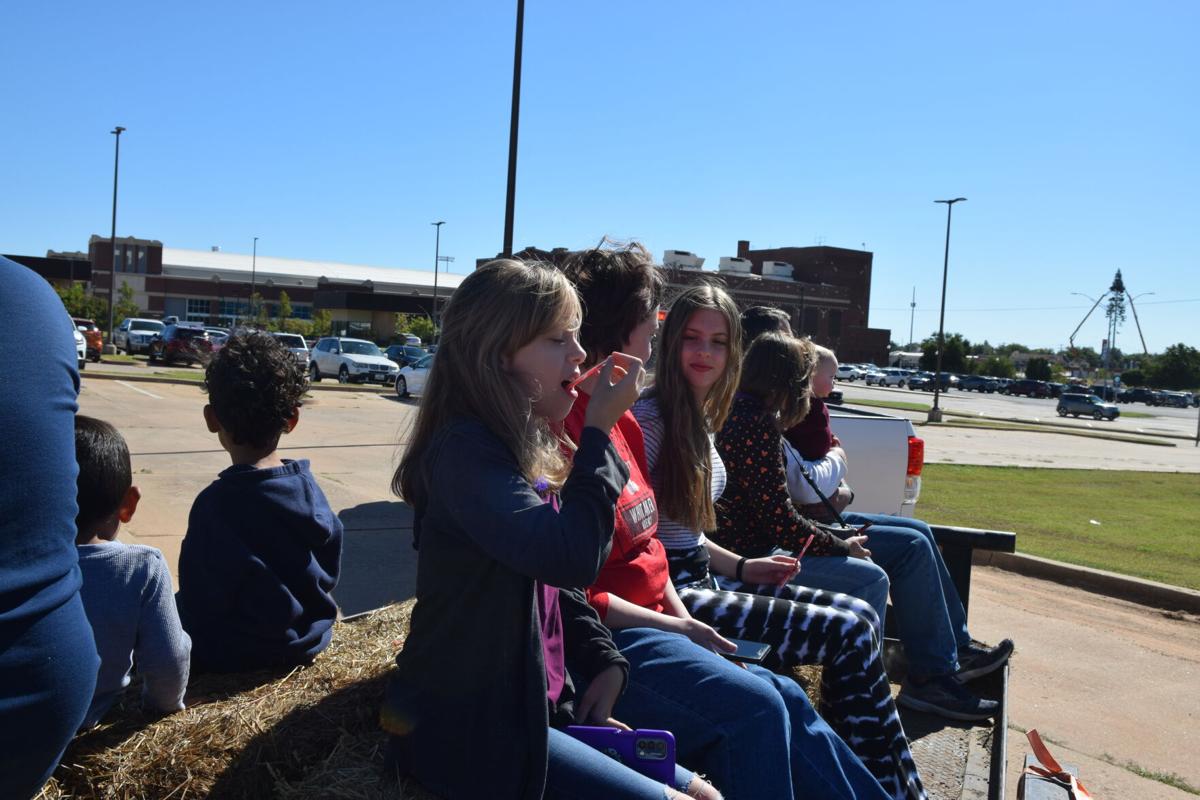 Callie Merry eats a pixie stick as she and her family sit on a tractor ride being pulled by Enid Brewing Company co-owner Justin Blasier through the Stride Bank Center parking lot on Saturday, Oct. 16, 2021. The 140-foot Christ Tree stands in the distance.

James Barkley (left) and Marcus Perry prep and stack limbs that will be part of the Christ tree Friday, October 16, 2021. An estimated 1,300 limbs will be used to fill out the 140 foot tree. High wind gust prevented the work of filling out the tree from starting Friday.

Callie Merry eats a pixie stick as she and her family sit on a tractor ride being pulled by Enid Brewing Company co-owner Justin Blasier through the Stride Bank Center parking lot on Saturday, Oct. 16, 2021. The 140-foot Christ Tree stands in the distance.

ENID, Okla. — With Enid’s Christmastime event series set to begin next month just down the block, downtown business owners and city officials say they hope the expected turnout will translate into bigger business for the area.

Enid Brewing Company & Eatery is moving its Weekends on Maine vendor market to the ice rink area by the 140-foot Christ Tree on the third Saturday of December, in conjunction with The One events kicking off Nov. 26.

Co-owner Justin Blasier said the event, where local crafts and downtown businesses display their wares each month on Maine, will be renamed Holidays on Maine through the rest of the year.

He said the brewing company is also planning a gingerbread porter for Christmastime, along with offering pumpkin-flavored brews coming for the fall.

The restaurant, at 126 S. Independence, expects its permit any day now for the inside kitchen that’s long been under construction, as well as already having gotten the permit to connect the company’s two buildings for a larger dining area.

“We really want to be able to get people aware of us,” he said during Saturday’s Holidays on Maine. “Hopefully the tree itself will bring a lot of people from out of town. I know the ice rink did.”

Nicole Winfield, project manager for The One, said the event team expects 100,000 people — twice as much as Enid’s current population size — to make their way to Park Avenue between Grand and Independence to see the Christ Tree and enjoy all of the free events being held for 42 days around the 140-foot spectacle, which arrived Wednesday.

Beginning on Enid Lights Up the Plains on Nov. 26 through Jan. 6, 2022, Christmas events such as services, concerts and movie showings are planned for every weekend, as well as throughout the week after the team received so many event requests, Winfield said.

She said Main Street Enid is expecting twice as many people to attend ELUP downtown for the first night of The One event series — hypothetically doubling the highest past attendance of 8,000 to 10,000 people.

“And that’s just on that one night,” she said Friday. “I don’t doubt that we would be able to hit that 100,000. Our coverage is pretty big on our social media numbers,” referring to the Facebook page’s metrics by geographical area.

Kyle Williams, the main sponsor of the tree, wanted to make Enid a destination site with The One and its giant Christmas tree, Winfield said. Williams had other options in town to put the Christ Tree, but she said he wanted to do it in an area where the city would benefit from the expectedly massive number of visitors.

As the city’s densest and most focused center of retail businesses, downtown Enid would show people coming to see the tree that they have “everything they need,” Winfield said.

“This time of year is probably even a better time, because you’re looking for Christmas gifts and ideas,” she said. “This is a very inclusive event that we want everybody to attend everything. It’s not just for people who attend a certain church or organization.”

“We love the holiday season, and we just want as many people to experience downtown Enid as possible, with the ice rink and the tree,” Blasier said.

Monica Rorick, owner of the Pastry Nook, said she hopes — but with some skepticism — that the main draw of the giant Christmas tree will flow people up to her business on the 200 block of West Randolph downtown.

She said her bakery will likely have something set up at the Holidays on Ice skating rink that opens Nov. 20. Otherwise, she said, people visiting the tree might not know about her business located farther north, which holds holiday-related decorating and baking events throughout the year.

“(The One) is gonna pull people in, but it’s going to pull people to there. What’s going to pull them over to West Randolph four or five blocks away?” she asked. “That’s what we’re hoping, but I’ve been doing this for a long time. If there’s not something right there that’s gonna say ‘The Pastry Nook’ and where we are, that might be an issue.”

“We love the holiday season, and we just want was many people to experience downtown Enid as possible, with the ice rink and the tree."

More chances down the road

Rob Houston, director of the city’s tourism and visitors bureau, Visit Enid, said his office is also hoping the 100,000 people expected to come for The One’s events around the Christ Tree will transition to more hotel room nights in Enid.

Enid hotels had record-setting occupancy rates in June because of the Koch Fertilizer turnaround project, but rates have fallen in months since, said Houston, whose office receives monthly reports showing the overall occupancy rate for hotels in Enid.

Both Houston’s staff and the team organizing The One have been pushing for hopeful visitors to more specifically book stays at the recently opened Best Western Glō hotel, Houston said during an advisory board meeting for Visit Enid on Wednesday.

“Like telling visitors, ‘You can see the tree from there if you’re on the right side,’” he said.

Visit Enid is also pushing back the release of the office’s annual visitors’ guide to February in order to include photos instead of just renderings of the One event and the Christ Tree.

While recent monthly tax revenue totals from all of the city’s hotels had been returning to levels pre-pandemic, September’s collections were the lowest in the last four fiscal years, according to hotel tax comparisons received from the city’s finance office.

August’s hotel tax revenue, received Sept. 20, came to nearly $64,000, a 44% decrease from August 2020’s receipts. These dollars account for much of the city’s fund for the convention hall.

Since the Best Western opened in April, multiple organizations have cited the hotel as the deciding factor for plans to return to Enid.

Last month, people from 11 different states traveled to Enid to participate in a two-day major competition for the American Cornhole Organization.

Boryczki said the Best Western did fill some hotel rooms and that the organization wanted to return next year.

“There’s a chance down the road that could become a televised event, and if that could happen, we’d be in business,” Boryczki said during Wednesday’s meeting.