ENID, Okla. — Oklahoma gained 4,741 new COVID-19 cases on Saturday in what the Oklahoma State Department of Health is calling "significant community spread" plus a backlog of cases resulting from the transfer from a manual to electronic reporting system.

“Today’s significant rise in COVID-19 case numbers is alarming and we call on all Oklahomans to take immediate action to slow the spread of the coronavirus," said Oklahoma Commissioner of Health Dr. Lance Frye in a statement Saturday following the OSDH release. 'We can all work together to keep our friends, family and neighbors safe by limiting gatherings, wearing a mask, washing our hands and social distancing. We have the power to slow the spread, but we all must do our part."

The increase in numbers also likely contains duplicated cases, which will be corrected in data released Sunday, according to OSDH.

The OSDH had not updated its website with more information in regard to active cases and county and city breakdown of information as of 5 p.m. Saturday.

Jackson said Garfield County saw a decrease in new cases last week, and officials hypothesized it could have been due to less people out and less testing completed during the ice storm.

She added in recent days the county Health Department has seen an increase in positive cases from gatherings over the Halloween weekend and other close-contact get-togethers.

"Jumps like these are the reason we base trends like the COVID-19 alert map on a seven day average," she said in an emailed statement. "We encourage our community to Wash your hands, Watch your distance and Wear a mask."

In the OSDH's weekly report, the impact of masks in cities with a mandate and those without shows a 52% in the number of cases where there was mandate versus a 75% increase in towns and cities without mandates.

Enid does not have a mask mandate. The period measured was from Sept. 1 to Nov. 1, according to OSDH.

Even without the backlog and additional factors involved with the large increase on Saturday, OSDH officials reported the numbers would have continued to rise.

"We have reason to believe that our normal case count would have continued on an upward trajectory without the backlog and duplication," the department reported in an email release early Saturday afternoon.

"We know the daily case count alone doesn’t tell the full story," Frye said. "We will continue to look at the 7-day average of cases, percent positivity, hospitalizations and the nature of transmission so we can see the complete picture.

"I ask that all Oklahomans stay vigilant in protecting themselves and their loved ones from this highly-contagious virus and we all need to do our part to slow the spread now.”

The nearly 3.6% increase in cases took the overall COVID-19 cases to 136,492 since the virus was first confirmed in Oklahoma in early March, according to the OSDH. There have been 1,438 total deaths in the state in which COVID-19 was the cause or a contributor.

In addition, the state Health Department reported another nine deaths, including a Garfield County man in the 65 and older age group.

Other deaths in that age group were men in Cleveland, Osage, Rogers and Washita counties and women in Jackson and Oklahoma counties. Deaths of a Lincoln County man and a Tulsa County woman in the 50-64 age group also were reported. 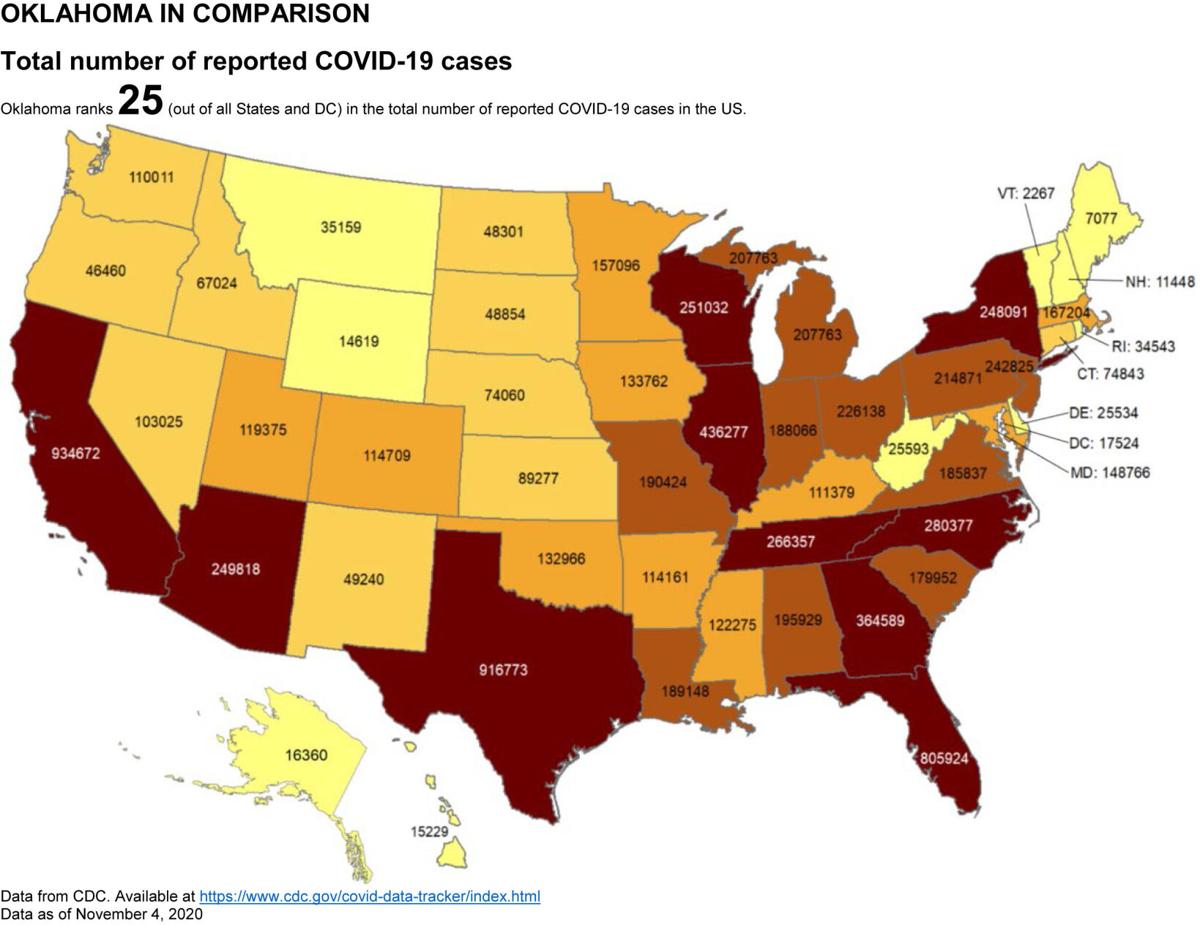 Cumulative COVID-19 hospitalizations rose by 145 to 9,583, based on OSDH data Saturday. Of those, 1,045 were in hospitals with or suspected of having COVID-19, with 312 in intensive care as of Friday evening, according to the OSDH Executive Report.

The number of COVID-19 cases and deaths in Oklahoma rose by more than 25% this past week, according to the Oklahoma State Department of Health weekly report.

The number of Oklahomans dying either due to the virus or from complications involving it increased 25.9%, with 107 reported this past week compared to 85 the week prior, according to OSDH.

The number of recovered cases was at 7,776, an increase of 1.3%, and hospitalizations linked to COVID-19 rose by 7.2% in a week-to-week comparison, according to the OSDH.

OSDH reports 73% of those dying from the virus had at least one chronic condition, including heart, renal, lung and liver disease and diabetes.