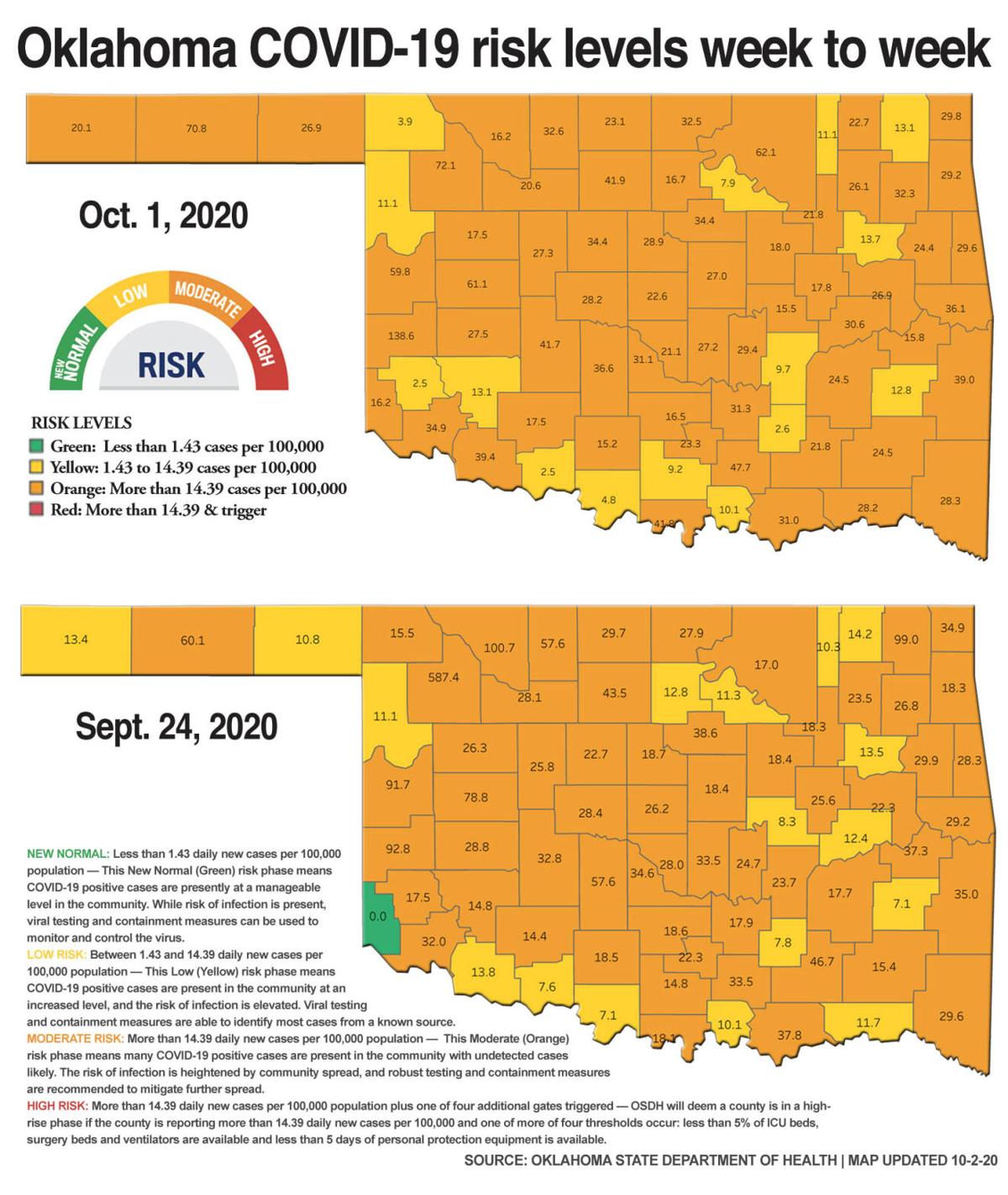 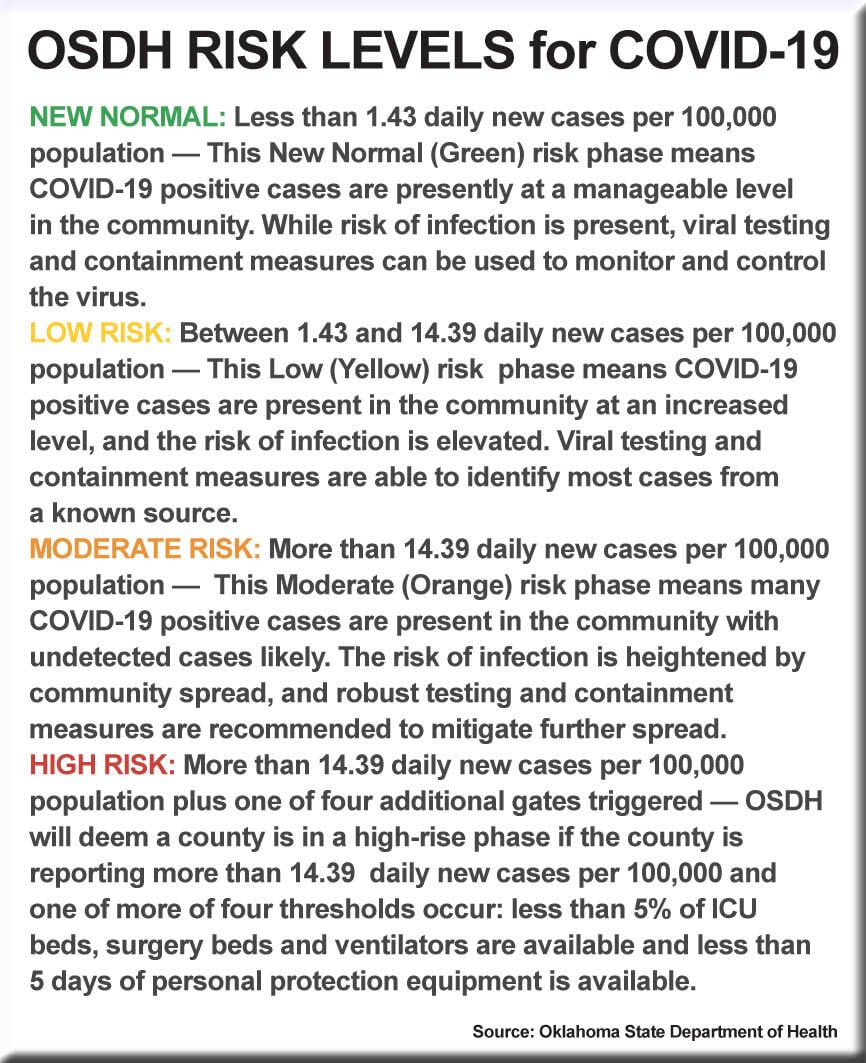 ENID, Okla. — Most of the state's 77 counties remained at moderate risk for COVID-19 this past week, according to new daily case numbers released Friday by the Oklahoma State Department of Health.

Garfield County has been in the orange, or moderate risk, designation for months, with 41.9 cases per day per 100,000 reported Friday. That number was lower than last week, which was reported at 43.5, according to OSDH.

The designation means Enid and Chisholm public schools will continue to meet in-person in the traditional classroom setting, as agreed upon by their respective districts.

"The EPS plan states that if our county moves to 50 or more positive COVID-19 cases per 100,000 population, as indicated by the OSDH, the entire district will move to distance/virtual learning," according to a release from the district Friday, which also states parents and guardians should prepare for distance learning in the future should the state average above 50 daily cases per 100,000 population or enter the high risk, color-coded red, for COVID-19.

OSDH reported Friday it now is calculating the alert system by the date the COVID-19 positive result was reported, rather than date of symptom onset, as previously done.

"This improves transparency, as the calculations can be performed with publicly available data," the OSDH release states.

OSDH confirmed 1,190 new cases of the virus and nine more deaths, including a Fort Supply man in the 65 and older age group, on Friday.

Garfield County gained 31 cases on Friday, according to OSDH, with 348 of those active and 1,429 recovered. Enid saw a single-day increase of 30 cases, with 312 active and 1,345 recovered, OSDH data shows.

Statewide there have been 6,569 Oklahomans test positive for COVID-19 in hospitals, a single-day increase of 59, OSDH reported Friday morning. Of those, 655 were hospitalized, an increase of 32, with 228 in intensive care, a decrease of six, as of Friday evening's OSDH Executive Report.

There were 42 Oklahomans hospitalized who had tested positive for COVID-19 in the Northwest region of the state, a single-day increase of five, according to Friday's Executive Report.

That same report shows only 139 of 968 ICU beds are available in the state, with 94% of hospitals reporting. The report does not state how many of those beds are used for patients who have tested positive for COVID-19.

OSDH reported earlier Friday in its COVID-19 alert report that the percent of health care beds was considerably lower in the two larger metro areas and the central region of the state, with 15.9% available in the Tulsa region, 20.2% in the Oklahoma City region and 22% in the central region. Bed space is at 69.8% in the Northwest Region, according to the report, which was for the week ending Thursday.

There have been 46,612 Oklahoma women and 42,886 men who have tested positive for COVID-19. There were 61 listed as unknown gender, according to OSDH data on Friday.

Data shows deaths in 67 of Oklahoma's 77 counties, with 197 in Oklahoma County; 167 in Tulsa County; 74 in Cleveland County; 52 in Rogers County; 41 in Washington County; 34 each in Creek and McCurtain counties; 26 each in Delaware and Wagoner counties; 24 in Muskogee County; 21 each in Caddo and Garfield counties; 20 in Pittsburg County; 19 in LeFlore County; 17 in Canadian County; 13 each in Comanche, Kay and Osage counties; 11 each in Grady, Mayes and Sequoyah counties; 10 each in Adair, Jackson, Lincoln and Pottawatomie and Texas counties; nine in Carter County; eight each in Cherokee, Greer and Okmulgee counties; seven each in McClain, Payne and Ottawa counties; six each in McIntosh and Seminole counties; five each in Bryan, Garvin, Okfuskee, Stephens and Woodward counties; four each in Beckham, Haskell, Hughes, Johnston and Nowata counties; three each in Cotton, Noble, Pawnee and Pontotoc counties; two each in Choctaw, Kingfisher, Kiowa, Latimer, Logan, Marshall, Pushmataha and Tillman counties; and one each in Atoka, Blaine, Craig, Dewey, Grant, Harper, Love, Major, Murray and Roger Mills counties.

In Enid, there have been 901 cases, with 727 recovered and 11 deaths from the 73701 ZIP code, primarily the eastern half of the city, and 768 cases, with 611 recovered and 10 deaths from 73703, or the western half, according to OSDH data on Friday. There also has been one recovered case in the 73705 ZIP code, which is listed as Vance Air Force Base at https://www.unitedstateszipcodes.org/.