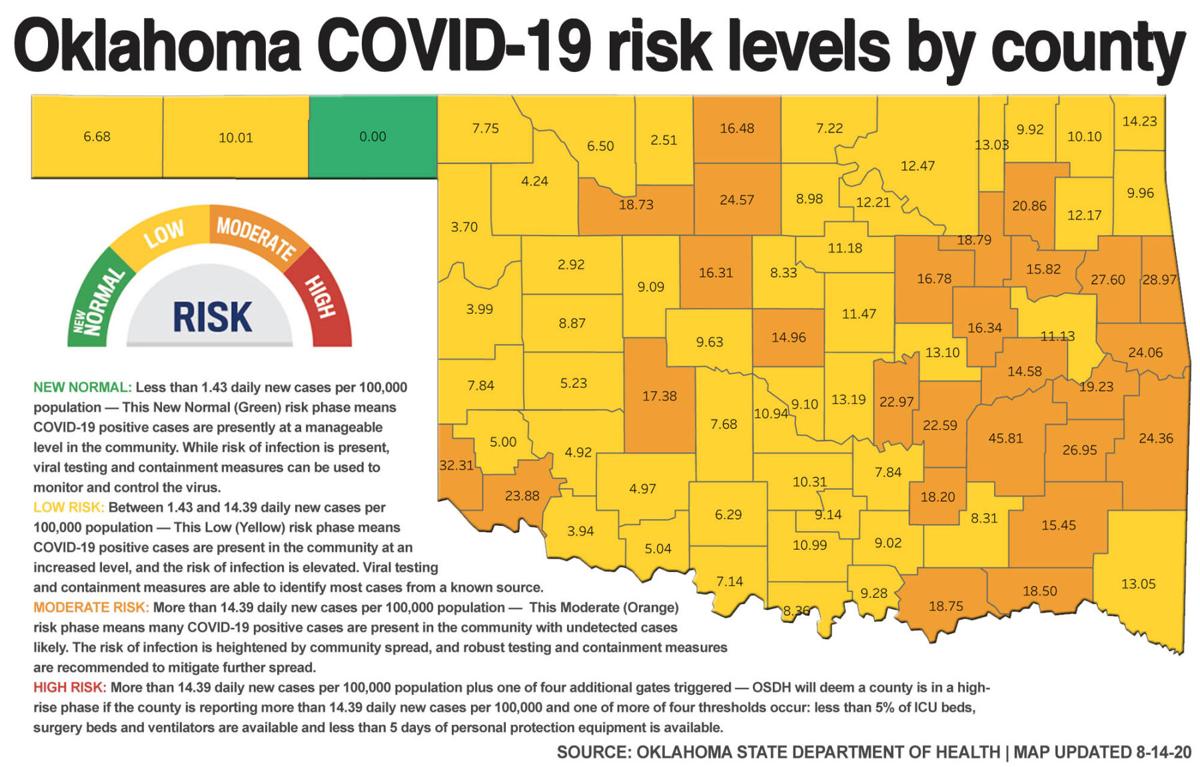 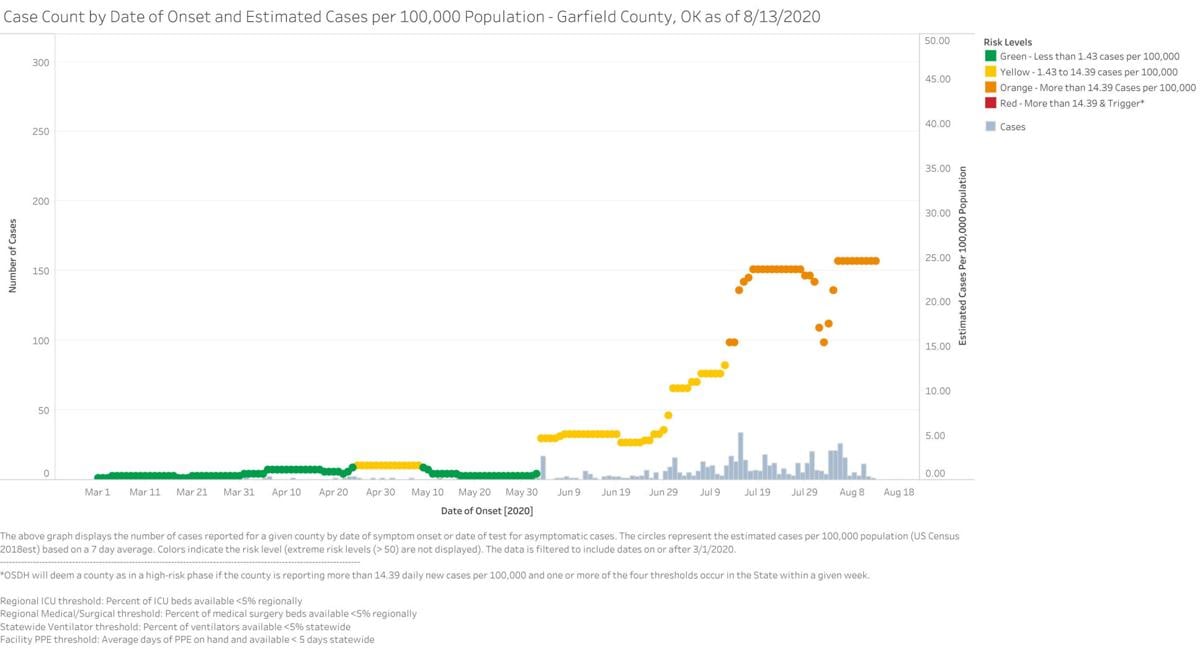 ENID, Okla. — Garfield County has risen back into the moderate risk level for COVID-19 as another death and 26 more cases were reported in the county Friday by the Oklahoma State Department of Health.

OSDH reported four counties were added to the "orange" risk zone, considered to be moderate. Some counties were lowered from orange to "yellow," the low risk color code on the map. Four were added in the northwestern region of Oklahoma, based on a comparison to last week's risk assessment map. 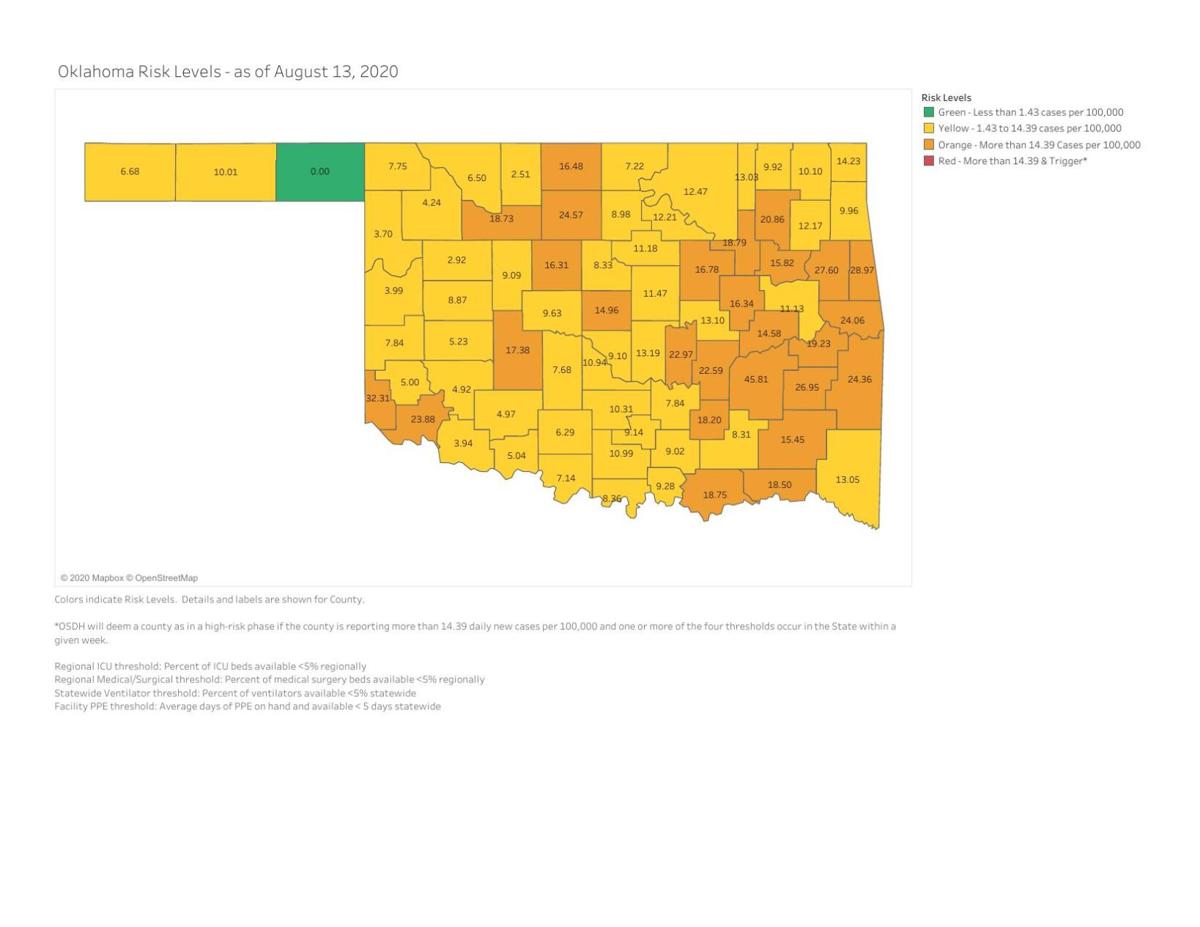 In addition to Garfield, Grant, Kingfisher and Major counties were upgraded from low to moderate risk, which is defined as trending more than 14.39 daily new cases per 100,000 population, according to OSDH.

Enid Public Schools' current policy is to hold a split A/B schedule, with only half the students attending in person and the other half through distance learning, if the county goes into a moderate risk. However, school administrators said last week classes will held in person for students who did not sign up for total virtual learning for the first seven days of school, which began Thursday.

The EPS Board of Education will meet Monday to determine if they will change the policy to allow for the COVID-19 positive cases to reach 35-49 cases per 100,000 before implementing an A/B schedule.

OSDH reported a cumulative 555 cases in Garfield County on Friday, an increase of 26 compared to Thursday's report. Of those cases, 167 are active.

The death of an Enid woman in the 65 and older age group was reported Friday, the second consecutive day OSDH reported a local resident in that age range succumbed to the virus.

Other case increases in Northwest Oklahoma counties included two each in Blaine and Major and one each in Alfalfa and Woodward. Cities and towns seeing an increase in confirmed cases included 15 in Enid; three in Hennessey; two each in Fairview and Okarche; and one each in Cashion, Garber, Hillsdale, Kingfisher, Longdale, Seiling, Watonga and Woodward. Fairmont, Goltry and Kremlin all picked up their first cases, with one each also on Thursday, according to OSDH.

Overall in Oklahoma, there were 794 additional COVID-19 cases and six more deaths, including the one reported in Garfield County, on Friday, according to the OSDH. The state has 27 counties in the orange, or moderate risk zone; 49 counties in the yellow or low risk zone; and one county in the green, or "new normal," risk zone.

There have been 644 Oklahomans — 1.4% of those confirmed to have tested positive for the virus — who have died. These individuals had COVID-19 listed as the cause or contributor to their deaths, according to Rob Crissinger, manager with communications and media relations for the Health Department.

There have been 3,953 cumulative hospitalizations in the state, a single day increase of 52, according to OSDH data Friday. Of those, 506 were hospitalized, a decrease of 61, with 236 of those in intensive care, a decrease of four, as of the OSDH Executive Report Friday evening.

In Enid, St. Mary's Regional Medical Center was treating five patients who have tested positive for COVID-19 and Integris Bass Baptist Health Center has three patients with the virus, as of Friday.

Of those testing positive, 24,531 have been female and 22,325 have been male. There were 41 listed as "unknown" gender, according to OSDH data on Thursday.

Data shows deaths in 56 of Oklahoma's 77 counties, with 124 in Oklahoma County; 113 in Tulsa County; 56 in Cleveland County; 39 in Washington County; 28 in McCurtain County; 23 in Wagoner County; 20 in Delaware and Rogers counties; 18 in Caddo County; 16 in Muskogee County; 15 in Creek County; 12 in Osage County; 11 in Kay County; 10 in Comanche County; nine each in Canadian and Pottawatomie counties; eight in Greer County; seven each in Garfield, Grady, Jackson, Mayes and Texas counties; six in Adair County; five each in Carter and Seminole counties; four each in Garvin, McClain, Payne, Pittsburg and Sequoyah counties; three each in Lincoln, Ottawa, Pawnee, Okmulgee and Stephens counties; two each in Cherokee, Cotton, Hughes, Latimer, Noble and Pontotoc counties; and one each in Beckham, Bryan, Choctaw, Craig, Haskell, Kiowa, Leflore, Logan, Major, Marshall, McIntosh, Nowata, Okfuskee, Roger Mills and Tillman counties.

In Enid, there have been 284 cases, with 189 recovered and four deaths from the 73701 ZIP code, primarily the eastern half of the city, and 230 cases, with 167 recovered and three deaths from 73703, or the western half, according to OSDH data on Friday. There also has been one recovered case in the 73705 ZIP code, which is listed as Vance Air Force Base at https://www.unitedstateszipcodes.org/.