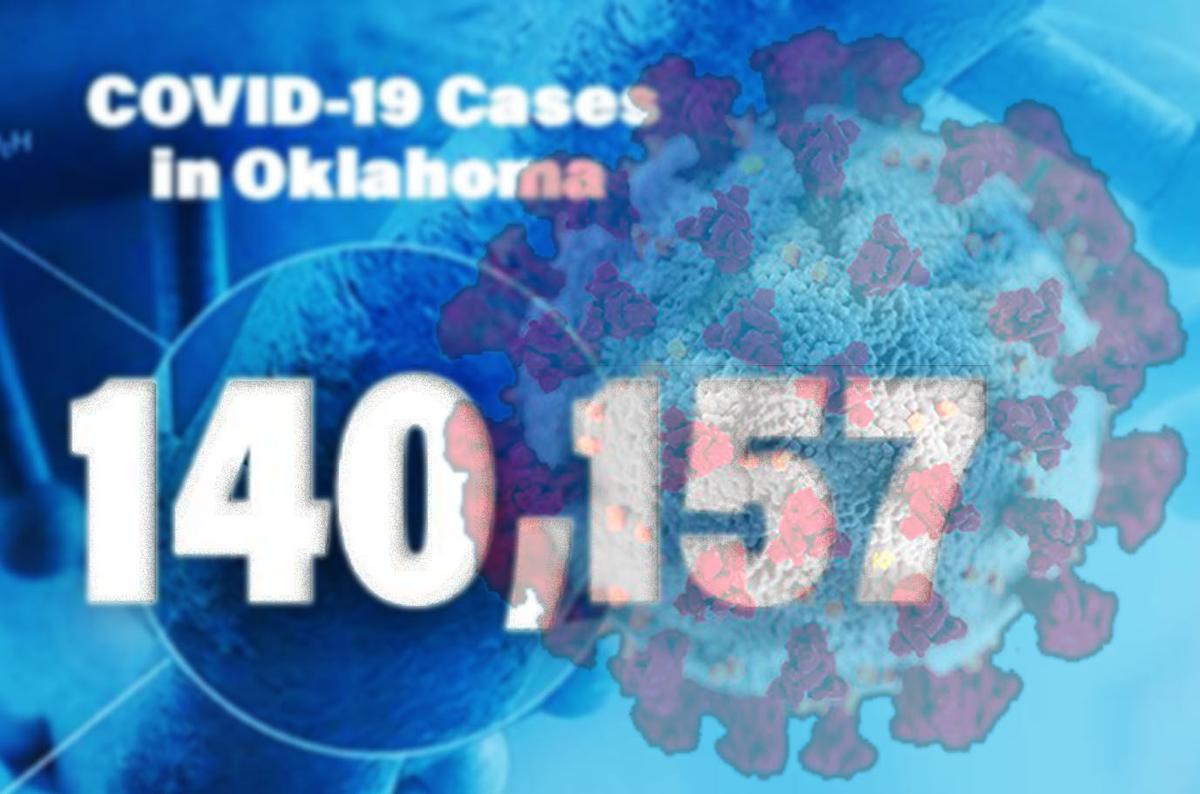 ENID, Okla. — An Alva woman was one of seven COVID-19-related deaths reported Tuesday, as case numbers continued to rise, with 1,702 more confirmed by the Oklahoma State Department of Health.

The 1.2% increase took the overall number of cases to 140,157, with 2,827 of those in Garfield County, a single-day gain of 34, according to OSDH, which reported on its Executive Report Tuesday evening that 99% of the specimens resulting in newly reported cases were collected between Oct. 26 and Nov. 8.

OSDH is five days into its upcoming weekly risk map for COVID-19, and Garfield County has seen an average daily COVID-19 case count of 65.2, based on OSDH data. That is over the 50-case average Enid Public Schools board has set as a trigger to enact distance learning for all students. District officials said the official call will be made Friday morning  when the OSDH map is released on whether to hold in-person classes for the coming week.

In addition to the Woods County resident, its first death to COVID-19, OSDH announced the deaths of five others in the 65 and older age group: two Tulsa County men, women from Cleveland and Creek counties and a Pottawtomie County man. The death of a Logan county man in the 50-60 age group also was reported.

Local hospitals have reported recent COVID-19-related deaths, but reports are confirmed by OSDH before becoming part of the official COVID-19 data, officials have said. Hospitals do not release any identifying factors such as age, gender or residence.

Statewide, cumulative COVID-19 hospitalizations since the beginning of the virus were listed at 9,682 on Tuesday morning, an increase of 61. Of those, 1,248 were in hospitals with or suspected of having COVID-19, a single-day increase of 46, with 340 in intensive care, an increase of six, as of Tuesday's Executive Report.

Adult ICU bed availability in the state was at 6% and medical/surgical beds were at 13% availability statewide with a 97% hospital response rate, according to the Executive Report. That same report shows the Northwest region for OSDH with 72 cases, an increase of 12, and two more under investigation for the virus.

Other Northwest Oklahoma county case increases on Tuesday were 24 in Woodward, 10 each in Kingfisher and Major, six in Noble, five in Blaine and two each in Alfalfa and Grant, according to OSDH. Woods County saw a reduction of three cases.

Case gains in Northwest Oklahoma cities and towns included 31 in Enid, 24 in Woodward, nine in Fairview, five each in Hennessey and Watonga, four each in Alva and Kingfisher, three in Billings and one each in Carmen, Cashion, Kremlin, Meno, Ringwood and Waynoka.

The number of Enid Public Schools students and staff members in isolation or quarantine due to COVID-19 continued to rise Tuesday.

The district reports 561 people are either in positive-test isolation or close-contact quarantine, according to figures on the EPS website Tuesday, up from 523 on Monday. That number was 395 on Friday.

Enid High School leads the district with 20 positive cases — 15 students and five staff members. That's up from 18 on Monday and 10 on Friday.

Two staff members in transportation and one staff member in IT also are in positive-test isolation.

Five entire classes in the district are quarantined and doing distance learning, including two at Hayes, and one each at Monroe, Glenwood and Taft. One class at Monroe no longer is in quarantine.

Although only two classes at Hayes officially are in quarantine, district officials decided to transition all 238 students to distance learning this week in an effort to stop the spread of the coronavirus.

One person was on campus, primarily in the health wing, Wednesday and Thursday. Another was primarily in the northwest wing Thursday and Friday. Both now are isolating at home since they tested positive. All areas were closed temporarily, according to the school, and were sanitized and deep cleaned.

There have been 73,293 Oklahoma women and 66,821 men who have tested positive for COVID-19, according to OSDH as of Tuesday. There were 43 designated as unknown gender.

Data shows deaths in 71 of Oklahoma's 77 counties, with 250 in Oklahoma County; 228 in Tulsa County; 113 in Cleveland County; 57 in Rogers County; 43 in Washington County; 41 each in Creek and McCurtain counties; 31 each in Garfield and Wagoner counties; 30 in Delaware County; 28 in Muskogee County; 26 in Caddo County; 25 in LeFlore county; 24 in Canadian County; 23 in Lincoln County; 22 in Comanche County; 21 each in Ottawa and Pittsburg counties; 19 in Pottawatomie County; 18 each in Grady, Jackson and Kay counties; 17 each in Mayes and Osage counties; 16 each in Bryan and McClain counties; 15 each in Beckham and Payne counties; 14 each in Okmulgee and Sequoyah counties; 13 in Adair County; 12 each in Carter and McIntosh counties; 10 in Texas County; nine in Stephens County; eight each in Cherokee, Garvin, Greer and Okfuskee counties; seven each in Custer, Hughes and Seminole counties; six each in Kingfisher, Pontotoc, Pushmataha and Woodward counties; five each in Haskell and Pawnee counties; four each in Johnston, Nowata, Roger Mills and Tillman counties; three each in Cotton, Kiowa, Latimer, Logan, Murray and Noble counties; two each in Blaine, Choctaw, Craig, Grant, Harper, Major, Marshall and Washita counties; and one each in Atoka, Beaver, Dewey, Jefferson, Love and Woods counties.

• Kingfisher with 656 cases, 576 recovered, 74 active and six deaths, including one in Kingfisher reported Oct. 23 and two in Hennessey, reported Sept. 1 and Aug. 27; there also have been three in Okarche, part of which is in Canadian County, reported Nov. 9 and Nov. 2;

State Health Department officials are encouraging Oklahomans to get tested for COVID-19, saying that due to adequate supplies residents no longer need to exhibit symptoms or report exposure to someone with the virus to get in line for testing.

Story has been corrected to state Enid Public Schools could be out of the school buildings for two weeks, with the first week seeing long-distance learning before students dismiss for Thanksgiving week, if case numbers continue to rise at current rate.