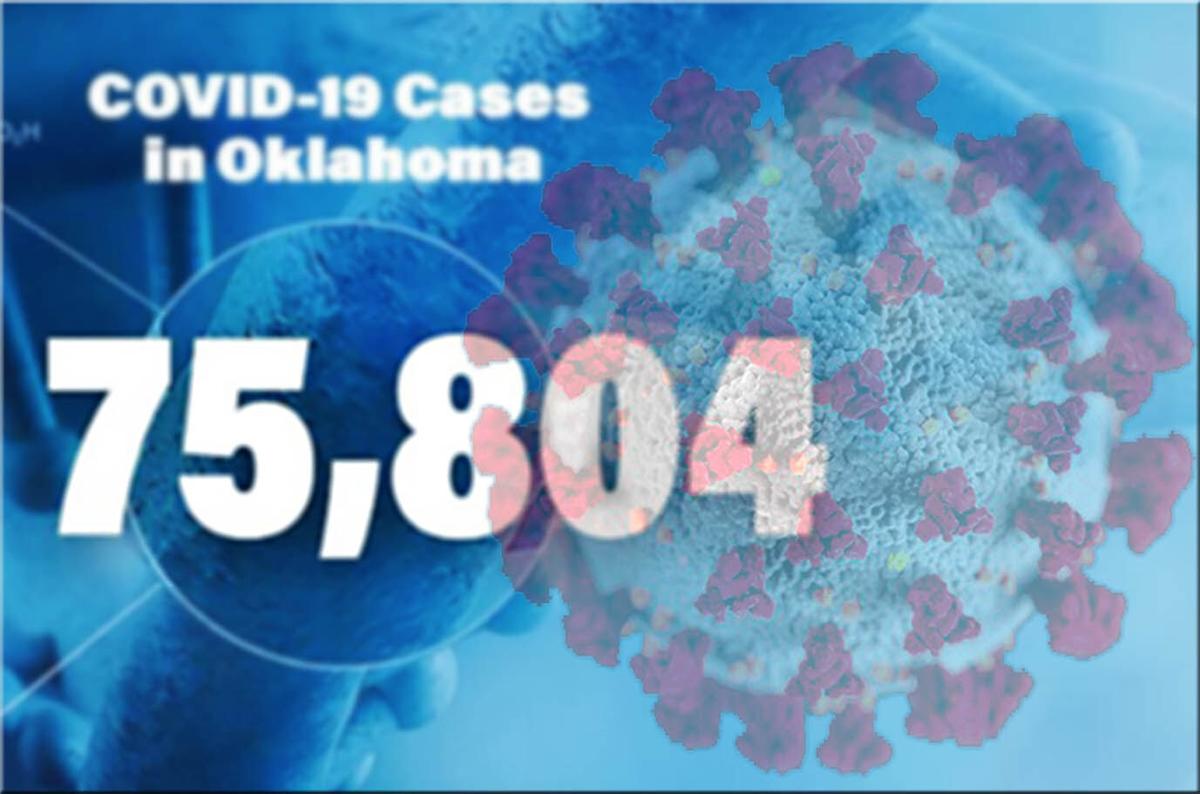 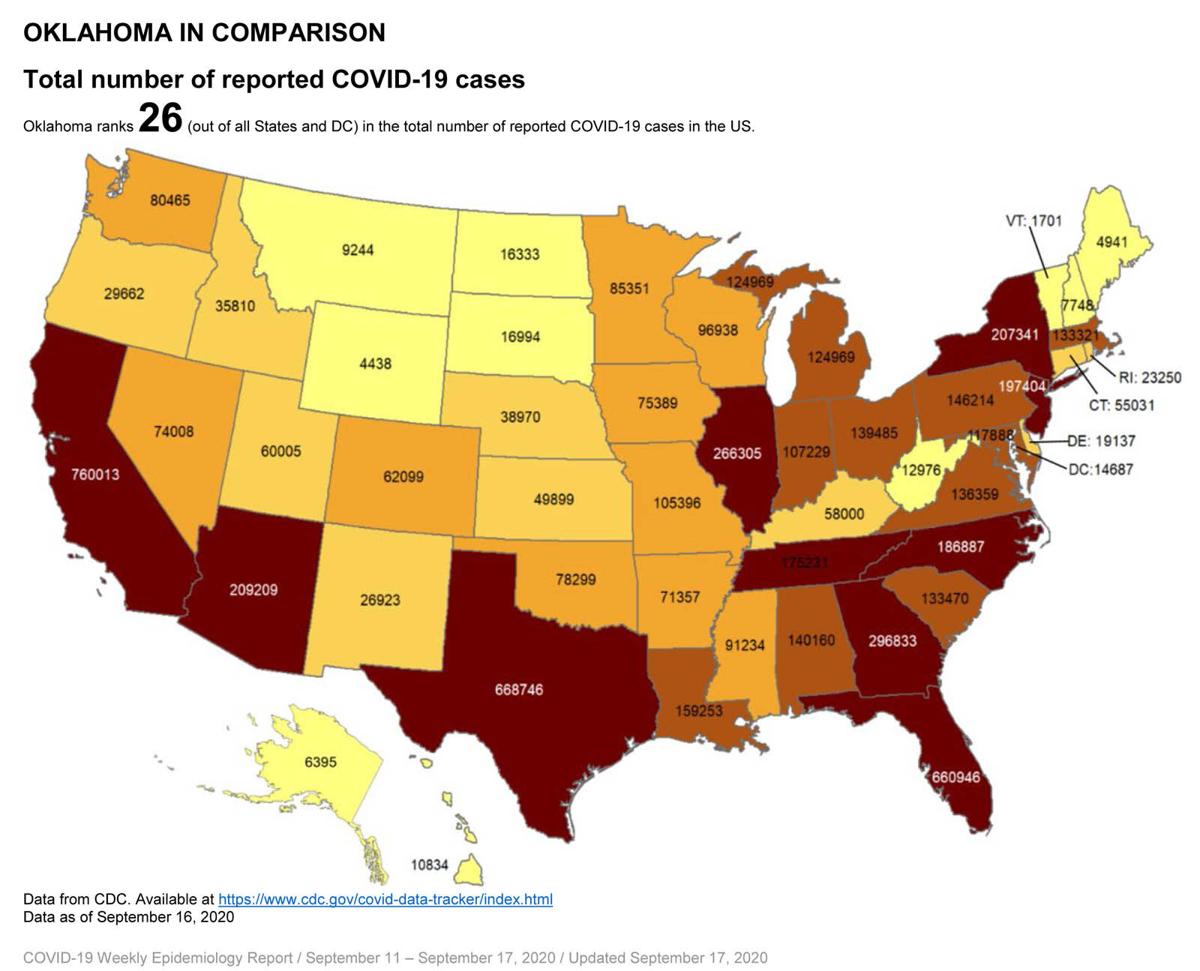 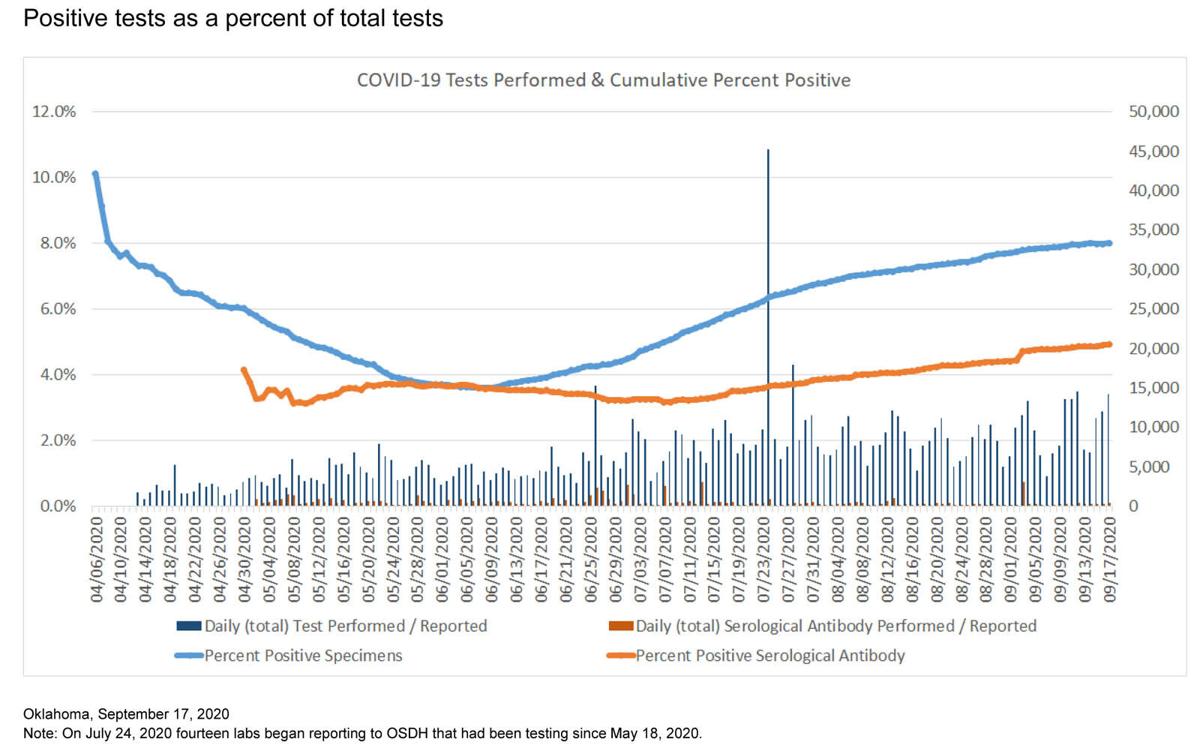 ENID, Okla. — Oklahoma saw an increase of 1,237 COVID-19 cases on Saturday that included a jump of 144 in Fort Supply, corresponding with hundreds of positive tests at a detention facility confirmed by the state Department of Corrections the day before.

William S. Key Correctional Center reported 221 inmates are positive for COVID-19 in the open-dorm, minimum-security prison, according to the ODOC website. Four inmates have been hospitalized and 21 have recovered. There have been seven staff members test positive, with four recovered, according to ODOC on Friday.

Oklahoma State Department of Health had reported 30 COVID-19 cases in the Woodward County town of Fort Supply, where William S. Key is located, on Friday, but the number of positives rose to 174 on Saturday as the case reports began to catch up on the OSDH website.

There have been 943 who have died because or due to complications of the virus, with four of those announced on Saturday.

Two men and two women in the 65 and older age group from Creek, Garvin, Rogers and Wagoner counties made up the most recently confirmed deaths associated with the virus, according to OSDH.

The number of COVID-19 cases, recoveries and deaths associated with the virus all rose in the week of Sept. 11-17 as compared to the prior week, according to the OSDH weekly report.

Hospitalizations also were higher in the past week, with 380 confirmed, a 24.6% increase over the prior period.

In a breakdown of age groups, those between 15-24 made up the highest percentage, 25.4%, of the new cases between Sept. 11-17, while the 65-74 age group recorded the highest number of deaths at 17, according to the OSDH report.

The OSDH maintains Oklahomans should seek out testing, with or without symptoms, to assist with contact tracing efforts regarding the virus. OSDH also reports that the recent numbers show community transmission is reflected in the current trend of data, and Oklahomans should practice social distance, wearing masks and frequent hand-washing.

Other Northwest Oklahoma county case increases on Saturday were 131 in Woodward, 14 in Alfalfa, five in Kingfisher, two in Blaine and one each in Grant, Major and Noble. Case increases in cities and towns included 12 in Helena, three in Woodward, two in Hennessey and one each in Cashion, Cherokee, Drummond, Dover, Kingfisher, Longdale, Mooreland, Okeene, Pond Creek and Watonga. Canton saw a reduction of one case.

Of those Oklahomans testing positive, 39,851 have been women and 35,929 have been men. There were 28 listed as unknown gender, according to OSDH data on Saturday.

Data shows deaths in 65 of Oklahoma's 77 counties, with 180 in Oklahoma County; 152 in Tulsa County; 68 in Cleveland County; 47 in Rogers County; 40 in Washington County; 33 in McCurtain County; 30 in Creek County; 24 in Wagoner County; 23 in Delaware County; 21 in Muskogee; 20 in Caddo County; 19 in Pittsburg County; 18 in Garfield County; 17 in LeFlore County; 16 in Canadian County; 13 each in Kay and Osage counties; 12 in Comanche County; 10 each in Adair, Grady, Jackson, Lincoln, Mayes and Sequoyah counties; nine in Pottawatomie County; eight each in Carter, Greer, and Texas counties; seven in Cherokee County; six each in McClain and Payne counties; five each in Garvin, Okmulgee, Seminole and Stephens counties; four each in Bryan, Haskell, Hughes, Johnston, McIntosh, Okfuskee and Ottawa counties; three each in Cotton, Nowata, Pawnee and Pontotoc counties; two each in Choctaw, Kingfisher, Kiowa, Latimer, Noble and Tillman counties; and one each in Atoka, Beckham, Blaine, Craig, Dewey, Harper, Logan, Love, Major, Marshall, Murray, Pushmataha and Roger Mills counties.