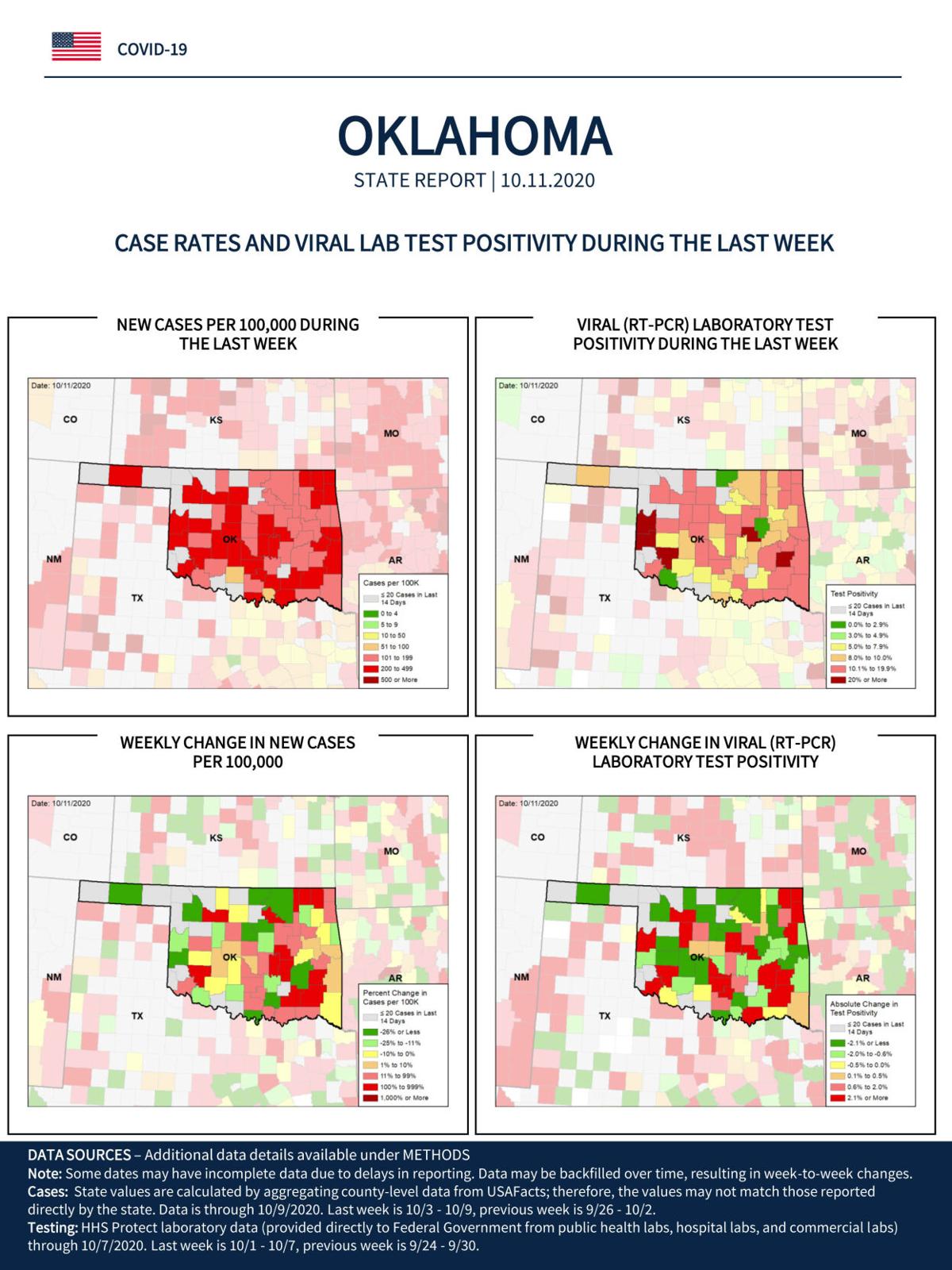 ENID, Okla. — COVID-19 cases increased by 1,221 on Thursday, with 11 more deaths reported in the state, none in Northwest Oklahoma, according to the Oklahoma State Department of Health.

Statewide, there have been 1,143 deaths in which the virus was the cause or a contributing factor since the pandemic reached Oklahoma in March, according to the OSDH.

Deaths reported Thursday were six men and five women, with nine in the 65 and older range and one each were in the 50-64 and 36-49 age ranges. Counties of residence were four in Oklahoma and one each in Canadian, Cleveland, Craig, Delaware, Okfuskee, Payne and Stephens. OSDH did not provide a breakdown of gender and age per county.

Cumulative hospitalizations rose by 72 to 7,529 as of Thursday evening, according the OSDH's evening Executive Report. Of those, 793 patients positive or under investigation for the virus were in hospitals, a single day increase of 12, with 291 in intensive care, according to report.

In Enid, St. Mary's Regional Medical Center reported 12 inpatients testing positive for COVID-19 on Thursday. Integris Bass had 16 inpatients on Wednesday and did not provide a report Thursday.

Other Northwest Oklahoma county case increases on Thursday were five in Woods, four in Kingfisher, three in Alfalfa, two each in Blaine, Grant and Major and one each in Noble and Woodward. Case increases in Northwest Oklahoma cities and towns included five in Alva, three in Waukomis, two each inFairview, Okarche and Pond Creek and one each in Cherokee, Helena, Hennessey, Kingfisher, Lahoma, Mooreland and Woodward.

A day before the OSDH is set to release its own COVID-19 alert map, Oklahoma remained in the national red zone for cases of the virus, ranking 9th highest in the country, according to the White House report for Oklahoma. The state went down for test positivity, falling into the orange zone with the 8th highest rate in the country.

The national indicator differs from the OSDH ranking, which is released every Friday and has had the majority of the state in the orange, or moderate, category. There had not been a red category reached by an Oklahoma County based on the state model, which can only be obtained with higher daily case averages along with four triggers: less than 5% of ICU beds, surgery beds and ventilators available statewide and less than 5 days of personal protection equipment available.

In the White House report Garfield County ranks among the national red counties, along with Alfalfa, Blaine, Kingfisher, Major and Woodward counties.

There have been 54,133 Oklahoma women and 49,542 men who have tested positive for COVID-19 as of the OSDH report Thursday morning. There were 161 listed as unknown gender.

Data shows deaths in 68 of Oklahoma's 77 counties, with 212 in Oklahoma County; 182 in Tulsa County; 85 in Cleveland County; 53 in Rogers County; 41 in Washington County; 37 in McCurtain County; 36 in Creek County; 27 each in Delaware, Muskogee and Wagoner counties; 23 each in Caddo and Garfield counties; 21 in LeFlore County; 20 each in Canadian and Pittsburg counties; 15 each in Comanche and Kay counties; 13 each in Grady, Osage and Sequoyah counties; 11 each in Adair, Jackson, Mayes and Pottawatomie counties; 10 each in Lincoln and Texas counties; nine in Carter and Payne counties; eight each in Beckham, Cherokee, Greer, McIntosh, McClain, Okmulgee, Ottawa and Stephens counties; six each in Garvin, Okfuskee and Seminole counties; five each in Bryan, Haskell, Pawnee and Woodward counties; four each in Hughes, Johnston, Nowata, Pontotoc and Pushmataha counties; three each in Cotton and Noble counties; two each in Choctaw, Craig, Custer, Kingfisher, Kiowa, Latimer, Logan, Major, Marshall, Murray, Roger Mills and Tillman counties; and one each in Atoka, Blaine, Dewey, Grant, Harper and Love counties.

In Enid, there have been 1,024 cases, with 873 recovered and 13 deaths from the 73701 ZIP code, primarily the eastern half of the city, and 927 cases, with 751 recovered and 10 deaths from 73703, or the western half, according to OSDH data on Thursday. There also has been one recovered case in the 73705 ZIP code, which is listed as Vance Air Force Base at https://www.unitedstateszipcodes.org/.

Increases in COVID-19 cases at long-term care facilities include one case and one death at The Living Center and one case at Garland Road Nursing and Rehab Center, in Enid, and one case at Summers Health Care in Blaine County, according to OSDH's Executive Report Thursday.