ENID, Okla. — ICU beds reportedly were full in Northwest Oklahoma hospitals earlier this week, and the new wave of COVID-19 is becoming “emotionally taxing” on health care workers, according to a local hospital official.

Garfield County gained 195 new COVID-19 cases and saw two more deaths from the virus in the past seven days, according to the Oklahoma State Department of Health's weekly situation report Wednesday, Sept. 8, 2021.

Statewide, there have been 820 hospitalizations in the past week, bringing the total hospitalizations to 32,675 since the first case was confirmed in Oklahoma in March 2020. OSDH reported a three-day average of 1,395 total COVID-19 hospitalizations — including 29 pediatric hospitalizations, a decrease from 82 since last week. Of those, 377 are in the ICU across the state.

OSDH reported, as of Tuesday, there were zero ICU beds and 211 adult inpatient beds, or 53.1% of the total, available in the Northwest Region, which consists of 18 counties including Garfield County. Healthcare workers have continued to emphasize that bed counts are fluid, constantly changing with patient conditions and hospital efforts to maximize space and treatments.

As COVID-19 cases continue to rise in Garfield County and throughout the state, caregivers at Bass are encouraging the public to get the COVID-19 vaccination to help stop the spread of the virus and keep people out of the hospital, according to a press release.

“Our caregivers are fearful that numbers will continue to increase, and the situation will become more difficult to manage,” Kenna Wilson, chief nursing officer at Bass said in the release, calling the situation "emotionally taxing" for staff. “At times, we don’t have beds for patients, and that can be equally as stressful for the caregivers as it is for the patients.”

The plea comes about two weeks after the Food and Drug Administration approved the Pfizer vaccine, and Wilson said she hoped more people would now consider becoming vaccinated.

“I believe that the FDA’s approval of the vaccine will help people see that a lot of work has gone into ensuring that the vaccine is safe and effective in stopping the spread of COVID-19,” she said. “Seeing others who have received the vaccine stay healthy is a solid reason to consider it, and for those on the fence about receiving the vaccine, I would encourage them to seek advice from their primary care physician.”

Of the county’s 146 deaths, most also have been in Enid, at 135, according to OSDH city data, with five in Lahoma, one each in Drummond, Fairmont, Garber, Covington and Waukomis, and one not listed by town. Deaths listed by ZIP code on the OSDH website show Enid with 133 deaths.

In Northwest Oklahoma, single deaths were reported in Blaine and Woodward counties by the OSDH on Wednesday.

Learn what COVID-19 tests are available and how the testing process works at several locations in Enid and Garfield County.

OSDH showed 572,223 total cases from CDC provisional state data, including 1,300 from Wednesday, and 568,874 total cases, a weekly increase of 18,635, with OSDH’s disease investigation summary. Of the latter number, there were 27,332 active, an increase of 692 in the past week. OSDH no longer reports recovered cases.

Other Northwest Oklahoma county case increases in the past week included 81 in Noble, 65 in Blaine, 55 in Kingfisher, 44 in Woods, 36 in Woodward, 28 in Grant, 23 in Major and nine in Alfalfa.

OSDH’s weekly numbers — which OSDH acute disease service reports to the CDC — on Wednesday showed Oklahoma has 8,208 confirmed deaths, a weekly increase of 207, though the CDC/NCHS’ Provisional Death Count, which is based on death certificates and is OSDH’s primary reported number, placed the overall count in Oklahoma at 9,370 deaths, a weekly increase of 171, in which the coronavirus was the cause or a contributor.

Self-reported positive COVID cases remained at similar levels for another week on Wednesday at schools in the Enid area.

Nearly half of the 53 Enid Public Schools students currently isolating after testing positive continue to be from the high school and three middle schools, according to the district’s case count regularly updated online.

Six students each from Prairie View and Glenwood elementary schools also are in positive-case isolation, the most from elementaries, according to EPS.

Ten staff members from several EPS sites are in isolation, as well.

The district does not require community members to quarantine for possible exposure or close contact, so no numbers are available.

Autry Technology Center has reported seven more positive cases since Sept. 2, all on its main campus.

Those individuals were in campus hallways at specific times from Aug. 27 to as recently as Tuesday, Sept. 7, before testing positive between one to four days later.

The CareerTech center does not report current active cases or quarantines.

The Enid site of Northern Oklahoma College last week reported the most positive cases of its three campuses.

Eight Enid students have tested positive for COVID and are in isolation, with 17 more quarantining for possible exposure, according to NOC’s weekly update from Friday.

Of NOC’s 280 total cases, 244 individuals have been physically present on campus.

NOC is the only school in the Enid area — including both k-12 and above — currently sharing numbers of individuals in quarantine along with positive-case isolation totals.

Northwestern Oklahoma State University reported 10 total active student cases and zero staff members as of last Friday on all of its campuses, but the college does not report on which of its Alva, Enid or Woodward campuses.

Chisholm Public Schools reports whenever a new case has been identified, but no other public schools in the immediate Enid area report current or active positive case totals. 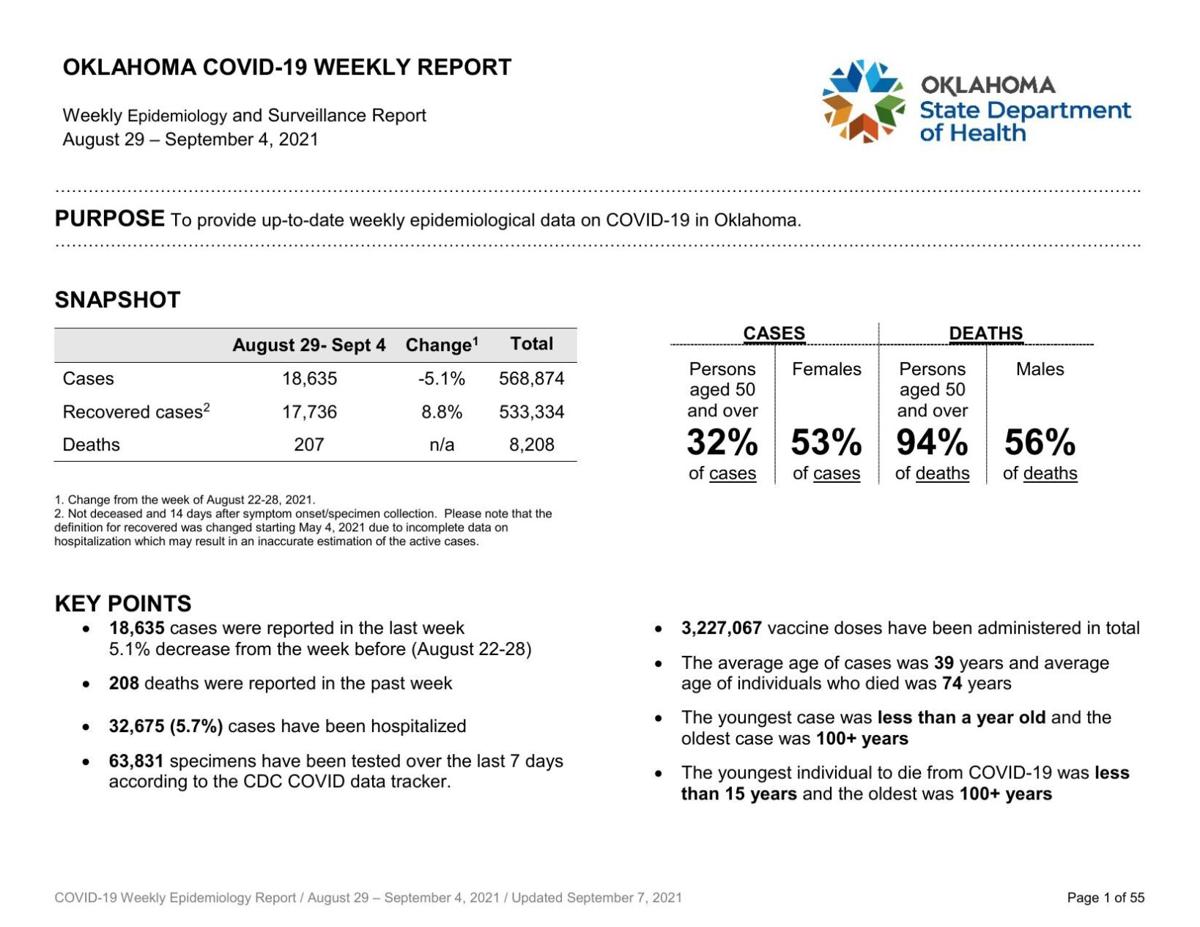 Oklahoma also saw a 5.1% decrease in the number of reported cases statewide compared with the previous week, according to OSDH’s weekly epidemiology report from the week of Aug. 29 through Sept. 4.

• Kingfisher with 2,395 cases, 2,261 recovered, 91 active and 43 deaths, 21 from Kingfisher, 12 from Hennessey, five from Okarche — which Kingfisher shares with Canadian County — two from Dover and three not listed by town.

• Alfalfa with 1,232 cases, 1,209 recovered, 16 active and seven deaths, with city data listing three from Carmen, two each from Aline and Helena and one each from Cherokee and Jet. City data encompasses rural towns that could include those residing in neighboring counties, which could cause the discrepancy.

• Grant with 647 cases, 603 recovered, 37 active and seven deaths, three from Wakita and one each from Deer Creek, Lamont, Medford and Nash.

McKendrick is police and court reporter and Ewald is city/education reporter for the Enid News & Eagle.

COVID-19 cases per county in Oklahoma as reported by the Oklahoma State Department of Health Wednesday, Sept. 8, 2021. SOURCE: OSDH