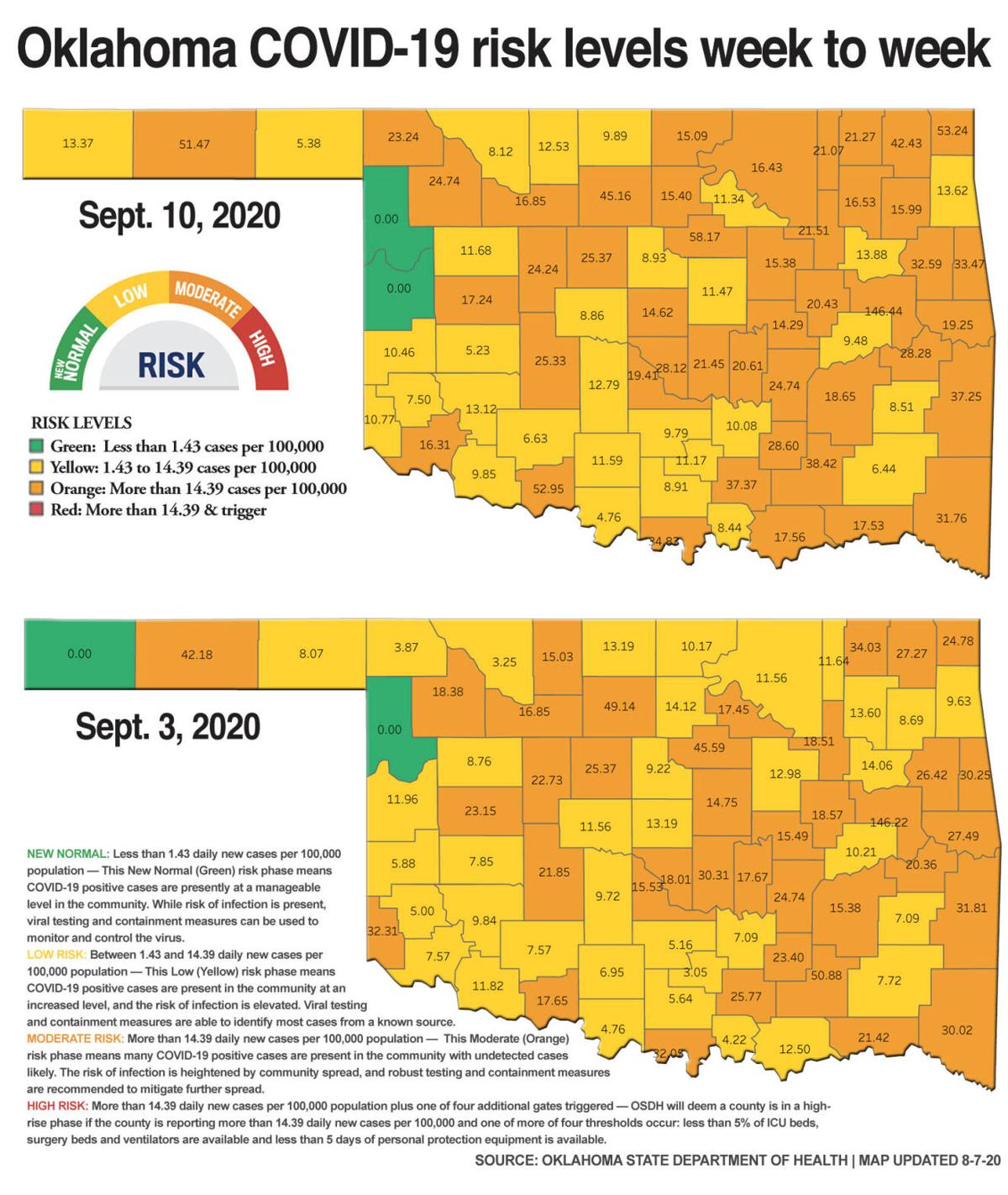 ENID, Okla. — Garfield County remained in the moderate, or "orange," category for COVID-19 risk, according to the state Health Department, keeping many local students in classrooms, but one school in the Enid district has transitioned to a distance/virtual learning platform because of virus' spread.

Adams Elementary School will begin distance learning on Monday until at least Sept. 24, according to Enid Public Schools. A person at the school who "had contact with almost all students on the campus earlier this week" has tested positive for COVID-19, according to district officials.

Students were sent home Friday with all personal belongings and a device to complete distance learning.

No other schools in the district will be moving to distance/virtual learning at this time.

Average new daily cases per 100,000 in Garfield County fell slightly from 49.14 reported Sept. 8 to 45.16 on Friday, according to Oklahoma State Department of Health. The county is one of 45 marked in the moderate category, which gained another seven counties this week. Blaine, Kingfisher, Major and Woodward counties also remained in moderate risk.

There are 30 counties in the low, or "yellow," risk, including Grant, Woods and Alfalfa, the latter of which was in the moderate category last week, according to OSDH data. Ellis and Roger Mills counties in far western Oklahoma were the only two in the new normal, or "green," risk. There were no counties in the high, or "red," risk.

The moderate, or "orange," risk means Enid and Chisholm public schools, and other school districts adhering to the state's weekly risk assessment, will continue to meet in-person, based on guidelines adopted by their respective school boards.

Should the county reach more than 50 average new cases per day — or enter the “red alert” — those districts will switch to virtual classes.

Enid High School has the most people in positive-test isolation at six, five students and one staff member, and in close-contact quarantine at 81, 79 students and two staff.

Coolidge and Monroe elementary schools each have one class quarantined.

Pioneer-Pleasant Vale Public Schools reported one high school student has tested positive for COVID-19. However, no secondary students were in class last week, and the affected student also was not in class this week, the district said in a letter to parents, so the school will remain open.

Statewide, there was an increase of 942 COVID-19 cases, and 12 additional deaths, including that of a Garfield County woman in the 65 and older age group, were announced by the Oklahoma State Department of Health on Friday. The OSDH did reduce the death total related to COVID-19 by one after learning the residence of a woman among the deaths announced Thursday was in Kansas rather than Garfield County as originally believed, according to the OSDH.

In addition to the Garfield County death, 11 others reported Friday were in the 65 and older age group: three women and one man from LeFlore County, three men from Rogers County, two men from Oklahoma County, a McClain County man and a Tulsa County woman. The death of a Kay County man in the 50-64 age group also was announced.

Cases in Garfield County increased Friday by 29 for a total of 1,256, with 282 of those active and 958 recovered, according to OSDH data. There have been 16 deaths in the county, all in Enid. The city increased its numbers by 28 for a total of 1,184 cases, with 266, a single-day decrease of 18, of those active. There have been 902 who have recovered, according to OSDH

Statewide, there have been 5,369 Oklahomans hospitalized, a single-day increase of 51, according to the OSDH Friday. Of those, 499 who have or were suspected of having the virus were in hospitals, a decrease of 10, as of OSDH's Friday evening Executive Report, with 186 of those in intensive care, a decrease of 22.

In Enid, St. Mary's Regional Medical Center was treating 10 patients who had the virus as of Friday. Integris Bass Baptist Health Center had 11 COVID-19-positive inpatients. There were 25 hospitalizations of patients who had  or were suspected of having the virus in the Northwest region of Oklahoma, according to the Executive Report.

Other Northwest Oklahoma county case increases on Friday were five in Noble, four in Major, three in Blaine, two in Grant and one in Kingfisher. Woodward County saw a reduction of two cases. Case increases in cities and towns included three in Watonga and one each in Ames, Cleo Springs, Kingfisher, Nash, Okarche, Ringwood and Seiling according to OSDH.

Of those Oklahomans testing positive, 35,795 have been women and 31,797 have been men. There were 50 listed as unknown gender, according to OSDH data on Friday.

Data shows deaths in 64 of Oklahoma's 77 counties, with 173 in Oklahoma County; 144 in Tulsa County; 67 in Cleveland County; 45 in Rogers County; 40 in Washington County; 31 in McCurtain County; 25 in Creek County; 23 in Wagoner County; 22 in Delaware County; 20 in Caddo County; 19 in Pittsburg County; 18 in Muskogee County; 16 each in Garfield and LeFlore counties; 13 each in Canadian, Kay and Osage counties; 12 each in Comanche County; 10 each in Adair and Mayes counties; nine each in Jackson, Lincoln and Pottawatomie counties; eight each in Carter, Greer and Sequoyah counties; seven each in Cherokee, Grady and Texas counties; five each in McClain, Okmulgee, Payne and Seminole counties; four each in Garvin, Haskell, Hughes, McIntosh, Ottawa and Stephens counties; three each in Bryan, Johnston, Okfuskee, Pawnee and Pontotoc counties; two each in Choctaw, Cotton, Kingfisher, Kiowa, Latimer, Noble and Nowata counties; and one each in Atoka, Beckham, Blaine, Craig, Dewey, Logan, Love, Major, Marshall, Murray, Pushmataha, Roger Mills and Tillman counties.

In Enid, there have been 635 cases, with 490 recovered and seven deaths from the 73701 ZIP code, primarily the eastern half of the city, and 543 cases, with 406 recovered and nine deaths from 73703, or the western half, according to OSDH data on Friday. There also has been one recovered case in the 73705 ZIP code, which is listed as Vance Air Force Base at https://www.unitedstateszipcodes.org/.