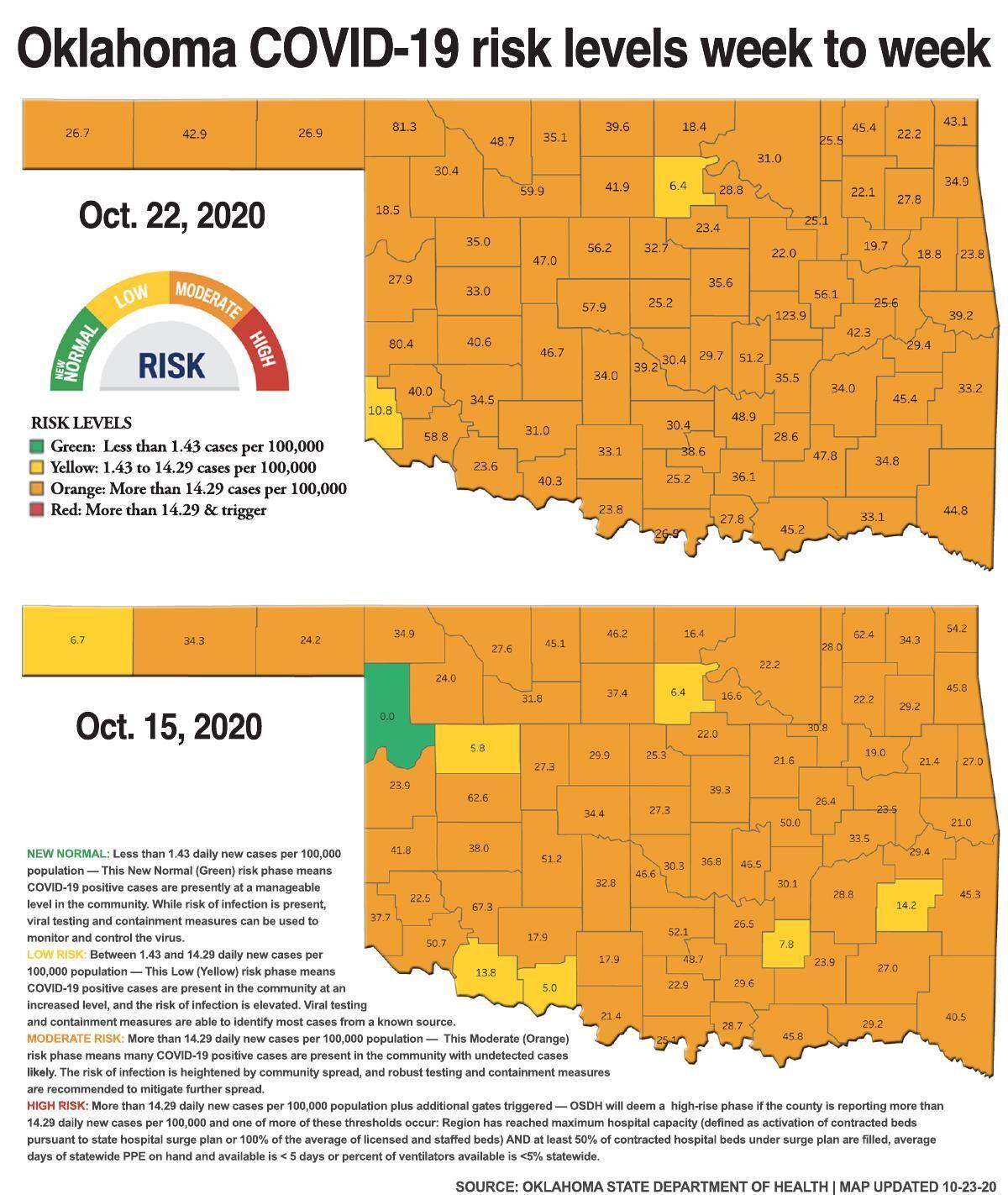 ENID, Okla. — Garfield County and much of the state remained in the orange, or moderate, risk alert for COVID-19 as designated by the Oklahoma State Department of Health.

The county showed an increase in the number of average daily cases reported with 41.9 from Oct. 16 to Thursday as compared to 37.4 the prior week of Oct. 9-15, OSDH data shows.

Shortly after the OSDH released the average, Enid Public Schools announced it would maintain its in-person instruction. Both Enid and Chisholm districts in Garfield County have stated if the average daily cases are more than 50 per 100,000 in a given week it will turn to distance learning. 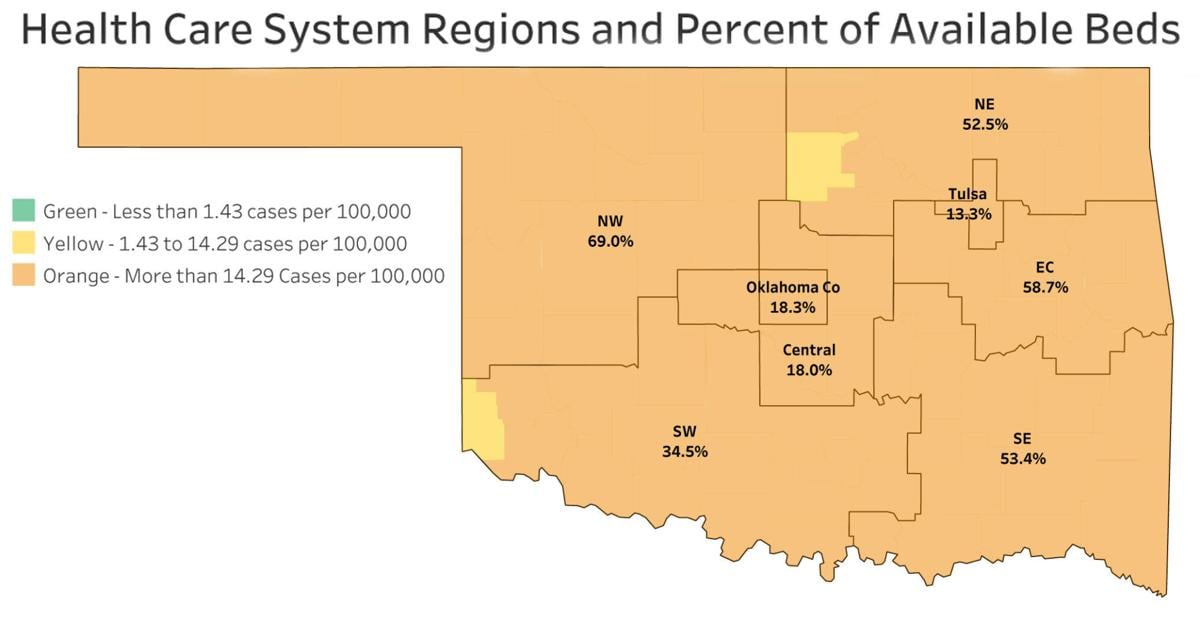 Seventy-five of Oklahoma's 77 counties were in the moderate risk, with Noble County, east of Garfield, and Harmon County, in far southwest Oklahoma, falling into the yellow, or low, risk for COVID-19.

The alert map was part of the daily email COVID-19 update by the OSDH, which also reported a single-day gain of 1,373 new cases and 13 more deaths in the state, including a Kingfisher man in the 65 and older group.

In addition to the Kingfisher County death, there were 10 others in the 65 and older age group: two men and a woman in Oklahoma County, a man and a woman in Tulsa County, women from Canadian, Cleveland and Jackson counties and men from Mayes and Payne counties. There also were deaths reported of a Beckham County man in the 50-64 age group and a Cleveland County man in the 36-49 age group.

Cumulative hospitalizations rose by 95 on Friday to top out at 8,265, according to OSDH. Of those, 924 were in hospitals, a single-day decrease of 32, with 305 in intensive care, a decrease of eight, as of the OSDH Executive Report Friday evening. There were 103 of 999, or 10%, of ICU beds available statewide, based on hospitals surveyed, with a 95% reporting compliance. Medical surgery beds were at 15% availability, according to OSDH.

That same report shows the Northwest region for OSDH with 47 hospitalizations on Friday, a decrease of one over the prior day.

Other Northwest Oklahoma county case increases on Friday were 10 in Kingfisher, four each in Blaine, Grant and Major, two each in Woods and Woodward and one each in Noble. Case increases in Northwest Oklahoma cities and towns included seven in Kingfisher; two each in Alva, Medford, Mooreland, Okarche, Pond Creek, Ringwood and Woodward; one each in Ames, Canton, Drummond, Hennessey, Lahoma, Watonga and Waukomis. Sharon saw a reduction of one case.

There have been 59,276 Oklahoma women and 54,489 men who have tested positive for COVID-19 as of the OSDH report Friday morning. There were 91 listed as unknown gender.

Data shows deaths in 69 of Oklahoma's 77 counties, with 225 in Oklahoma County; 197 in Tulsa County; 89 in Cleveland County; 54 in Rogers County; 41 in Washington County; 38 in McCurtain County; 37 in Creek County; 28 each in Muskogee and Wagoner counties; 27 in Delaware County; 26 in Caddo County; 25 in Garfield County; 22 each in Canadian and LeFlore counties; 20 each in Lincoln and Pittsburg counties; 17 in Comanche County; 16 each in Grady and Kay counties; 14 in Pottawatomie County; 13 each in Jackson, Mayes, Osage and Sequoyah counties; 12 in Payne County; 11 each in Adair, Beckham and Bryan counties; 10 each in Carter and Texas counties; nine each in McClain, McIntosh and Ottawa counties; eight each in Cherokee, Greer, Okmulgee and Stephens counties; six each in Garvin, Okfuskee and Seminole counties; five each in Haskell, Pawnee, Pushmataha and Woodward counties; four each in Hughes, Johnston, Nowata, Pontotoc and Roger Mills counties; three each in Cotton, Custer, Kingfisher, Noble, and Tillman counties; two each in Choctaw, Craig, Kiowa, Latimer, Logan, Major, Marshall and Murray; and one each in Atoka, Beaver, Blaine, Dewey, Grant, Harper and Love counties.

The services celebrating and honoring the life of Gerry Kistler, Enid, will be held privately in the Perry Cemetery. Condolences and special memories may be shared with the family online at www.Brown-Cummings.com.