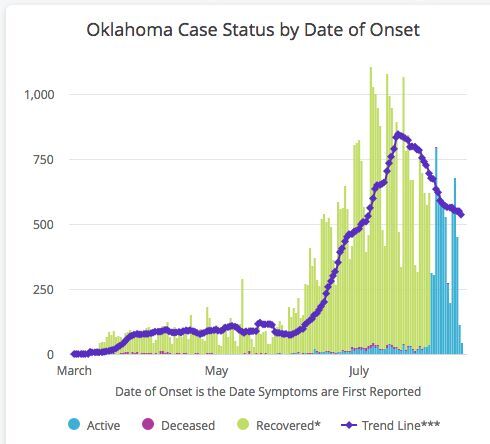 ENID, Okla. — Oklahoma State Department of Health has confirmed a death associated with COVID-19 for the third consecutive day in Enid. There also were an additional 901 cases of the virus reported statewide, 16 of those in Garfield County.

The OSDH Weekly Epidemiology report shows cases and deaths went down overall this past week, Aug. 7-13, 2020, compared to the week prior. Health officials reported Friday, Aug. 14, the average number of COVID-19 cases in the last two weeks had fallen from nearly 1,100 to less than 700. 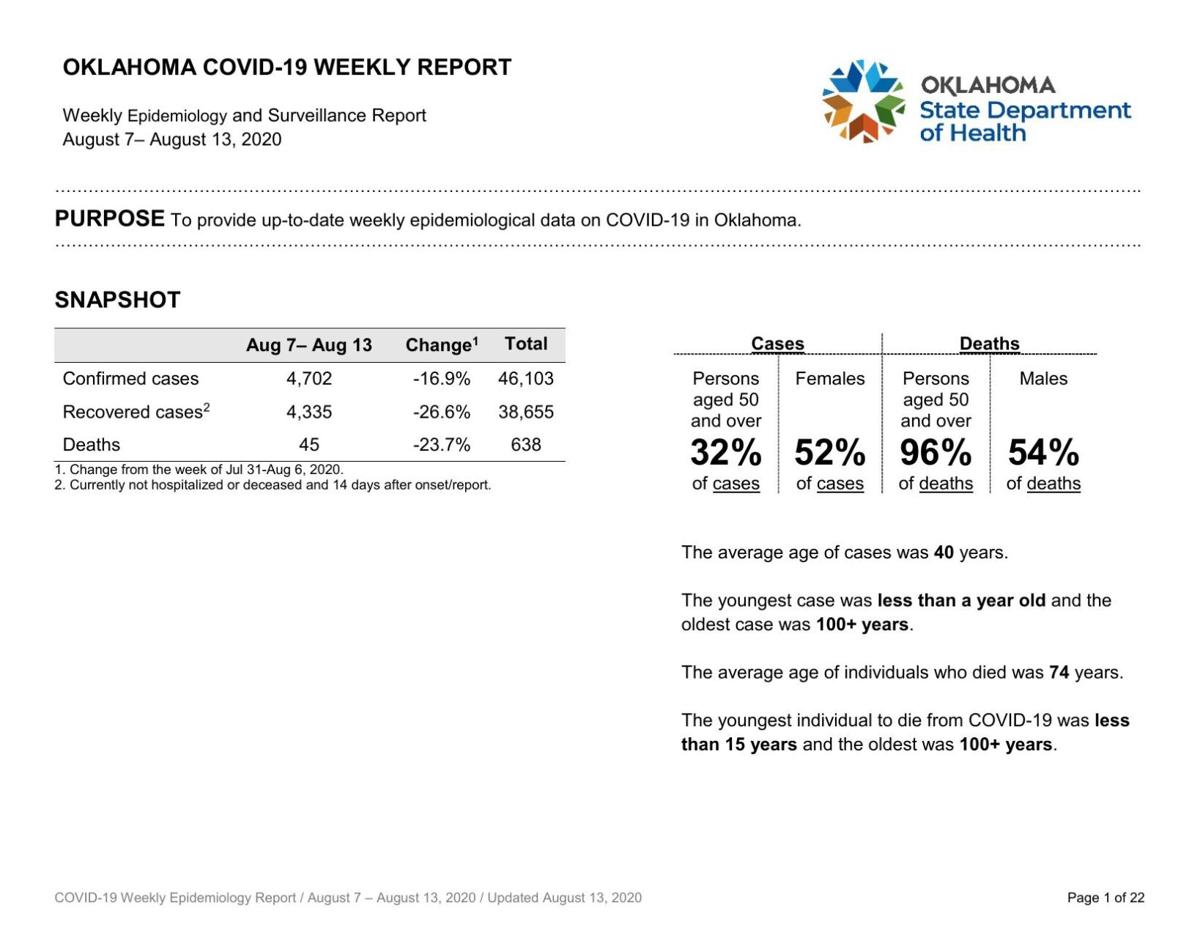 There were 45 deaths reported this past week compared to 56 the prior period, a 23.7% reduction, according to OSDH. Oklahoma currently ranks 31st in the number of total reported COVID-19 cases in the U.S. The state ranked 32nd the prior week. Oklahoma is 27th in the cumulative incidence (per 100,000 persons) of reported cases in the U.S.

The average number of confirmed cases in Oklahoma was back up both Friday and Saturday, according to OSDH data, and Garfield County was upgraded from low to moderate risk for the virus, according to information provided by the Health Department.

There were 10 deaths in the 65 and older age range, two in the 50-64 age range and one in the 36-49 age range reported Saturday, according to OSDH. Seven were men and six were women. OSDH does not provide information of age and gender per county on the weekends. There were five deaths reported from Oklahoma County and one each in Atoka, Bryan, Cleveland, Comanche, Garfield, Mayes, McIntosh and Rogers counties.

In Garfield County, the death was from the 73703 Zip Code, primary the western half of the city of Enid, according to OSDH data. There has now been four deaths from that region of the city and four from the eastern side, or 73701 Zip Code.

Other case increases in Northwest Oklahoma counties included four in Kingfisher, two each in Noble and Woodward and one in Major. Cities and towns seeing an increase in confirmed cases included five in Enid, two each in Kingfisher and Mooreland and one each in Ames, Dover, Drummond and Hennessey. There were case reductions by one each in Okarche and Woodward, according to OSDH.

Of those testing positive, 24,993 have been female and 22,778 have been male. There were 27 listed as "unknown" gender, according to OSDH data on Saturday.

Data shows deaths in 56 of Oklahoma's 77 counties, with 129 in Oklahoma County; 113 in Tulsa County; 57 in Cleveland County; 39 in Washington County; 28 in McCurtain County; 23 in Wagoner County; 21 in Rogers County; 20 in Delaware County; 18 in Caddo County; 16 in Muskogee County; 15 in Creek County; 12 in Osage County; 11 in Comanche and Kay counties; nine each in Canadian and Pottawatomie counties; eight each in Garfield, Greer and Mayes counties; seven each in Grady, Jackson and Texas counties; six in Adair County; five each in Carter and Seminole counties; four each in Garvin, McClain, Payne, Pittsburg and Sequoyah counties; three each in Lincoln, Ottawa, Pawnee, Okmulgee and Stephens counties; two each in Bryan, Cherokee, Cotton, Hughes, Latimer, McIntosh, Noble and Pontotoc counties; and one each in Atoka, Beckham, Choctaw, Craig, Haskell, Kiowa, Leflore, Logan, Major, Marshall, Nowata, Okfuskee, Roger Mills and Tillman counties.