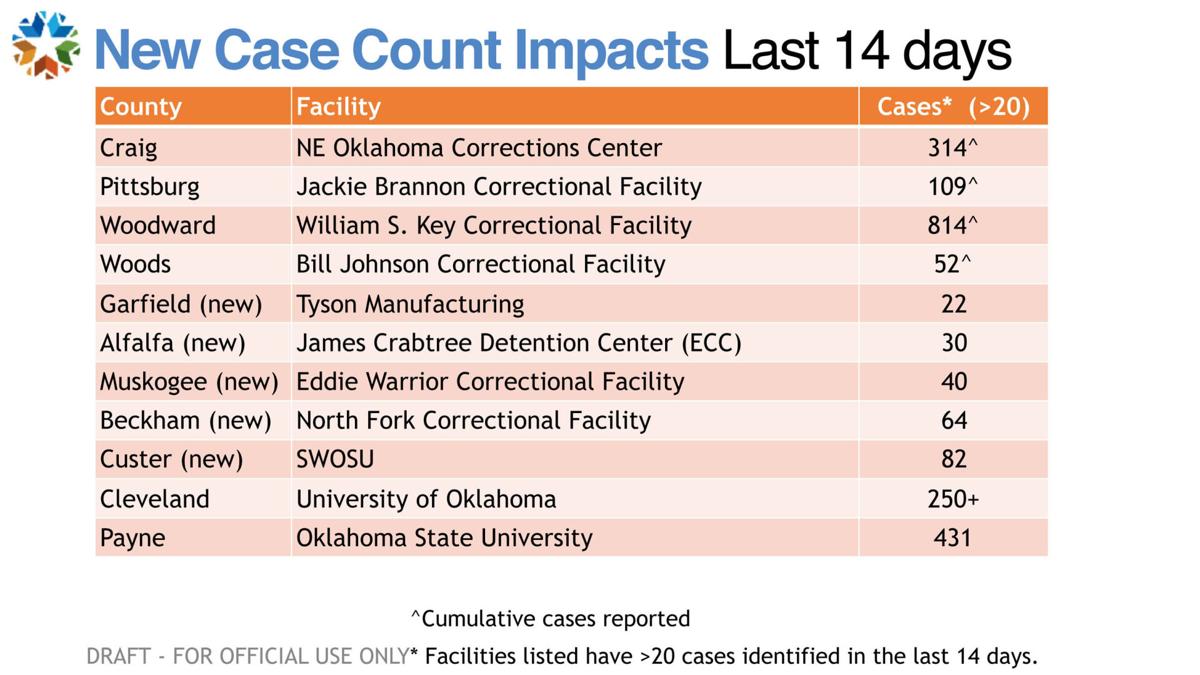 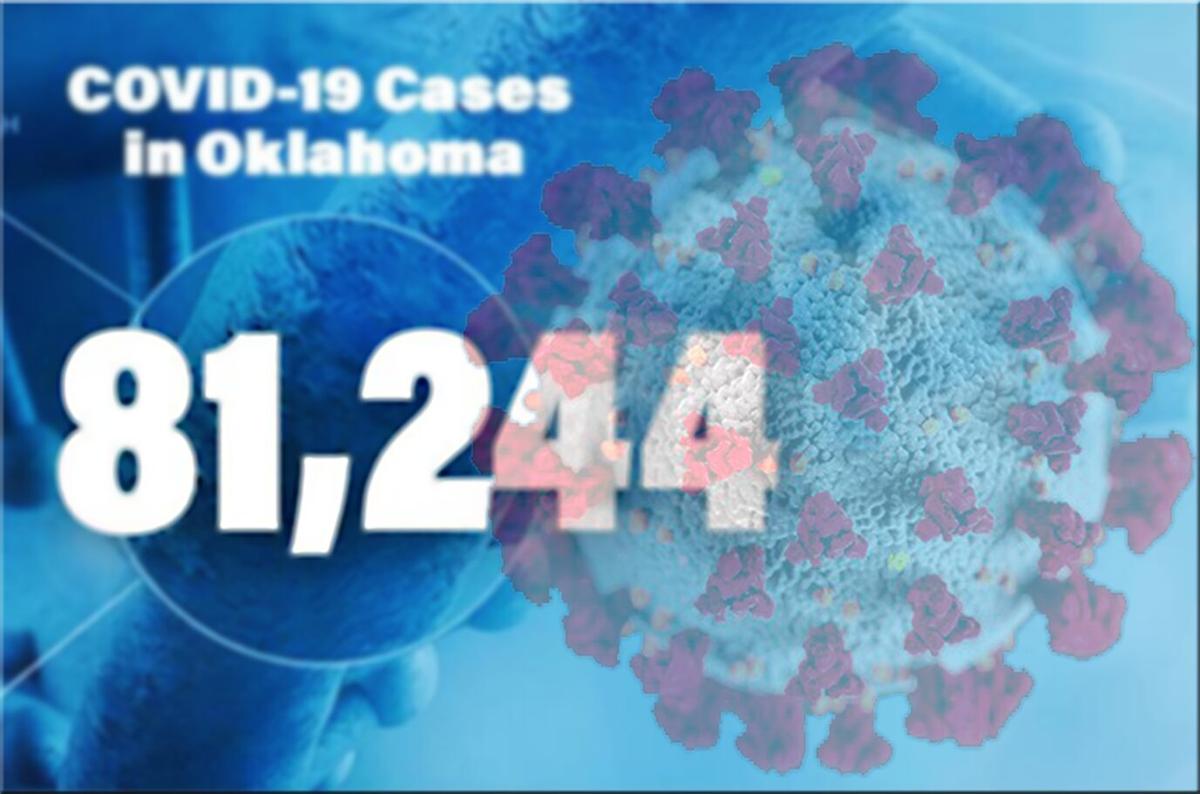 There were 22 cases listed in the last 14 days at Tyson, according to OSDH. Calls and emails to Tyson seeking comment on the situation were not returned Thursday. According to information provided earlier by Tyson, the company employed more than 1,400 people at its Enid facilities in mid-2019. Those include plants at 54th, Enterprise and Willow and a Pine Street facility.

Crabtree is one of three correctional facilities of concern in Northwest Oklahoma, but Thursday's OSDH report citing 30 cases at Crabtree is the first indication of that many cases at the Helena prison. Even as late as Thursday afternoon, the Department of Corrections website had no active cases listed at the facility.

Justin Wolf, DOC spokesman, said the discrepancy in the numbers is related to the timing of reporting. He said DOC receives its results from OSDH, sometimes after DOC updates its website in the morning. OSDH provides information later in the day. According to DOC figures, there are three inmates at Crabtree who have recovered from COVID-19. Crabtree is a medium-security prison that can house up to 1,175 male inmates in cells.

In addition to the impact report, the OSDH daily update announced 11 more deaths, including an Enid resident, and 1,083 more cases associated with the coronavirus.

Deaths announced Wednesday included 10 men and one woman, nine of whom were in the 65 and older age group, with one each from the 30-49 and 50-64 age groups. In addition to the one from Garfield County, two each were from Cleveland, Oklahoma and Okmulgee counties and there was one each from Comanche, Delaware, Nowata and Tulsa counties. The OSDH was late with it reporting due to "technical issues" Thursday and did not indicate age and gender per county of residence.

There have been 19 deaths in Garfield County, all in Enid, with 10 residents from the 73703 Zip code, primarily western Enid, and nine from the 73701 Zip code, or the eastern half of the city, according to OSDH data.

Cases in Garfield County rose by 28 on Thursday, with 322 of 1,580 overall cases active and 1,239 who have recovered, according to the OSDH. Enid rose by 33 cases to top out at 1,488, with 302 active and 1,168 recovered. OSDH officials have said in the past that cities can rise by more than counties as officials catch up on counts and address changes are noted.

Other Northwest Oklahoma county case increases on Thursday were seven each in Noble and Major; five each in Grant, Kingfisher and Woodward; four in Woods; and three in Blaine. Case increases in cities and towns included four in Kingfisher; three each in Fairview and Medford; two each in Alva, Billings, Pond Creek, Waynoka and Woodward; and one each in Ames, Fairmont, Fort Supply, Hennessy, Lahoma and Meno.

The latest White House Coronavirus Task Force report lists Oklahoma in red again, with 175 new cases per 100,000 population last week, ranking the state sixth in the nation for new cases. The national average is 86 per 100,000.

The report also shows Oklahoma has the third-highest rate in the country for test positivity, with a rate between 8% and 10%.

The report puts Garfield, Woodward and Alfalfa counties in a red zone, with Kingfisher County in orange and Blaine County in yellow. Using its own system, OSDH currently classifies Garfield County in orange, or moderate, risk level. The state updates its daily case averages and color codes on Friday.

Statewide the overall number of hospitalizations was reported by OSDH at 6,130, a single-day increase of 73. Of those, 590 were hospitalized as of Thursday evening, a decrease of three, with 220 in intensive care, a decrease of seven, according to the OSDH Executive Report.

There were 36 Oklahomans hospitalized who had tested positive for COVID-19 in the Northwest region of Oklahoma, according to the same report.

There have been 42,370 Oklahoman women who have tested positive and 38,838 men. There were 36 listed as unknown gender, according to OSDH data on Thursday.

Data shows deaths in 66 of Oklahoma's 77 counties, with 188 in Oklahoma County; 156 in Tulsa County; 70 in Cleveland County; 49 in Rogers County; 40 in Washington County; 34 in McCurtain County; 33 in Creek County; 26 in Wagoner County; 25 in Delaware County; 21 in Muskogee; 20 in Caddo County; 19 in Garfield and Pittsburg counties; 17 each in Canadian and LeFlore counties; 13 each in Comanche, Kay and Osage counties; 11 in Grady, Mayes and Sequoyah counties; 10 each in Adair, Jackson, Lincoln and Pottawatomie counties; eight each in Carter, Cherokee, Greer and Texas counties; seven in McClain and Okmulgee counties; six each in Payne and Seminole counties; five each in McIntosh and Stephens counties; four each in Bryan, Garvin, Haskell, Hughes, Johnston, Nowata, Okfuskee and Ottawa counties; three each in Cotton, Pawnee and Pontotoc counties; two each in Choctaw, Kingfisher, Kiowa, Latimer, Noble and Tillman counties; and one each in Atoka, Beckham, Blaine, Craig, Dewey, Harper, Logan, Love, Major, Marshall, Murray, Pushmataha, Roger Mills and Woodward counties.