ENID, Okla. — Oklahoma has become a sea of orange, as 75% of the state's 77 counties are in moderate risk for COVID-19, according to Oklahoma State Department of Health, which also announced 12 more deaths, including one in Enid, and 1,276 more cases associated with the virus on Friday.

Garfield County remained in the moderate, or orange, risk for COVID-19, meaning both Enid and Chisholm public schools will continue on-campus classes next week. The districts plans are to move to distance learning only if the number of average daily cases per 100,000 population top 50. 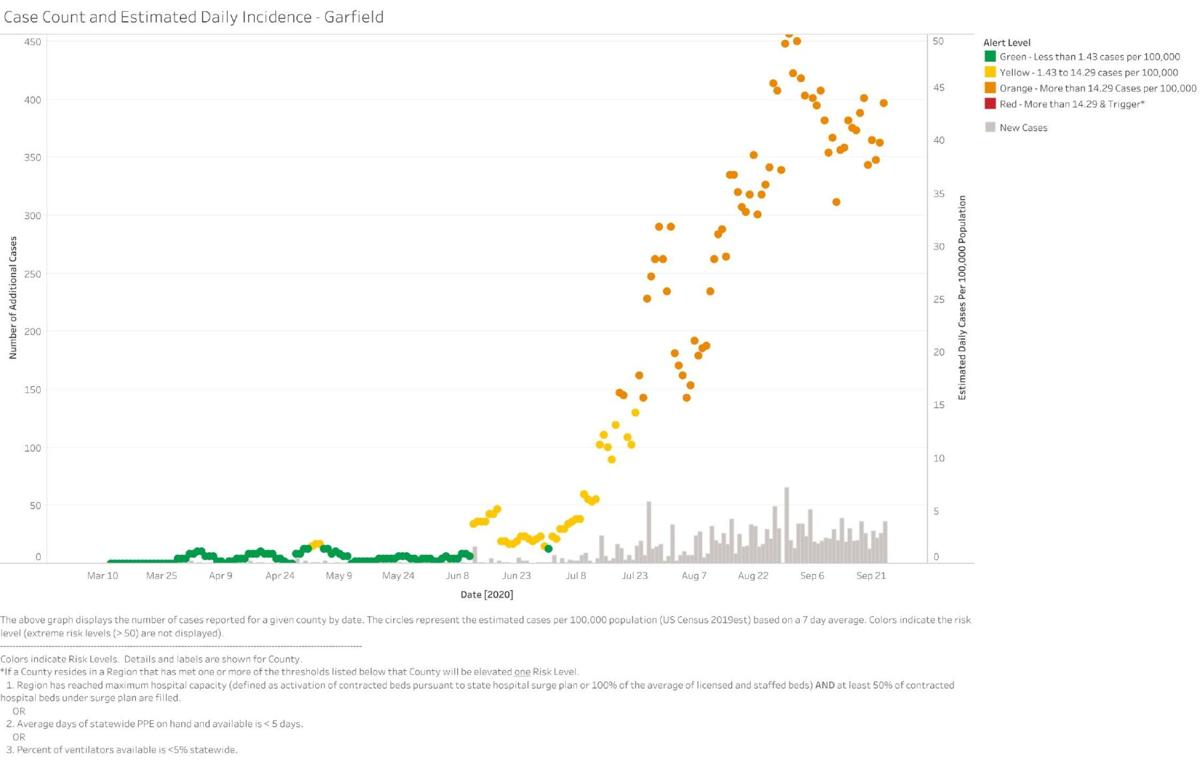 This past week, from Friday, Sept. 18, to Thursday, there were 43.5 average daily cases in Garfield County, an increase from 38.37 the prior week, according to OSDH.

"Families should prepare for the possibility in the future of our entire district having to move to distance/virtual learning for two weeks (or more) if cases rise in our county," according to a statement on the Enid Public Schools website. 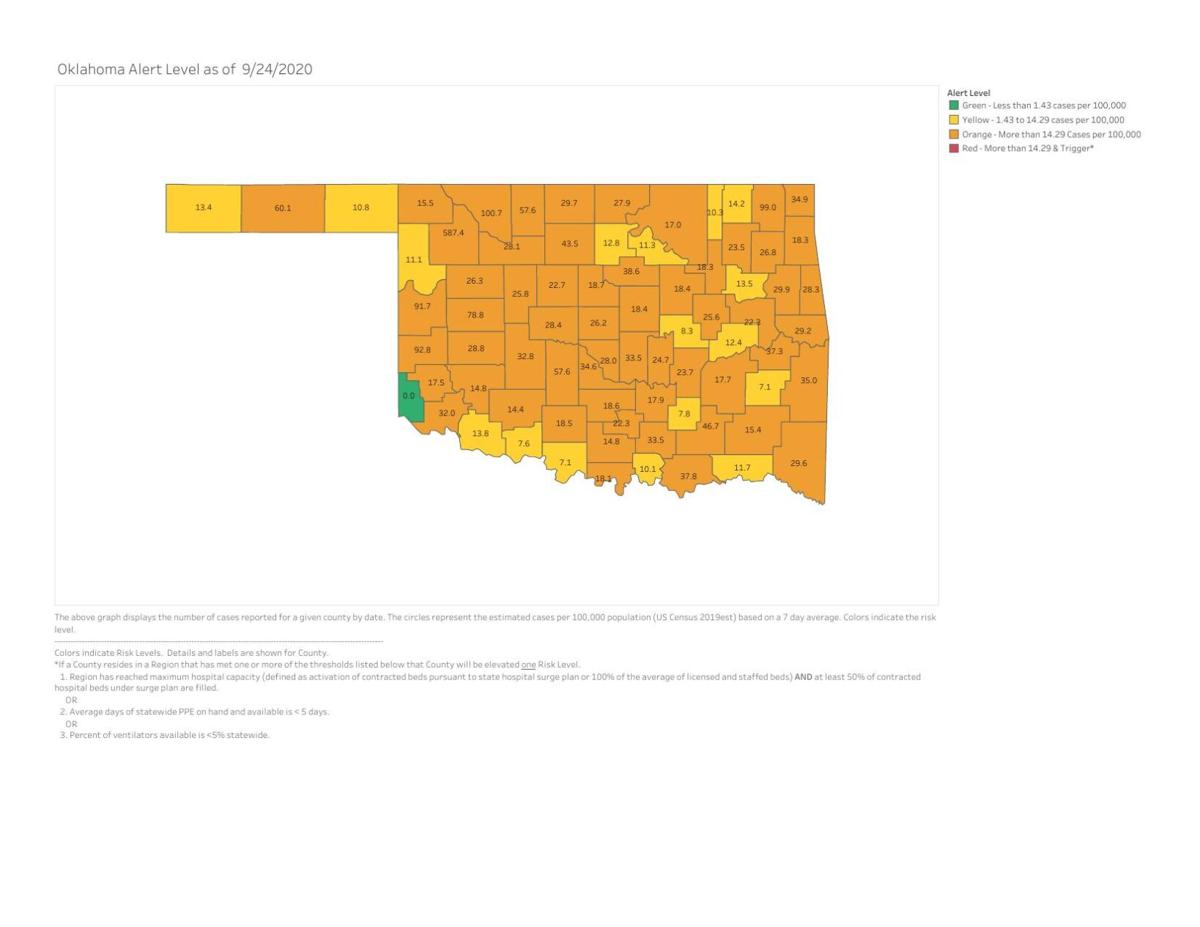 Outbreaks of cases in Northwest Oklahoma prisons caused the average cases to rise to 57.6 in Alfafa County, 100.7 in Woods County and 587.4 in Woodward County, where more than 800 cases have been confirmed by OSDH in the past week at William S. Key Correctional Center.

There have been a total of 993 Oklahomans who have died. All 12 announced Friday were in the 65 and older age group, including an Enid man who became the 20th Enid death either caused by COVID-19 or complications from the virus, according to the OSDH.

In addition to Garfield County, other deaths were two women and one man in Tulsa County, one man and one woman each from Oklahoma and Ottawa counties, women from Garvin, Muskogee and Pushmataha counties and a Marshall County man.

The OSDH had listed only one death in Woodward County, an inmate from William Key whose death was announced Tuesday, as of Friday morning in its daily report and website update, but Friday evening there were two deaths confirmed at Woodward Skilled Nursing and Therapy in the department's Executive Report. No other information about the deaths was available.

Other Northwest Oklahoma county case increases on Friday were 22 in Woodward, five in Blaine, four in Kingfisher, three each in Major and Woods, two in Noble and one in Alfalfa. Case increases in cities and towns included five in Woodward; four in Okeene; two each in Alva, Hennessey, Ringwood and Seiling; and one each in Cherokee, Cleo Springs, Kingfisher, Longdale, Waukomis and Waynoka. Fort Supply saw a reduction of one case.

Statewide the overall number of hospitalizations was reported by OSDH at 6,192, an increase of 62, with 579 of those hospitalized as of Friday evening, a single-day decrease of 11, and 223 in intensive care, an increase of three, according to the OSDH Executive Report.

There have been 43,046 Oklahoman women who have tested positive and 39,440 men. There were 34 listed as unknown gender, according to OSDH data on Friday.

Data shows deaths in 66 of Oklahoma's 77 counties, with 190 in Oklahoma County; 159 in Tulsa County; 70 in Cleveland County; 49 in Rogers County; 40 in Washington County; 34 in McCurtain County; 33 in Creek County; 26 in Wagoner County; 25 in Delaware County; 22 in Muskogee County; 20 each in Caddo and Garfield counties; 19 in Pittsburg County; 17 each in Canadian and LeFlore counties; 13 each in Comanche, Kay and Osage counties; 11 in Grady, Mayes and Sequoyah counties; 10 each in Adair, Jackson, Lincoln and Pottawatomie counties; eight each in Carter, Cherokee, Greer and Texas counties; seven each in McClain and Okmulgee counties; six each in Ottawa, Payne and Seminole counties; five each in Garvin, McIntosh and Stephens counties; four each in Bryan, Haskell, Hughes, Johnston, Nowata and Okfuskee counties; three each in Cotton, Pawnee and Pontotoc counties; two each in Choctaw, Kingfisher, Kiowa, Latimer, Marshall, Noble, Pushmataha and Tillman counties; and one each in Atoka, Beckham, Blaine, Craig, Dewey, Harper, Logan, Love, Major, Murray, Roger Mills and Woodward counties.

In Enid, there have been 818 cases, with 684 recovered and 10 deaths from the 73701 ZIP code, primarily the eastern half of the city, and 676 cases, with 534 recovered and 10 deaths from 73703, or the western half, according to OSDH data on Friday. There also has been one recovered case in the 73705 ZIP code, which is listed as Vance Air Force Base at https://www.unitedstateszipcodes.org/.

This story is developing and will be updated.