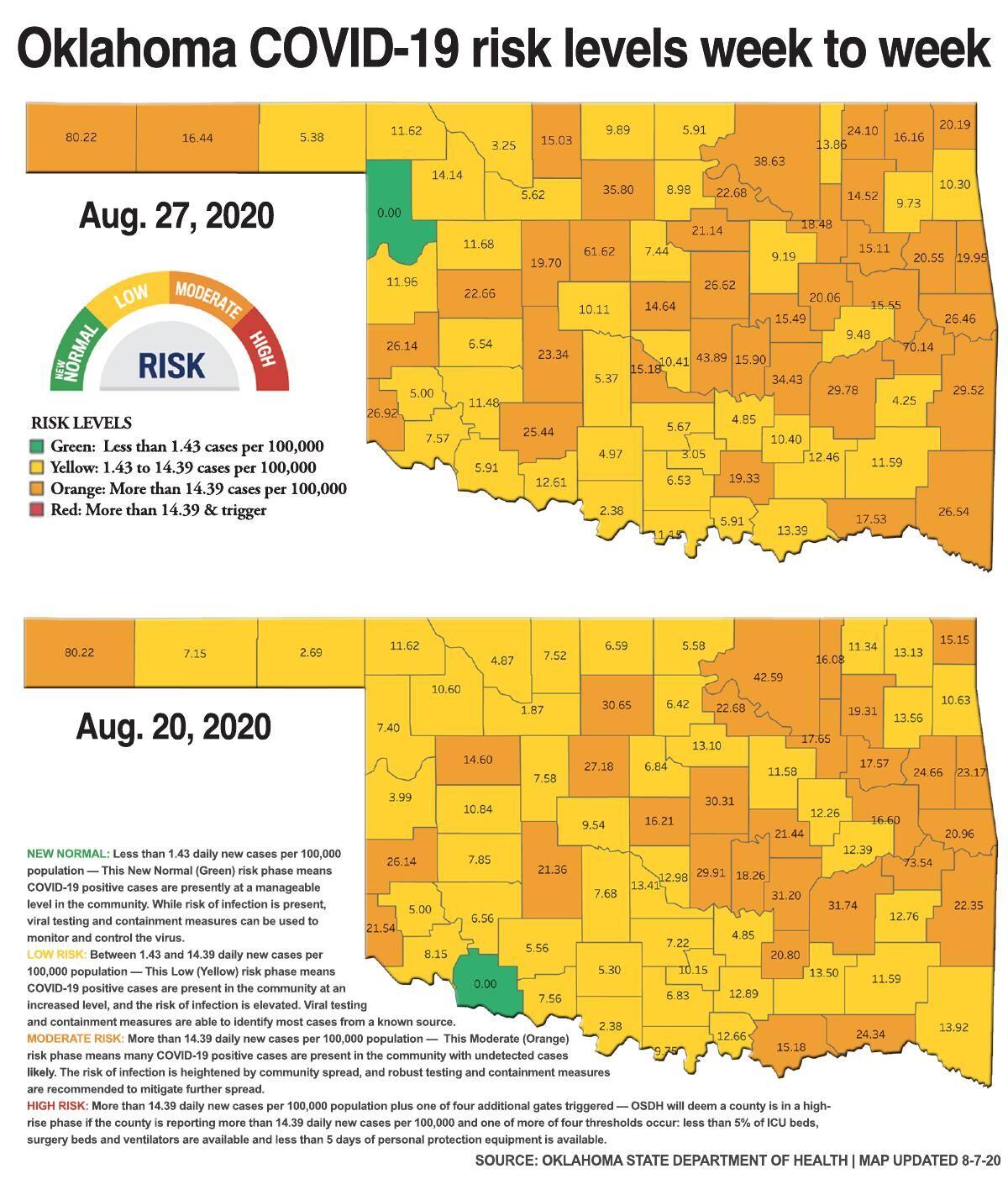 ENID, Okla. — Oklahoma saw another 1,093 cases of COVID-19 and 11 more deaths, including an Enid resident, as confirmed cases rose by nearly 7% in a week-to-week comparison, according to the Oklahoma State Department of Health.

In addition to the Garfield County resident, there were nine other deaths in the 65 and older age range and one death in the 36-49 age range announced Saturday, according to OSDH. Of those, seven were women and four were men. Three were in Tulsa County, two were in Adair County and one each was in Cherokee, Delaware, Jackson, Oklahoma and Rogers counties. OSDH does not provide gender and age per county resident on the weekends.

"Oklahoma’s current trend with new positive cases continues to reflect community transmission, which can be reduced by keeping 6 feet of physical distance from others, wearing face coverings when around individuals from outside the household, avoiding touching your face, and regular hand-washing," according to an OSDH email.

The state continues to promote testing, with or without symptoms, and its contact tracing efforts.

Northwest Oklahoma county case increases on Saturday were 37 in Garfield, eight in Woodward, five in Kingfisher, three each in Blaine and Major and one each in Grant and Noble counties. Case increases in cities and towns included 35 in Enid, six in Woodward, four in Hennessey, two each in Mooreland and Ringwood and one each in Fairview, Kingfisher, Kremlin, Medford, Okeene, Ringwood and Watonga.

There have been 4,719 Oklahomans hospitalized, with 570 currently in hospitals who have or are suspected of having the virus, and 214 in intensive care, according to OSDH's Executive Report Friday evening.

Data shows deaths in 62 of Oklahoma's 77 counties, with 154 in Oklahoma County; 132 in Tulsa County; 63 in Cleveland County; 41 in Rogers County; 39 in Washington County; 29 in McCurtain County; 23 in Wagoner County; 21 each in Creek and Delaware counties; 20 in Caddo County; 16 in Muskogee County; 15 in Pittsburg County; 12 in Kay, Garfield and Osage counties; 11 in Canadian and Comanche counties; nine each in Jackson, Mayes and Pottawatomie counties; eight each in Adair, Greer, Lincoln and Sequoyah counties; seven each in Grady and Texas counties; six each in Carter and Cherokee counties; five each in Leflore, Payne and Seminole counties; four each in Garvin, Haskell, McClain, McIntosh, Okmulgee, Ottawa and Stephens counties; three each in Bryan, Hughes, Okfuskee, Pawnee and Pontotoc counties; two each in Cotton, Latimer and Noble counties; and one each in Atoka, Beckham, Blaine, Choctaw, Craig, Johnston, Kiowa, Kingfisher, Logan, Major, Marshall, Murray, Nowata, Pushmataha, Roger Mills and Tillman counties.

In Enid, there have been 473 cases, with 306 recovered and five deaths from the 73701 ZIP code, primarily the eastern half of the city, and 398 cases, with 266 recovered and seven deaths from 73703, or the western half, according to OSDH data on Saturday. There also has been one recovered case in the 73705 ZIP code, which is listed as Vance Air Force Base at https://www.unitedstateszipcodes.org/.