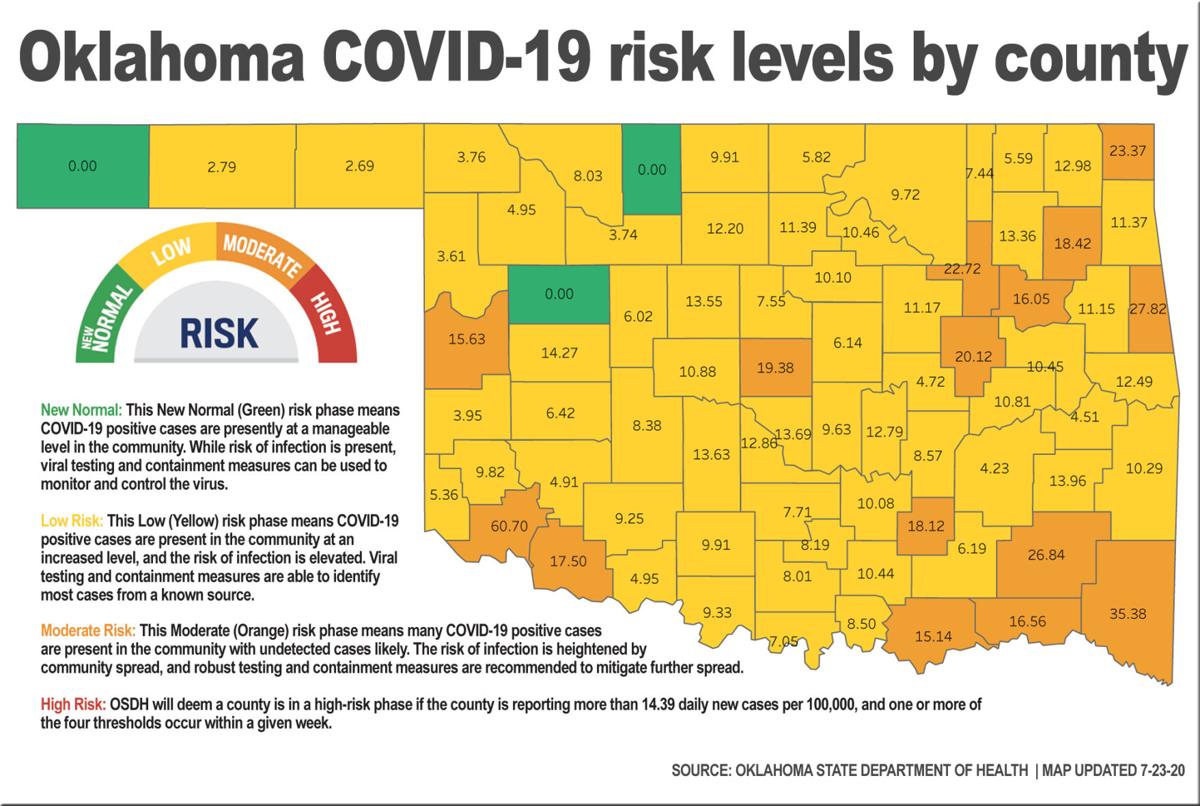 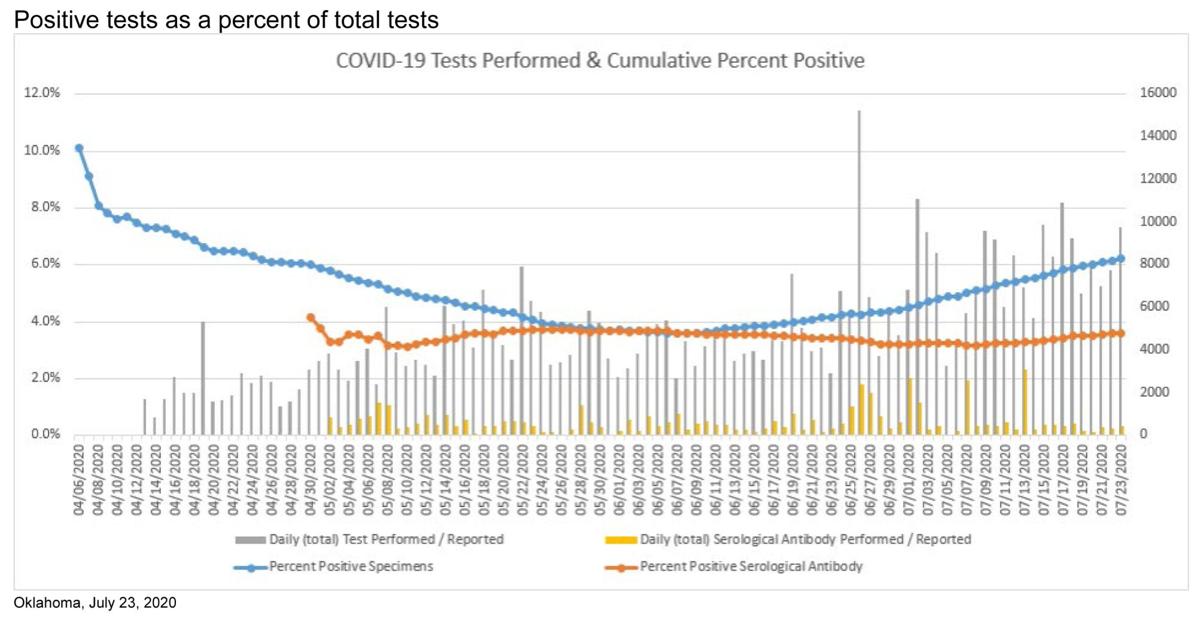 ENID, Okla. — Oklahoma topped 30,000 cases of COVID-19 Saturday, a single-day increase of 965, or 3.3%, with 12 more deaths reported, including one in Garfield County, according to the Health Department.

Overall, the state had a cumulative 30,081 cases of the virus, according to Saturday's Oklahoma State Department of Health report. That number of cases represents less than 1%, or .76, of Oklahoma's population, listed at 3,956,971 in July 2019, according to census.gov.

Oklahomans who have tested positive for COVID-19 and died rose to an overall 496, which is 1.65% of those who contracted the virus in the state.

St. Mary's Regional Medical Center reported a death at its facility on Thursday, but it is not know whether Saturday's OSDH death in the county is the same. Privacy laws prohibit officials from releasing more information.

Deaths in the state reported Saturday included eight in the 65 and older age range, three in the 50-64 age range and one in the 18-35 age range, according to OSDH data. There were nine men and three women who died. In addition to the Garfield County death, there were two each in Creek and Oklahoma counties and one each in Adair, Cleveland, Garvin, McCurtain, Payne, Tulsa and Wagoner counties, according to OSDH data.

Of the total cases in Oklahoma, 5,532 were active and 24,053 have recovered, including 776 since Friday's OSDH report, according to OSDH data on Saturday.

There were five confirmed inpatients who had tested positive for COVID-19 at St. Mary's Regional Medical Center as of Friday, and three inpatients at Integris Bass Baptist Health Center as of Thursday afternoon.

Of those testing positive, 15,522 have been female and 14,509 have been male. There are 50 listed as "unknown" gender, according to OSDH data on Saturday.

Data shows deaths in 49 of Oklahoma's 77 counties, with 90 each in Oklahoma and Tulsa counties; 41 in Cleveland County; 39 in Washington County; 20 each in McCurtain and Wagoner counties; 19 in DelawareCounty; 16 in Muskogee County; 12 each in Caddo, Creek and Rogers counties; 10 in Osage County; nine each in Comanche and Kay counties; seven each in Greer and Texas counties; six each in Grady and Pottawatomie counties; five each in Adair, Mayes and Seminole counties; four each in Canadian, Garvin and McClain counties; three each in Carter, Garfield, Jackson, Pawnee, Payne, Pittsburg and Sequoyah counties; two each in Cotton, Lincoln, Noble, Ottawa and Pontotoc counties; and one each in Bryan, Cherokee, Choctaw, Hughes, Kiowa, Latimer, Leflore, Logan, Major, McIntosh, Nowata, Stephens and Tillman counties.

In Enid, there have been 103 cases, with 62 recovered and two deaths, from the 73701 ZIP code, primarily the eastern half of the city, and 109 cases, with 68 recovered and one death, from 73703, or the western half, according to OSDH data on Saturday. There also has been one recovered case in the 73705 ZIP code, which is listed as Vance Air Force Base at https://www.unitedstateszipcodes.org/.