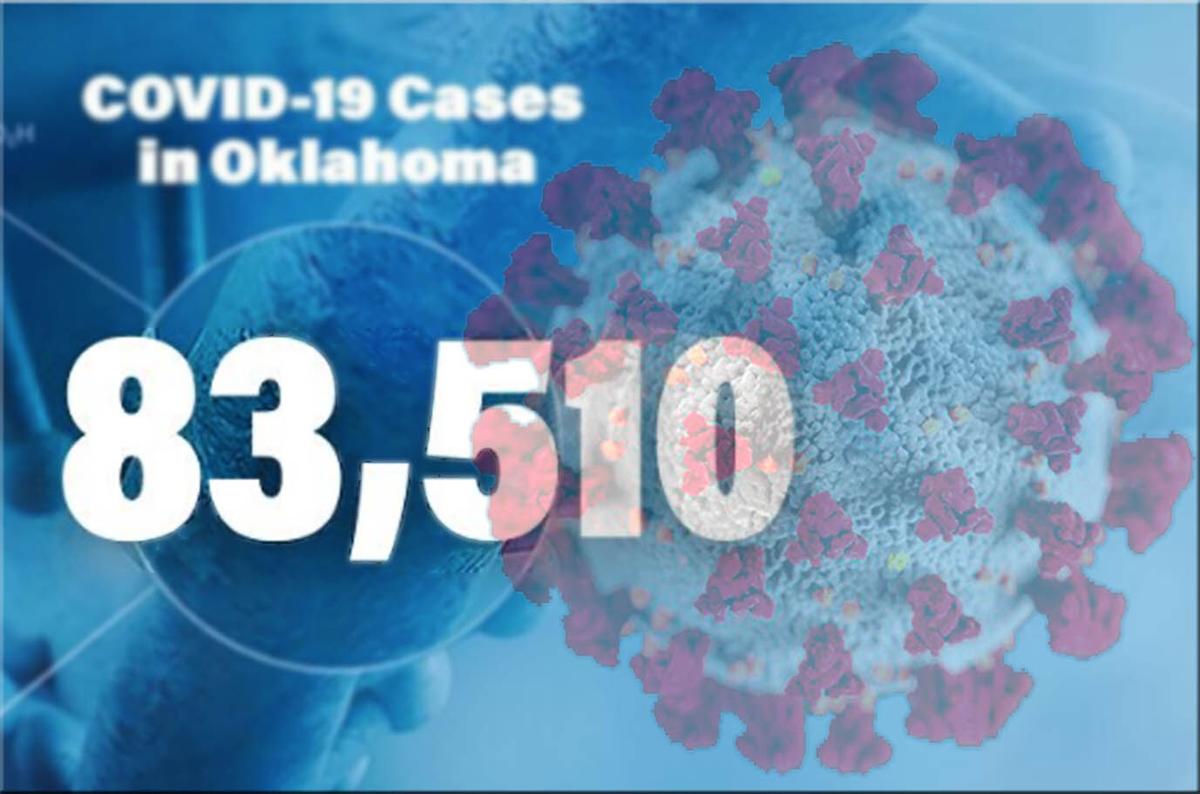 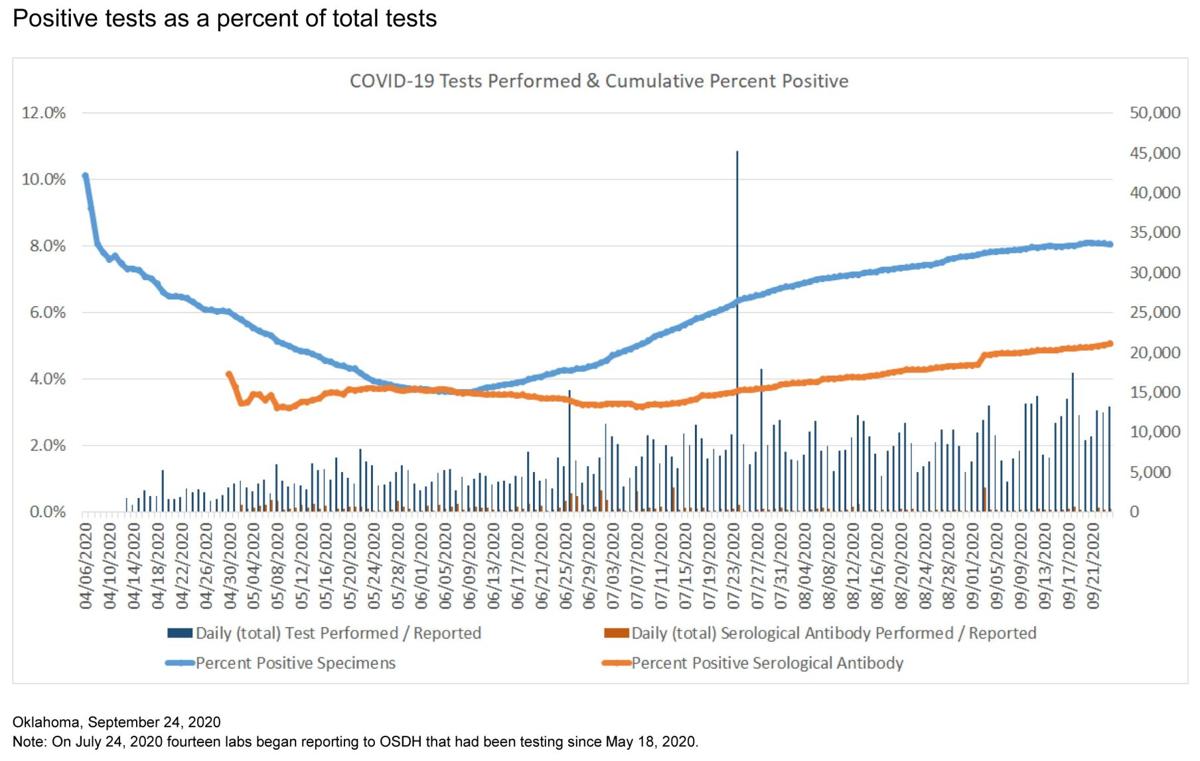 ENID, Okla. — Oklahoma has seen more than 1,000 deaths due to COVID-19 or complications from the virus since it was first confirmed in the state March 6, 2020.

There were 11 deaths, including three in Woodward County, announced Saturday, bringing the total to 1,004, according to the Oklahoma State Department of Health. Another 990 cases also were confirmed.

Deaths reported were eight women and three men, with 10 in the 65 and older age range and one in the 18-35 age range, according to OSDH data.

Woodward County deaths encompassed two at Woodward Skilled Nursing and Therapy and one from Mooreland, according to the OSDH reports. Others were four from Oklahoma County and one each from Caddo, Rogers, Texas and Tulsa counties. OSDH does not list age and gender of the deceased per county on weekends.

There also was a 1.9% increase in recovered cases and 5.6% fewer deaths, with 51 reported Sept. 18-24 compared to 54 the prior week, OSDH data shows. Hospitalizations of those testing positive for COVID-19 continues to rise, with 432 in the past week, according to the weekly report. 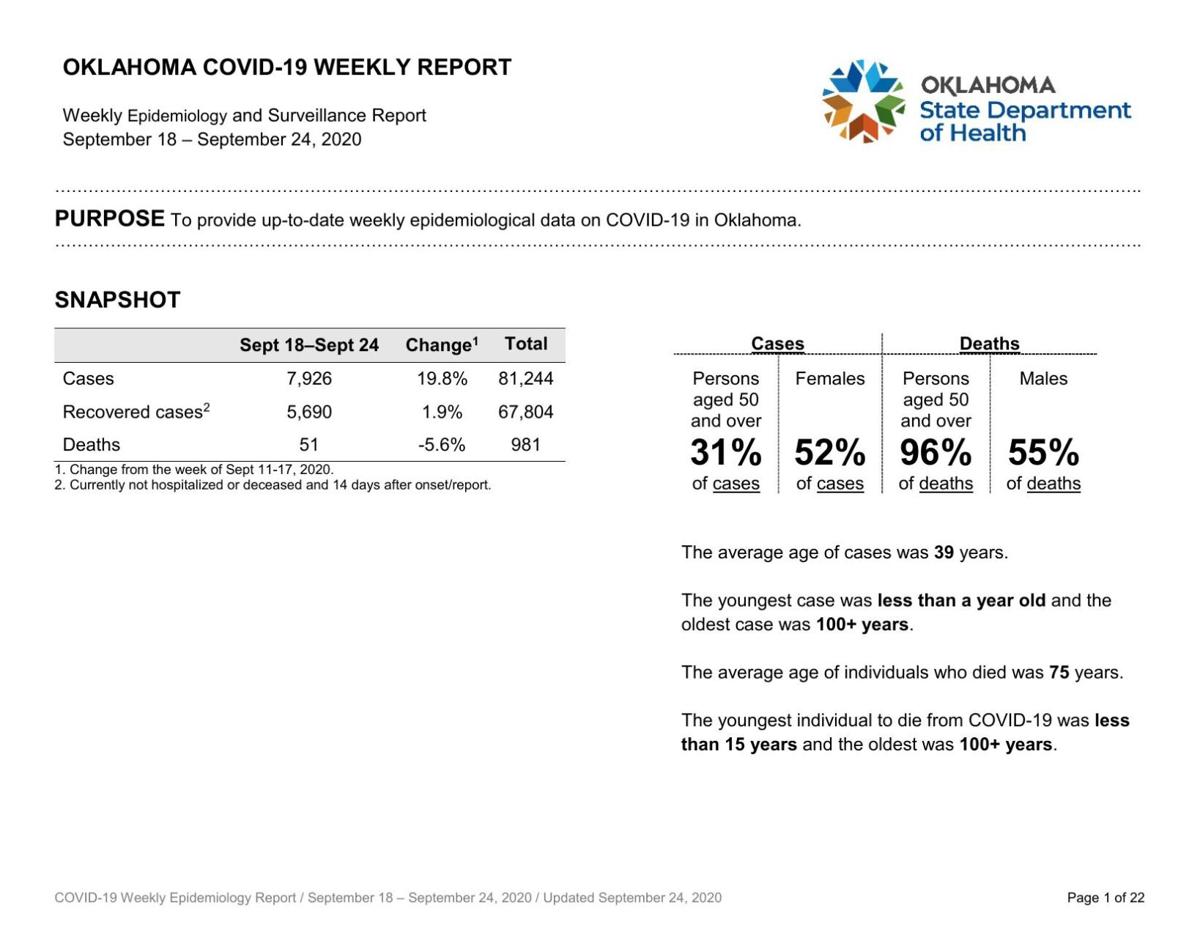 Department officials continue to urge social distancing and wearing masks when around other from outside the household family and regular handwashing. OSDH also says testing of those with or without systems is "critical" for contact tracing efforts, and that free testing is available at county health departments.

The past week was hard for Woodward County, which saw an outbreak of more than 800 cases at William S. Key Correctional Center and a death of an inmate reported Tuesday in addition to the three deaths announced Saturday.

The latest Department of Corrections report on Friday shows the facility had 837 inmates who have tested positive for COVID-19, with three of those hospitalized and 33 recovered, 137 in quarantine and 833 in isolation and 12 staff members positive with five of those recovered.

OSDH reported at a Thursday news conference in Oklahoma City that James Crabtree Correctional Center in Helena had 30 inmates test positive for COVID-19, but the DOC website shows no current cases with three recovered. A DOC spokesman said they gather the information from OSDH but there can be a delay in reports. There has been a steady increase in cases in Helena reported by the OSDH, with 44 cases and 31 recovered as of Saturday.

Other Northwest Oklahoma county case increases on Saturday were six in Kingfisher, three in Woodward, two each in Major and Woods and one each in Alfalfa and Blaine. Case increases in cities and towns included two each in Alva and Hennessey and one each in Fairview, Fort Supply, Garber, Lamont, Waukomis and Woodward. Pond Creek and Seiling each saw a reduction of one case.

There have been 43,549 Oklahoman women who have tested positive and 39,912 men. There were 49 listed as unknown gender, according to OSDH data on Saturday.

Data shows deaths in 66 of Oklahoma's 77 counties, with 194 in Oklahoma County; 160 in Tulsa County; 70 in Cleveland County; 50 in Rogers County; 40 in Washington County; 34 in McCurtain County; 33 in Creek County; 26 in Wagoner County; 25 in Delaware County; 22 in Muskogee County; 21 in Caddo County; 20 in Garfield County; 19 in Pittsburg County; 17 each in Canadian and LeFlore counties; 13 each in Comanche, Kay and Osage counties; 11 each in Grady, Mayes and Sequoyah counties; 10 each in Adair, Jackson, Lincoln and Pottawatomie counties; nine in Texas County; eight each in Carter, Cherokee and Greer counties; seven each in McClain and Okmulgee counties; six each in Ottawa, Payne and Seminole counties; five each in Garvin, McIntosh and Stephens counties; four each in Bryan, Haskell, Hughes, Johnston, Nowata, Okfuskee and Woodward counties; three each in Cotton, Pawnee and Pontotoc counties; two each in Choctaw, Kingfisher, Kiowa, Latimer, Marshall, Noble, Pushmataha and Tillman counties; and one each in Atoka, Beckham, Blaine, Craig, Dewey, Harper, Logan, Love, Major, Murray and Roger Mills counties.

In Enid, there have been 832 cases, with 655 recovered and 10 deaths from the 73701 ZIP code, primarily the eastern half of the city, and 689 cases, with 546 recovered and 10 deaths from 73703, or the western half, according to OSDH data on Saturday. There also has been one recovered case in the 73705 ZIP code, which is listed as Vance Air Force Base at https://www.unitedstateszipcodes.org/.

This story is developing and will be updated.