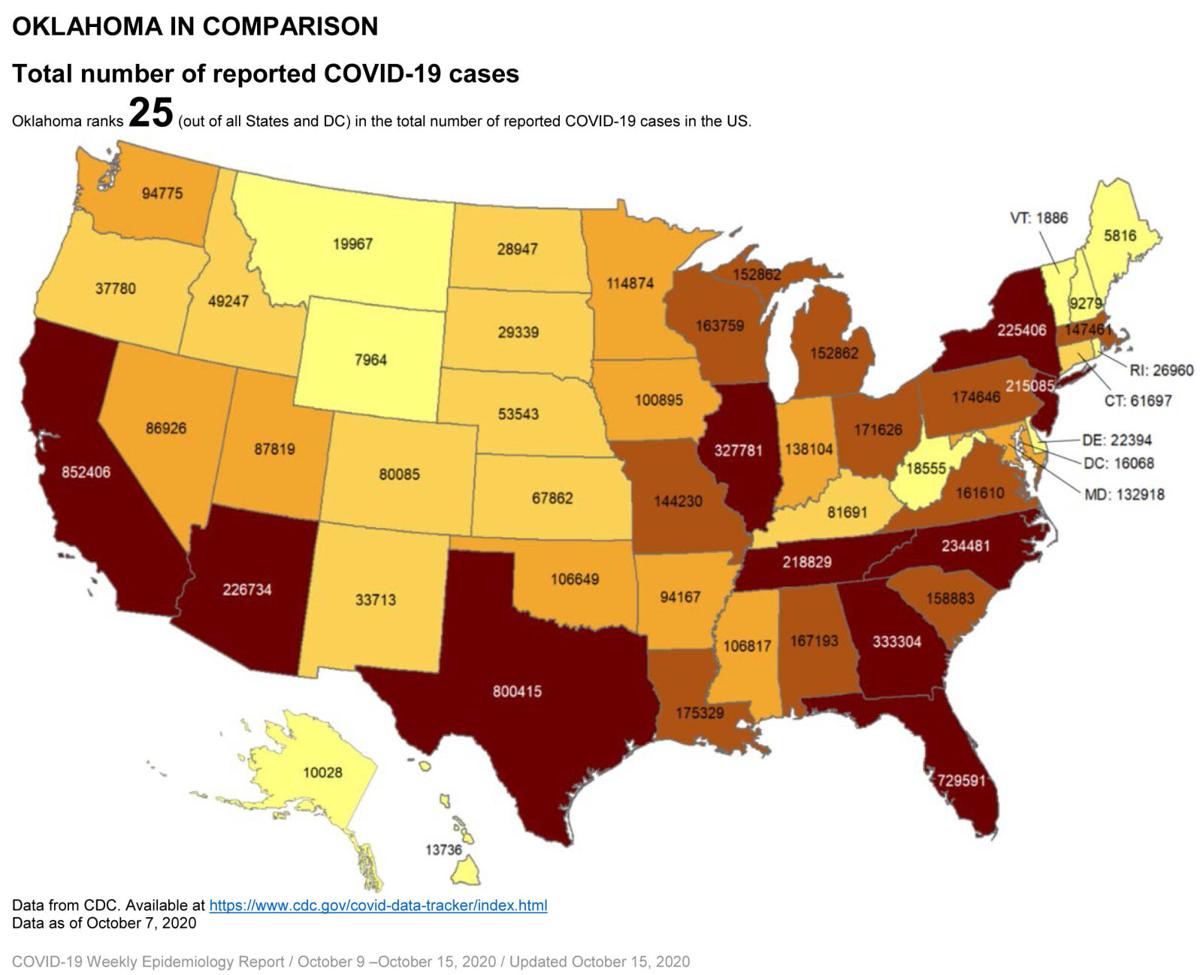 ENID, Okla. — Oklahoma saw 15% more COVID-19 cases and 16% more deaths related to the virus in a week-to-week comparison, according to a Oklahoma State Department of Health review.

Statewide, the number of cases gained in a week increased from 7,195 Oct. 2-8 to 8,272 Oct. 9-15, a difference of 1,077, according to the OSDH weekly report released Friday afternoon. There were 58 deaths in which COVID-19 was the cause or a contributing factor reported in the past week, compared to 50 the week before, the report shows.

Hospitalizations rose by 7.3% in the past week, with 579 confirmed cases in facilities Oct. 9-15, to top out at 7,601 overall since March, as of the end of the reporting period Thursday

On Saturday, the number of cases in the state rose by 1,195 to a cumulative 106,503, a 1.1% increase, according to the OSDH website. There were 14 new deaths reported, none of which were in Northwest Oklahoma.

Deaths reported were eight men and six women, with 11 in the 65 and older age group and three in the 50-64 age group, according to OSDH. Counties of residence were six in Bryan County, three in Lincoln County, two in Tulsa County and one each in Caddo, Canadian and Beckham counties. OSDH does not distinguish gender and age per county on the weekends.

Other Northwest Oklahoma county case increases on Saturday were six in Kingfisher, five in Blaine, four in Woodward, three in Major, two each in Alfalfa and Woods and one in Noble. Case increases in Northwest Oklahoma cities and towns included three each in Dover and Woodward; two each in Alva, Fairview and Hennessey; and one each in Canton, Carmen, Covington, Helena, Jet, Kingfisher, Longdale, Mooreland, Nash, Okarche, Pond Creek and Waukomis. Lamont and Waynoka each saw a reduction of one case.

There have been 55,506 Oklahoma women and 50,825 men who have tested positive for COVID-19 as of the OSDH report Saturday morning. There were 172 listed as unknown gender.

Data shows deaths in 68 of Oklahoma's 77 counties, with 216 in Oklahoma County; 185 in Tulsa County; 85 in Cleveland County; 53 in Rogers County; 41 in Washington County; 37 in McCurtain County; 36 in Creek County; 28 in Muskogee County; 27 each in Delaware and Wagoner counties; 24 in Caddo County; 23 in Garfield County; 21 each in Canadian and LeFlore counties; 20 in Pittsburg County; 16 in Comanche County; 15 in Kay County; 14 in Grady County; 13 each in Lincoln, Osage and Sequoyah counties; 11 each in Adair, Bryan, Jackson, Mayes and Pottawatomie counties; 10 each in Beckham and Texas counties; nine each in Carter, McClain and Payne counties; eight each in Cherokee, Greer, McIntosh, Okmulgee, Ottawa and Stephens counties; six each in Garvin, Okfuskee and Seminole counties; five each in Haskell, Pawnee and Woodward counties; four each in Hughes, Johnston, Nowata, Pontotoc and Pushmataha counties; three each in Cotton, Custer and Noble counties; two each in Choctaw, Craig, Kingfisher, Kiowa, Latimer, Logan, Major, Marshall, Murray, Roger Mills and Tillman counties; and one each in Atoka, Blaine, Dewey, Grant, Harper and Love counties.

In Enid, there have been 1,047 cases, with 896 recovered and 13 deaths from the 73701 ZIP code, primarily the eastern half of the city, and 962 cases, with 779 recovered and 10 deaths from 73703, or the western half, according to OSDH data on Saturday. There also has been one recovered case in the 73705 ZIP code, which is listed as Vance Air Force Base at https://www.unitedstateszipcodes.org/.