ENID, Okla. — Garfield County remained in the orange, or moderate, risk for COVID-19 on Friday, but the average daily cases in the Enid area fell considerably this past week, according to the Oklahoma State Department of Health.

The designation ensures that Enid Public Schools and other schools that have adopted measures based on the OSDH's alert map will remain with in-person instruction in the coming week.

"As more COVID-19 cases are confirmed in our county, it is important to remain vigilant," an update on the EPS website states. "The EPS plan states that if our county moves to 50 or more positive COVID-19 cases per 100,000 population, as indicated by the OSDH, the entire district will move to distance/virtual learning." 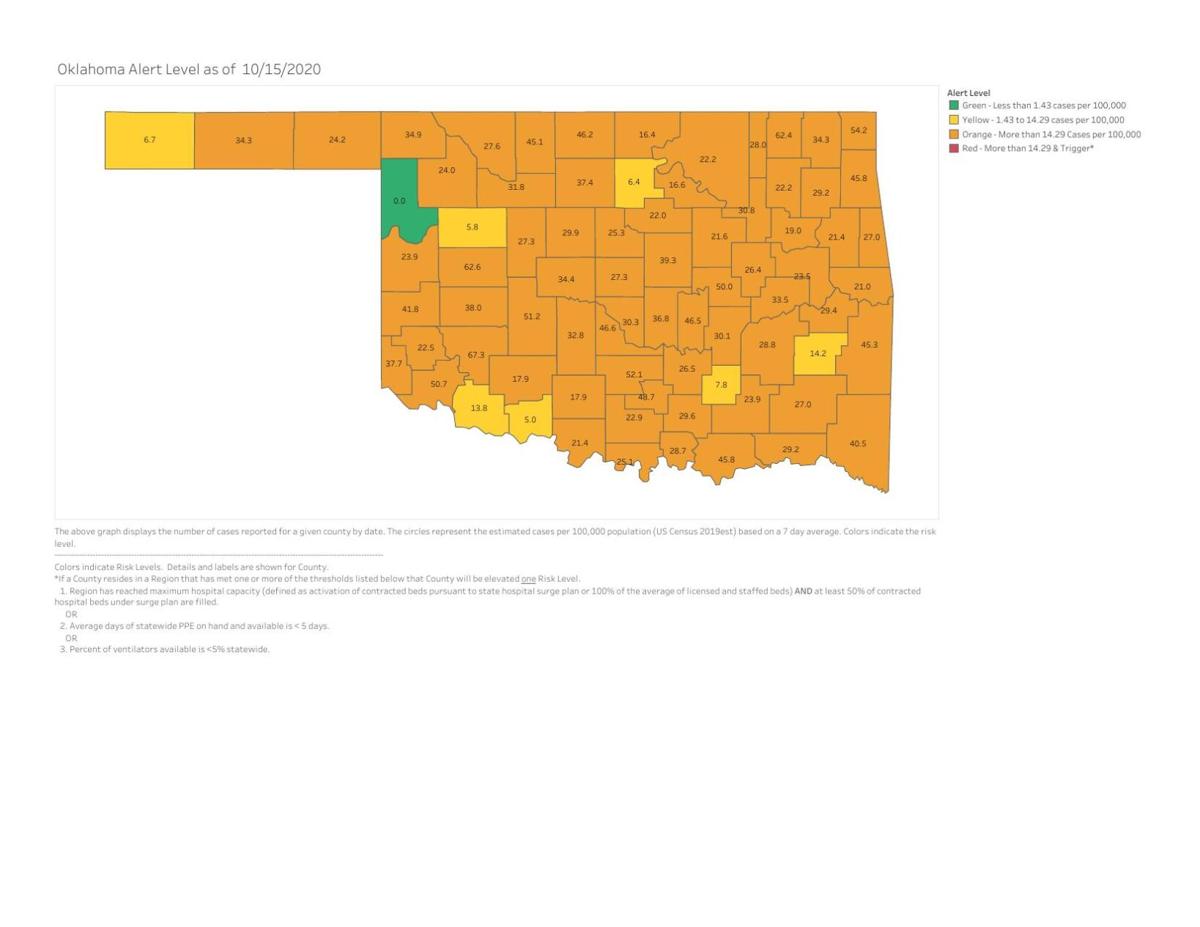 The OSDH releases its report each Friday, based on the number of cases reported from the previous Friday through Thursday. Sixty-nine counties remain above the 14.29 average daily cases per 100,000 threshold designating moderate-risk areas, according to the OSDH's weekly alert map. Seven counties were deemed low risk, including Noble County just east of Garfield County. One county, Ellis, was marked as "new normal" with an average below 1.43 cases.

While new case numbers were down this past week in Garfield County — falling from an average 47.7 per 100,000 population the prior week to 37.4 this past week — the county has seen higher numbers in recent days.

Based on its 2019 census population, Garfield County must maintain an average daily new case total under 30.528 to remain lower than the 50 per 100,000 population.

COVID-19 cases have risen by more than 30 for the last two days in Garfield County, which saw increases of 36 on Thursday and 39 on Friday, according to the OSDH. Enid reached a cumulative 2,001 cases with an increase of 36 cases on Friday.

Other Northwest Oklahoma county case increases on Friday were 12 in Kingfisher, seven in Woodward, six in Blaine, four in Grant, three each in Major and Woods, two in Noble and one in Alfalfa. Case increases in Northwest Oklahoma cities and towns included five in Woodward, four each in Hennessey and Kingfisher, three in Fairview, two each in Fort Supply, Dover, Okarche, Pond Creek and Waynoka and one each in Aline, Cashion, Drummond, Freedom, Lahoma, Watonga and Waukomis.

Statewide, the number of cases rose by 1,472, or 1.4%, on Friday, with 11 more deaths reported by the OSDH. None of the new deaths were in Northwest Oklahoma.

Statewide, there have been 1,154 deaths in which the virus was the cause or a contributing factor since the pandemic reached Oklahoma in March, according to the OSDH.

Deaths reported Friday included a McClain County man in the 50-64 age group and 10 others in the 65 and older age group: three men and a woman in Oklahoma County, women in Beckham, Comanche, Grady, Muskogee and Tulsa counties and a Custer County man, according to the OSDH.

Cumulative hospitalizations involving COVID-19 saw a single-day increase of 150 for a total of 7,679. Of those, 792 patients positive or under investigation for the virus were in hospitals, a single-day decrease of one, with 301 in intensive care, an increase of 10, according to the OSDH Executive Report released Friday evening.

Hospitalizations involving COVID-19 in the Northwest region of the state remained at 44 on Friday, according to that same report, which also shows 123 of 981 ICU beds available, or 13%, and 1,063 of 5,943 medical surgery beds, 18%, with a hospital reporting compliance at 92%.

There have been 54,896 Oklahoma women and 50,242 men who have tested positive for COVID-19 as of the OSDH report Friday morning. There were 170 listed as unknown gender.

Data shows deaths in 68 of Oklahoma's 77 counties, with 216 in Oklahoma County; 183 in Tulsa County; 85 in Cleveland County; 53 in Rogers County; 41 in Washington County; 37 in McCurtain County; 36 in Creek County; 28 in Muskogee County; 27 each in Delaware and Wagoner counties; 23 each in Caddo and Garfield counties; 21 in LeFlore County; 20 each in Canadian and Pittsburg counties; 16 in Comanche County; 15 in Kay County; 14 in Grady County; 13 each in Osage and Sequoyah counties; 11 each in Adair, Jackson, Mayes and Pottawatomie counties; 10 each in Lincoln and Texas counties; nine in Beckham, Carter, McClain and Payne counties; eight each in Cherokee, Greer, McIntosh, Okmulgee, Ottawa and Stephens counties; six each in Garvin, Okfuskee and Seminole counties; five each in Bryan, Haskell, Pawnee and Woodward counties; four each in Hughes, Johnston, Nowata, Pontotoc and Pushmataha counties; three each in Cotton, Custer and Noble counties; two each in Choctaw, Craig, Kingfisher, Kiowa, Latimer, Logan, Major, Marshall, Murray, Roger Mills and Tillman counties; and one each in Atoka, Blaine, Dewey, Grant, Harper and Love counties.