The White House report for Oklahoma released this week shows the state in the nationally generated red zone for rate of cases and for test positivity, the latter of which was 3rd-highest in the country. The state alert released on Friday that school districts mainly follow shows several counties in the statewide orange, or moderate, risk for COVID-19. 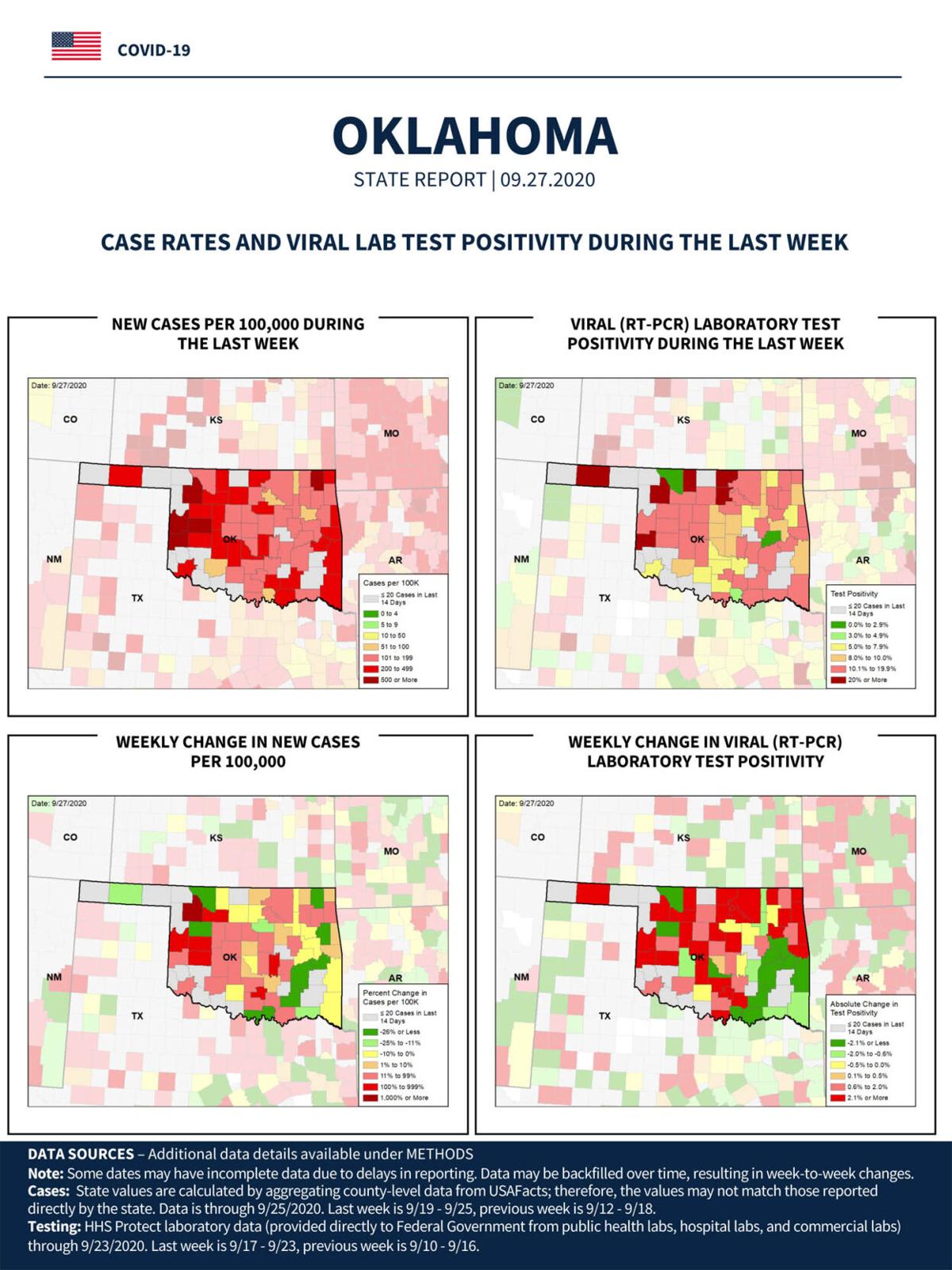 The Top 12 metro areas in the red zone on the national level are Woodward, Stillwater, Enid, Weatherford, McAlester, Durant, Guymon, Miami, Elk City and Ponca City, according to the report.

Oklahoma had 201 new cases per 100,000 population in the last week, according to the report, outpacing the national average of 93 per 100,000 and representing a 15% increase from the previous week's report.

In addition to the Garfield County death announced Wednesday, one other, a LeFlore County man, was in the 50-64 age group. There was one each in the 18-35 and 36-49 groups: a Tulsa County man and woman, respectively. Nine from the 65 and older group were two men from Tulsa County; men from Bryan, Carter, McIntosh, Noble and Pittsburg counties; and women from Cleveland and Pittsburg counties.

There have been an overall 6,449 Oklahomans hospitalized who have tested positive for COVID-19, an increase of 83 since the last OSDH daily report on Tuesday. Of those, 610 were hospitalized, a single-day decrease of 18, with 239 in intensive care, a decrease of six, as of Wednesday evening's Executive Report. Only 154 of 962 ICU beds are available, 16%, according to a hospital survey listed on the report with 94% of facilities reporting.

There were 31 Oklahomans hospitalized who had tested positive for COVID-19 in the Northwest region of the state, a decrease of three compared to the prior day's Executive Report.

In Enid, Integris Bass Baptist Health Center reported 11 inpatients who had tested positive for the virus, while St. Mary's Regional Medical Center had eight, according to hospital spokeswomen on Wednesday.

Other Northwest Oklahoma county case increases on Wednesday were 10 each in Kingfisher and Woodward, six in Noble, three in Blaine and two in Woods. Case increases in Northwest Oklahoma cities and towns include seven in Fort Supply; five each in Kingfisher and Woodward; four in Hennessey; two each in Alva, Garber, Longdale and Waukomis; and one each in Fairview and Mulhall. There was a reduction of one case in Mooreland.

The number of active COVID-19 cases in Oklahoma prisons was 647 Wednesday morning, according to the Department of Corrections.

There have been 45,394 Oklahoman women who have tested positive and 41,764 men. There were 41 listed as unknown gender, according to OSDH data on Wednesday.

Data shows deaths in 67 of Oklahoma's 77 counties, with 195 in Oklahoma County; 166 in Tulsa County; 71 in Cleveland County; 52 in Rogers County; 40 in Washington County; 34 each in Creek and McCurtain counties; 26 in Wagoner County; 25 in Delaware County; 23 in Muskogee County; 21 each in Caddo and Garfield counties; 20 in Pittsburg County; 19 in LeFlore County; 17 in Canadian County; 13 each in Comanche, Kay and Osage counties; 11 each in Grady, Mayes and Sequoyah counties; 10 each in Adair, Jackson, Lincoln and Pottawatomie and Texas counties; nine in Carter County; eight each in Cherokee, Greer and Okmulgee counties; seven each in McClain and Payne counties; six each in McIntosh, Ottawa and Seminole counties; five each in Bryan, Garvin, Okfuskee and Stephens counties; four each in Haskell, Hughes, Johnston, Nowata, and Woodward counties; three each in Beckham, Cotton, Noble, Pawnee and Pontotoc counties; two each in Choctaw, Kingfisher, Kiowa, Latimer, Marshall, Pushmataha and Tillman counties; and one each in Atoka, Blaine, Craig, Dewey, Grant, Harper, Logan, Love, Major, Murray and Roger Mills counties.