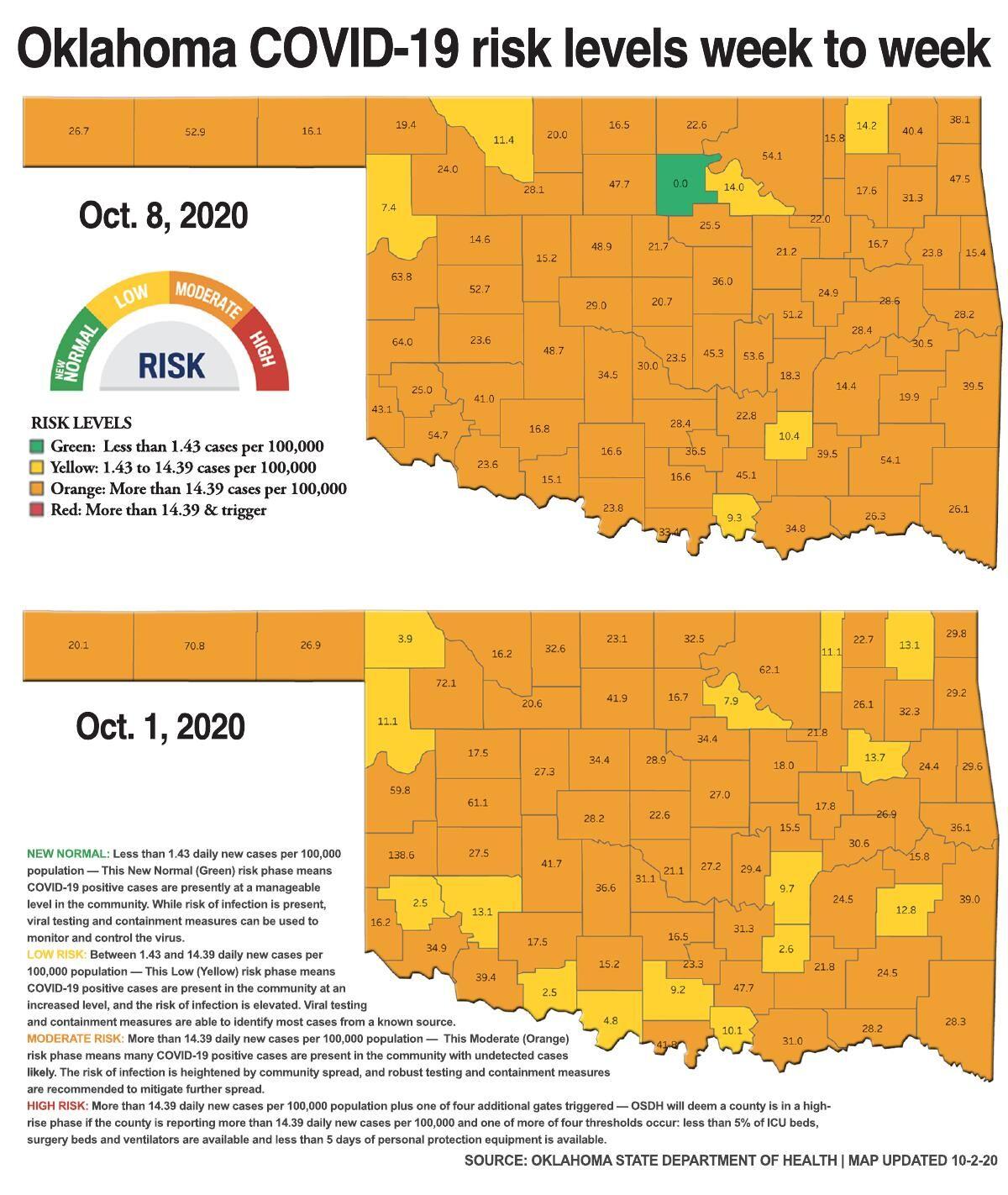 ENID, Okla. — The average number of daily new COVID-19 cases in Garfield County rose considerably this past week but stayed under the threshold set to keep in-person classes at Enid Public Schools.

There were 47.7 new cases per day, on average, for 100,000 population, the week of Oct. 2 through Thursday in Garfield County, according to the Oklahoma State Department of Health's alert map that measures the COVID-19 risk levels each week. The county, along with 70 of Oklahoma's 77 counties, remains in the orange, or moderate, risk for the virus, according to OSDH. Last week, Garfield County's daily average was 41.9.

Officials with Enid and Chisholm public schools have announced they will offer in-person classes for students as long as the daily average remains below 50 per 100,000 population.

There were six counties, including Woods County in Northwest Oklahoma, that were under yellow, or low, risk in the state, and one county, Noble, just east of Garfield, that was in the green, or "new normal," risk for COVID-19, with zero cases as a daily average, according to OSDH. 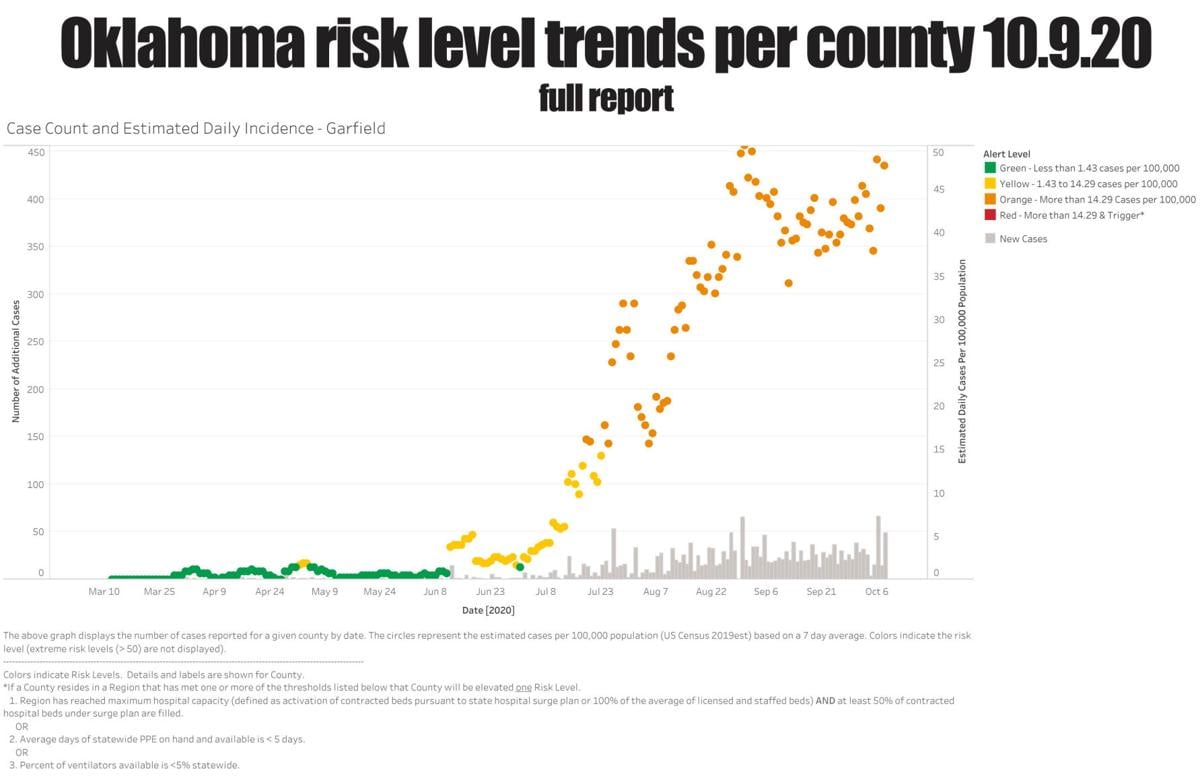 Statewide, however, the number of new cases neared record levels, with 1,524 on Friday, according to the OSDH. That is second only to the 1,714 cases gained July 21, according to Saxum, the public relations firm hired to represent the Health Department. Tuesday the state recorded what was then the third-highest daily gain at 1,364.

Six additional deaths also were reported by the OSDH on Friday, with one of those in the past 24 hours. None of the new deaths were in Northwest Oklahoma.

The state's 1.6% increase in cases Friday took the overall total of confirmed COVID-19 cases to 97,088, with 13,515 of those active, a single-day gain of 325, and 82,482, or just under 85%, having recovered, including 1,193 since Thursday's OSDH report. Overall, there have been 1,091 deaths in which the virus was the cause or a contributing factor since the pandemic reached Oklahoma in March, according to the OSDH.

Deaths reported Friday were three in the 65 and older age range, men in Grady, Muskogee and Tulsa counties; two in the 50-64 age group, a Canadian County man and Ottawa County woman; and one was in the 36-49 age group, a Payne County man.

Other Northwest Oklahoma county case increases on Friday were 17 in Woodward, nine in Kingfisher, five in Blaine, two each in Grant and Major and one in Alfalfa. Case increases in Northwest Oklahoma cities and towns included 11 in Fort Supply, seven in Woodward, four in Kingfisher, three in Medford, two each in Ames, Hennessey, Ringwood and Waukomis and one each in Burlington, Dover, Covington, Mulhall, Okeene, Pond Creek and Seiling. 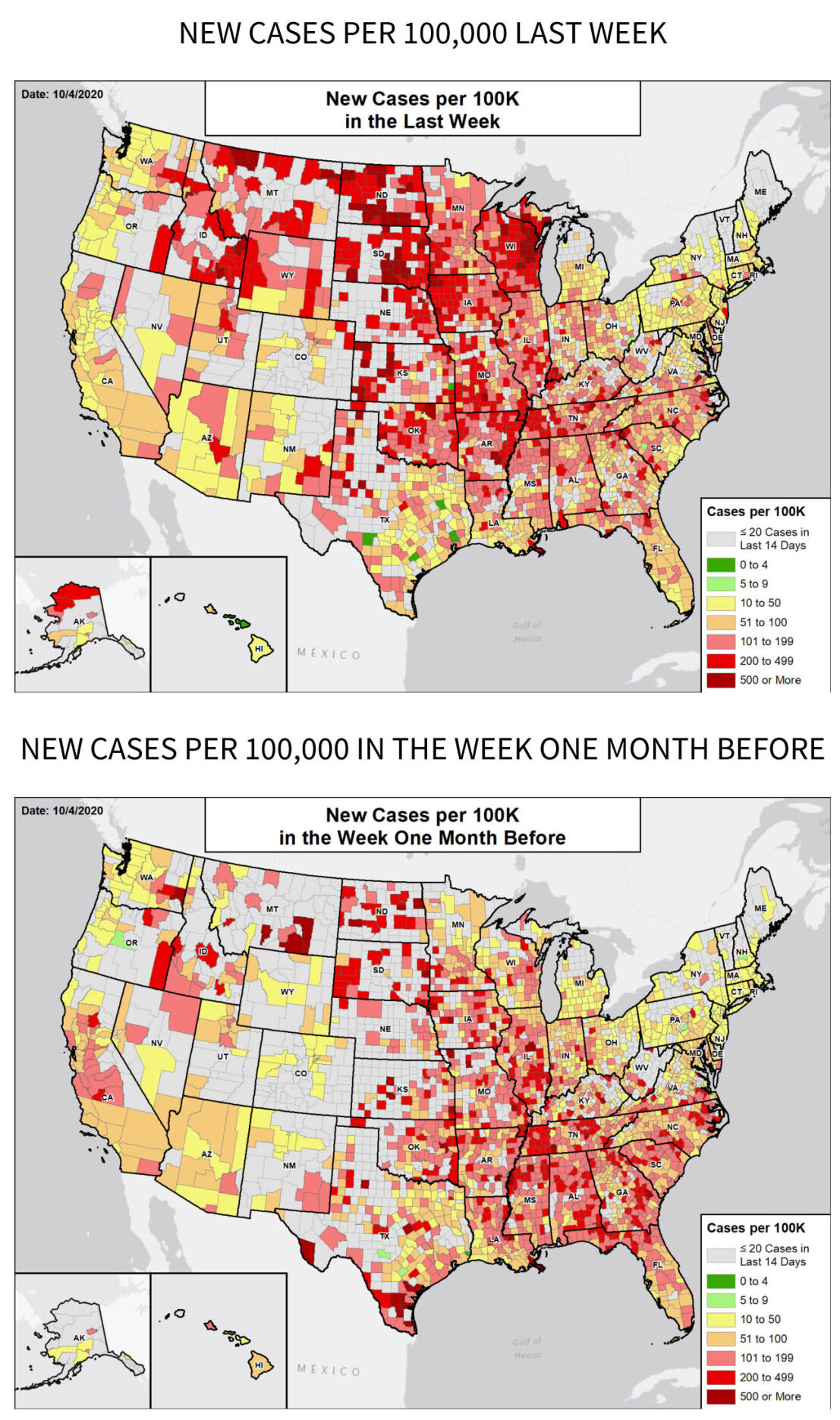 Nationally, the state remains under the White House COVID-19 report's red zone, but the state made gains toward the last week of September and first of October, moving from 5th in the nation in terms of rate of COVID-19 cases to 10th. Oklahoma has the 5th-highest rate in the country for test positivity, according to the same report.

The state saw decreases in terms of new cases and test positivity over the week Sept. 26 through Oct. 2, according to the White House report.

With hospitalizations on the rise in the state, there are 132 of 1,037, or 13%, ICU beds available, with 94% reporting compliance among facilities, according to that same report.

Medical surgery bed availability was at 17%, PICU beds were at 21% and negative flow rooms were at 32%. There were 45 Oklahomans hospitalized who had tested positive for COVID-19 in the Northwest region of the state, according to the Executive Report.

Locally on Friday, St. Mary's Regional Medical Center had 11 inpatients who had tested positive for COVID-19 and the facility reported a death. Integris Bass Baptist Health Center had nine.

There have been 50,656 Oklahoma women and 46,365 men who have tested positive for COVID-19 as of the OSDH report Friday morning. There were 67 listed as unknown gender.

Data shows deaths in 68 of Oklahoma's 77 counties, with 200 in Oklahoma County; 176 in Tulsa County; 81 in Cleveland County; 53 in Rogers County; 41 in Washington County; 35 each in Creek and McCurtain counties; 26 each in Delaware, Muskogee and Wagoner counties; 22 in Garfield County; 21 each in Caddo and LeFlore counties; 20 in Pittsburg County; 18 in Canadian County; 15 in Kay; 13 each in Comanche and Osage counties; 12 each in Grady and Sequoyah counties; 11 each in Mayes and Pottawatomie counties; 10 each in Adair, Jackson, Lincoln and Texas counties; nine in Carter County; eight each in Beckham, Cherokee, Greer, McIntosh, Okmulgee, Ottawa and Payne counties; seven in McClain County; six in Seminole County; five each in Bryan, Garvin, Okfuskee, Pawnee, Stephens and Woodward counties; four each in Haskell, Hughes, Johnston and Nowata counties; three each in Cotton, Noble, Pontotoc and Pushmataha counties; two each in Choctaw, Kingfisher, Kiowa, Latimer, Logan, Major, Marshall, Murray and Tillman counties; and one each in Atoka, Blaine, Craig, Custer, Dewey, Grant, Harper, Love and Roger Mills counties.

In Enid, there have been 965 cases, with 813 recovered and 12 deaths from the 73701 ZIP code, primarily the eastern half of the city, and 866 cases, with 684 recovered and 10 deaths from 73703, or the western half, according to OSDH data on Friday. There also has been one recovered case in the 73705 ZIP code, which is listed as Vance Air Force Base at https://www.unitedstateszipcodes.org/.

Long-term care facilities that saw increases on the Friday evening Executive Report by the OSDH included The Living Center, which gained five, and The Commons, which gained one, in Enid.