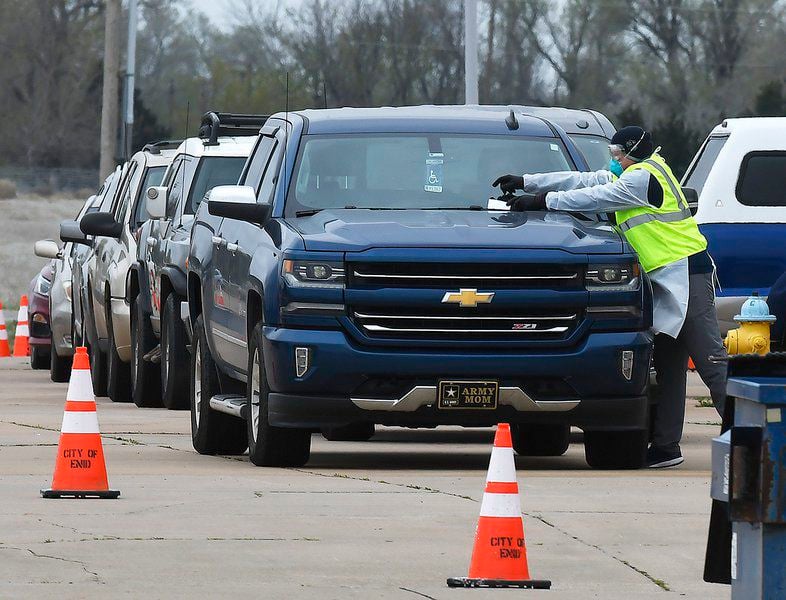 Information is attached to the windshield of a truck going through the drive-through COVID-19 testing Friday, April 3, 2020, at Chisholm Trail Expo Center.

Information is attached to the windshield of a truck going through the drive-through COVID-19 testing Friday, April 3, 2020, at Chisholm Trail Expo Center.

"We had 101 cars come through and 98 tests were done," said Maggie Jackson, OSDH regional director of community engagement and health planning. "It was a smooth operation. I am so proud of our team."

She said there was a lot of support from the local Health Department district, with 43 people from area departments helping at the clinic. Jackson said there also were members of Garfield County Sheriff's Office and Enid Police Department present.

She said Oklahoma State University labs have begun processing the tests, but she was unsure of the turnaround time.

"It could be up to four or five days," Jackson said. "We're hoping not that long."

"So, if you haven't gotten called," Jackson said, "you're probably negative."

Jackson said since Gov. Kevin Stitt put a call out for expanded tested, the drive-through clinic in Enid "loosened criteria" for testing.

"We tested people that had fever or cough or shortness of breath or knew they were in contact with a positive COVID-19 case," Jackson said. "Most of the people we saw today were pretty sick. We hope we can get them some answers pretty soon."

She said Integris Bass Baptist Health Center donated 100 tests on top of the tests the Health Department already had. She said those tests will be used in Garfield County and surrounding counties in the district.

"We are thankful for all those partners who helped us today, the Chisholm Trail Expo Center, Garfield County Sheriff's Office, Garfield County Emergency Management," Jackson said. "Our Garfield County Health Department staff were an amazing team today. I’m so proud of them."

Garfield, Grant, Kingfisher and Major counties all reported new cases of COVID-19, as the official total of positive test results nears 1,000 in Oklahoma, according to the state Health Department on Friday.

Four more deaths were reported statewide for a total of 38, with the number of COVID-19 cases increasing to 988 and 289 hospitalizations.

Garfield County now has five cases documented through the Health Department, while Grant and Major counties added one each and Kingfisher County now has three, OSDH reports.

Fifty-six of Oklahoma's 77 counties are reporting cases, according to OSDH. There have been 1,315 test negative for the virus through the OSDH State Public Health Laboratory.

The latest deaths announced by OSDH on Friday were four females all older than 65 — one in Cleveland County and three in Tulsa County, according to OSDH.

Of those who have died, 28 have been older than 65, eight have been in the 50-64 age range and two have been in the 36-49 age range. Deaths have been Canadian, Cleveland, Creek, Greer, Kay, Mayes, Muskogee, Oklahoma, Osage, Pawnee, Sequoyah, Stevens, Tulsa and Wagoner counties, OSDH reports.

Positive tests per county in the state are 237 in Oklahoma County; 175 in Tulsa County; 130 in Cleveland County; 39 in Creek County; 33 in Comanche County; 30 in Wagoner County, 29 in Canadian County; 28 in Washington County; 25 in Kay County; 21 in Osage County; 18 in Payne County; 16 each in Muskogee and Pawnee counties; 14 in Adair County; 11 each in Delaware and Pottawatomie counties; 10 each in McClain and Rogers counties; eight each in Garvin, Ottawa and Stevens counties; seven each in Cherokee, Lincoln, Nowata, Okmulgee and Pontotoc counties; five each in Custer, Garfield, Grady, Greer, Logan, Mayes and Noble counties; four each in Cotton, Jackson and Sequoyah counties; three each in Bryan and Kingfisher counties; two each in Caddo, Craig, Latimer, Love and Pittsburg counties; and one each in Atoka, Beckham, Carter, Choctaw, Grant, Kiowa, LeFlore, Major, McCurtain, Seminole, Texas, Washita and Woodward counties, according to OSDH information released Friday morning.

Both St. Mary's Regional Medical Center and Integris Bass Baptist Health Center each have reported one case of COVID-19 under isolated treatment at their facilities this week.

Bass confirmed it still has one patient and no discharges as of Friday.

St. Mary's has declined to provide updated information on COVID-19 patients and deaths in its facility.

ENID - Service for Doris J. Jones, age 85, of Enid, will be 10 a.m. Thursday, Aug. 13, 2020, the Ladusau-Evans Chapel. Burial will follow in the Enid Cemetery under direction of Ladusau-Evans Funeral Home.

ENID - Graveside services for Almeda (Kramer) Smith, 94, of Golden Oaks Village will be held 10 a.m. Friday, Aug. 14, 2020, at Douglas Union Cemetery. Services are under the direction of Ladusau-Evans Funeral Home.