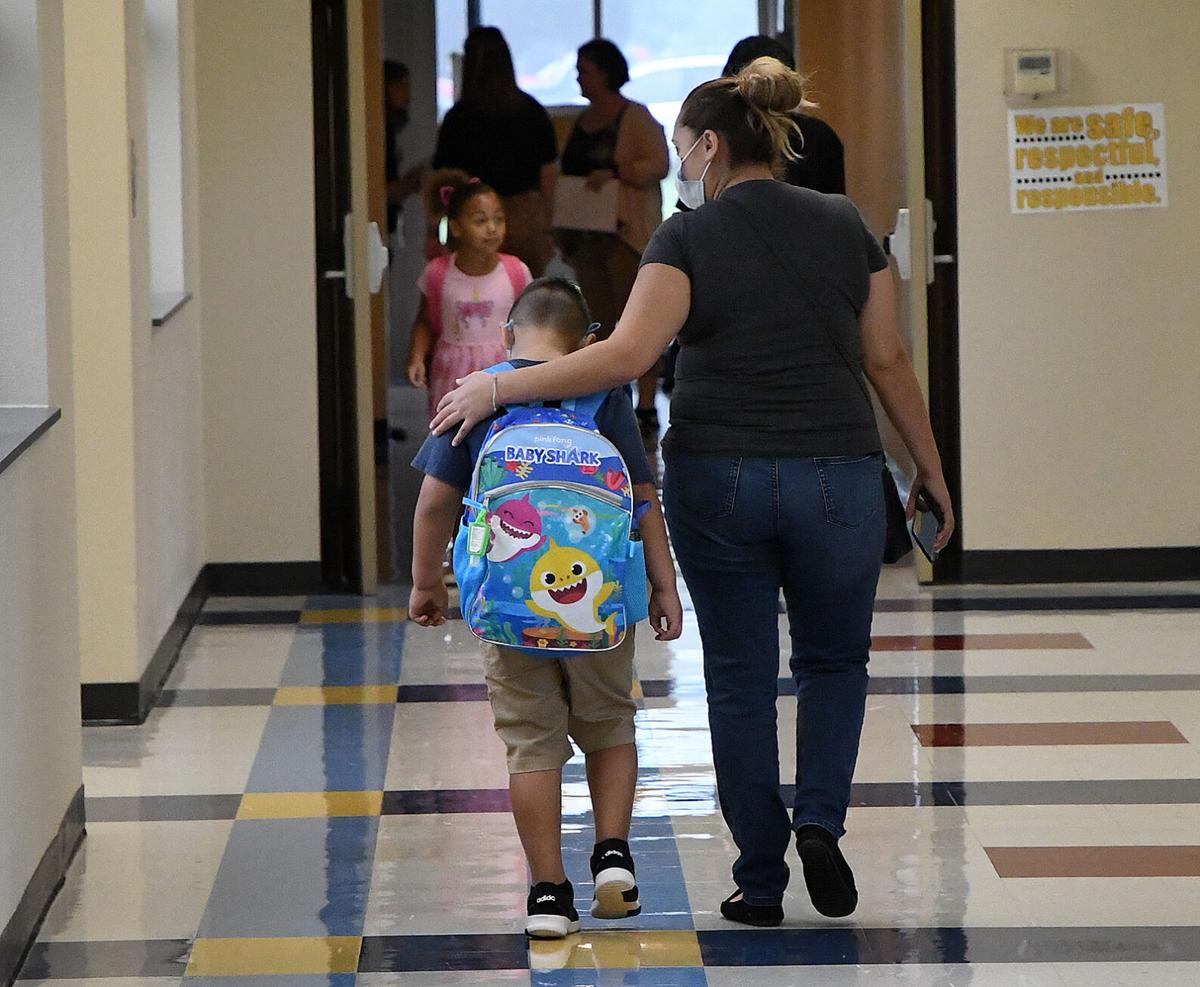 A mom walks her son to his classroom at Coolidge Elementary School on the first day of school Wednesday, Aug. 18, 2021. (Billy Hefton / Enid News & Eagle) 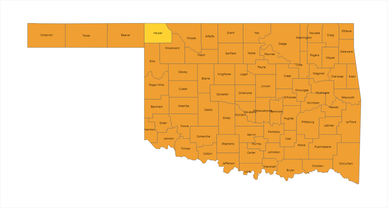 Of Oklahoma's 77 counties, 76 are in the moderate, or "orange, risk level and one is in the low, or "yellow," risk level.

ENID, Okla. — With no mask mandate or quarantine policy in place this year, Enid Public Schools is reporting a slightly higher number of positive COVID cases from about a year ago.

As of Wednesday afternoon, 52 EPS students and 12 staff were reported as positive COVID cases in isolation, according to the district’s public case totals reported online.

Nearly every EPS school has at least one positive case except Coolidge and Hoover elementary schools.

Almost half of the students in isolation are from secondary-level schools: 10 cases at Enid High School and 13 combined at Longfellow, Emerson and Waller middle schools.

On Sept. 1, 2020, EPS reported 41 student and nine staff positive cases in isolation; then, nearly 600 more students and staff also were reportedly in quarantine for close contact and possible exposure to COVID.

COVID levels in the county are also returning to levels from the same time last year.

This week, Garfield County reported 45.9 cases per 100,000 on a seven-day average; by Sept. 3 last year, the county was at 49.14 average cases a week, up 14 from a week before, according to Oklahoma State Department of Health.

Under its re-entry plan last fall, EPS required masks with in-person instruction until county numbers reached at least 50 positive average COVID cases per 100,000 population. The entire district then moved to distance learning in November after Garfield County topped that rate of community spread.

Under the current re-entry plan, the superintendent still will be able to close school buildings if either not enough faculty and staff are present; or more than 30% of individuals are positive cases or quarantining.

Current state law, set to be paused next week under court injunction, prohibits mandating masks in most schools unless the governor declares a state of emergency for the county.

EPS families and staff this year are expected to self-report positive cases and self-assess for possible COVID symptoms, but the district isn’t requiring individuals or whole classes to quarantine this year.

Neither is Chisholm Public Schools, which as of Wednesday has reported eight positive student cases since school started Aug. 18. Only positive cases will be sent home, district officials said during a board of education meeting Wednesday. Students possibly exposed are not required to stay home and quarantine.

Pioneer-Pleasant Vale schools do not appear to report their active cases online, but the district asks possibly exposed students to quarantine after performing contact tracing from positive COVID cases in school. Pioneer also notifies parents whose children may have come into contact.

All Oklahoma school districts are required to report positive cases every day to the state Department of Education through the OSDE website’s Single Sign-on service. These also are expected to be reported to local Health Departments, which may recommend quarantine.

Wilkins said each student’s COVID-19-positive exposure or test will be evaluated on a case-by-case basis and that determination of specific guidance will be made by administration.

Three Enid residents were among the 189 COVID-19-related deaths in the past week reported statewide by OSDH on Wednesday.

Of the county’s 144 deaths, 133 have been in Enid, according to OSDH city data, with five in Lahoma, one each in Drummond, Fairmont, Garber, Covington and Waukomis, and one not listed by town. Deaths listed by ZIP code on the OSDH website show Enid with 131 deaths.

In Northwest Oklahoma, one death each was also reported in Blaine, Noble and Woods counties.

OSDH showed 551,958 total cases from CDC provisional state data, including 2,538 from Wednesday, and 550,239 total cases, a weekly increase of 19,645, with OSDH’s disease investigation summary. Of the latter number, there were 26,640 active, an increase of 3,148 in the past week. OSDH is no longer reporting recovered cases.

Other Northwest Oklahoma county case increases in the past week included 78 in Noble, 64 in Blaine, 59 in Kingfisher, 49 in Woods, 34 each in Major and Woodward, 19 in Grant and 14 in Alfalfa.

OSDH’s weekly numbers — which OSDH acute disease service reports to the CDC — on Wednesday showed Oklahoma has 8,001 confirmed deaths, a weekly increase of 189, though the CDC/NCHS’ Provisional Death Count, which is based on death certificates and is OSDH’s primary reported number, placed the overall count in Oklahoma at 9,199 deaths, a weekly increase of 169, in which the coronavirus was the cause or a contributor.

There have been 869 hospitalizations in the past week, bringing the total number of hospitalization since the first case was confirmed in Oklahoma in March 2020 to 31,855, and according to OSDH’s Situation Update, there is a three-day average of 1,477 total COVID-19 hospitalizations — including 41 pediatric hospitalizations — an increase of one since last week. Of those, 413 are in the ICU across the state.

The three-day average hospitalizations in the Northwest Region is 47, with 11 in the ICU. St. Mary’s Regional Medical Center reported it had 12 confirmed positive COVID-19 patients on Wednesday, and Integris Bass Baptist Health Center reported 13 patients.

OSDH reported that as of Tuesday, two ICU beds, or 7.7% of the total, and 216 adult inpatient beds, or 50.1% of the total, were available in the Northwest Region, which consists of 18 counties. 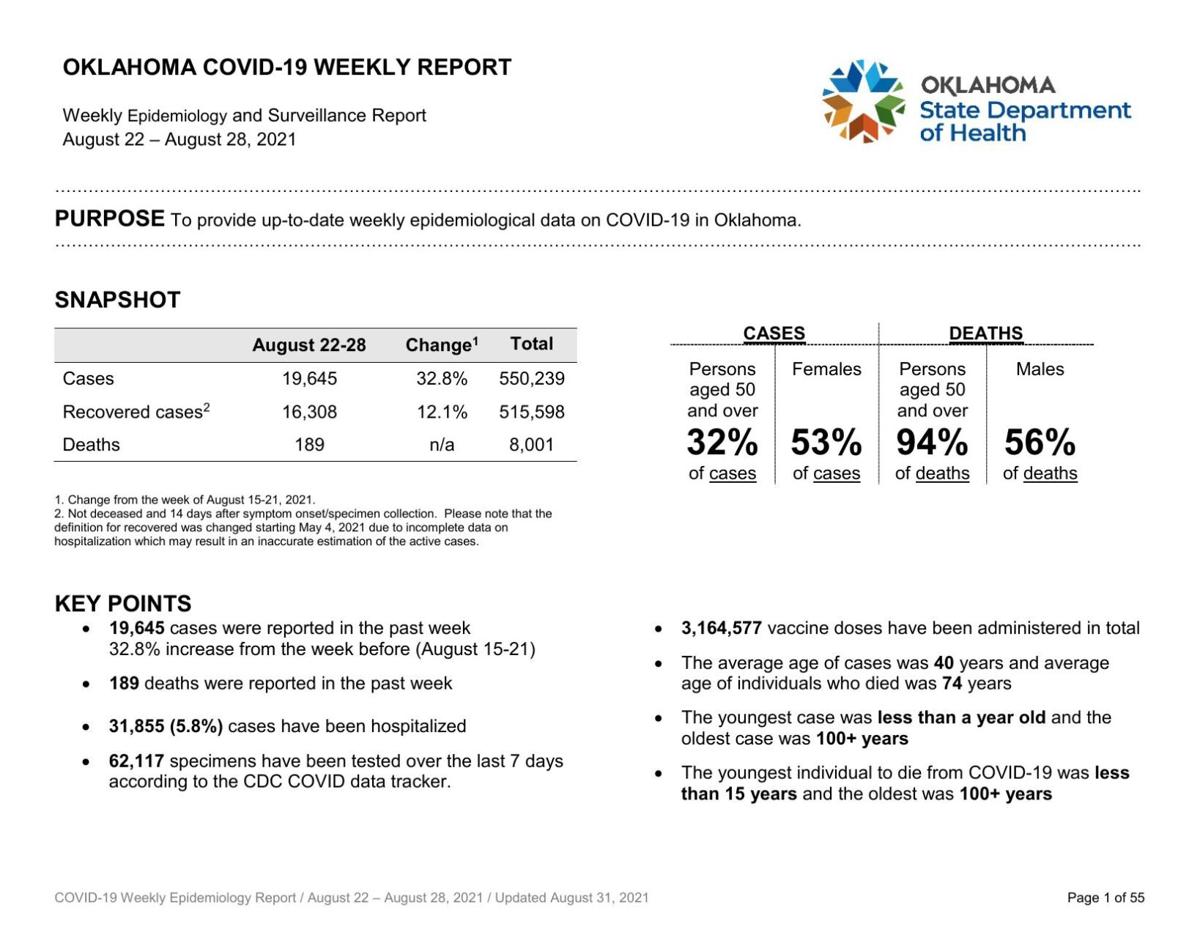 Over half of all eligible Garfield County residents have received at least the first dose of the three COVID vaccines.

According to OSDH, 45.4% of people 12 and older in Garfield County have completed the series, along with 76% of those 65 and older who have also been fully vaccinated.

Oklahoma also saw a 32.8% increase in the number of reported cases statewide compared with the previous week, according to OSDH.

• Kingfisher with 2,340 cases, 2,207 recovered, 90 active and 43 deaths, 21 from Kingfisher, 12 from Hennessey, five from Okarche — which Kingfisher shares with Canadian County — two from Dover and three not listed by town.

• Alfalfa with 1,223 cases, 1,192 recovered, 24 active and seven deaths, with city data listing three from Carmen, two each from Aline and Helena and one each from Cherokee and Jet. City data encompasses rural towns that could include those residing in neighboring counties, which could cause the discrepancy.

McKendrick is police and court reporter and Ewald is copy editor and city/education reporter for the Enid News & Eagle.

Have a question about this story? Do you see something we missed? Send an email to kmckendrick@enidnews.com or aewald@enidnews.com.

Starting next week, public schools in the state can mandate masks as long as they offer parents opt-out options for personal, religious or medical reasons, an Oklahoma County judge ruled Wednesday.

COVID-19 cases per county in Oklahoma as reported by the Oklahoma State Department of Health Wednesday, Sept. 1, 2021. SOURCE: OSDH