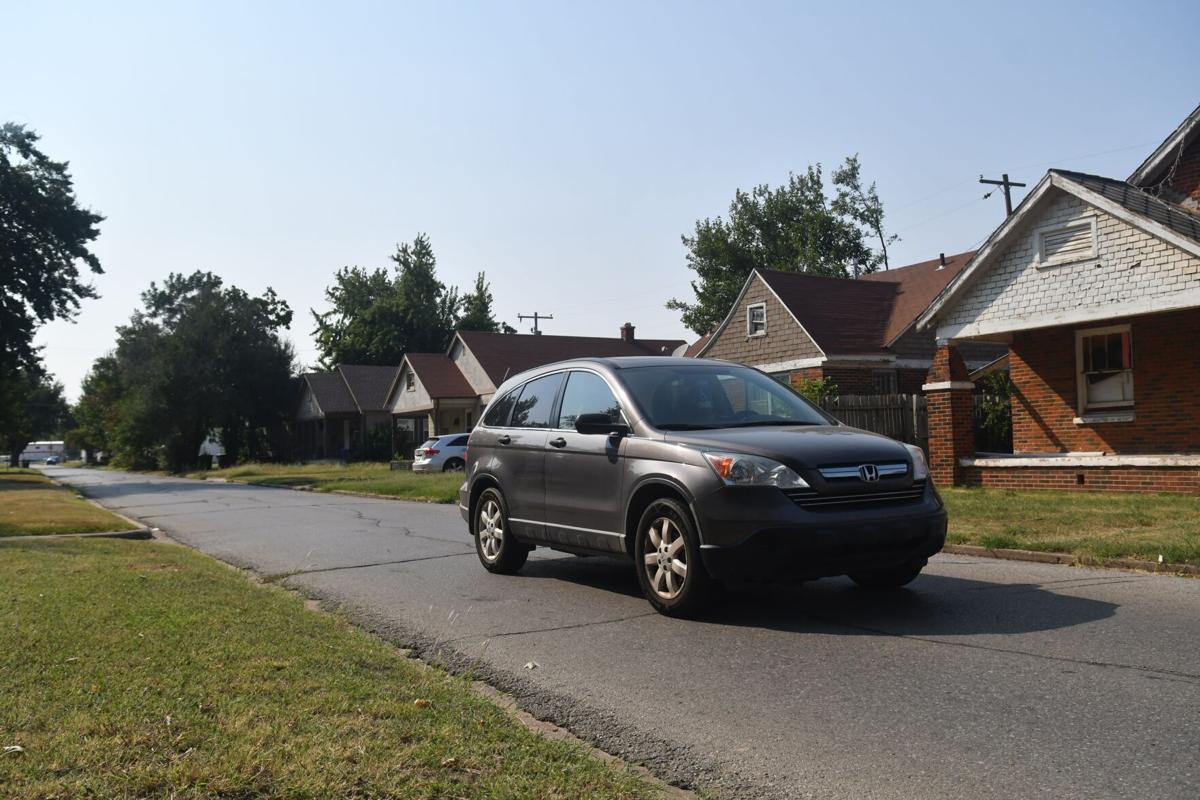 A car drives along West Randolph on Saturday, Sept. 11, 2021, past a house recently acquired by the city of Enid. (Alexander Ewald / Enid News & Eagle) 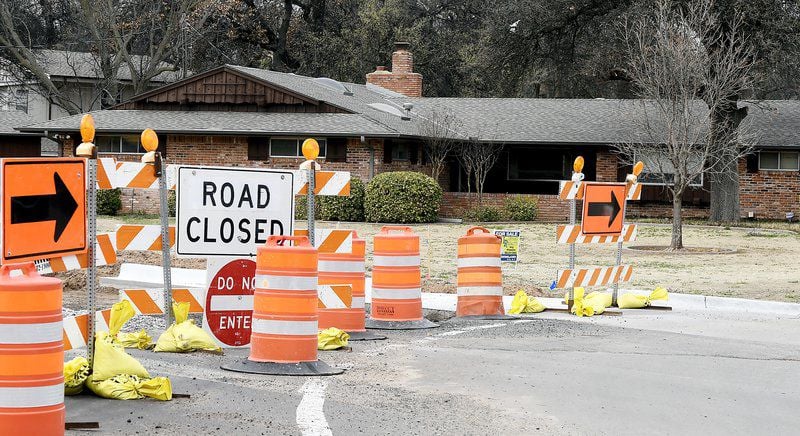 Detour signs appear on Willow in front of the residence at No. 1 Woodlands in March 2018. The city of Enid purchased the property to settle a lawsuit. (Bonnie Vculek / Enid News & Eagle)

This map from the Garfield County Assessor's website shows the properties owned by the city of Enid (shown in yellow) primarily on the median of West Randolph and James. The square in blue is the newest purchase, at 1614 W. Randolph. 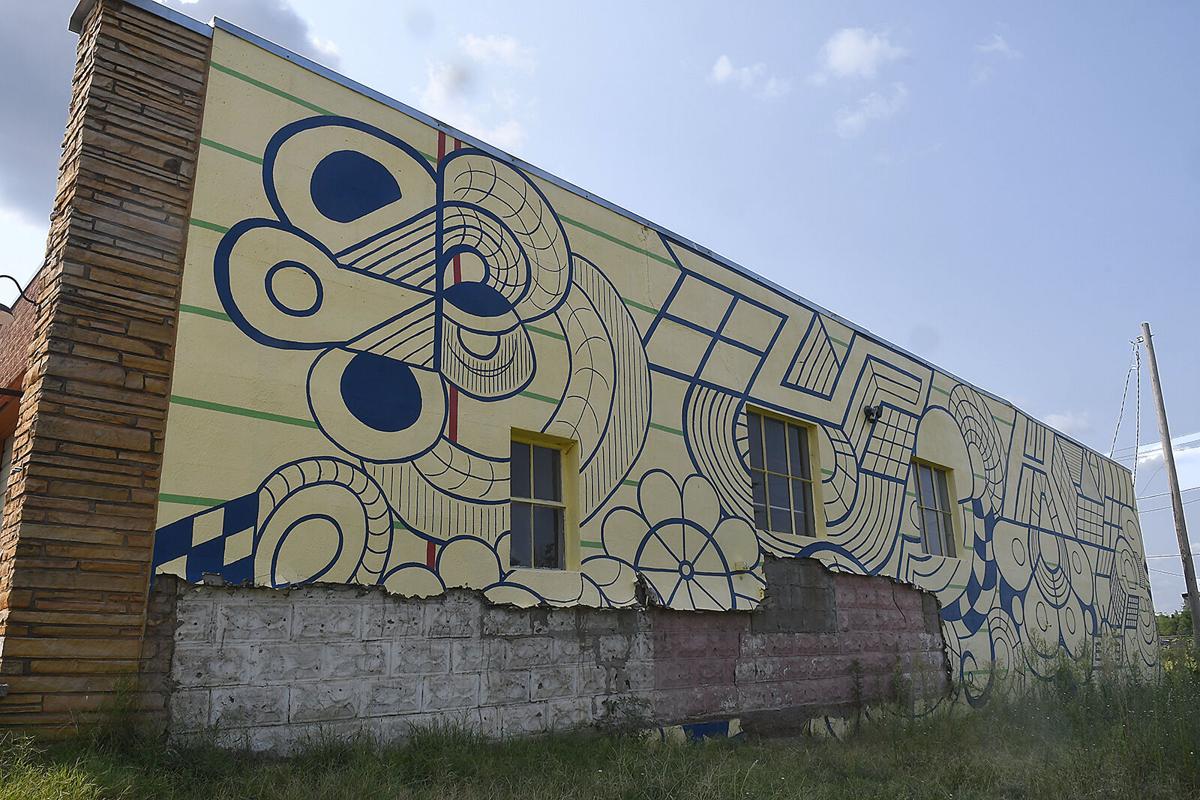 A building on east Randolph that was damaged by construction crews during road construction. (Billy Hefton / Enid News & Eagle) 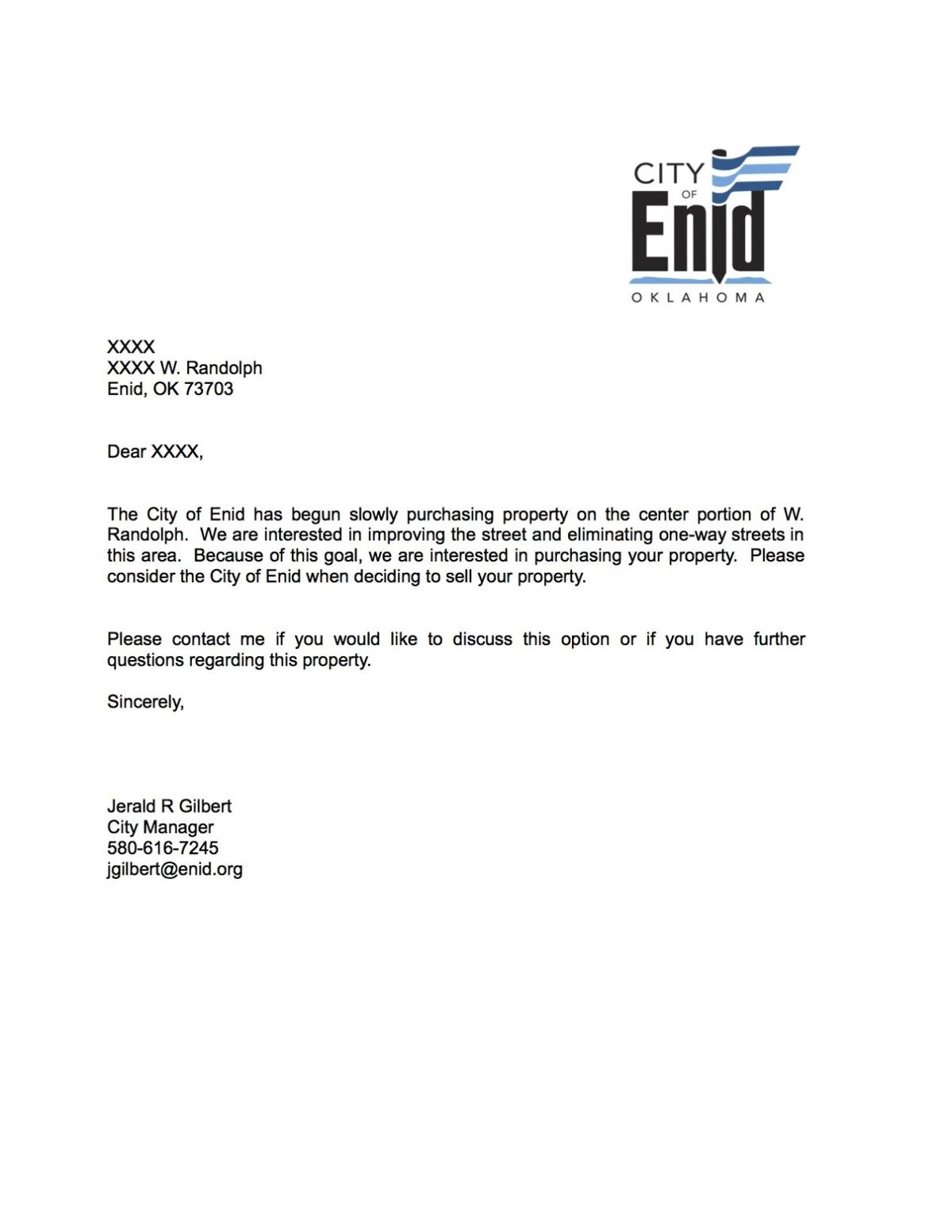 This sample letter of interest, obtained by an open records request, was sent to all property owners on the median of West Randolph.

ENID, Okla. — The city of Enid now owns at least one property on all but one of the seven blocks of the West Randolph-James median after purchasing another earlier this month.

City commissioners next Tuesday are set to approve a purchase claim of over $27,500 that was spent earlier this month acquiring another property on the median.

On Sept. 2, owner Denise Meloy sold her property at 1614 W. Randolph to the city — a one-story house built on a 1-acre lot in 1965, according to the Garfield County Assessor website.

According to the county assessor, Meloy had owned the property since 2007 when the deed was transferred to her from her father, Curtis Meloy Sr.

City officials have been interested in buying the properties on the center portion of West Randolph and James for the past several years, intent on improving the area and eliminating its one-way streets.

Officials intend to demolish all the structures located on the median, but have said they’re unsure whether the street would also be widened to four lanes.

For the last three years, the city of Enid has quietly been acquiring, then clearing, more of the properties sitting on the median, in hopes of widening the often-used street for through traffic.

With over a dozen properties now acquired for the long-planned road expansion, the city says no plans are in the works to invoke eminent domain through the often sticky court process of condemnation hearings.

The city has so far spent roughly $90,000 acquiring six properties in 2021, according to open records-requested costs, as well as city of Enid department purchase claims that partly take into account appraisal and title company fees.

These costs don’t include demolition claims from the last year and a half totaling at least $19,000 for work clearing nearly all the properties.

The city owns 13 of the roughly 40 houses that sit on the median between Van Buren and the railroad tracks.

All but two were purchased in the last three years, for costs ranging from $5,000 to $38,000 that the city says were determined according to fair market value.

Time not of the essenceWhen Valentin Alatorre bought an empty lot located on the 1200 block of West Randolph at a tax auction in 2014, he said he wanted to put an ice cream and lemonade stand on it for his daughter, Nyomi, to operate.

However, rezoning attempts failed, and Alatorre spent the next seven years mowing the grass every two or three weeks before a letter came from the city of Enid showing interest in buying the property.

Earlier this year, a letter signed by City Manager Jerald Gilbert was mailed to all residents on the block, including Alatorre, asking them to consider the city of Enid whenever they decide to sell their properties.

In January, Assistant City Manager Scott Morris said these letters were sent before the Enid City Commission approved an additional $250,000 to the city’s Capital Replacement Department, funds meant to supplement property purchases on West Randolph for the rest of the fiscal year.

A 200% budget increase to the city’s Capital Replacement Department further supplemented its purchase funds for the current 2022 fiscal year.

Alatorre sold the property in May this year for $5,000 “and some change” from the city — well above the public market value for the property — in exchange for the deed, after negotiating down from the $8,000 he offered in a phone call to the city manager.

Alatorre said the agreement was mutual, but added he decided selling now rather than later was a better option.

“Instead of trying to argue with (Gilbert) whether or not sell it, it wouldn’t be logical for me to not sell it to them when they could just take it whenever they felt like,” he said. “That’s the government. They got deep pockets. No one’s got deeper pockets than them.”

Morris said in January that the city didn’t plan to use eminent domain over the Randolph properties — the court-approved municipal authority to acquire private property, with just compensation, for the benefit of a public project such as infrastructure work.

Gilbert said Friday that the city has no intent of uprooting anybody living on the median at this point.

The project is around five years off, he said, so time isn’t of the essence.

Indeed, none of the properties’ now-former owners have been named in condemnation hearings — the first step in requesting eminent domain under Oklahoma state statute — from suits filed by the city of Enid in Garfield County District Court.

“We are not contemplating condemnations at this point, because this project is a long-term project,” Gilbert said. “(But) somewhere down the road, where’d we have to go condemnation, yes (that could happen).

‘The big middle part’Ben Ezzell, whose building was damaged by the city during road work elsewhere on Randolph, settled with the city last month rather than move forward with a condemnation hearing in county court.

After months of talks and approval from Enid City Commission two weeks ago, Ezzell and his wife received a total $150,000 from the city to buy his three lots.

Mayor George Pankonin said the city of Enid now intends to demolish the building, located on a FEMA-regulated flood plain at 324 and 328 E. Randolph, to maintain the storm-water structure underneath.

Demolition was the only legal option. Substantial improvement — or work done equal to 50% of a structure’s market value — to structures located on a flood plain is prohibited by federal law, according to the city.

The buildings, which feature a now-partially destroyed mural, have since been vacated, while the city has since resumed work on the Boggy Creek Bridge area in front of the property.

Ezzell, saying his law firm has represented parties on both sides of condemnation hearings, said the city has a bad track record of coming out of cases without having to pay a lot.

“(Condemnation) can turn into this time-consuming, big, expensive mess, and it’s best avoided for everyone,” he said. “So if the city and the property owner can make a deal that skips the big middle part, it benefits everyone.”

Under state statute, landowners are entitled to just compensation if their property is claimed for eminent domain, and their land cannot be taken solely for economic development.

If a property owner doesn’t accept an initial offer by the appraiser, then the city will acquire easements by condemnation. After the city files a petition in district court, a judge will appoint with 10 days’ notice three special, independent appraisers to determine how much money the property owner should be paid as compensation.

After the report is filed, either the property owner or the city can demand a jury trial within 60 days of the filing if they believe the appraisal isn’t correct. If that happens, then a jury will decide on just compensation.

Gilbert said he was not aware of any condemnations going to jury trial during his nearly eight-year tenure as city manager.

Since February 2020, the city of Enid has petitioned the district court in four condemnation hearings to acquire perpetual or temporary easements through eminent domain from county residents for the city’s long-term Kaw Lake Water Program.

The eight-segment pipeline from Kaw Lake is set to cross four county lines, as well as through railroad and utility right-of-ways and eventually private properties. The city needs 230 total easements for the pipeline and another 30 for a connected water main along Chestnut in Enid.

As of September, the city has paid just compensation for three of these four cases, totaling about $55,000.

Over $2.7 million was estimated for a fourth ongoing case as just compensation, which the city has not yet paid. Appraisers determined these costs from a 20-year lease the property owner had with a solar farm company, which was lost due to the lawsuit filed by the city of Enid.

The city has filed procedural demands for jury trial for this case and two of the three others.

Gilbert referred comments on ongoing Kaw Lake condemnations to City Attorney Carol Lahman, who was out of the office Friday.

Past road blocksThe city of Enid has previously embarked on a road-widening project that also called for acquiring properties through eminent domain.

While talks began 10 years ago to widen Willow from Cleveland to Oakwood from two lanes to four, later several legal hurdles resulted in over five more years in delays before work began in 2018.

One was later dismissed by the city, while two property owners respectively received compensation for $78,000 and $30,000.

A third owner settled with the city out of court in 2015, after appraisers recommended $53,000 in compensation. Instead, the city would design and build a wall.

Three years later, city commissioners voted to also purchase the entire property from the trustee of the late Dean Bomholt for $247,900. The house was then put on the market.

In 2008, widening both Willow and the median area of Randolph had also been part of a $39 million bond package proposal, with 70% of the funds specified for street repairs, as is required by state law.

That March, however, voters resoundingly rejected the 70% portion of the proposal, including widening the two arterial streets.

Alatorre, the former property owner, remembered when citizens voted not to let the city expand those roads — but the city moved ahead years later with both projects.

“They constantly have us vote on things, but then they do it anyways, on their own terms,” he said. “The city’s going to do whatever they want.”