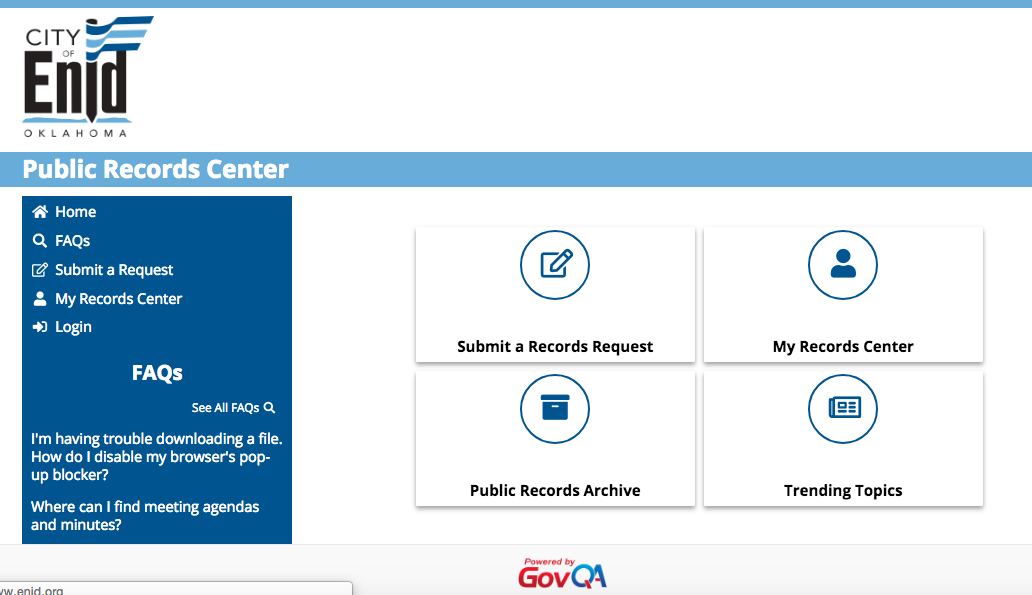 This screenshot shows the city of Enid and Enid Police Depart-ment’s new, shared online open records request system, provided by management software GovQA. Anyone with an email address can sign up for an account to make, review or search for records requests. (Alexander Ewald / Enid News & Eagle) 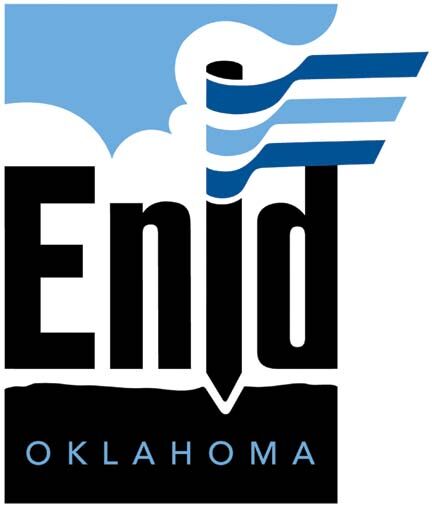 ENID, Okla. — The city of Enid and Enid Police Department will transition next week to a new, shared online system for members of the public and the media to request open records.

On Monday, the city will go live with GovQA, a self-serve public records management software through which citizens can submit open records requests on forms tailored for either of the two public bodies.

The portal also allows the public to track current or past records requests, search through request archives and look at trends for requests.

A link to the portal will be posted Monday on the city of Enid’s and the Enid Police Department’s respective websites, according to an EPD press release from Friday.

However, the city’s direct public records center site is currently live for accounts to already be created and requests to be submitted.

According to the release, the city and EPD looked to the new GovQA system as the volume and complexity of requests has grown for public records and information such as electronic documents, videos and audio files.

Officials of both public bodies say the change will streamline the process long meant to encourage government transparency.

The system is, according to EPD, meant to reduce paperwork and free up staff time to work on other important business.

“This system will allow residents of Enid and others further access to the documents and files we keep,” Capt. Ryan Singleton said in the release. “We are committed to being transparent, and this new system will help us toward that goal.”

City Manager Jerald Gilbert said he thinks the new system will be a better way to manage and track requests.

“Anybody can request open records,” Gilbert said. “Your local government is transparent, and certainly our documents and our open meetings are going to follow the law.”

Records can be requested on the system after a user creates an online account. Requesters can receive documents electronically through the portal, to inspect on-site and/or to pick up in-person.

Users of the portal do not have to identify the exact record they want, but as much detail as possible is encouraged, and city staff may assist in clarifying requests.

Pursuant to the Oklahoma Open Records Act, the city of Enid will charge a fee of $0.25 per printed page for 8½-by-14-inch pages for records released. Larger pages, photographs, compact discs and other forms of media released may result in larger fees for reproduction, according to the city. A request being made for commercial purposes, as defined under state statute, may result in an additional research fee.

According to the same state law, “in no case shall a search fee be charged when the release of records is in the public interest, including, but not limited to, release to the news media, scholars, authors and taxpayers seeking to determine whether those entrusted with the affairs of the government are honestly, faithfully, and competently performing their duties as public servants.”

People previously would submit records requests to the city of Enid by filling out a request form PDF available on the city of Enid website or city clerk’s office, then submitting it to Vanessa Burchardt with the city attorney’s office.

Gilbert said Burchardt would continue to oversee the new system on the city’s side.

Welcome to Custer County, Okla., where emailing a public record is apparently a burden for the local sheriff’s office.