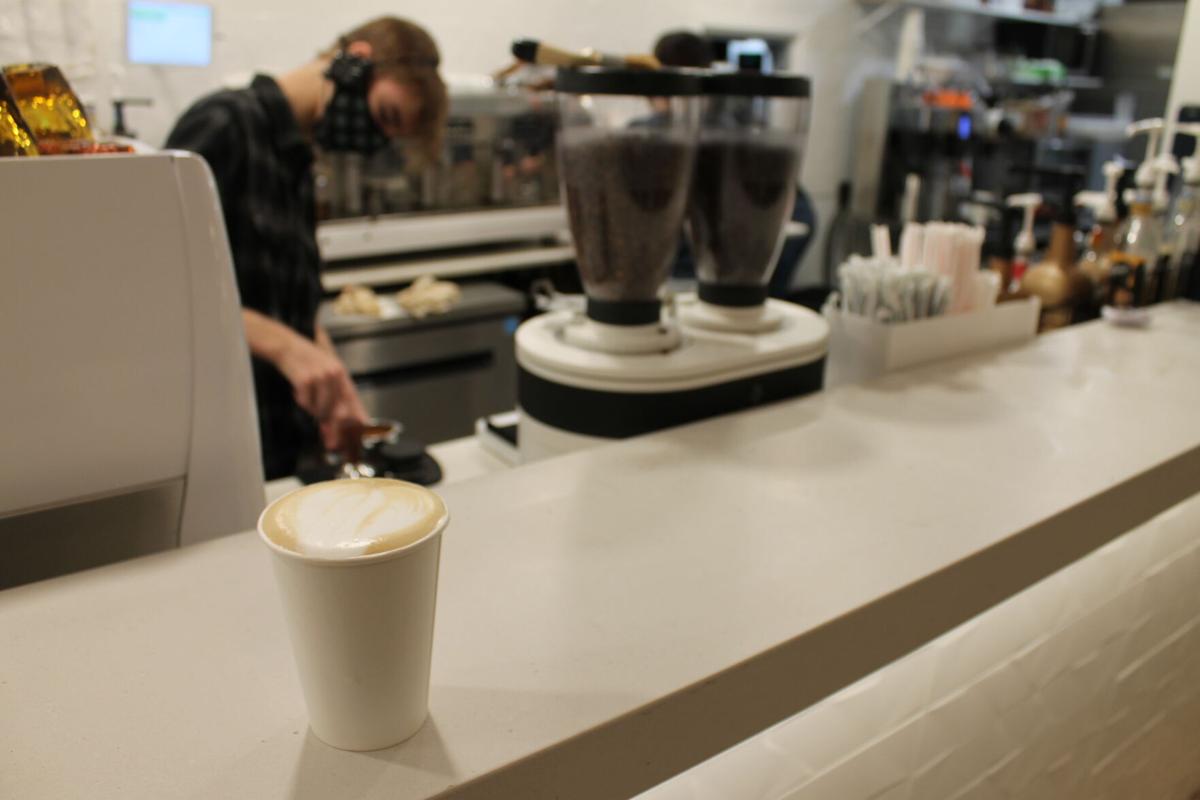 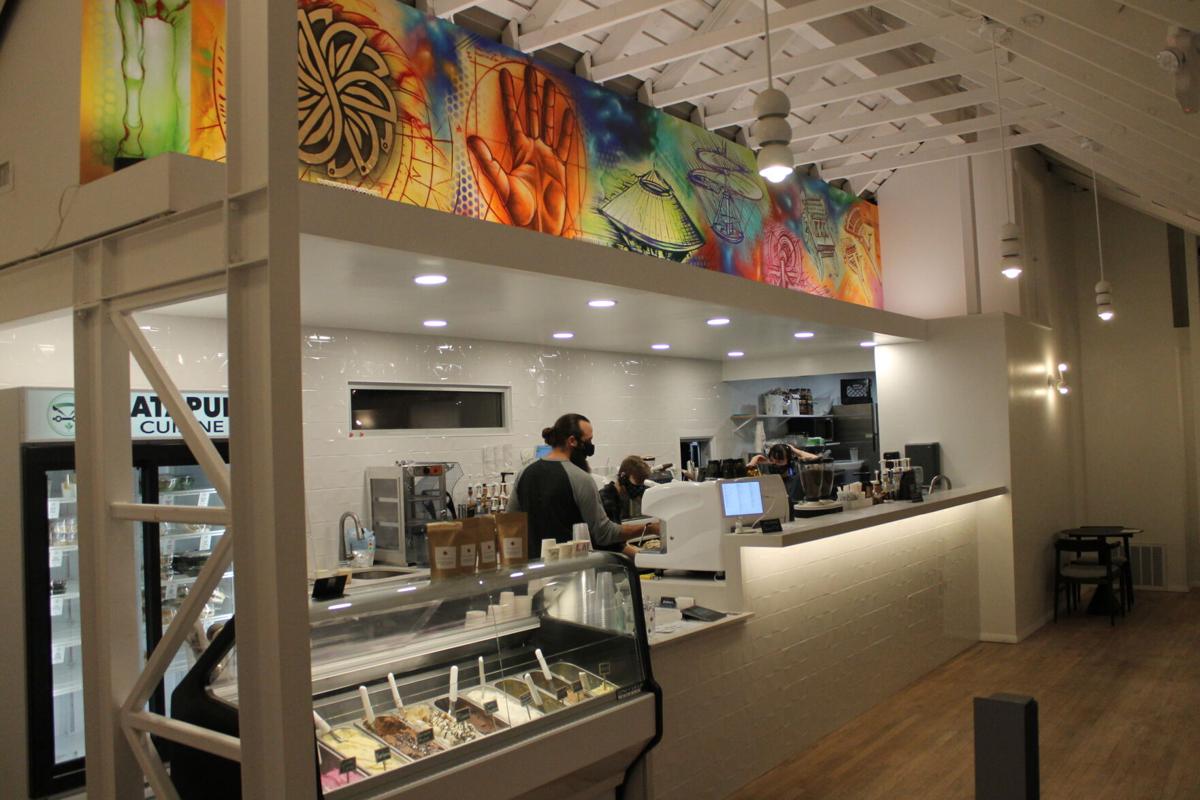 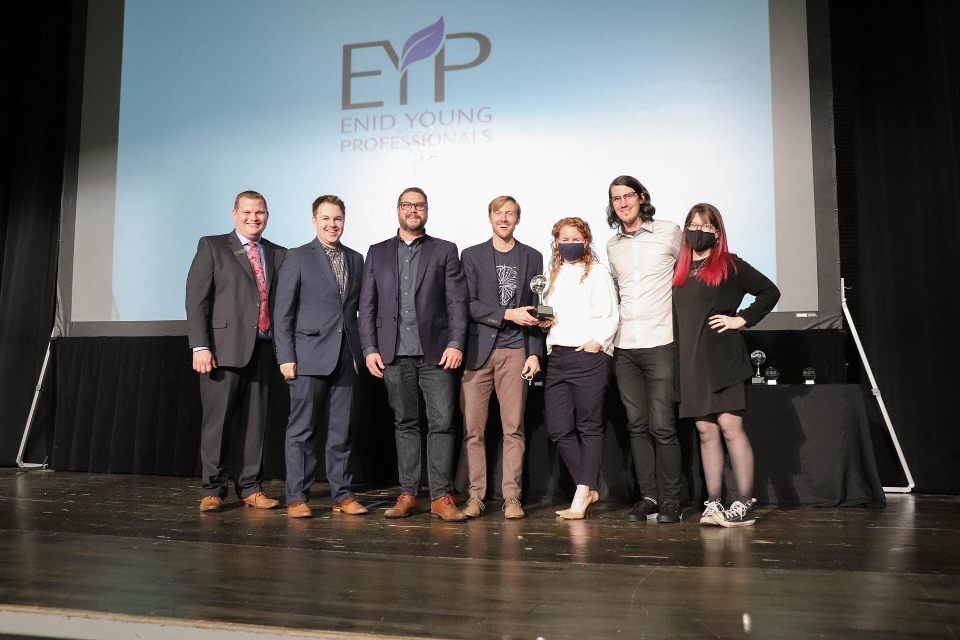 ENID, Okla. — After three years rezoning a house meant to be a new coffeehouse in Enid, Nick Jackson spent another renovating and lightening the wood inside to as white as he could get it.

The walls are also painted white, the ceilings are white and the counters are white.

“Leonardo da Vinci was an artist. So Central is the canvas,” Jackson said of the newly opened Da Vinci’s Coffeehouse and Gelateria location, at 525 S. Arthur.

To fill part of that canvas, local artist Tox painted a 4-foot-high mural spanning 26 feet over the counter that includes the Italian polymath’s drawing of the colossus, a 24-foot bronze horse statue he was commissioned to build but never completed.

The mural also includes a hand in the style of da Vinci’s iconic Vitruvian Man sketch, his sketch of an armored car war machine and lastly, his design of a perpetual motion machine.

Once you spin that machine, it theoretically should go forever.

Jackson said that’s why the machine is the logo of the longtime Enid coffeehouse chain, which he owns with several other Enid residents who have a special love for community, art and coffee.

“So we want to just keep turning,” Jackson said. “We want to make coffee, we want to be creators and artists, and we’re inspired to create masterpieces.”

The fourth Da Vinci’s location to open in two years, Da Vinci’s Central opened for business a week ago on Nov. 14 without much prior fanfare online.

Head barista Ben Burleigh said after severals weeks training staff, all they did was turn on the lights, unlock the doors and open the drive-through window.

The next two days saw record sales, Burleigh said, despite the COVID-19 situation that has seen spiking cases over the last month in Enid as well as the rest of the state.

“Enid has really stepped up to support local, and not just us; our local businesses have seen huge support (since the pandemic),” he said.

All employees wear masks (and were given masks embroidered with the Da Vinci’s logo). Customers are also encouraged to wear masks with disposable ones offered at the door. While indoor seating is still available as of Saturday, furniture has been rearranged to provide for social distancing, and employees clean down surfaces every hour and once customers leave the shop.

Jackson said while he has a palette for coffee and has handled the construction and acquisitions, he most cares about the coffeehouse being this “third place” for customers outside of work and home.

He bought into Da Vinci’s in 2014 shortly after Burleigh, who trains employees and oversees the coffee-making, while fellow co-owner Corey Keller organizes finances and product orders. Also a co-owner, Blake Stevison is a business partner with Chad Easton in Vitruvian Coffee Roasters, an affiliate of Da Vinci’s located in Enid.

Burleigh and Keller initially served as store managers, but were able to establish the two locations with their own management teams, Burleigh said.

“None of us are corporate. We’re all just regular guys working our butts off to do something because we’re passionate about it,” he said.

Far from its days in Enlightenment-era Europe as a simple cup of black roast with no cream or sugar, coffee now comes in every size, shape and flavor. Da Vinci’s currently offers around 77 different flavors to add to drinks, its most popular two being its historical namesake and his most famous work, “The Mona Lisa.”

Burleigh, who said he’s been “in coffee” since 2013, said locally owned, mom-and-pop stores have been “exploding” in the last five to 10 years. These so-called “Schools of the Wise” work with farms of local origin, he said, bypassing the traditionally corporate entities that have dominated the industry for decades.

At Vitruvian, at 911 W. Broadway, staffers roast the greens from a service provider into the beans. Each bean then gets its own attention to magnify the flavor, meaning every coffee is roasted in Enid.

“Each coffee bean has its own characteristic, so we specifically roast it for each bean,” Burleigh said.

And like every coffee they serve, each Da Vinci’s location has its own personality.

“We let each store be its own living, breathing thing,” Burleigh said. “Coffee is a community-based beverage, and it’s all about relationships, it’s all about personality.”

Da Vinci’s’ ownership team on Nov. 12 received the Vibrant Visionary Award for their work from Enid Young Professionals. Jackson said he’s wont to call himself the “visionary” of the group and was especially honored to be recognized for the group’s work.

“Someone else called me that, not just me!” Jackson said. “We just want to be that catalyst for the development and growth of that craft culture of Enid.”

A chance to breathe

A quick succession of events in the last two years has quadrupled the company’s size and number of employees, Jackson said.

While Da Vinci’s has been in business since 2003, the company has seen a rapid growth since the four went into business together, along with Jackson’s wife, Maggie, who designed the central and south locations, as well as at Vitruvian.

Initial expansion plans began in 2016 when the Da Vinci’s company rebranded and remodeled its original location in Willow Plaza. Authentic Italian gelato — not “gelato ice cream,” Jackson says — was then added. Gelato chef Jamie Melvin makes it in-house with base products and distributes them to the three off-base stores.

“We let each store be its own living, breathing thing. Coffee is a community-based beverage, and it’s all about relationships, it’s all about personality.”

The company also purchased the South Arthur house four years ago as a future second location. But for three years, Jackson worked through red tape to rezone it from residential to commercial, eventually taking the case to court.

In the meantime, Vance Air Force Base approached the company on opening a location on base, which would have to include breakfast food. Da Vinci’s agreed, and Jackson developed the ready-to-go Catapult Cuisine with longtime Panevino chef Hesston Swenn. The Vance site opened in April 2019 and quickly grew to include lunch orders, too.

While waiting for the central location to be cleared, the company had bought the former Port Lugano building once Jackson said they realized how Italian the architectural design was.

The south location, at 813 S. Van Buren, opened a month later in May. It was the first to have a drive-through.

Then two months later, Jackson settled the court case on the Arthur property and spent another year tearing out the interior walls and other renovations.

With those three more locations, about 40-45 people now work for the company, he said. Rather than looking at a possible fifth, Jackson said he’s more focused on developing and hiring for Da Vinci’s’ affiliates, as well as working with creative partners such as Putnam Six bookstore.

“It was a mad rush to get where we were,” Jackson said, “and it wasn’t all on purpose … to do it all at once. And now I can breathe.”