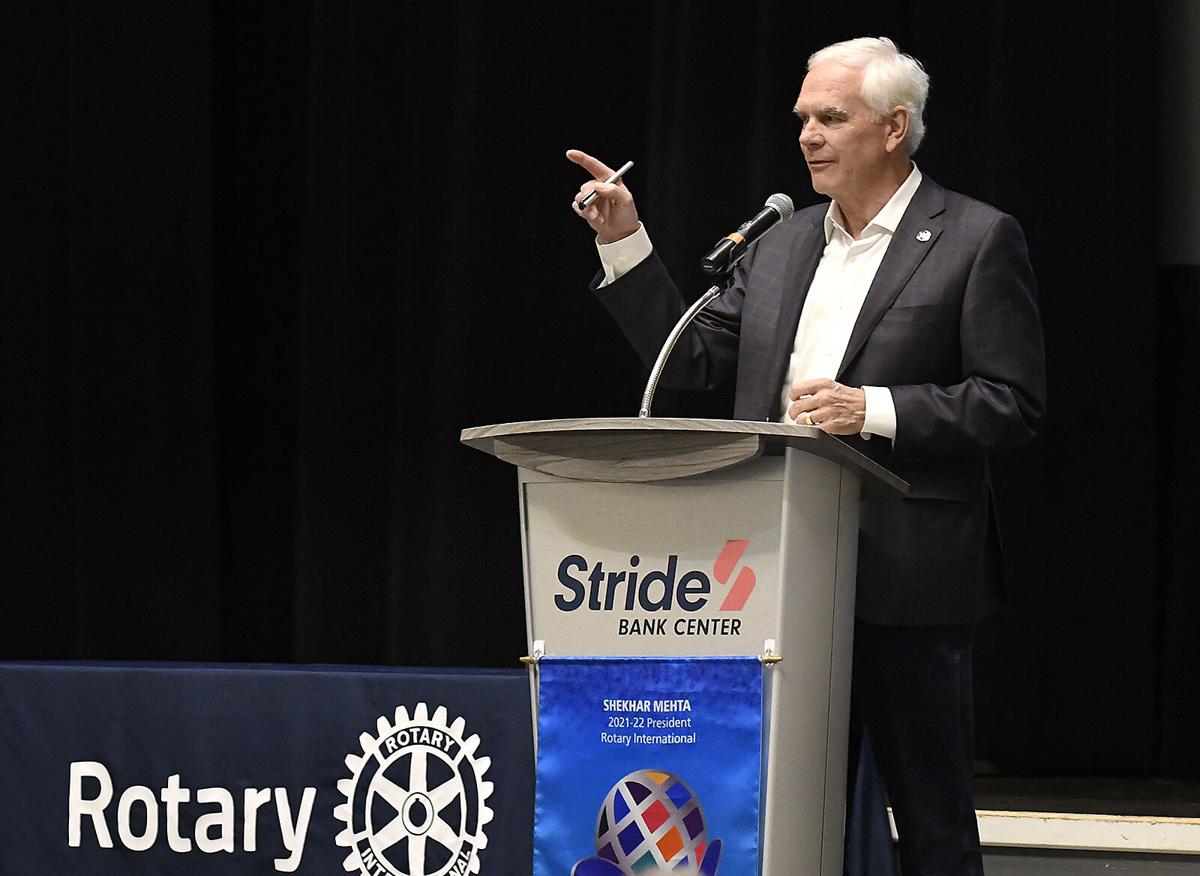 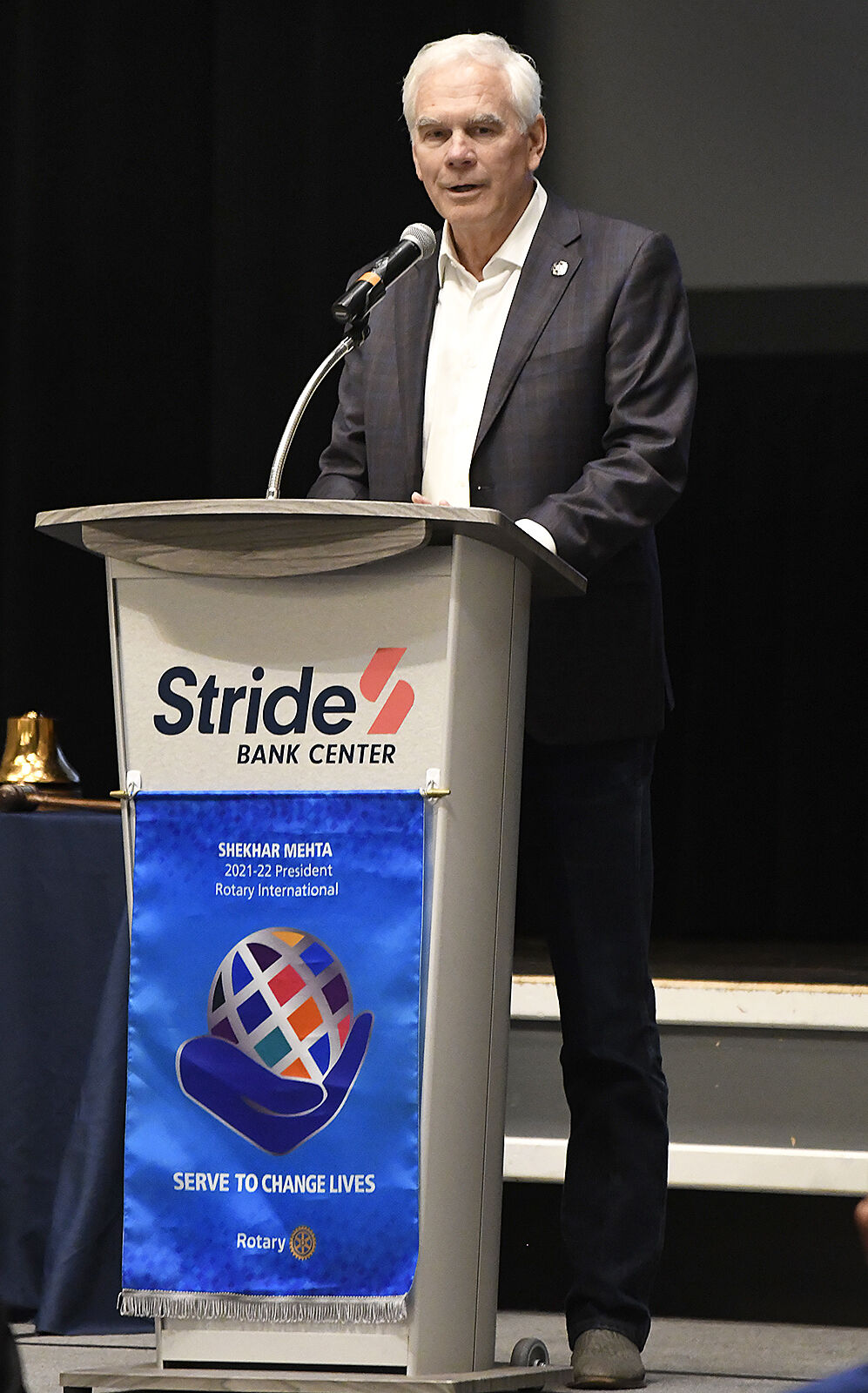 O’Connor, who has practiced law for more than 40 years and was appointed as Oklahoma’s 19th attorney general by Gov. Kevin Stitt on July 23, made his way to Enid to speak at the weekly Rotary Club meeting because he wanted to hear from community members.

“I’ll go anywhere I can, if my schedule allows it, to be with Rotarians,” said O’Connor, past president of the Rotary Club of Tulsa, which he joined in 1983. “Enid is such a great community, and I wanted to hear what’s important to Enid to make sure that I, as the attorney general, am thinking of the Enid area in terms of what I decide to do down in Oklahoma City.”

O’Connor spoke to Enid Rotarians about topics including his recent appointment as attorney general, Julius Jones’ case, the McGirt v. Oklahoma decision, abortion laws and the role of the federal government.

Stitt appointed O’Connor to the role following the resignation of former Attorney General Mike Hunter in May.

O’Connor said the past two and a half months as the attorney general have been “like whitewater-rafting.”

“It’s just been so crazy, and I’ve been privileged, really, to try to stand up for the individual freedoms that we’re trying to protect against the onslaught of the federal government,” O’Connor said.

O’Connor said “service above self” was one of the reasons he said “yes” to Stitt’s appointment, adding that he wants to leave he and his wife Lucia’s four children and 10 grandchildren a “nation that’s in better shape” than when he found it.

O’Connor said the people of the United States “gave a few rights” to the federal government, and the rest are for the states and individuals, adding that “every person should be trusted to make their own decisions for their health care” and children’s health care should be entrusted to their parents.

“In case you’re wondering, the federal government continues to try to be the boss in that triangle instead of being the servant of all, so my office is fighting that federal overreach — that attempt to take control,” O’Connor said.

The McGirt v. Oklahoma decision has turned Eastern Oklahoma upside-down, O’Connor said, adding that he is fighting to get the U.S. Supreme Court to either overturn the ruling or make a “very clear statement that McGirt does not have civil implications.”

“We just have to pray that the United States Supreme Court, now being a year wiser, corrects this decision,” he said.

When asked about any recommendations he has for Stitt on Julius Jones’ case, O’Connor said that it is “in no way a political decision, but a justice decision.”

In September, the Oklahoma Pardon and Parole Board recommended commutation for Jones, a 40-year-old death row inmate who was convicted in the 1999 slaying of Paul Howell and has maintained his innocence, according to The Associated Press.

Stitt said he would not make a decision on Jones’ case until after a clemency hearing, which, according to state law, is required to be held at least 21 days before a scheduled execution date.

O’Connor said the second piece of advice he gave Stitt was that the decision has to be made in light of the Howell family and the Jones family, not on the impact that this one case might have on other death row cases.

“I’ve read the evidence several times … and there’s no question in my mind of his guilt,” O’Connor said. “I support the death penalty, but only in the rarest of circumstances, and this is one of them.”

When asked about what he would recommend if a legislator sought his advice on potential changes in Oklahoma’s abortion laws and if abortion laws enacted in Texas and Mississippi will be found unconstitutional, O’Connor said that although he understands that some people hold different values, he believed life begins at conception.

“My advice would be, ‘Let’s just agree that life begins at conception, and let’s begin to treat our laws and our babies that way,’” O’Connor said.

O’Connor said whether he agrees or disagrees with a law passed by legislators and signed by the governor, it’s his job to defend that law.

“I believe in our system — that the people that elect the legislators and the governor, they enact the laws, and I enforce them,” he said.

“I believe the courts are not legislators. They were not elected by the people, generally, and even if they were, their job is to determine the constitutionality of a law or to try to interpret its meaning — not to become legislators themselves.”

The services celebrating and honoring the life of Charles Edwards are currently pending under the direction of Brown-Cummings Funeral Home.

The services celebrating and honoring the life of Jesse Van Housier are currently pending under the direction of Brown-Cummings Funeral Home.

The services celebrating and honoring the life of Donald Arnold are currently pending under the direction of Brown-Cummings Funeral Home.

The services celebrating and honoring the life of Gina Arkitau are currently pending under the direction of Brown-Cummings Funeral Home.